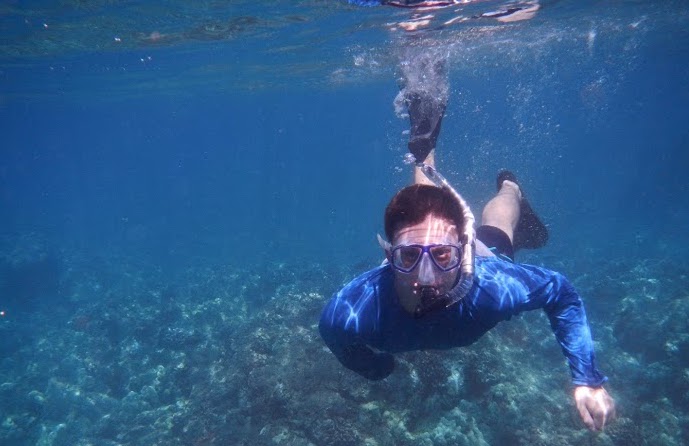 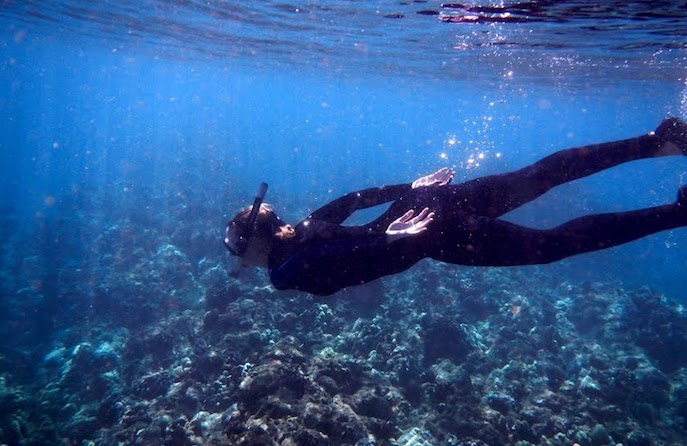 One of the experiences we’re most looking forward to over the next year is the chance to spend two days diving the Great Barrier Reef–but we got a pretty wonderful warm-up in Maui. Beyond the beaches and the luaus, Maui has many beautiful reefs that are easily accessible from public beaches and without the need to book a tour or have a boat. 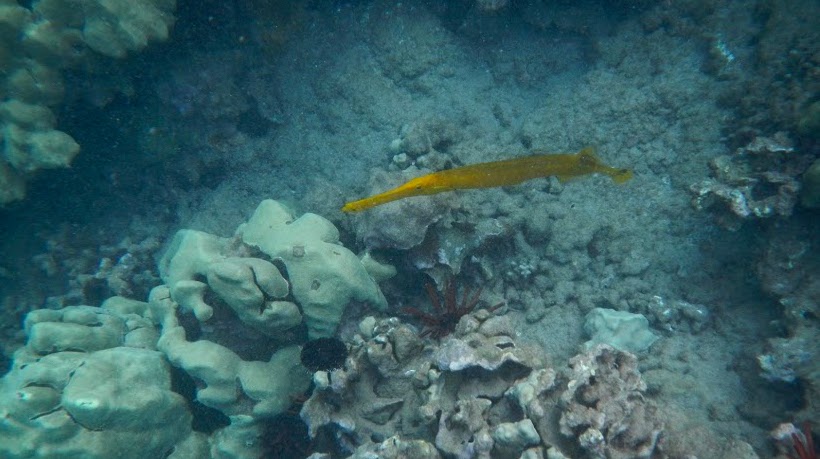 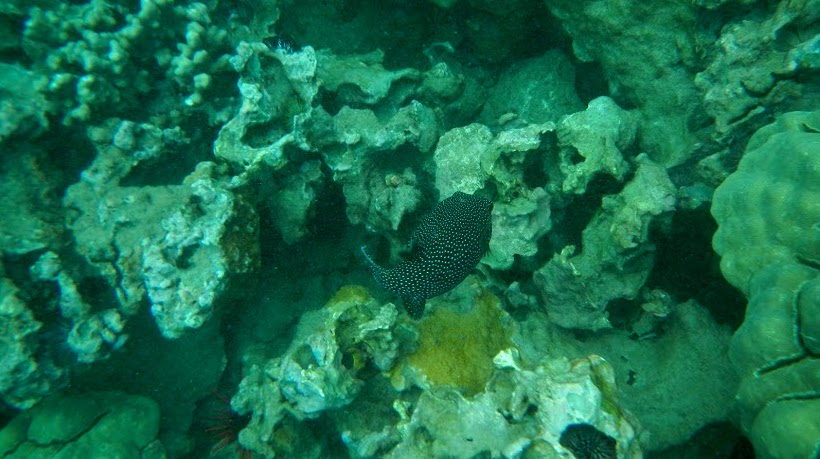 While we were in Maui for 12 days we went snorkeling almost every day. Even just swimming out from the beach in front of the condo where we stayed in Kihei, we could easily find interesting coral, colorful fish, anemones, and even sea turtles. 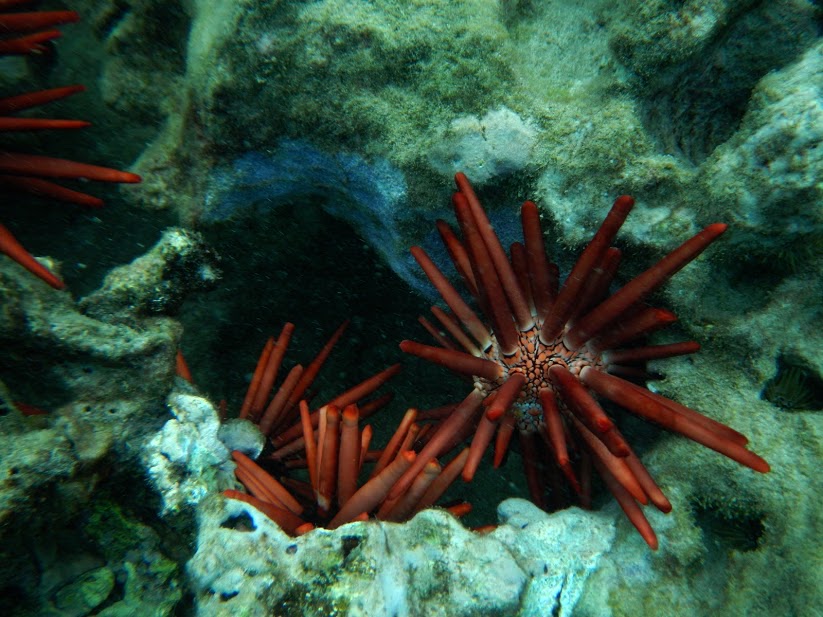 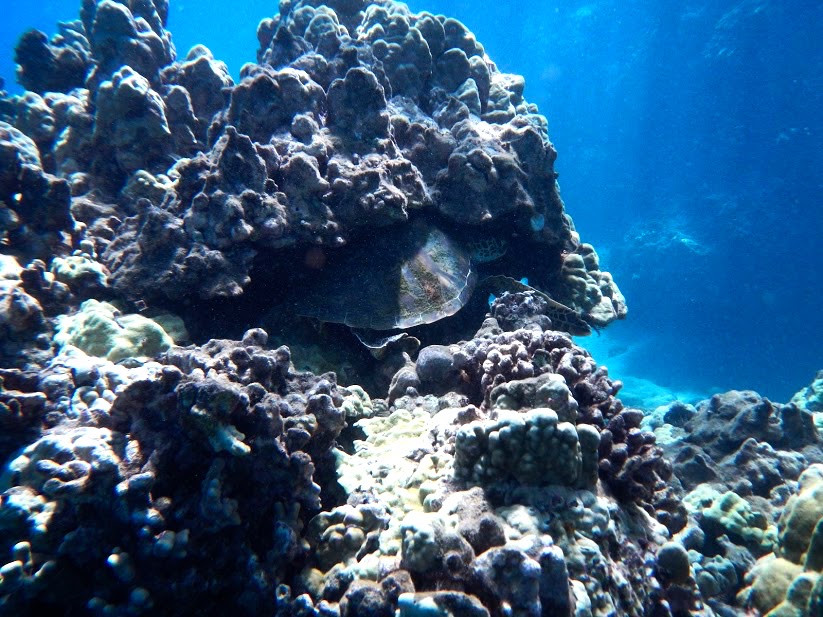 Only a 10 minute drive from the condo in Kihei, we were able to park at the beach at Ulua beach in Wailea to snorkel. The beach here is smaller than the roadside string in central Kihei but the reef goes out in a fan shape about 200 feet. There are portions that are quite shallow, to where I could have stood in chest deep to even ankle deep water on top of the reef but at the edge the face of the reef is probably around 20 feet with another 4-5 feet of water above that.

This was some of the best snorkeling we did the whole time we were in Maui. Going in the morning (before 11am) meant the water was clear and waves were small. By the time we came in, closer to 12:00 some of the visability was already reduced as the water became more choppy and stirred up sand. As it got later, we also had to share the reef with more people, so like most things in Maui, it’s better to get an early start.

In addition to a variety of tropical fish, we also got to see an octopus (my personal favorite), 4 turtles, and a manta ray (a rare occurence in Maui!). 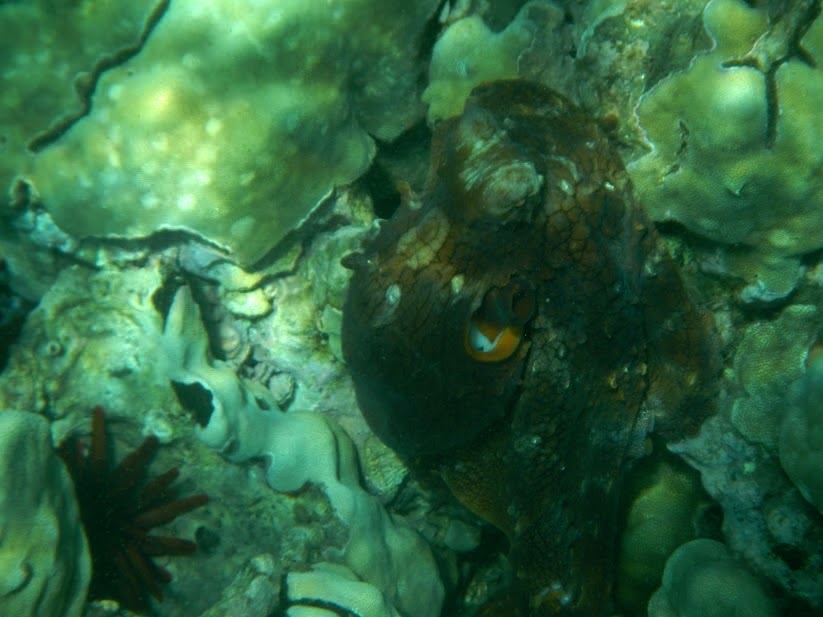 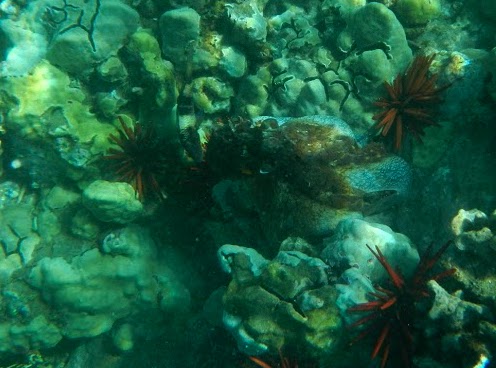 All those were in addition to the beautiful fish and the coral. We easily could have explored for a lot longer but after two hours of snorkeling we were pretty tired and had to call it quits for the day.

Our third snorkel location was off the coast of Honoapiilani Highway north west of Kihei. Driving along the coast, you get to mile marker 14 and there are plenty of places to pull off and park. When we were there, it was the weekend and several small groups were camping on the beach.

Once you are on the beach, it is gently sloped up until you start reaching the reef. The reef is quite shallow in many places but there are deeper channels scattered throughout where you can easily swim out into the reef. These will open up to deep canyons that are 20-30 feet deep with plenty of room for diving. We didn’t experience much swell while we were there but I could easily see it becoming a problem if you’re not paying attention. 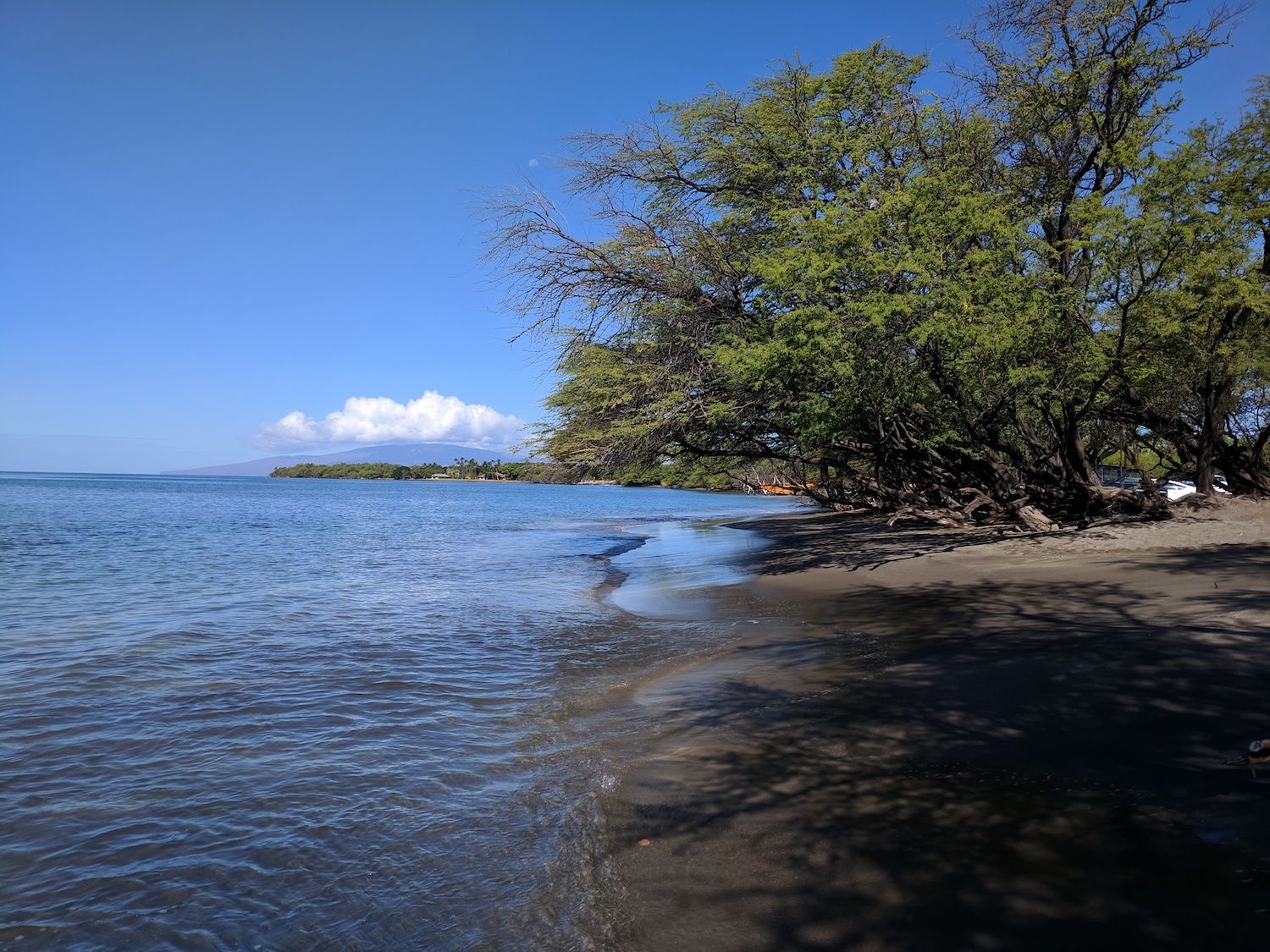 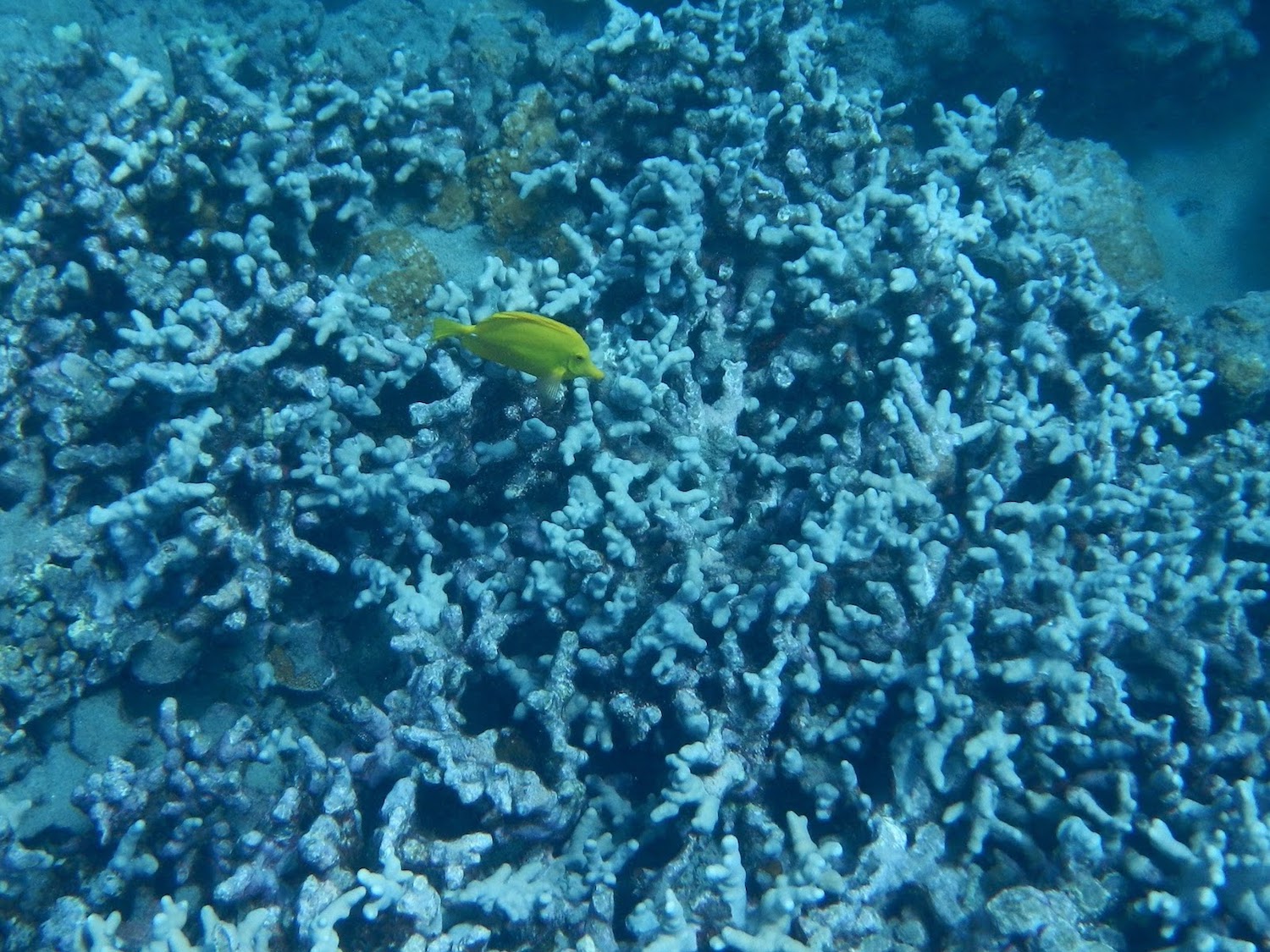 This reef, was much bigger than the others we visited going all the way out to about 3/4ths of a mile off shore. We just scratched the surface on our two hour snorkel trip but were rewarded for our efforts with plenty of fish and a few sea turtles, who were clearly less comfortable with tourists than the regularly visited turtles at the first reefs we visited. Instead of ignoring us, these turtles used evasive maneuvers and tried to keep us at a distance. This would be a great reef to visit over and over again, following different channels out on each trip. 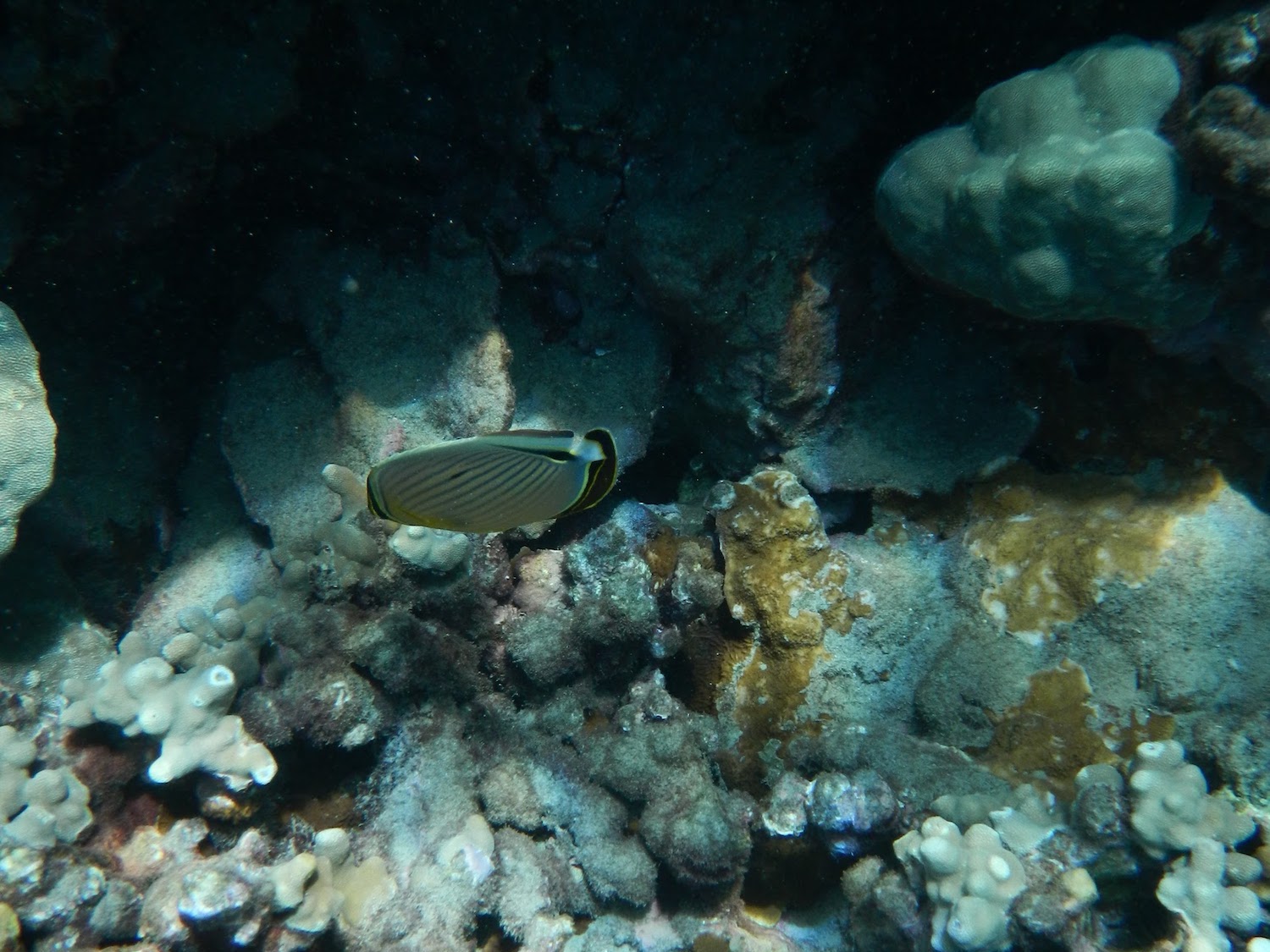 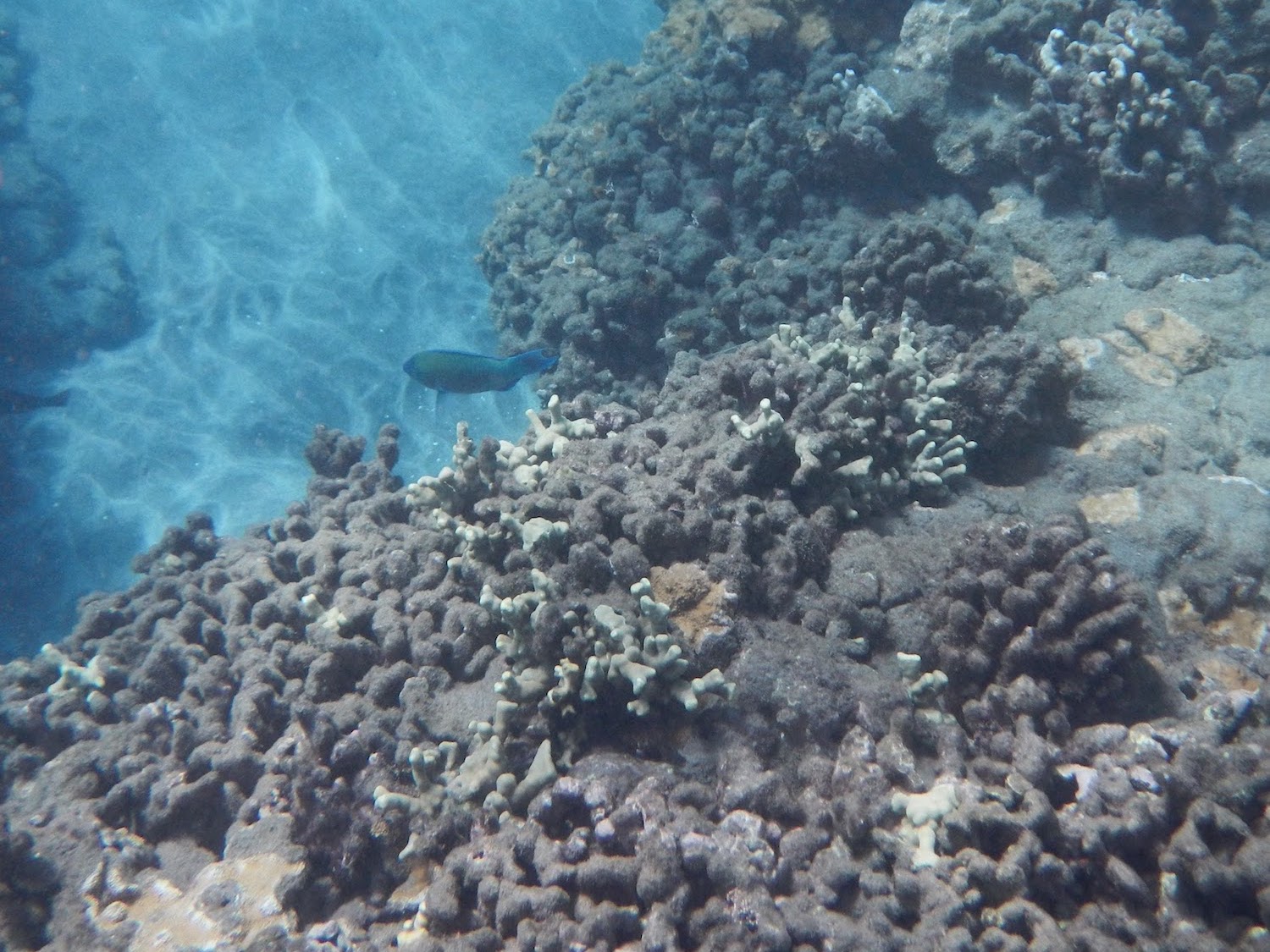 Honolua Bay is one of the more popular and better known snorkeling sites on Maui. When you arrive, parking will be limited. We got lucky and got one of the last spots in the parking lot at the trailhead that leads to the bay but others had parked on the sides of the road. Once you’re able to park, it is a 5 minute walk through a forest on a well-marked path. For some extra fun, you’ll get to see lots of chickens and roosters along the way, including some perched in trees.

At the end, the path opens up to a bay with a rocky coast (no sandy beaches here) with rocks, many football-sized, filling out a beach around the edge. We arrived relatively early, a little before 10am but when we arrived a couple of tour boats had already anchored and dropped off snorkel groups. This made it more crowded than the other places we visited but it didn’t ruin our experience.

The bay is less choppy than more open reefs with the cliffs around the perimeter to block the wind, which left the water clear and made the visability great. The water was colder than the shallow reefs near Kihei but there as a variety of shallow reef where you could barely float across the top and deep ravines that dropped 20-30 feet.

This trip was the highest concentration and most variety to fish we saw and our first encounter with eels! This was also the only location where we saw multiple large schools of fish and for the briefest moment we even caught a glimpse of dolphin fins at the mouth of the bay. 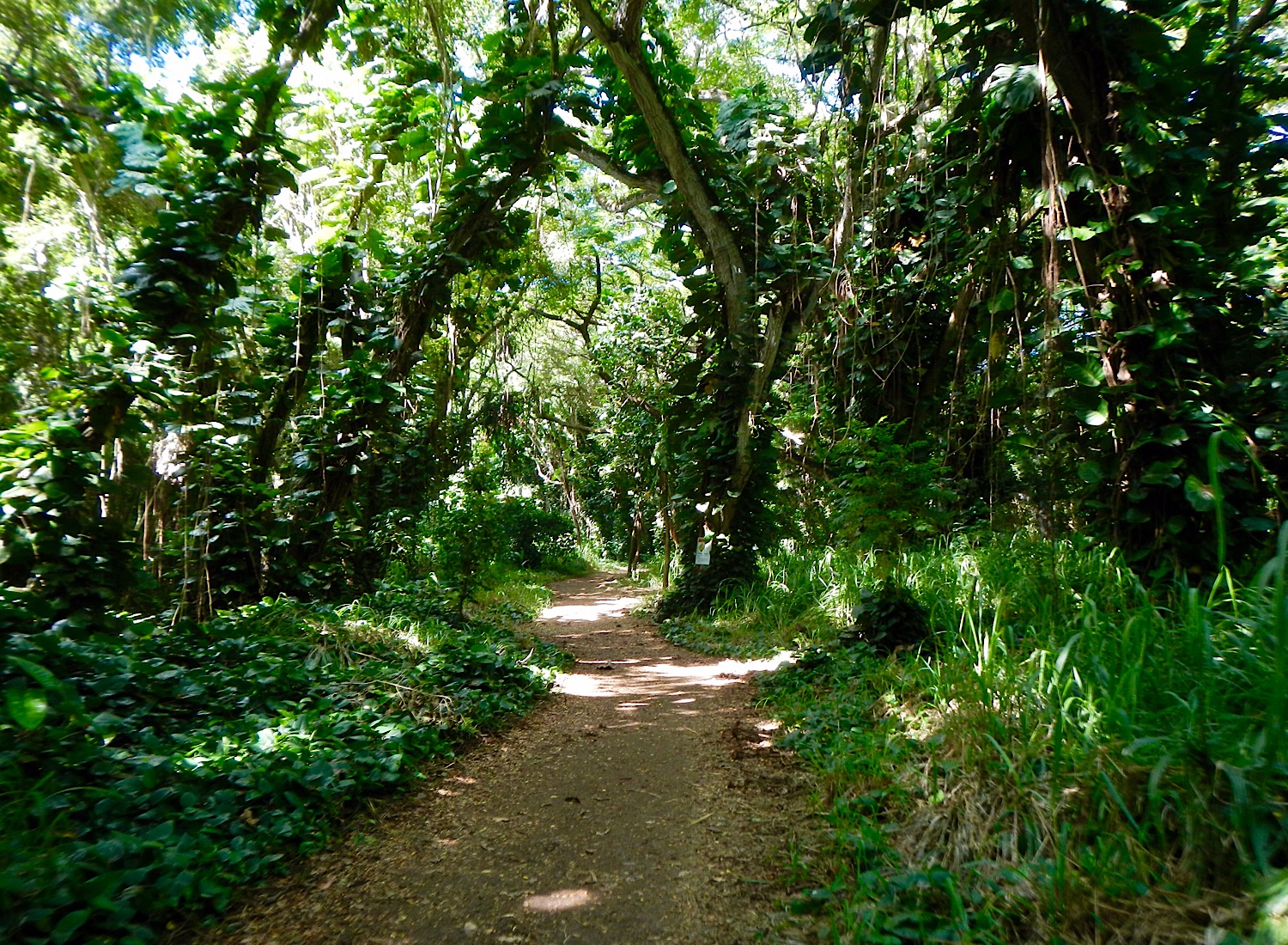 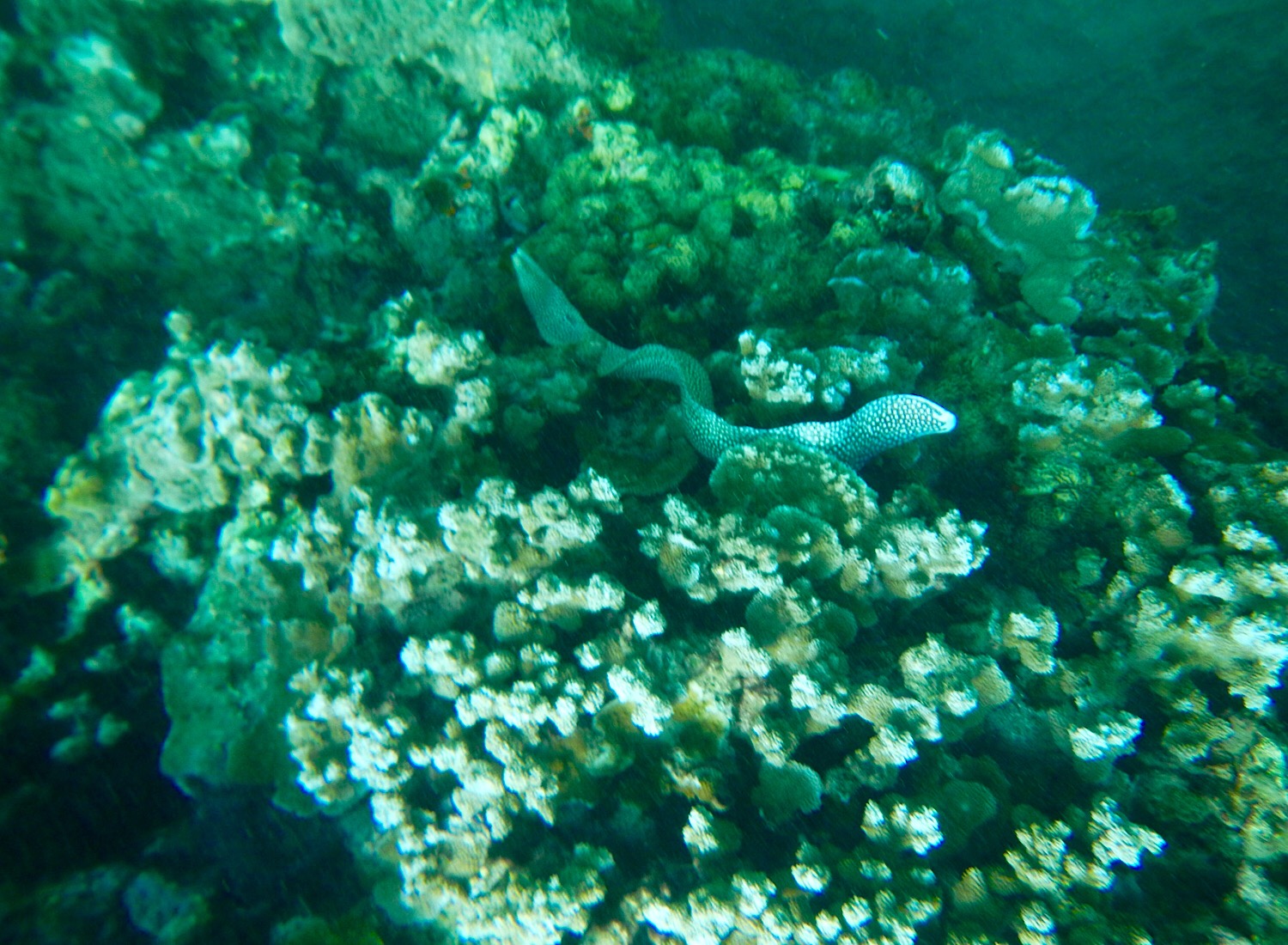 « Budgeting for a RTW Trip: How much does it cost?
Making a Haleakala sunrise visit happen - last minute »