Buenos Aires has felt like our most laid back destination to date. There is plenty to do in Buenos Aires but we didn’t need to pack several attractions or activities into each day. We also spent a lot of time eating. Long lunches seem to be standard, nowhere we went were the staff at restaurants the least bit interested in hurrying us along. We took full advantage and tried as hard as we could not to let our American expectation of brisk service taint our experience.

The first week of our stay in Buenos Aires, we stayed in the San Telmo neighborhood. San Telmo is known as a more bohemian neighborhood in the city and is famous for the flea market that runs through it on Sundays. I had seen several people online recommending San Telmo as a place where porteños (people who are from Buenos Aires) live with great night life and cafe culture. Alternatively, there were several people warning about it being an unsafe neighborhood and to stick to the more posh Palermo. We decided to risk it and we are glad that we did. While I would definitely recommend watching out for pick-pockets at the tourist-heavy flea market, in general the neighborhood was very approachable and had a lot of character. 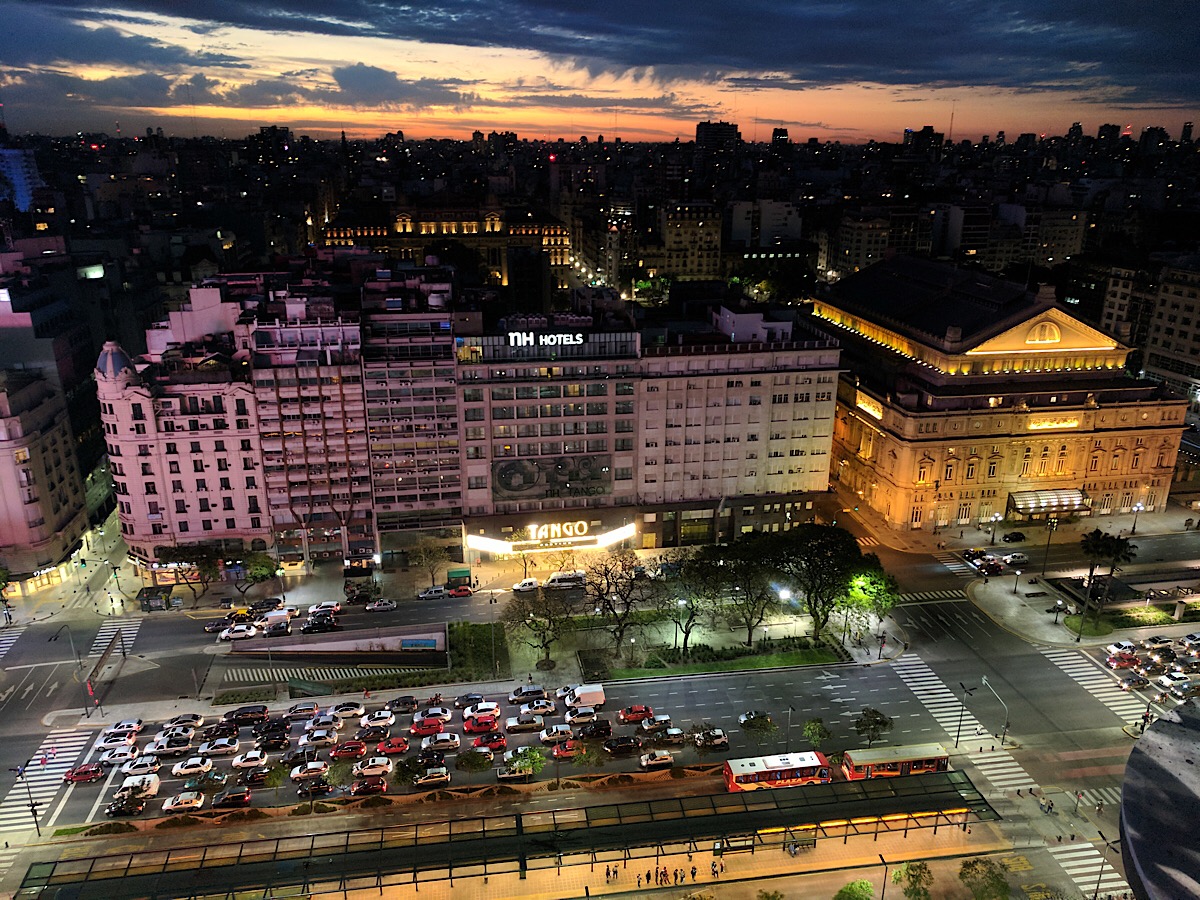 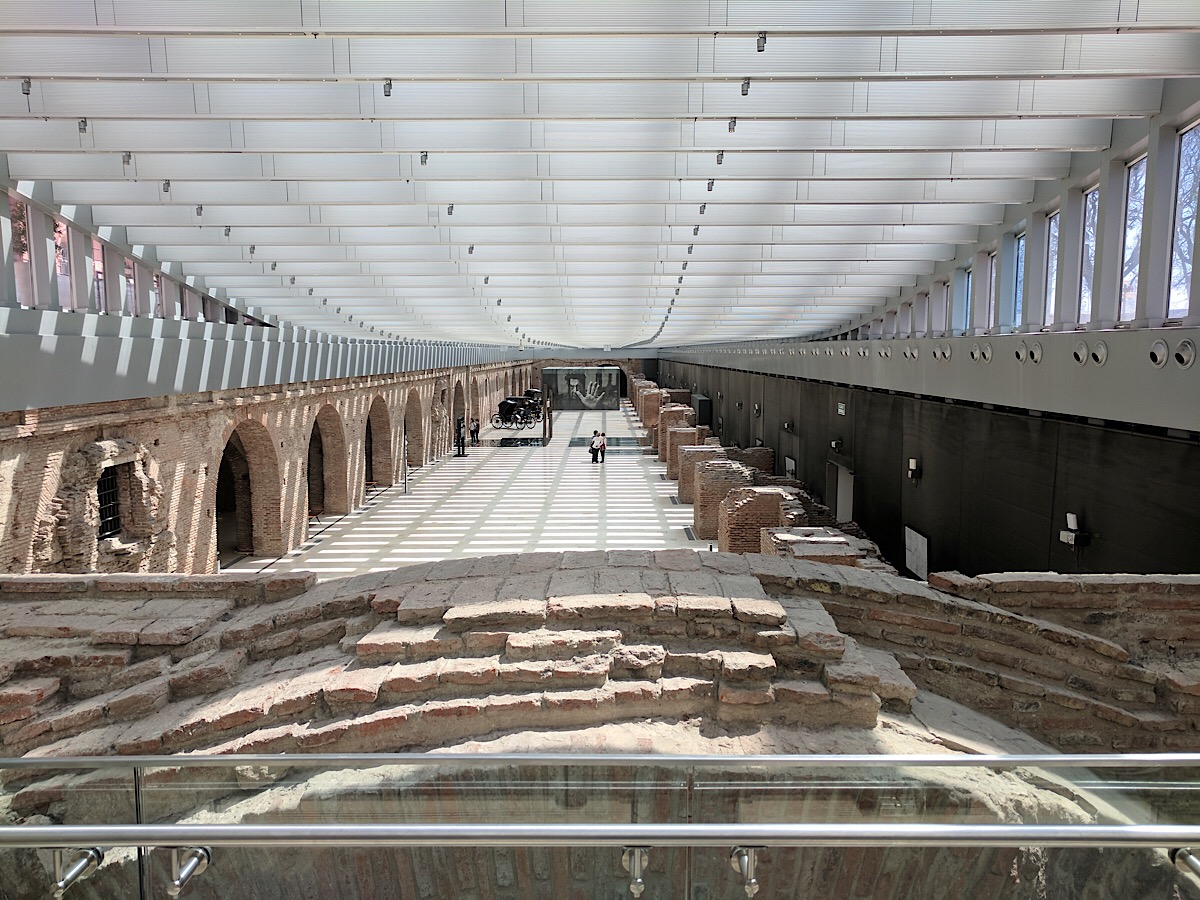 Day 1: We arrived and took an Uber to the Panamericano Hotel in downtown Buenos Aires. Since we landed so early in the day, Nate cashed in some hotel points that would otherwise expire soon for a night of luxury before we returned to our usual Airbnb lifestyle.

We dropped off our bags and spent a couple of hours having lunch and walking along Florida, a touristy shopping street where there are people exclaiming “CAMBIO!” at regular intervals. We learned that during the most recent economic collapse in Argentina, banks were not able to exchange pesos for dollars as inflation rose rapidly. As a result a thriving black market of money-changers developed and while it is no longer necessary today, they are apparently still going strong. From there, we made a quick trips around Casa Rosada until we were able to check-in.

The streets were oddly abandoned (except for the money-changers) for a Monday thanks to Loyalty Day, which commemorates the day that massive demonstrations resulted in the release of then-Colonel Juan Perón from prison, before his Presidency. The cult of Peron and Evita would come up again and again during our time in Buenos Aires, it is hard to overstate the effect these two seem to have had politics and life in the city.

Once we were able to check-in, the Panamericano did not disappoint. The room we stayed in was at least as big as our whole apartment in D.C. and came complete with a free-standing tub. Our room didn’t have a great view but from the indoor/outdoor pool area on the top floor we got an amazing view of the city and got to watch sunset from the comfort of the heated pool.

If that wasn’t enough, before we headed out with our backpacks the next morning, we were treated to an all inclusive breakfast that included the best crossiants I have ever had. At least that is what I believed at the time. The place of best crossiant (or medialuna) now goes to the cafe across the square from the apartment we stayed in in Palermo. Still, I wanted to make sure I wasn’t imagining the deliciousness and therefore I had to have three of them just to be certain that I wasn’t mistaken. 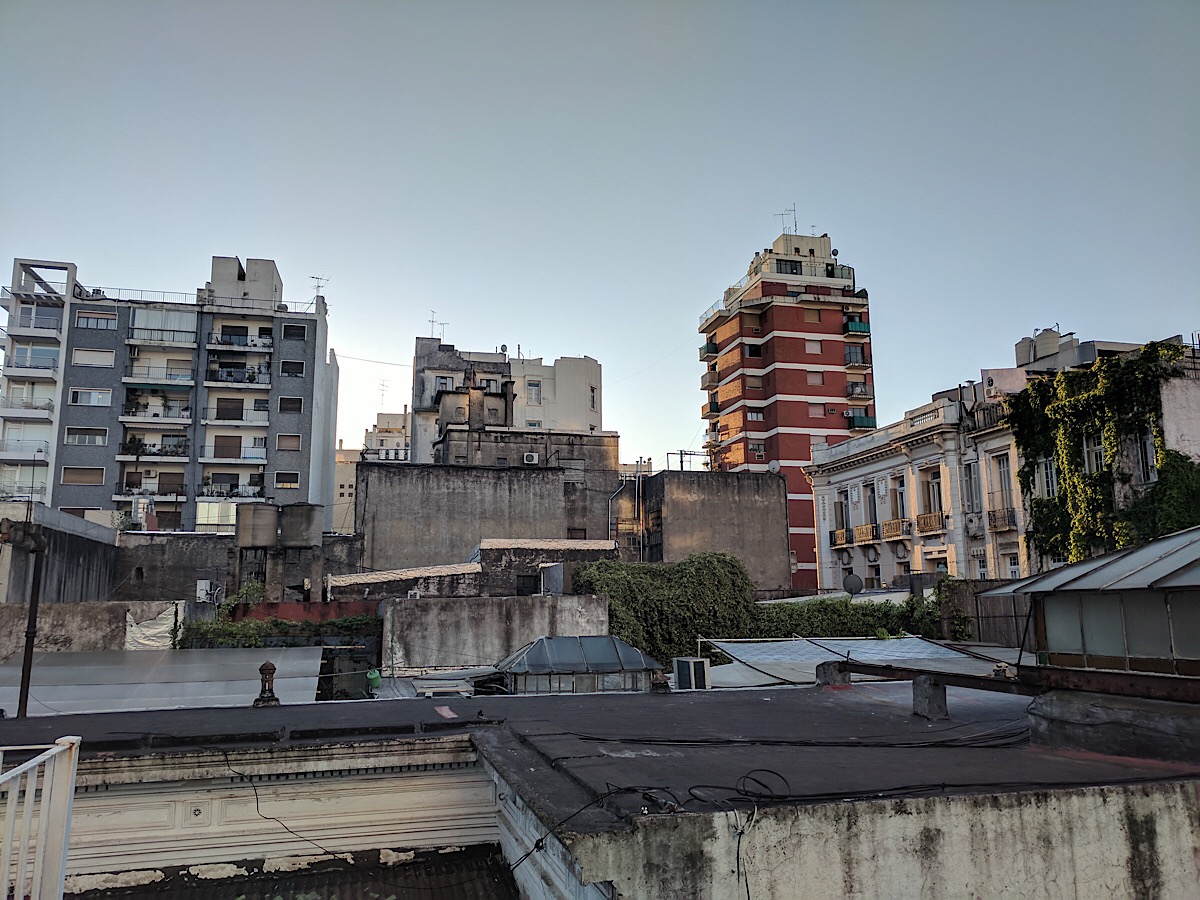 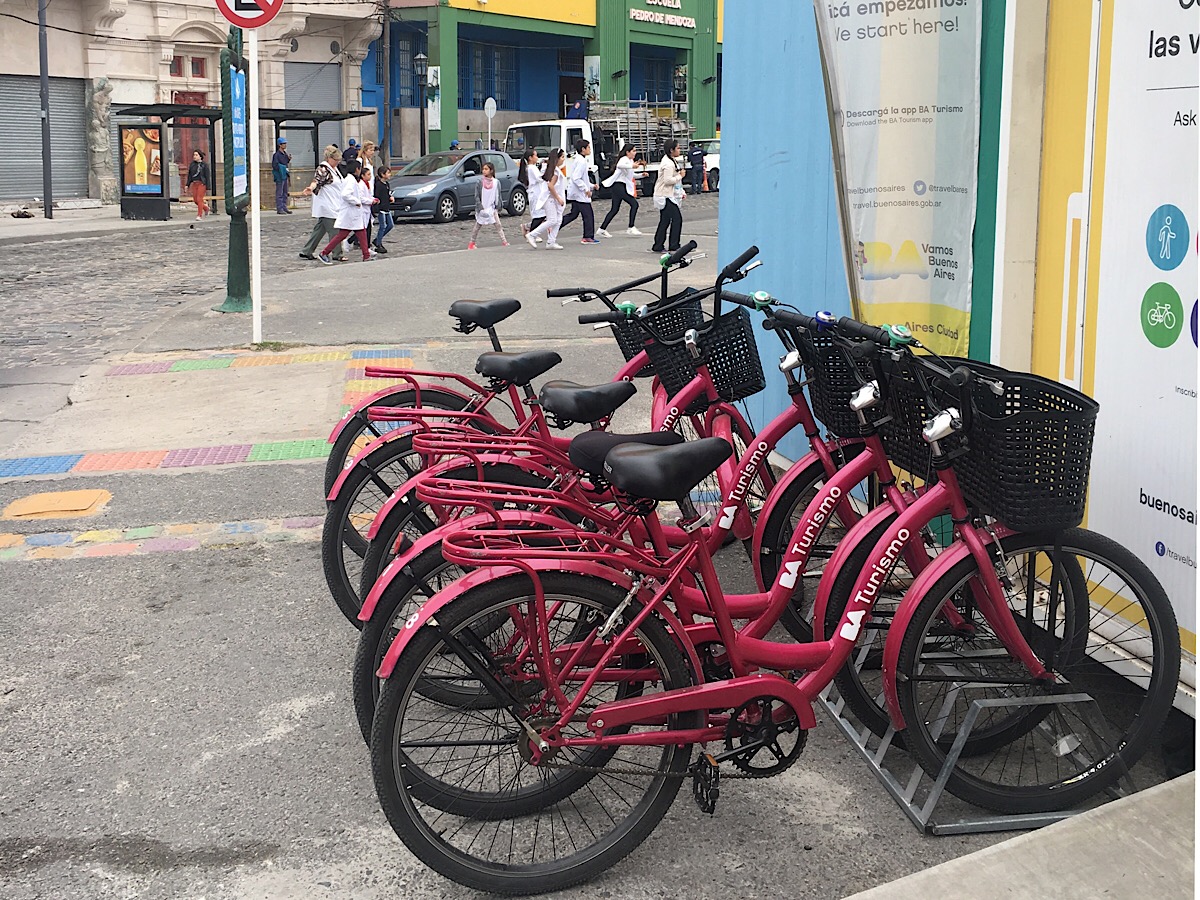 Day 2: Sadly, $300 a night for a room was not in our budget. So, we packed up and moved on to San Telmo. After settling in, we did a little exploring of the neighborhood and walked along the waterfront area to the Puente de la Mujer, a bridge that could also be a modern art installation. We got groceries, made dinner, and took it easy.

Day 3: We headed into La Boca for a free city-run bike tour of the neighborhood. The main stretch of the neighborhood that is almost entirely a tourist attraction at this point, Caminito, is full of brightly colored houses (mostly made up of corregated metal structures) but seems to have little to do with the rest of the neighborhood at this point. La Boca, beyond Caminito and the La Bombonera stadium, there was not a lot to see in La Boca. It is clearly a residential neighborhood but I could see how the warnings to tourists to keep to the Caminito with their expensive cameras would be good advice. It’s not an especially enjoyable place for a casual stroll. To be honest, Caminito felt to me like how La Boca would be re-created in Las Vegas- all for show and just a little to much over the top.

After the tour, we made our way back to a little bakery that smelled so good as we passed it on our bikes that we had to check it out. Lucky for us, a woman who knew what she was doing inadvertantly gave us a demonstration of the proper way to select your pastries, which included fetching a large metal bowl and tongs, collecting your sweets, and then proceeding to a counter to pay. We got 8 tasty pasteries, including a cake filled with dulche de leche for only about $3 USD! 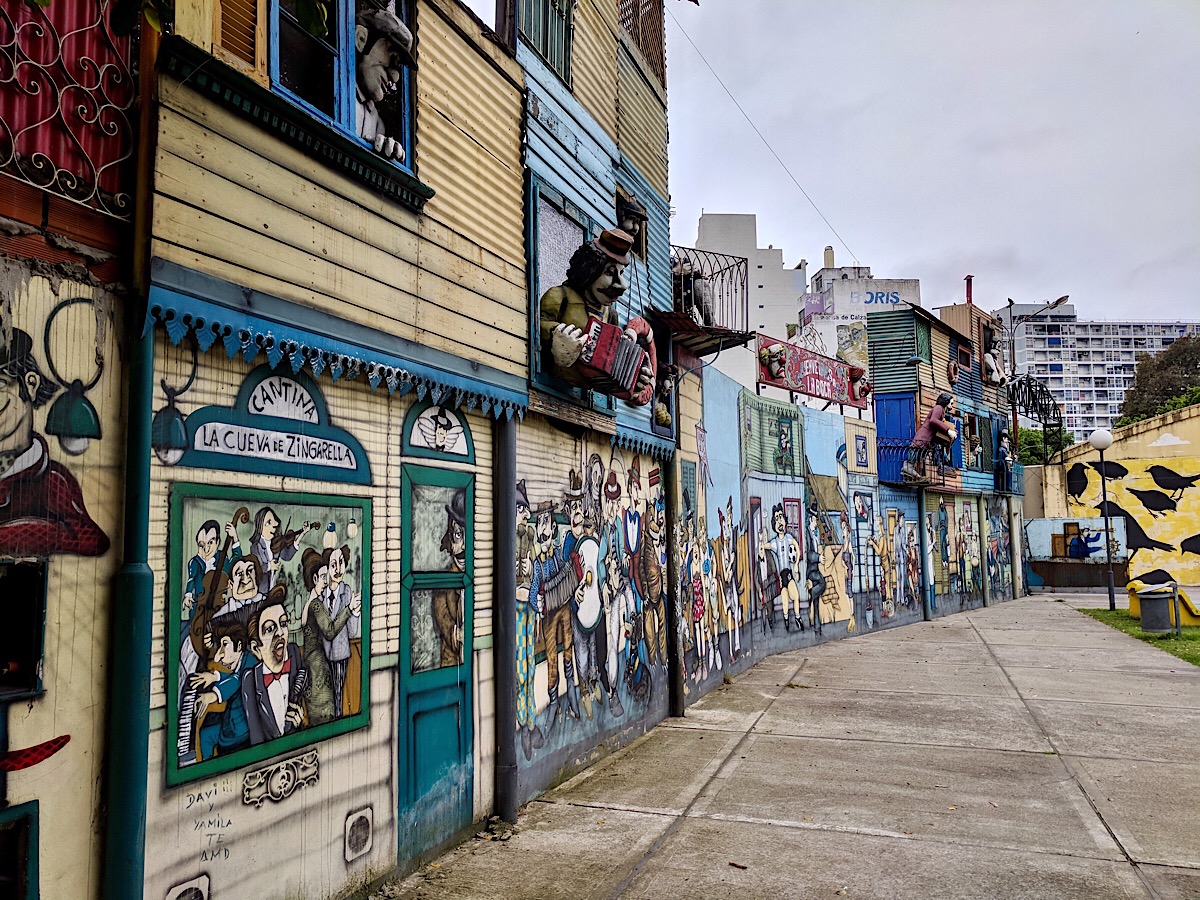 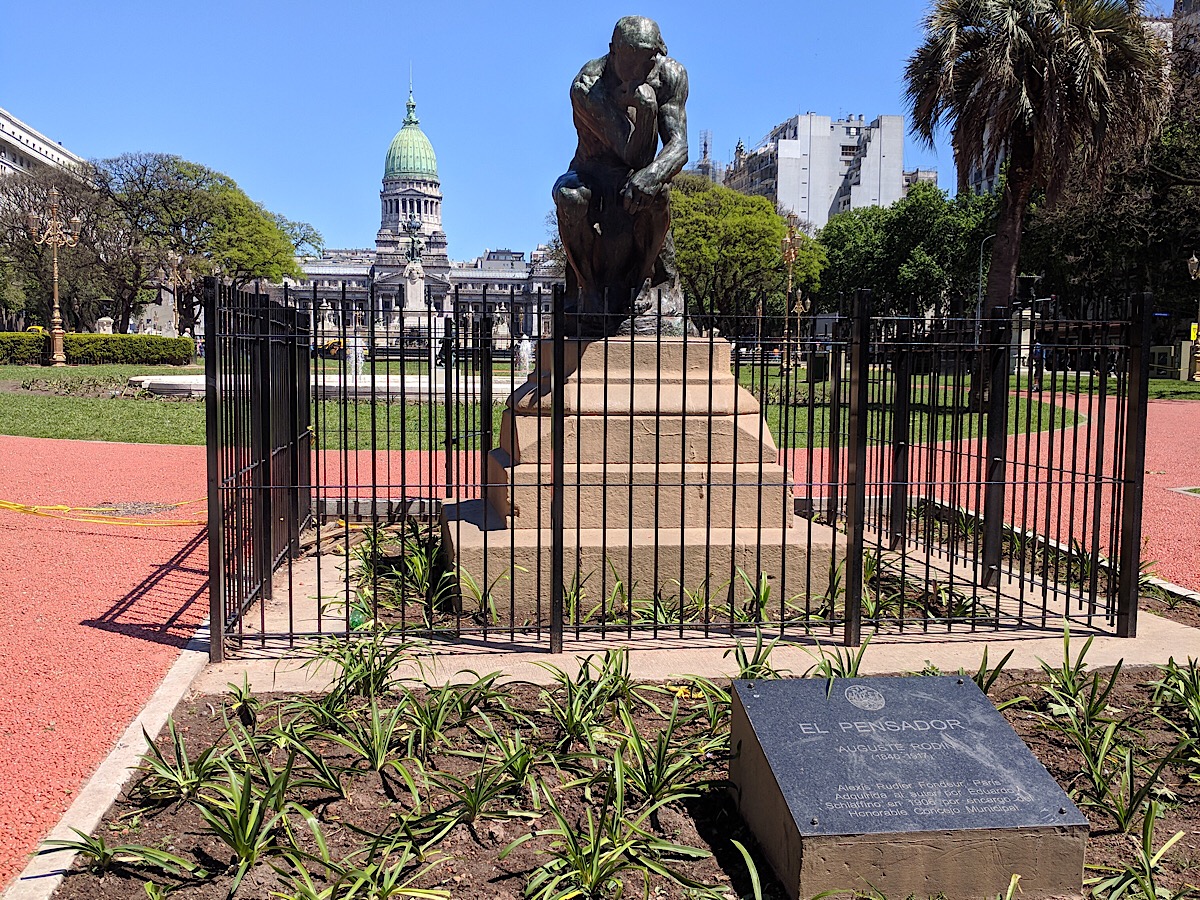 Day 4: After our success in Rio, we have decided guided walking tours are not the worst way to get a little context for the city you are visiting, despite our initial hesitations. After doing some research we learned that there are two main walking tours for downtown, the red shirt company and the green shirt company. The red shirt one seems to be more popular and reviews showed that it attracts pretty large crowds and so the guides use microphones to be heard. That seemed like too munch for us. Instead, we went with the green shirts and did our tour with a group of about 10 people.

The tour guide showed us some of the major sights in downtown Buenos Aires including the National Congress (modelled on our very own Capitol in D.C.), Plaza de Mayo, the obelisk, and Rodin’s El Pensador (The Thinker). The Thinker is actually conveniently located in a park near the National Congress to be enjoyed by the public. It was impressively well maintained given it’s outdoor location and the many pigeons that call the area home. 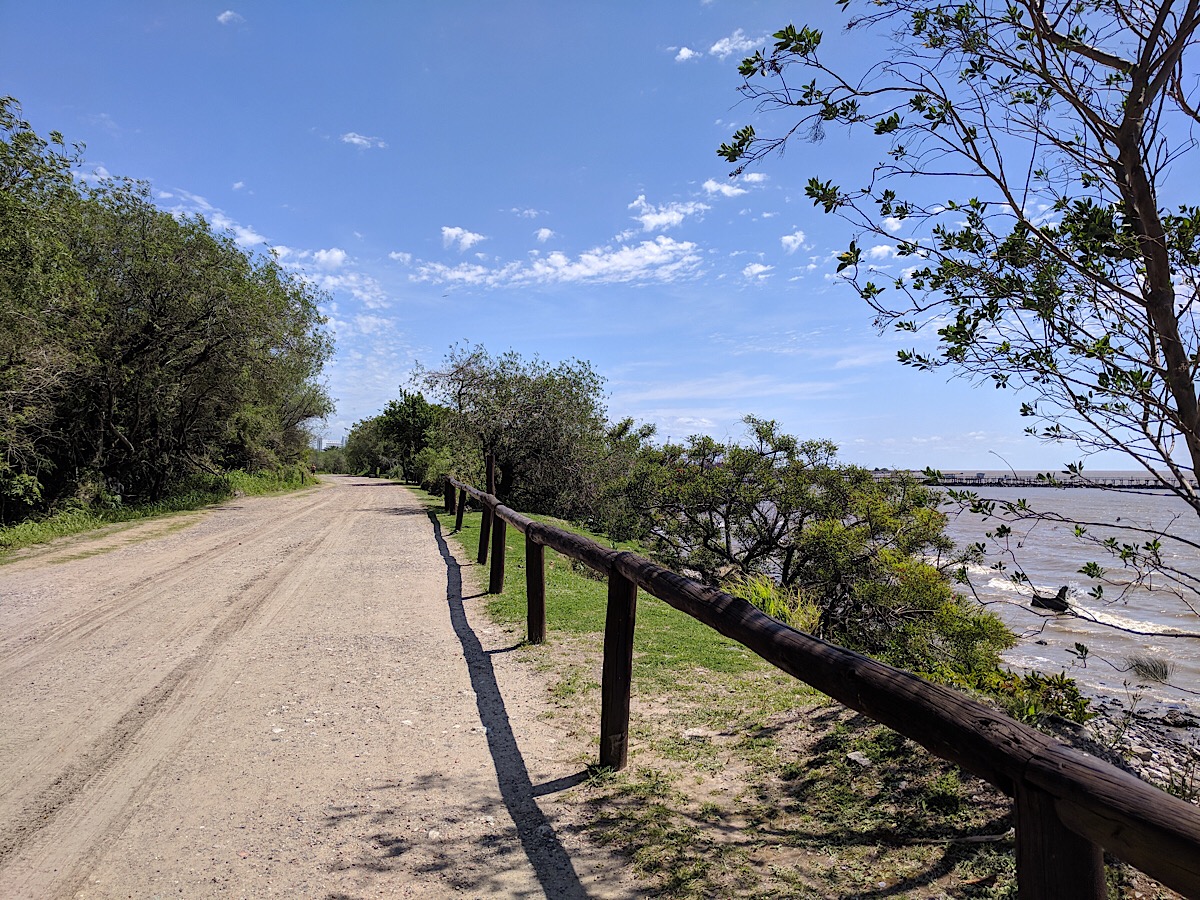 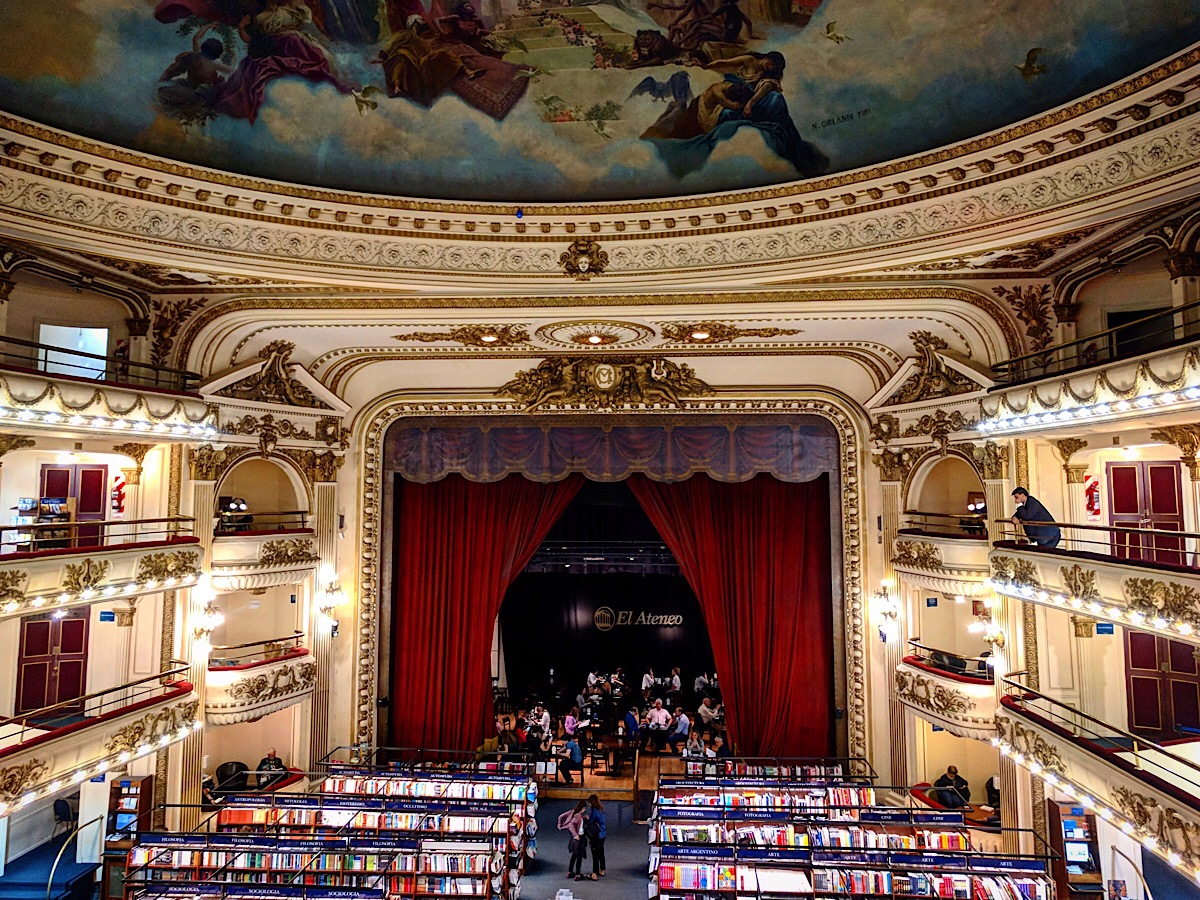 Day 5: As usual, we wanted to enjoy the green spaces available in Buenos Aires and the Reserva Ecologica seemed like a great option. The park wasn’t far from our apartment so, we went off to enjoy a walk. I have to admit, I was a little disappointed. There are large, very flat walking paths through the entire reserve. Many people were taking advantage of them for a morning run. There were plenty of trees but not many places to sit and relax. The trees also unfortunately blocked almost all of the view of the swampy wetlands in the park, so there is little wildlife to be seen and the concentration of groups of school children make it less than a peaceful experience. I could see really enjoying it if I lived in Buenos Aires and wanted a nice place to run a few miles but left me a little disappointed as an attraction.

With the hopes of raising my spirits, we headed to lunch at El Ateneo, a former theater turned bookstore. There is a cafe on the stage where you can enjoy a great view of the theater now filled with books and people perusing. They even had an event space set up for some sort of concert.

Day 6: Our Saturday ended up being very uneventful. We had organized our day around a tour we had set up at Casa Rosada in the afternoon. We had a leisurely morning and made our way to the Florida area again for lunch. Unfortunately, when we got to Casa Rosada, the police were in the process of locking it down as demonstrations were taking shape around Plaza de Mayo before the mid-term elections the following day. Despite our reservation, we were turned away at the gate. Disappointed, we walked around a bit and then spent a quiet night getting some planning for our time in Peru done. 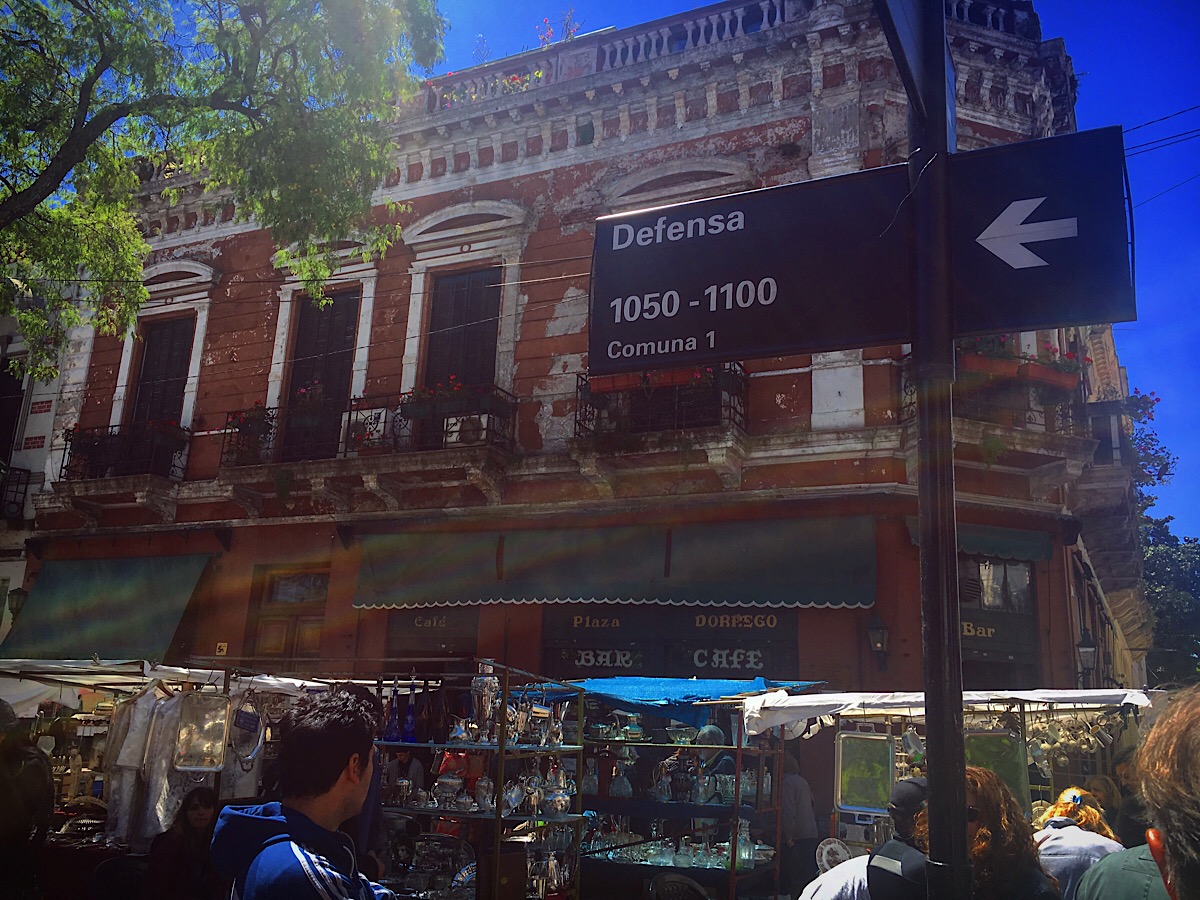 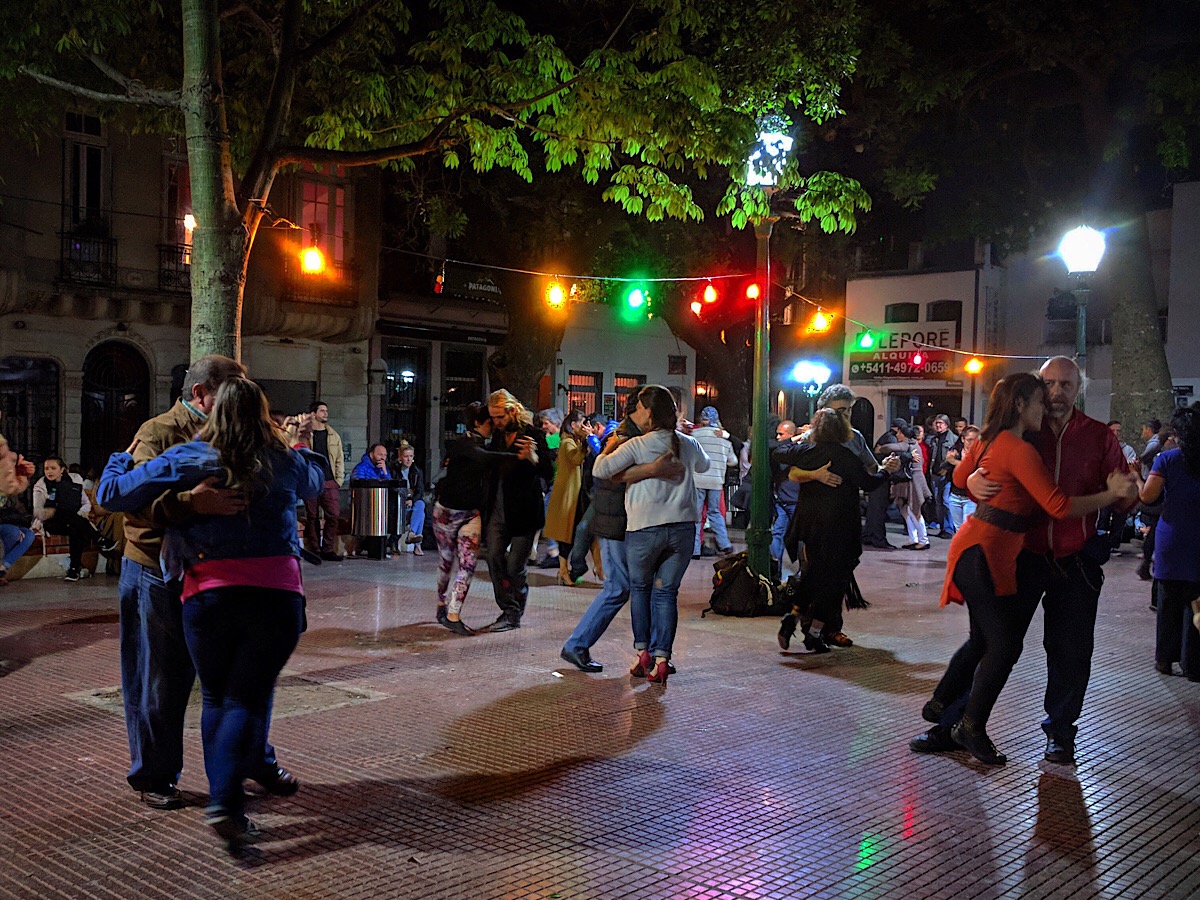 Day 7: Sundays are the day to be in San Telmo. The street at the Plaza Dorrego nearly all the way to the Plaza de Mayo is closed off and filled with vendors for a flea market. If you want to get your own mate (tea) mug, this is the place to do it. If you want to browse through a surprisingly diverse collection of antiquies, clothes, and assorted junk; you could spend hours here. Right at Plaza Dorrego, there was a pretty high concentration of tourists with big cameras clicking away. After that, there were still a lot of tourist or at least English speakers but far fewer cameras.

We walked the full length of the market and decided our favorite oddities were a toy that when you pulled a string made the exact sound of a clucking chicken and the many many daggers on offer.

If you visit the market, you should also stick around until evening to enjoy the milonga, a gathering for tango dancing, at Plaza Dorrego that starts around 19:00. We had dinner at home before venturing out to watch (unfortunetly we missed the instruction portion for amateurs) more experienced couples dance tango from the sidelines.

Our time in Buenos Aires was not yet over. To get a broader experience of what the city had to offer, we decided to split our two weeks into neighborhoods; first San Telmo and then Palermo. You can look forward to a compare/contrast of the two sometime soon!