The Great Barrier Reef: 32 hours that I will never forget 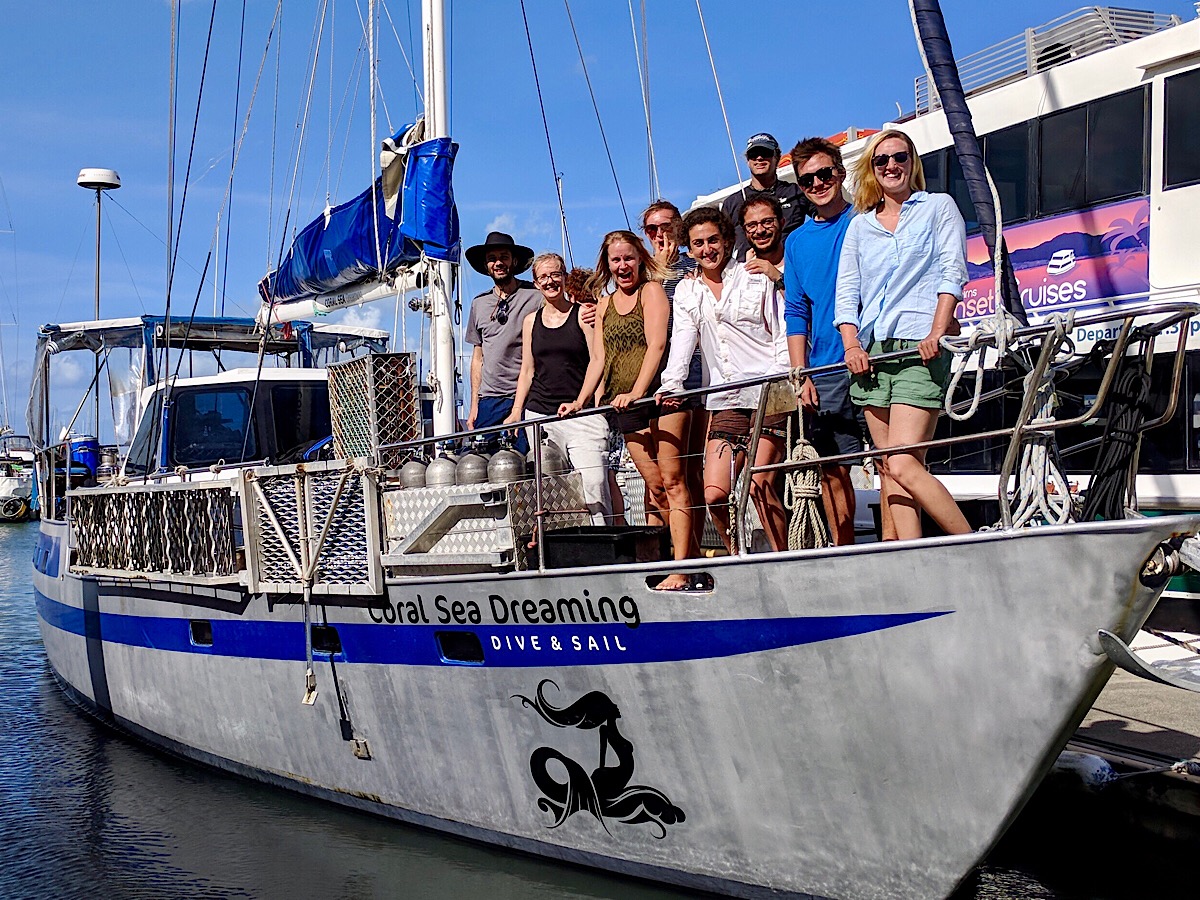 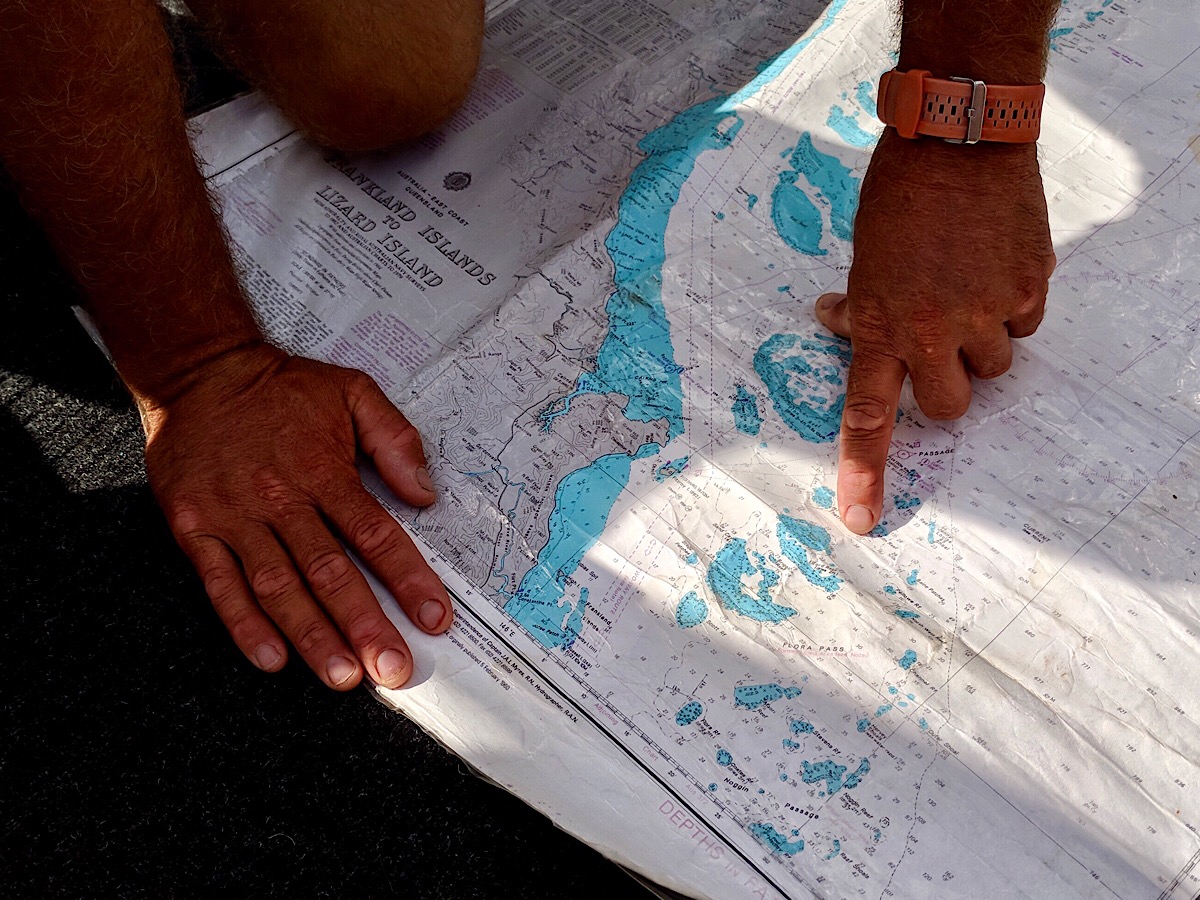 Right off the bat, I have to say that diving The Great Barrier Reef is one of the coolest things I’ve ever done. Scuba diving at the Three Sisters on Milln Reef was the completely awe-inspiring. David Attenborough documentaries, which I have seen many of, are amazing but just don’t do it justice.

Despite how beautiful it was, we decided not to rent an underwater camera. We decided it would be better to focus on seeing everything, concentrating on our buoyancy and what we needed to do for scuba diving, and not trying to capture it all. So, we may get a couple of photos from a other people from our boat that had cameras but it’s possible the memories will live exclusively in our heads. You’ll just have to take my word for it when I say it was incredible.

There are a lot of options for diving the reef at different price points. One of the less expensive options is to take a day trip to snorkel or dive on a large ship that can take 200-300 people at a time. These can be found for under $100 per person, but often visit the closest parts of the reef rather than the most interesting. We wanted to be able enjoy our time on the reef more though. Being surrounded by so many other people while trying to enjoy the reef did not sound enjoyable. We knew we might never get to see the reef in the same way again given the damage done by climate change and pollution. So, we decided to make one of our largest splurges to really enjoy it.

We got two spots on a sailboat, Coral Sea Dreaming, for an overnight trip to the reef. The boat maxes out at 12 passengers and for our trip there were only 8 guests total and 4 staff (1 in training). We got a private cabin that had a full size bed but not much else, meals were included and were simple but filling.

Most importantly, this boat was able to do “intro dives” with people that are not certified to scuba dive. Since getting certified is expensive and time-consuming, we didn’t want to try until we found out if we actually liked scuba diving. They make sure to stop at spots good for both divers and snorkelers, so there really is no downside.

After doing a basic introduction to how to dive - using the regulator to breathe, clearing a regulator, not holding your breath, how to sink and surface, etc - we ended up doing 4 dives. Three were during the day and one was a night dive, according to our skipper their boat is one of two in Cairns that can take un-certified divers out at night. 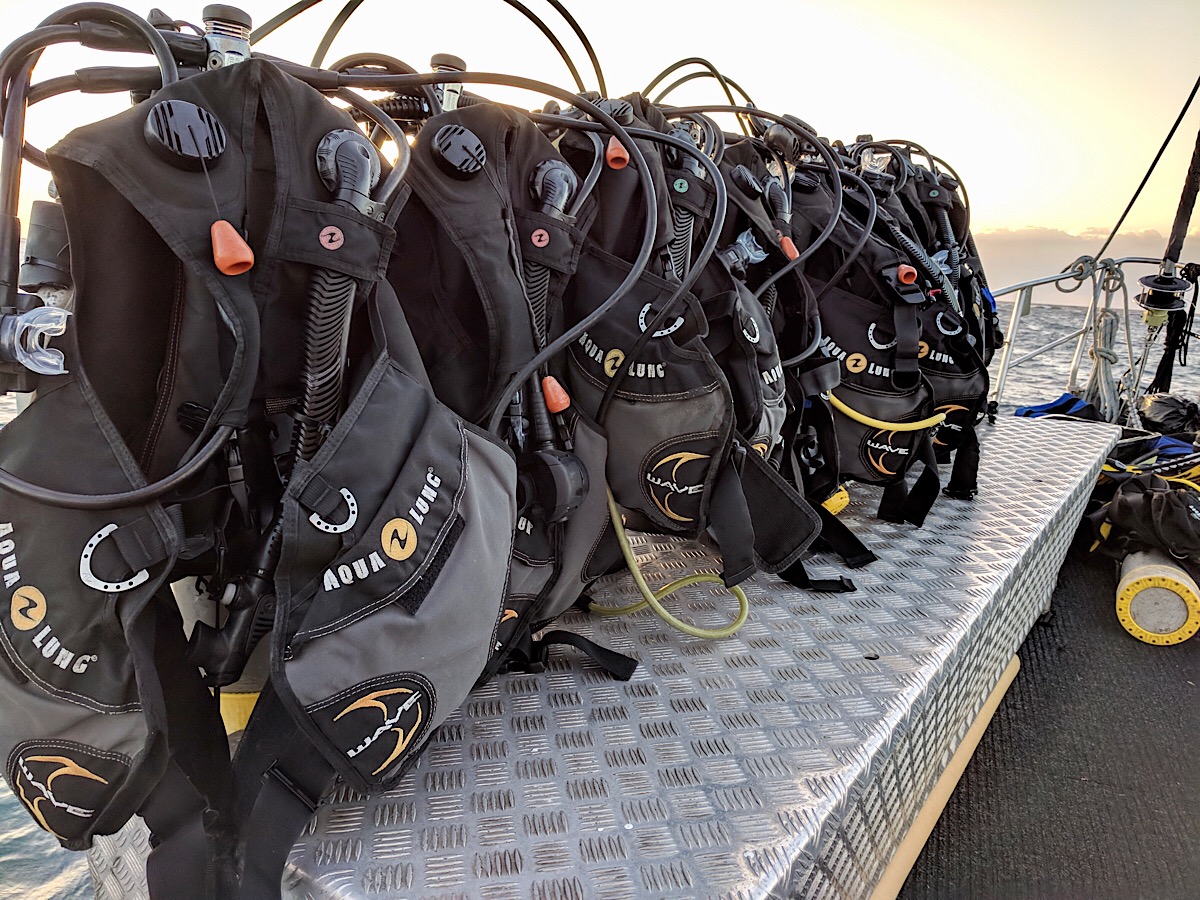 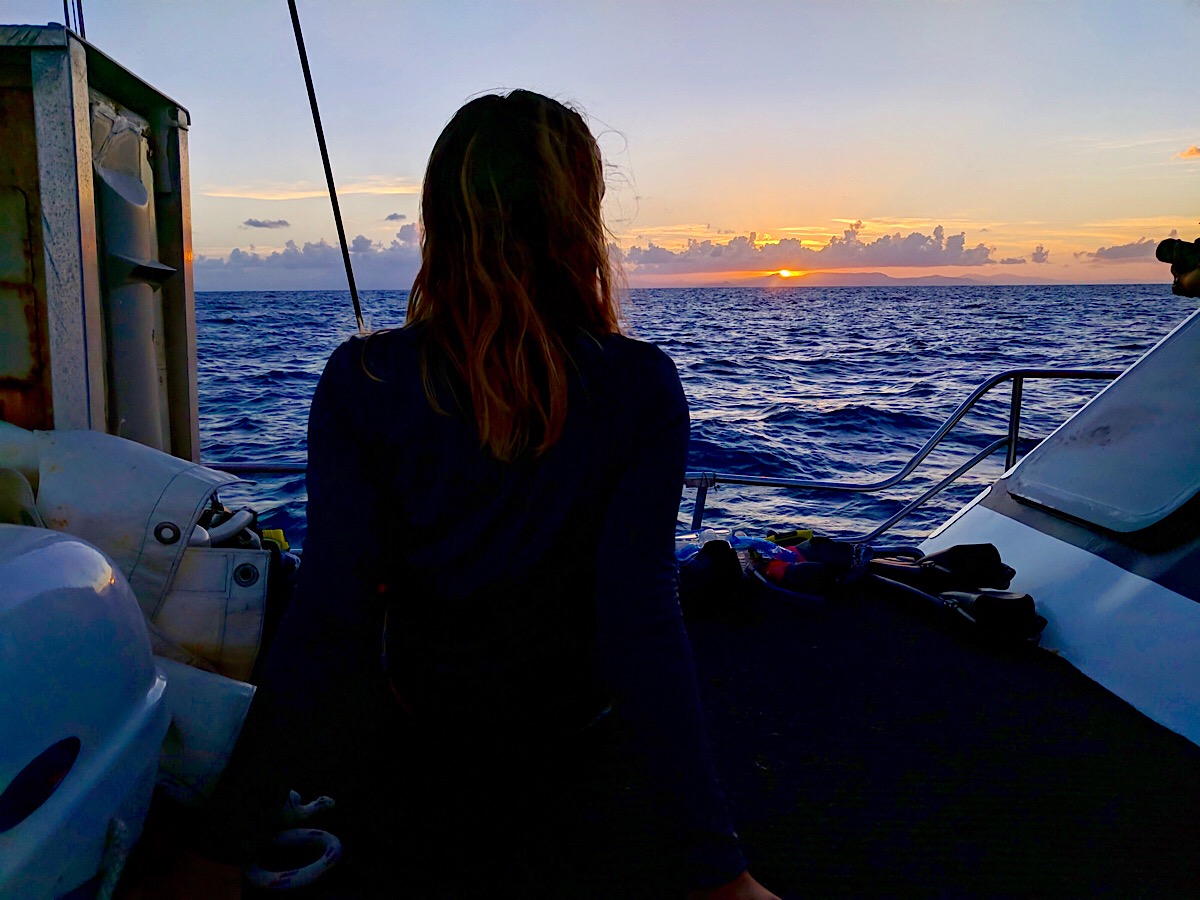 We spent our 24 hours on reef at Milln Reef, about 35 miles off the coast of Cairns. Our first dive was a little nerve-racking for me. Despite having the basics from our briefing, I didn’t yet know how to use my breath to control my buoyancy (floating or sinking) and I wasn’t really comfortable on my own. Luckily, this was the least eventful dive so I was able to warm up a bit before we got to the next, increasingly amazing dives.

Diving at night is insane. The stars were bright above us but there was a new moon, only a couple of lights on the boat, and no other ships in sight. The water was pitch black.

When you dive, you have a small but powerful flashlight. Using the flashlight, you can see a circle with a diameter of about 1-2 meters. There were four of us diving, Nate and I, plus two instructors; so with all our lights you could see a little more.

There were a few incredible things we saw during our night dive. My favorite was watching red snapper use the beams of our flashlights to hunt small fish. Red snapper can be up to a meter long and hunt in groups. When we would leave our lights on a smaller fish, the snapper would move in to try to catch it and chase it around. At points the snapper were absolutely swarming us as we moved around the reef.

We also got to see sleeping fish that hide in the coral for protection from the large predator fish at night. Most special was the chance to see a parrot fish inside its mucus cocoon that they build for themselves each night–our dive pro had only ever gotten to see a fully formed mucus bubble once before.

Finally, we were lucky enough to see two sharks swimming around with us. One was a reef shark and the other was a white tip shark. Unlike the snapper we didn’t see them catch anything, but just watching their ease as they move through the water hunting was unforgettable.

The one somewhat creepy part of the dive was when you shine your light into a crevice or out into the water and see two shiny dots staring back at you. Some are small dots that belonged to shrimp and crabs but others are larger fish or sharks. What you don’t know is when you move your light, where those shiny eyes go and how many are behind you. In general, we were the biggest thing in the area so we didn’t have to worry too much but it definitely leaves you feeling like you’re being watched. 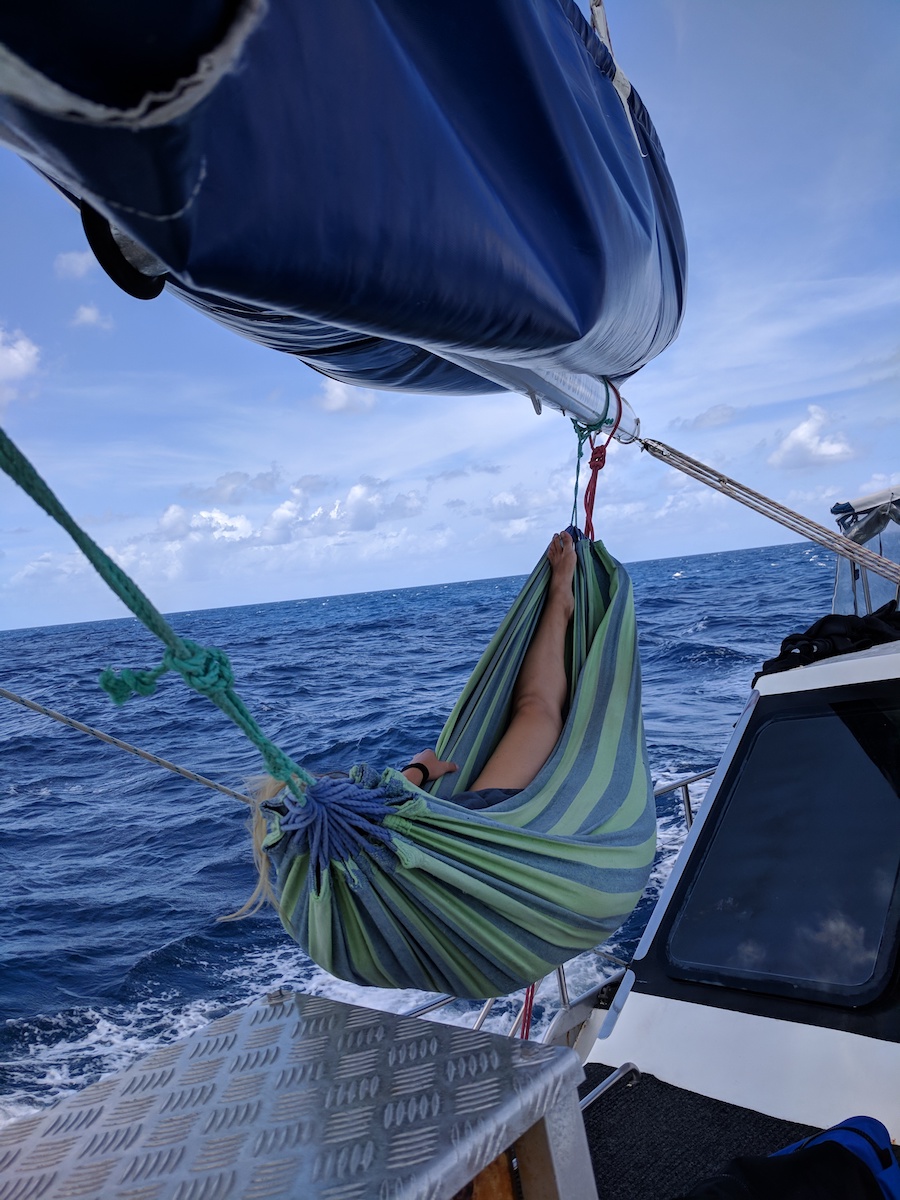 We had spent the night sheltered at our second dive sight and in the morning made our way to the Three Sisters. The Three Sisters are three pinnacles of coral a little apart from a larger chunk of reef that is more exposed to the nutrients of the currents, making them a thriving habitat. We did our last dive the morning of our second day and it lasted an hour, our longest dive and the maximum time we could dive.

The dive and snorkeling at the Three Sisters blew my mind. I’ve seen impressive things and done a good amount of travel but have never done anything like it. We were even at Machu Picchu recently. It was incredible but was nowhere near as impressive as this section of reef.

This dive also had our one scary moment during the trip–we had stayed underwater for close to our maximum time and Nate was running lowest on air. While we weren’t that deep and he probably could have made it back to the boat, the dive instructor had Nate use the spare regulator on his own tank just to be safe. Unfortunately that then got accidentally knocked out of Nate’s mouth, leaving him fumbling for either regulator while 20 feet underwater. Definitely got our heartbeats up but was solved in less than 10 seconds by the very-adept instructor.

Every minute of the dive was incredible. According to our dive instructors, the visibility was just average but for me it was bright and crystal clear, even if you couldn’t see the bottom standing on the boat. We made our way from the main reef to the first and second sister but the third was too far.

The coral was so colorful and so clearly alive. It’s all different shapes, though my favorite looked like huge solid ferns that stretch out from the main body of the coral. The fish life was also diverse with tiny fish that could blend almost seamlessly into coral up to large schools of silver fish that were 3 feet long. Some of the schools of fish also interacted together, smaller ones moving in between the larger ones.

One fish that was particularly active during our dives was the triggerfish. Triggerfish are large fish with a fin that they raise on their back when they want to intimidate something in their territory. They can get as large as 50 cm (about 20 in). Our dive pro warned us that they might be aggressive because December is part of mating season and the triggerfish will protect their nests. I didn’t take him that seriously but he was not joking. Twice while we were diving, we found ourselves in the territory of a triggerfish. When that happens, they charge at you. They are not small fish and they are quick. We had to turn and try to deter them with the threat of kicking them with our flippers. Luckily none of us got bitten because our dive pro said he had heard stories of bites that required stitches and others that took chunks our of wet suits. We also never actually had to kick one of the fish. It does get your adrenaline pumping a little though. 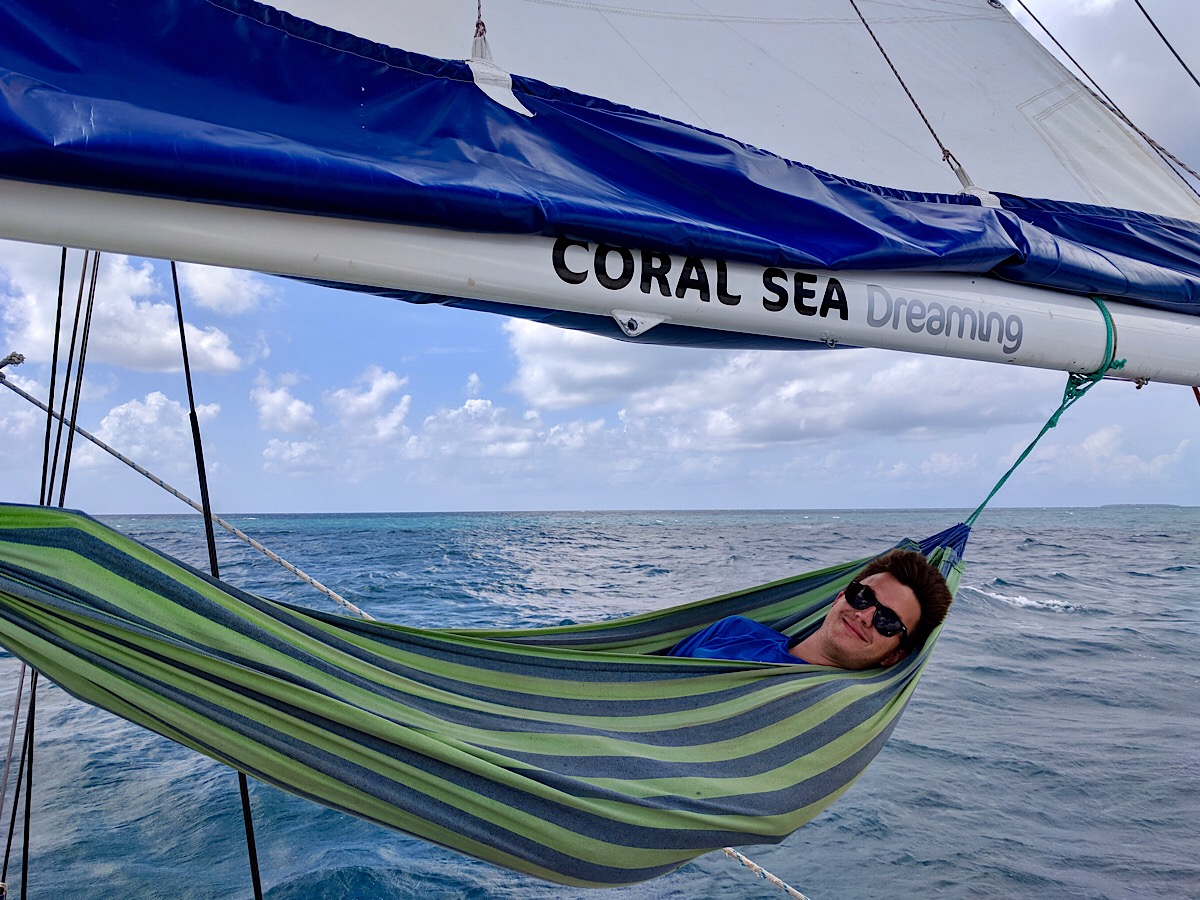 Nothing I can say will do justice to how wonderful this experience was. If you get the chance, you should go to the Great Barrier Reef. It’s expensive, probably prohibitively so for many people, but it is life changing and it could disappear. The reef has already experienced extinction multiple times. It is not out of the question that it will happen again.