Bagan to Yangon by Overnight Train

Just like for our Premier Classe train trip from Cape Town to Johannesburg, I was put on to the option to get around Myanmar by train by Seat61 - the best resource online about train travel all over the world - and before we left home I put together an itinerary for Myanmar that completely avoided planes and buses. Unfortunately once we got a bit closer and started mapping out what we actually wanted to do in each stop some of the timings didn’t work out well and the only trip we ended up booking was an overnight train from Bagan back to Yangon at the very end of our time in Myanmar.

We don’t regret having done it, but we’re happy that we didn’t book more overnight train trips in Myanmar.

We wanted to maximize time in Bagan and settled on a plan to take this overnight train back to Yangon on New Year’s Day, arriving just a handful of hours before our onward flight from Yangon to Hanoi on January 2. Unfortunately tickets for our train would go on sale the day before we arrived in Bagan and given the holiday might sell out that same day. Given how annoying it would be to end up missing our next flight, we buckled and paid a travel agent to secure tickets for us in the sole sleeper car in the train. They were easy to work with and had the quaint handwritten tickets dropped off to our hotel while we were in Bagan. 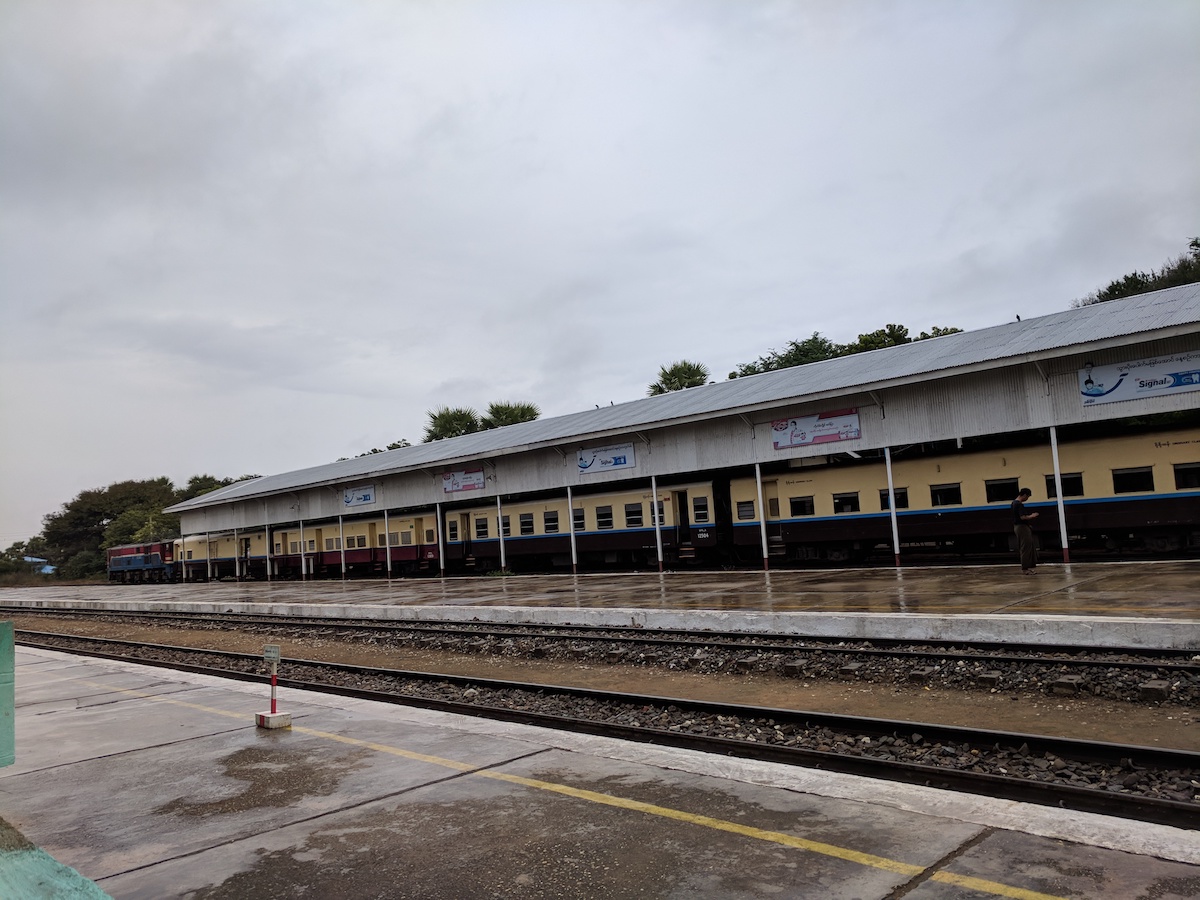 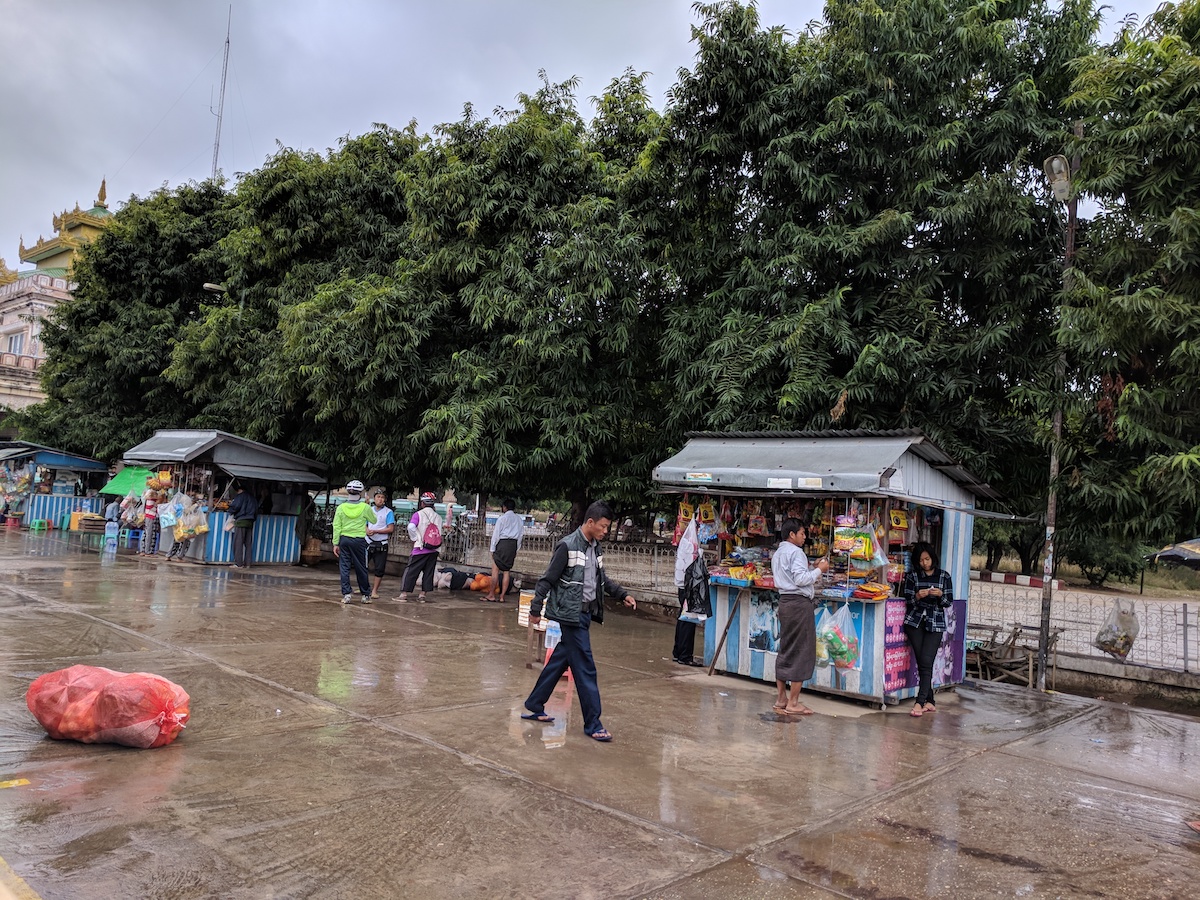 We arrived at Bagan’s only train station–further from the city than the airport!–a little after 3:00pm and joined a very-full platform of fellow travelers waiting to board the 4:00pm train. After reading so much about possible delays from other travelers, we were a bit stunned to see our train pull up at 3:30pm and everyone board immediately to await departure.

We got to our cabin and had our first nasty surprise of the journey: our train had a “special sleeper” car that consists of fully detached individual cabins, meaning it is impossible to move up the train to other cars during the journey. We had our own in-suite toilet, which was western-style but with an open bottom directly to the tracks below. Because we would be unable to visit the dining car, just minutes after we boarded our car while we were still settling in, the “train manager” (a teenager in jeans and flip flips who I’m still not sure was actually an employee) came to take our orders for dinner and breakfast. Without menus and with the “train manager’s” few words in English, we did our best to try to figure out what our options were, how much each item would cost, and not get swindled… but more on that later. 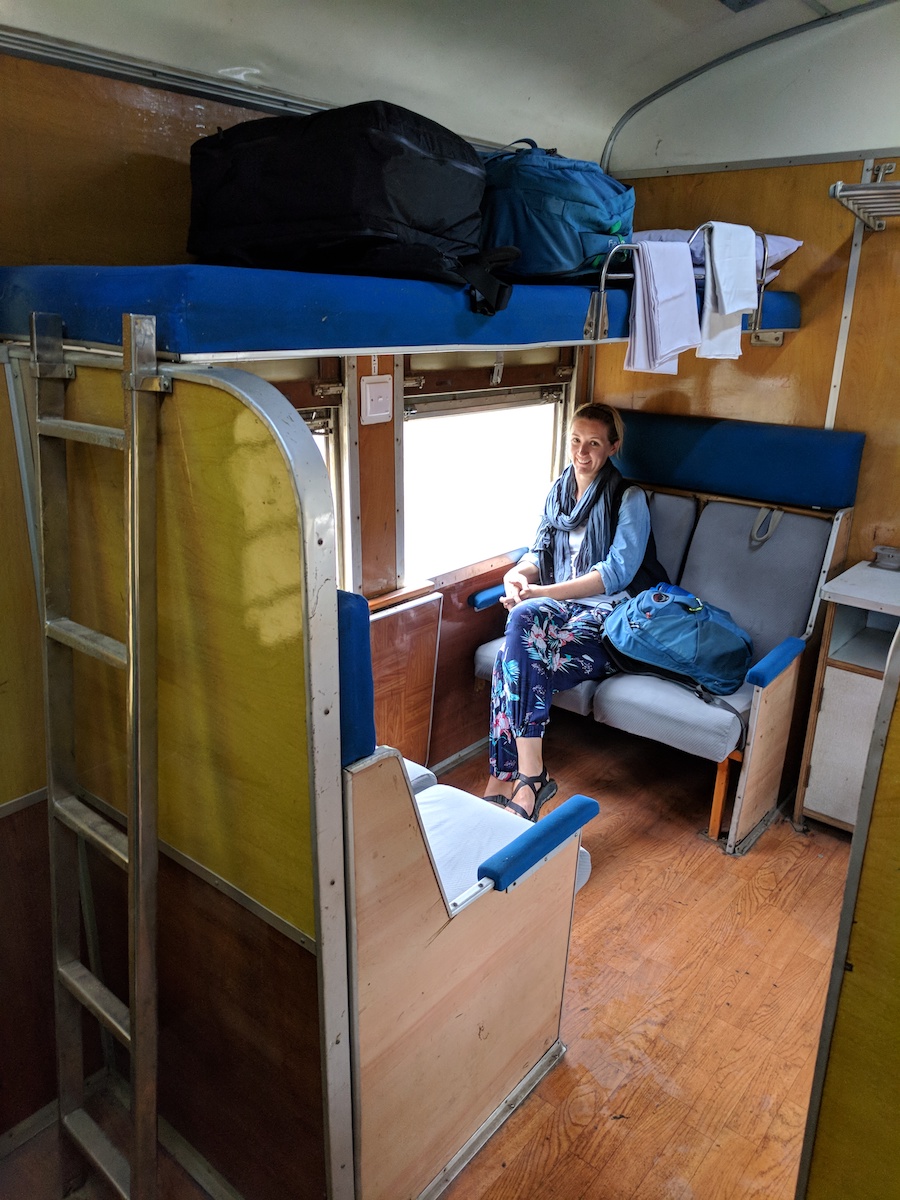 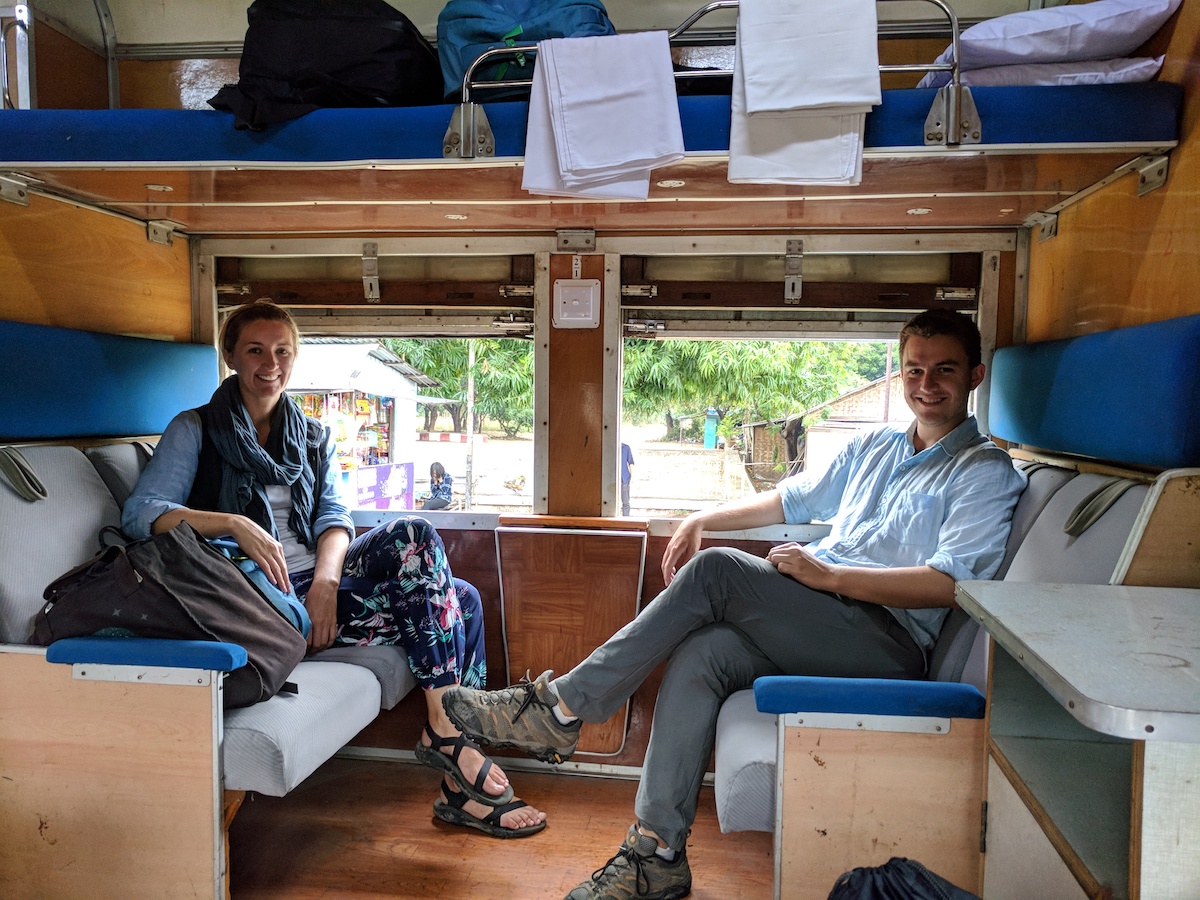 We were joined in our 4-bed cabin by a young couple from Yangon heading home after the holidays. They were great cabinmates, giving us tips throughout on surviving the journey and sharing their choice food picked up ad-hoc along the way from vendors at intermediate stops. Their belief was that the “special sleeper” isn’t special at all and is actually now standard for this route–supposedly due to security concerns about other passengers trying to enter sleeper cars during the night. They also translated advice from the conductor for us, like to keep all of our bags away from the open windows lest children running along the train reach in and make off with any of our belongings.

After settling in, the train pulled out right on time at 4:00pm and we enjoyed the passing scenery through our wide-open windows until it got too cold and we had to close them. Unfortunately the window-cleaning staff we enjoyed on our South Africa trip are not a feature in Myanmar and a closed window was about as see-through as a wall would have been.

Both dinner and breakfast were delivered to us while the train was stopped at intermediate stations (transferring freight, not passengers, we think). Somewhat comically, meals were not handed out on trays or even by railroad staff, but by vendors beside the tracks who had packed the meals in styrofoam and plastic bags before handing them into the car through the window. The “train manager” apparently has contacts along the route and phones in orders to be prepared before the train reaches that station. None of our food was good, but none of it made us sick either, so we can’t complain too much. 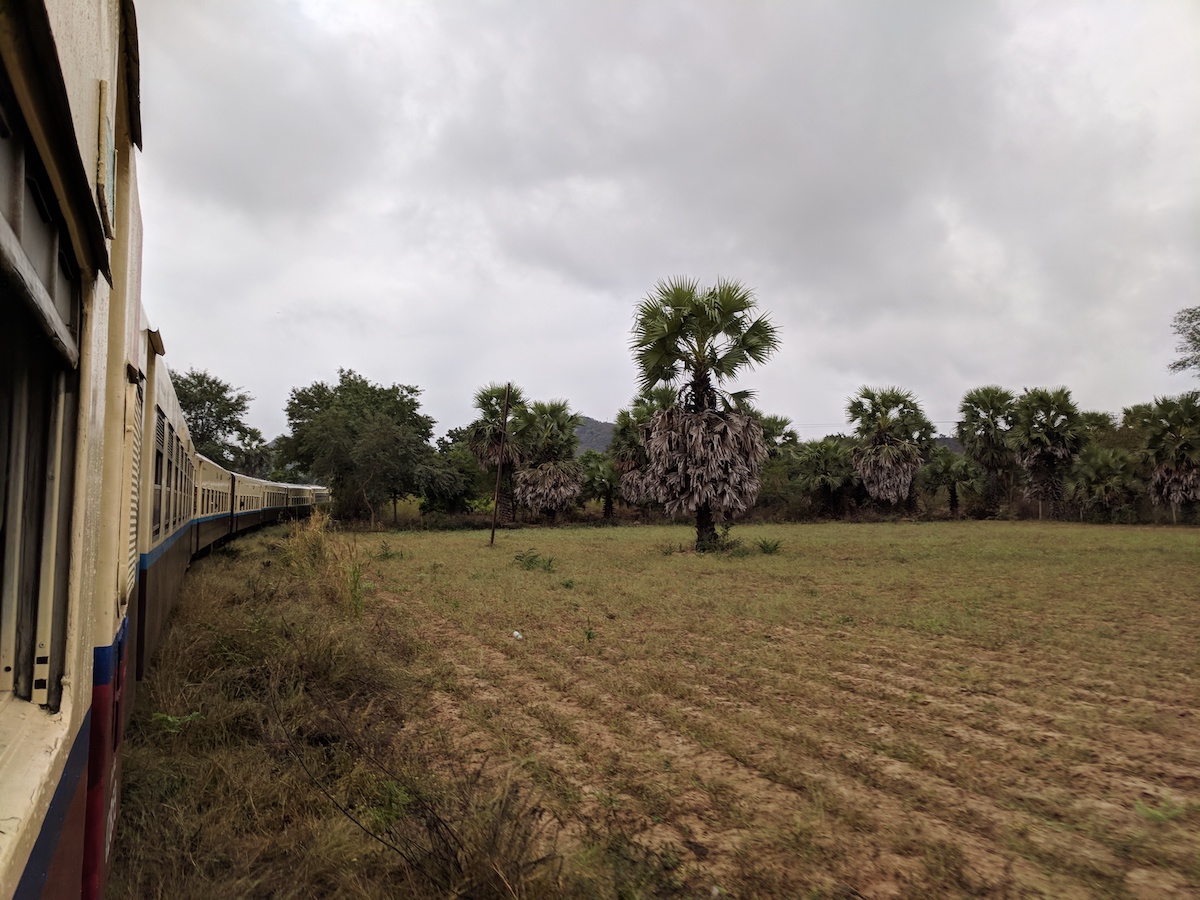 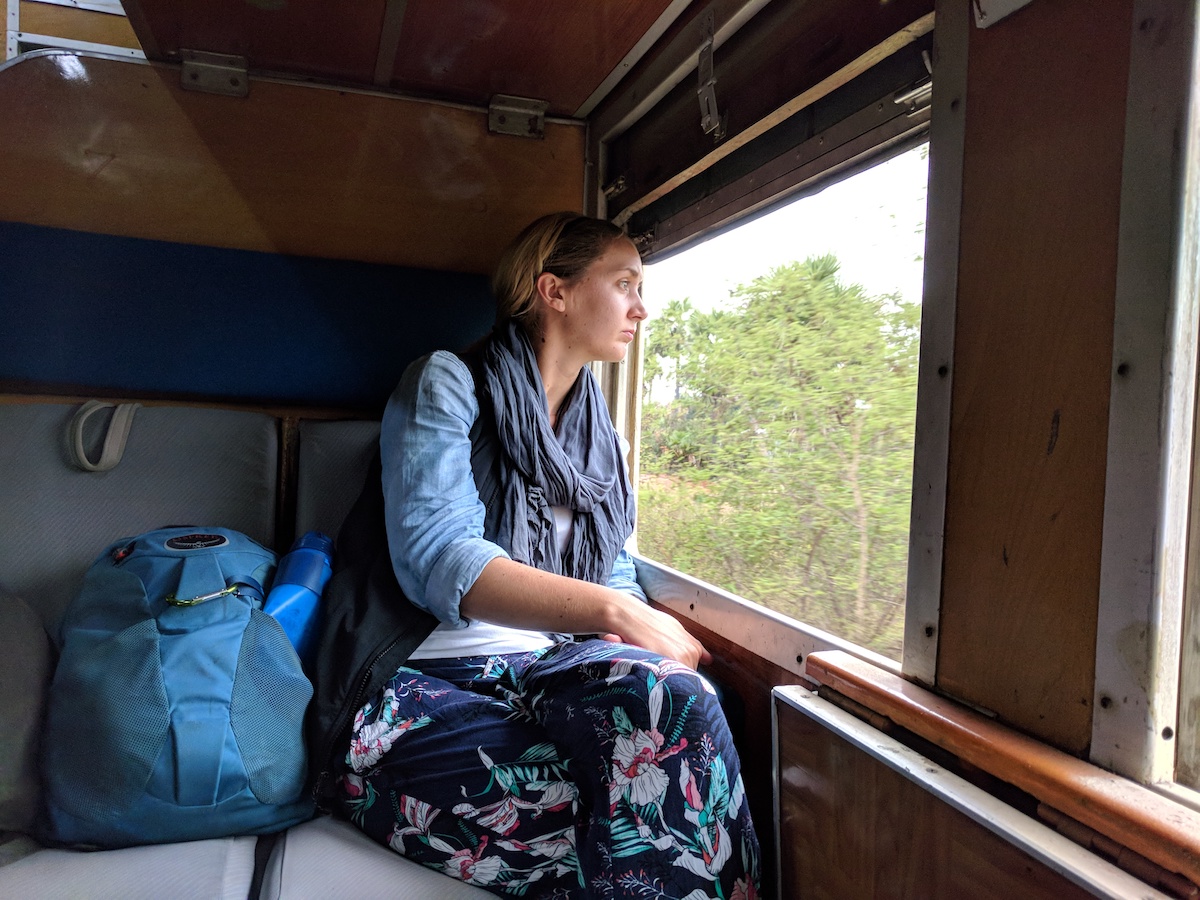 The scenery was wonderful, gradually changing from desert/chaparral to more jungle-like as we approached Yangon.

When we boarded we found two sheets and two pillows on our side of the cabin, and unfortunately there was no turndown service common on sleepers in other countries. Luckily we had the example of the other young couple to follow and clumsily figured out how to convert the lower seats into a flat bed. The pillowcases and sheets were clean, but to be truly comfortable we would have needed double of each.

The biggest barrier to quality sleep was the jerking, stopping, and starting of the train. We had been warned ahead of time about how bumpy the tracks would be, and they were, but most difficult to sleep through was the sudden braking and acceleration randomly throughout the night. It was definitely still worth it to pay a bit extra for a bed instead of a seat, and both of us did get some sleep onboard. 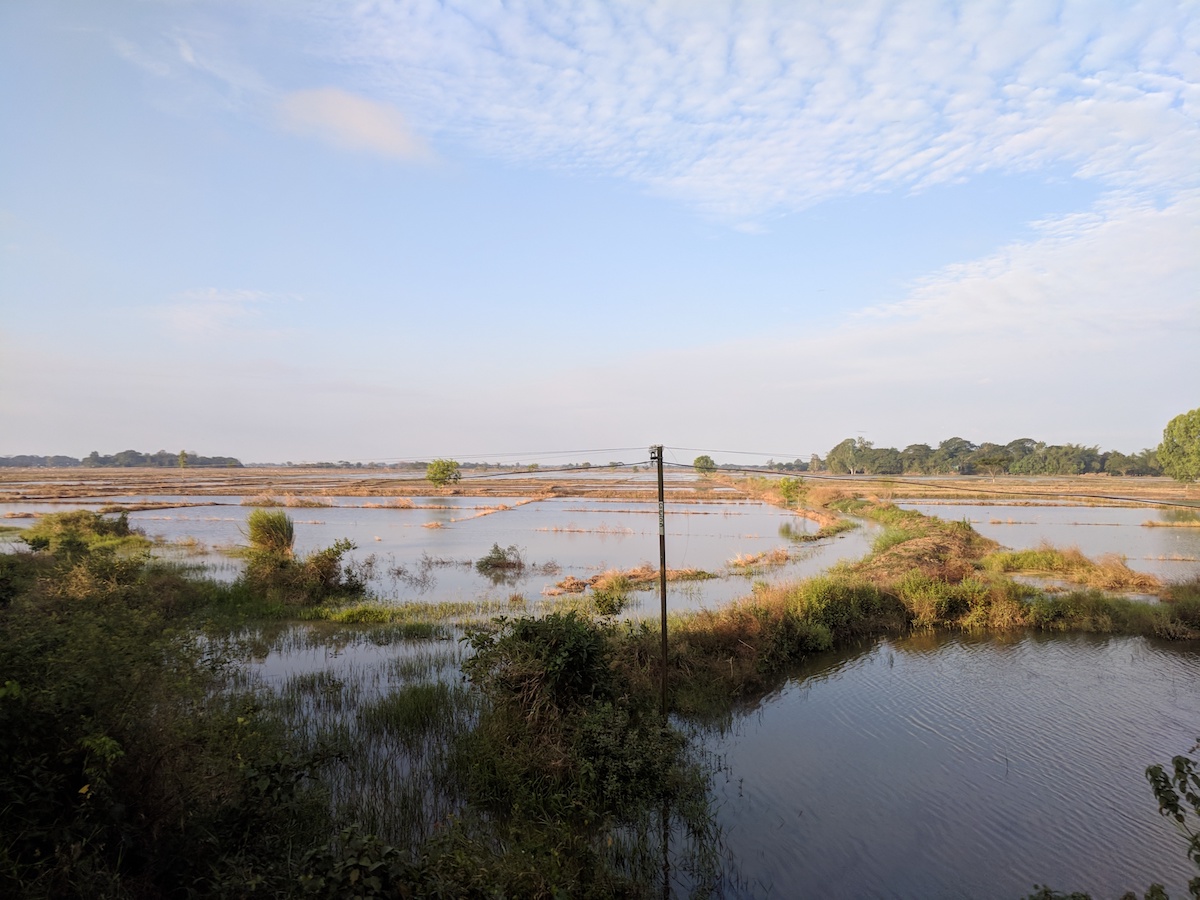 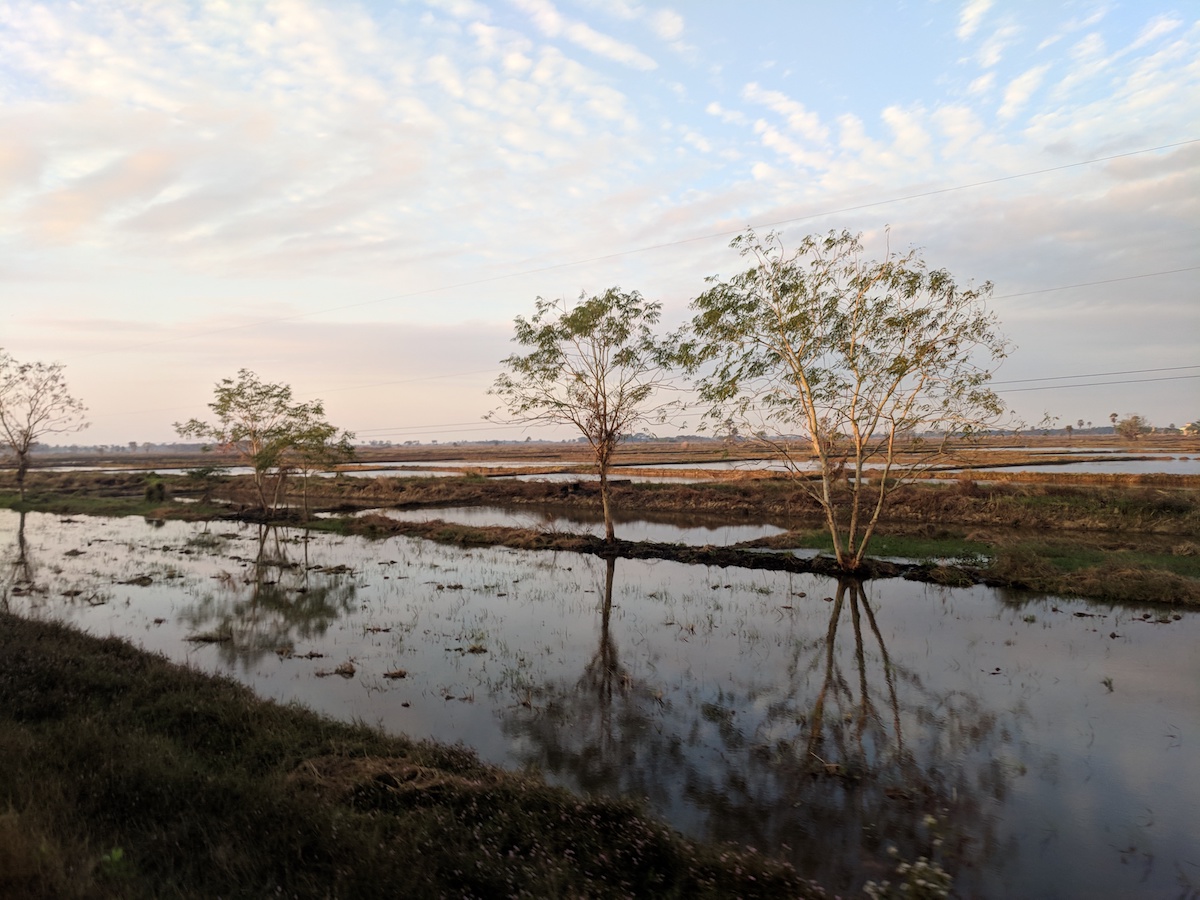 One of the experiences we enjoyed most about our time in Myanmar was how hospitable and honest almost everyone we interacted with was. Street vendors we couldn’t communicate with would charge a fair price and make correct change; touts were few and far between; and we didn’t feel like we constantly had to be on guard. Unfortunately that streak came to an end on our train trip when despite our best efforts at clarifying prices the bill delivered by our “train manager” for food consumed onboard was a whopping 34,000 kyat (25 USD) when our average cost per meal elsewhere was 3,000 kyat (~2 USD). The Myanmar nationals, who had slightly different dishes but about the same amount of food, were charged less than 10,000 kyat total. When he came to collect payment we disputed a couple of the more inflated prices and ended up paying 30,000 kyat (22 USD) before disembarking in Yangon.

At these prices getting scammed like this isn’t a huge deal, but was a disappointing way to end our travels in Myanmar. If we had another trip to take we would decline all offers from the “train manager” and just hang out the window dealing directly with street vendors at stops along the way (or pack a picnic if we had a good way to do so).

We’re happy that we did it, but glad we don’t have a return trip coming up anytime soon. There is something magical about long-distance rail travel and the chance to interact with locals and really relax. And there’s probably no better way to see the countryside, especially if you don’t have anything time sensitive on the other side and are able to set your expectations low about the service onboard. 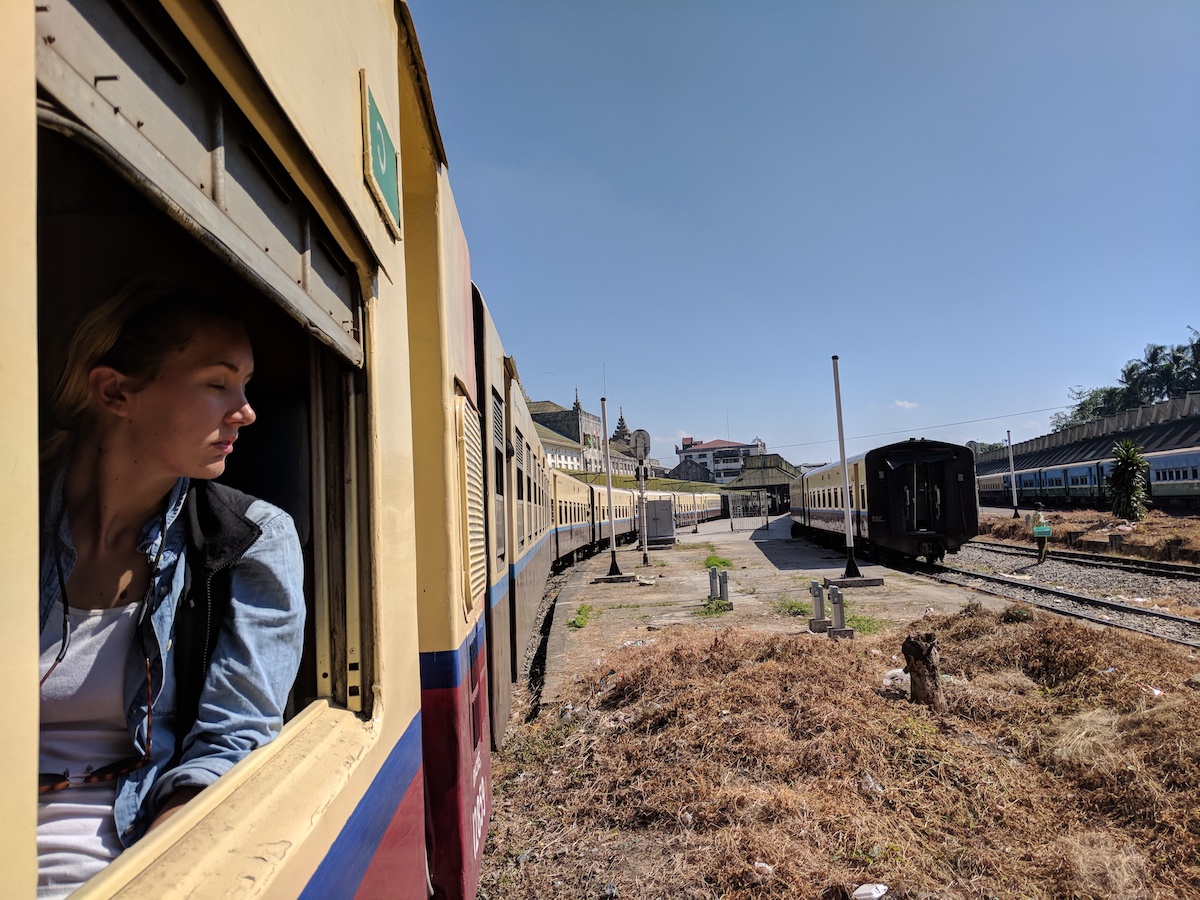