Sunset from our terrace.

After a mediocre stay in Delhi, we took another train, well two actually, to Shimla. One of the trains was a narrow-guage “toy train” that wound its way slowly up through the mountains showcasing beautiful views the whole way.

Shimla is in northern state of Himachal Pradesh and is the furthest north we ventured in India. Being in the Himalayan foothills meant having much more temperate weather, including some cooler nights where we had to pull out our sweaters and scarves. When the British occupied India, they would use Shimla as a summer retreat from the intense heat of the rest of the country. We could still feel the retreat mentality here as we strolled along the tree-lined ridge line without dodging cars, cows, or touts and just looking out at the vistas around every turn made us feel far more relaxed than anywhere else we visited in India.

We stayed at Vatsalyan, our first homestay of the trip. It was the home of a lovely multi-generational family that has four rooms for visitors but the only other guests while we were there were a small family. We had a large room with access to a terrace with great views of the mountains for watching sunset each day or relaxing by reading a book in the sunshine. The food was home-cooked by the wife and her mother-in-law and was some of the best we had in India including kofta that blew Nate’s mind (he may or may not have had three servings) and warm gulab jamun served after we mentioned how much we enjoyed it elsewhere.

What We Did in Shimla

Day 1: We arrived as the sun was setting and stepped off the train into crisp and cool air, already feeling hopeful about enjoying this place more than the 90+ degree days we’ve gotten used to over the last two months. We arranged with our homestay to have a driver pick us up because we weren’t sure that a random taxi driver would be familiar with the location about 20 minutes from the main area of Shimla. 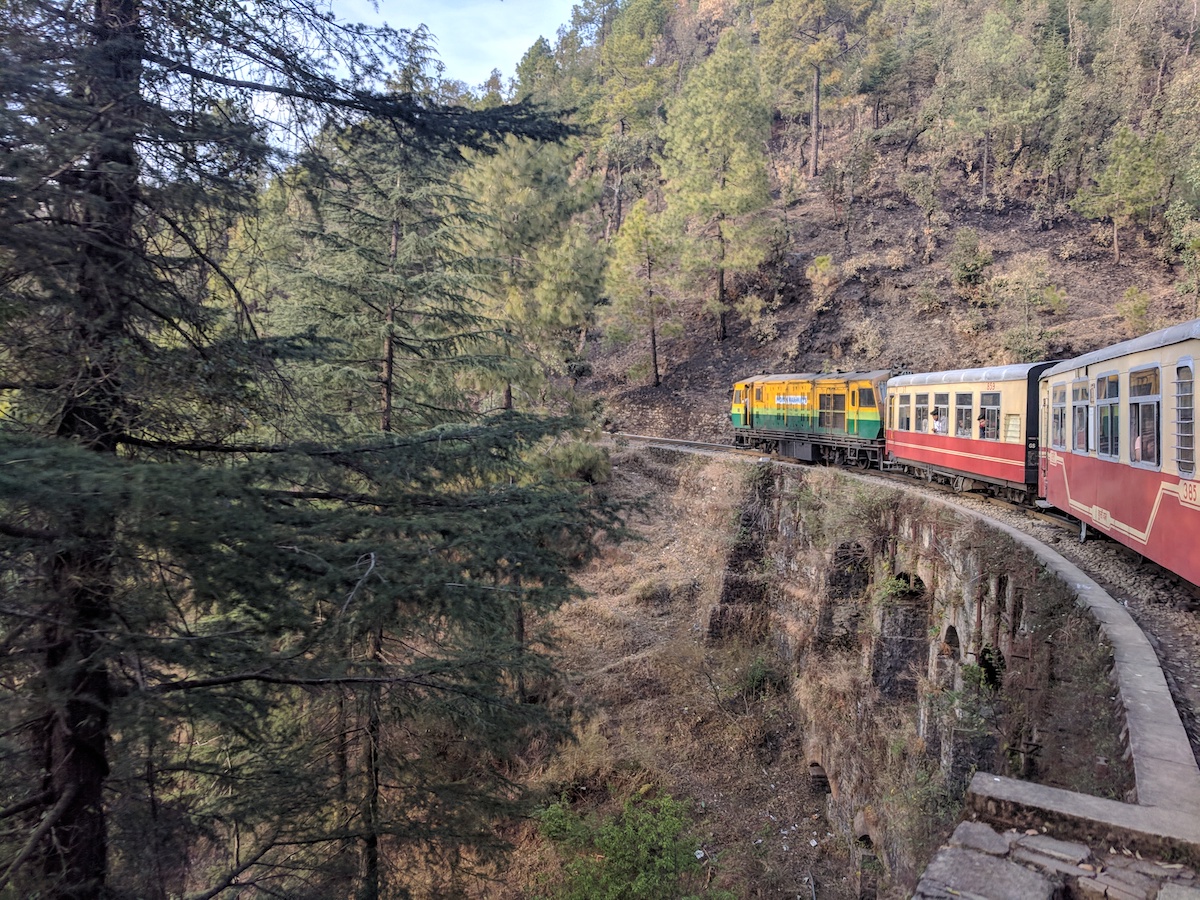 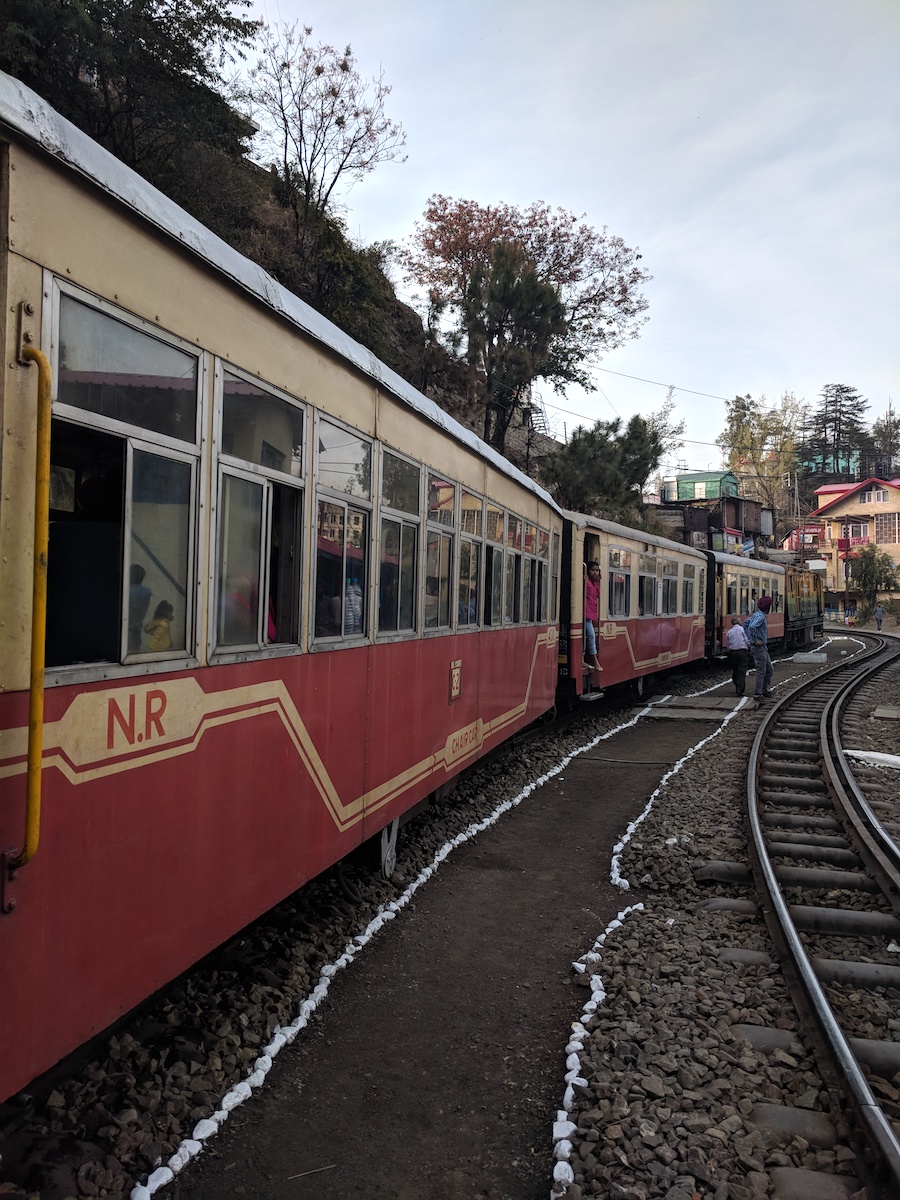 The Himalayan Queen on its way to Shimla.

With darkness approaching, we only had the chance to change into some warmer clothes, get a look at the twinkling lights of towns scattered along the ridges from the terrace and then settle down to dinner.

Each night, the elder father of the host of the homestay, Sharda, would join us at dinner for conversation while we ate. The rest of the family kept their distance. Mostly conversation was pleasant, though he did find fault with the way I ate almost everything (daal goes on rice not in a bowl, other main courses don’t get eaten with rice and go in small bowls not on your plate, paratha is not eaten with a fork but should be torn with your fingers and used to scoop curd, cold water should not be had after drinking hot tea, etc). Admittedly, I became a little self-conscious of eating with an audience and could have used a little more peace and quiet at meal time.

Day 2: Our first full day in Shimla also happened to be my birthday, so I hoped that my initial optimism about this little mountain town would be proved merited and that we would have a better day than many we’ve had in India. Luckily, my hopes panned out.

I started the day with a cup of coffee out on the terrace listening to birds chirping and taking in the views as the sun crept across the mountains casting light over more and more of the forrest below us. Then we had another delicious meal at our homestay before heading out to explore. 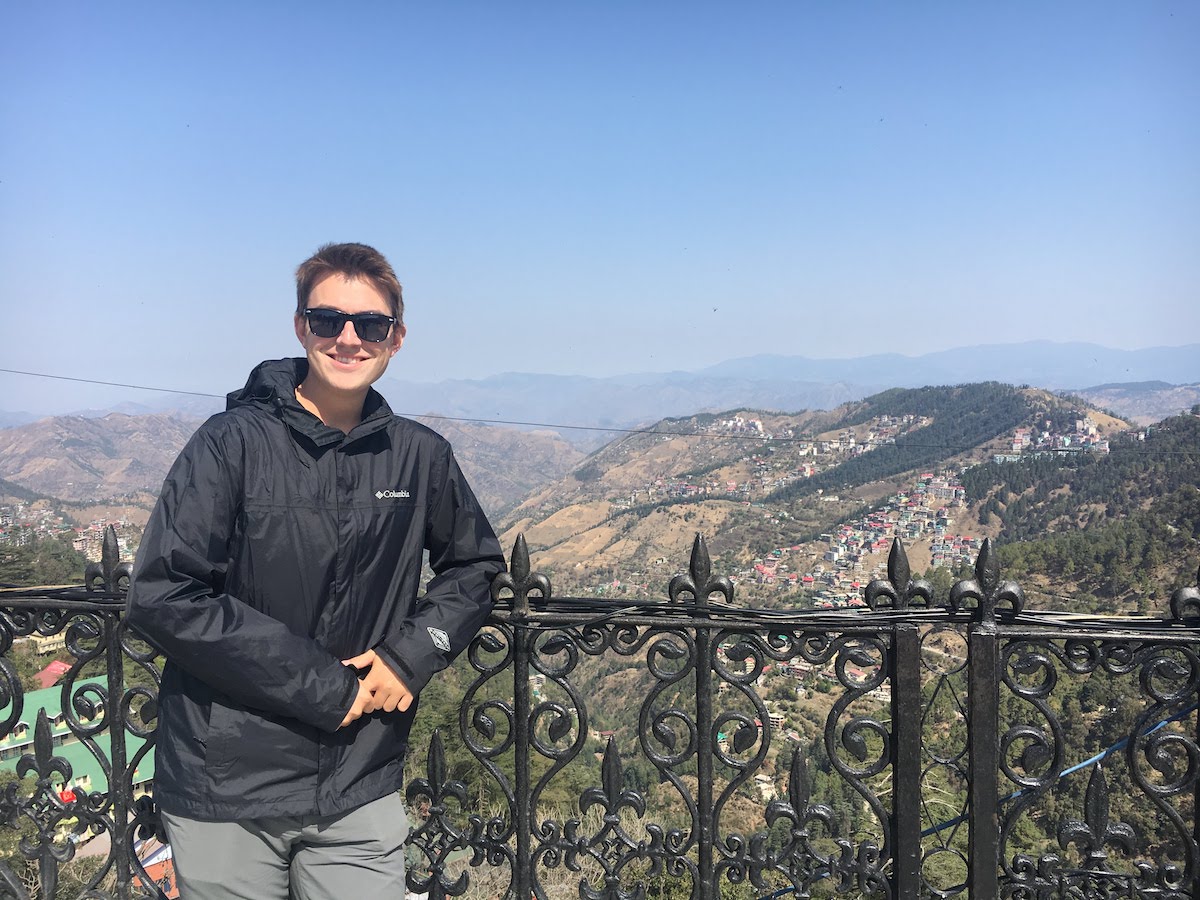 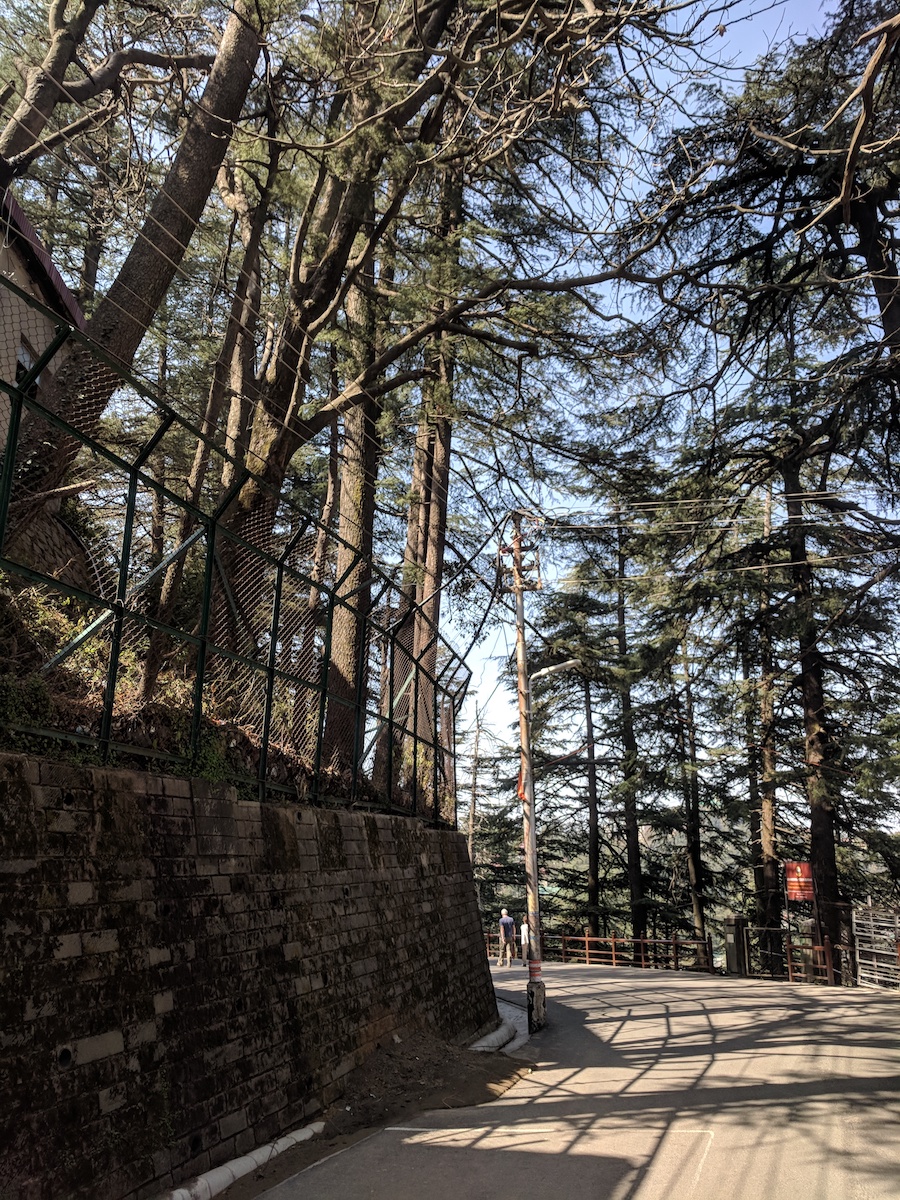 Left: The mornings were chilly on our terrace. Right: Part of our walk to IIAS.

Our main attraction for the day was the Indian Institute for Advanced Studies (IIAS), which sounds like a strange tourist destination but it was originally one of the British summer retreats and then became a retreat for the Indian President. The Viceregal Lodge is the main building and you can take a tour but when we arrived there was a two hour wait for a tour so we opted for the 20 Rupee (0.30 USD) tickets that give you access to the gardens around the lodge instead. 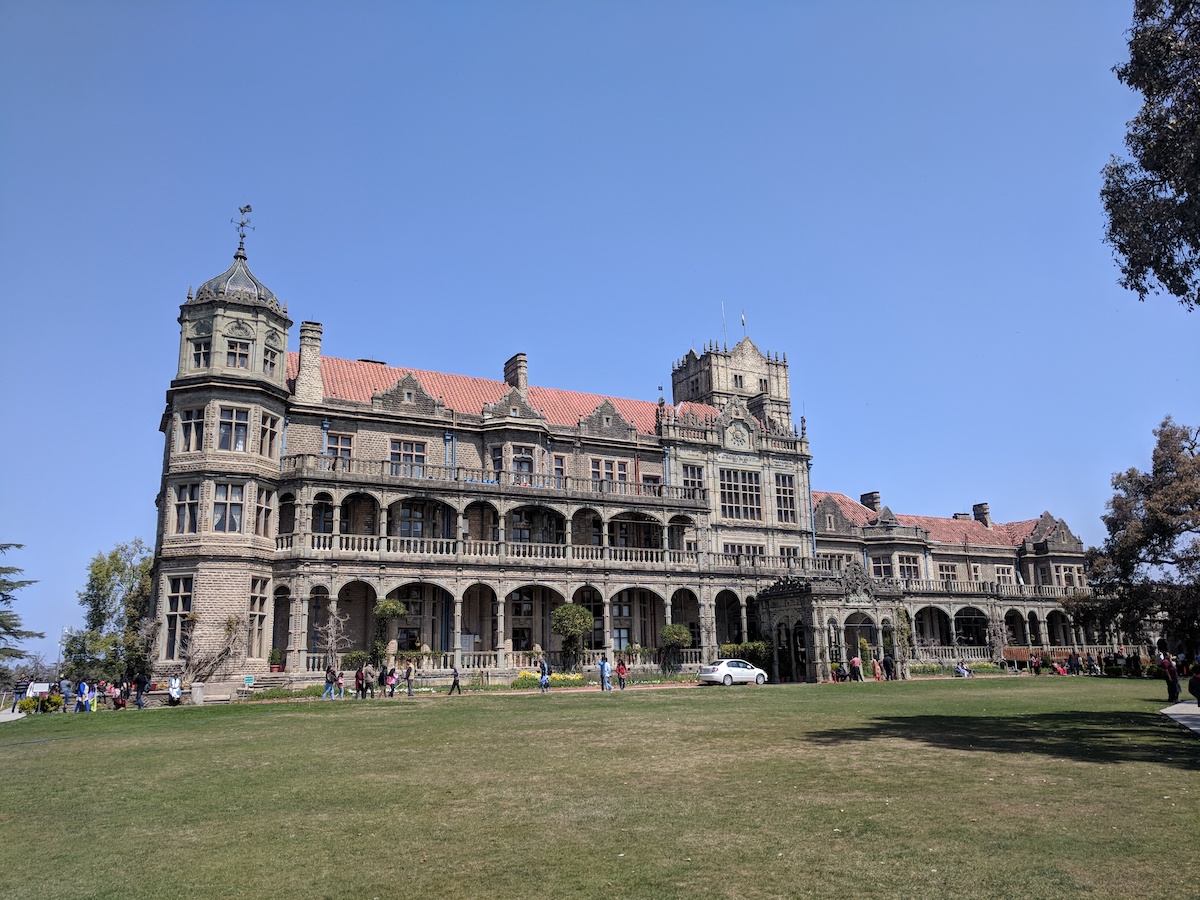 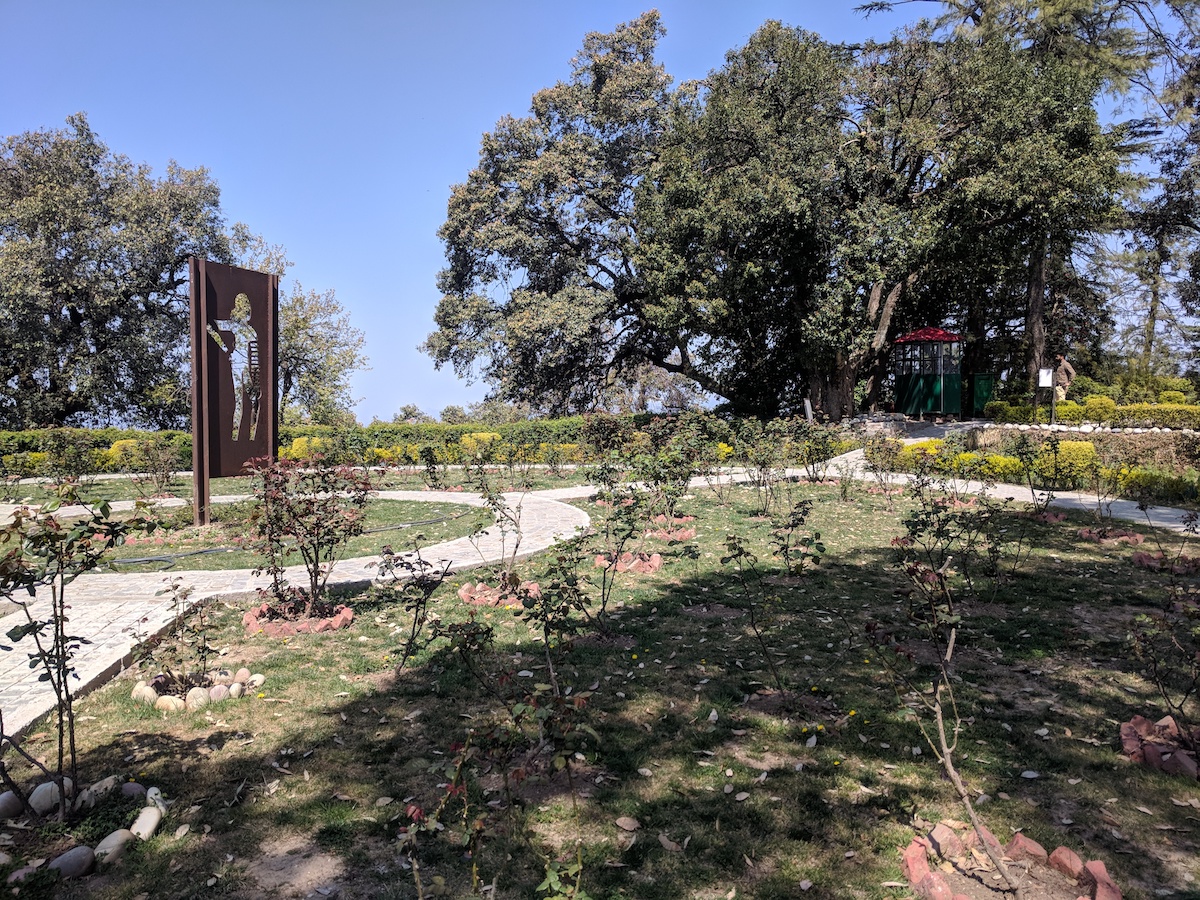 While the IIAS was our chosen destination, the journey to it was the real highlight. We had our taxi drop us off at the bottom of Mall Road, the main road through the town. Much of the street is blocked to traffic and except for a surprising number of ambulances we did not have to worry about cars for most of the three-mile walk to the IIAS. Mall Road winds its way just below the ridge line past plenty of small shops and restaurants, though many were closed on Sunday, past a large square, and then continues on through a pine forest toward the IIAS.

This was by far the most comfortable we’ve felt walking around in India. There were very few cars, fewer people, and other than the monkeys lurking just off the path nothing to cause us any trouble. 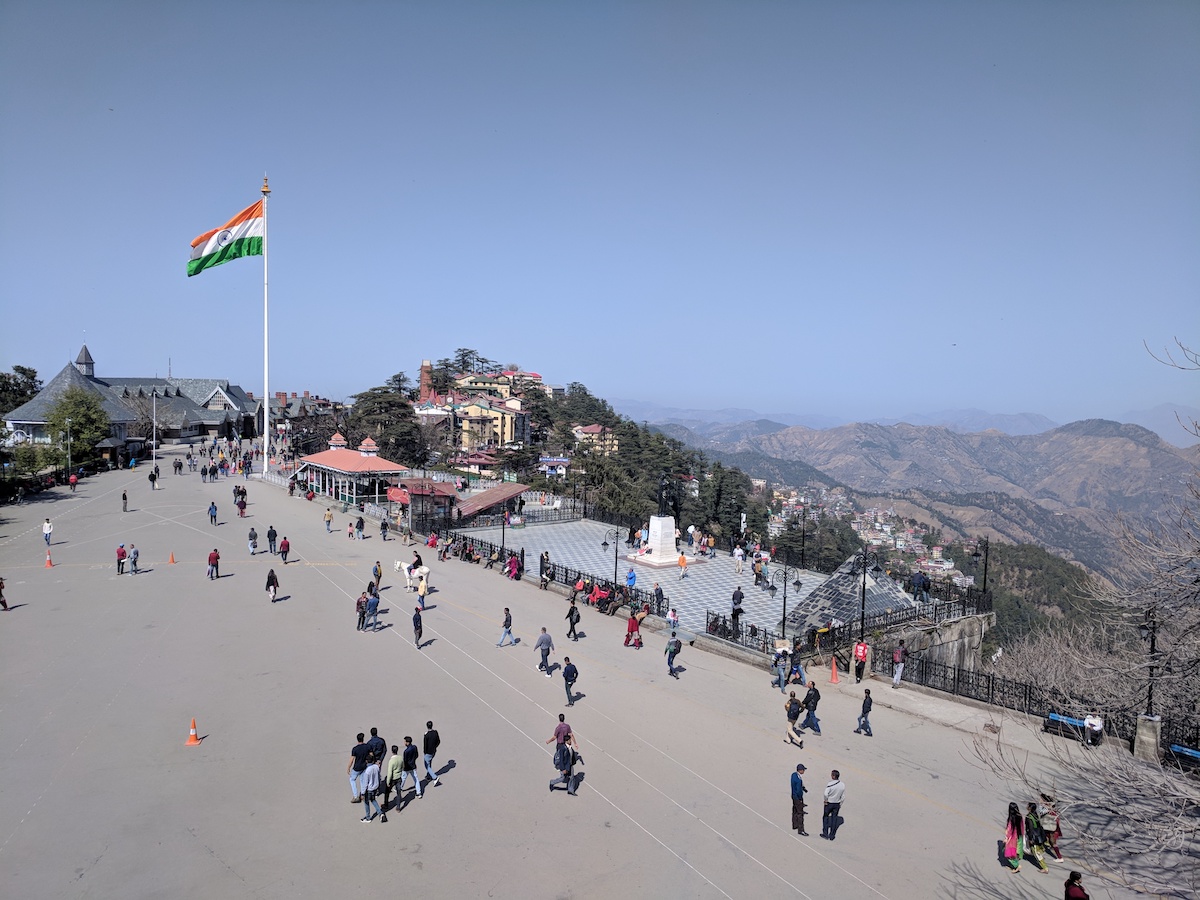 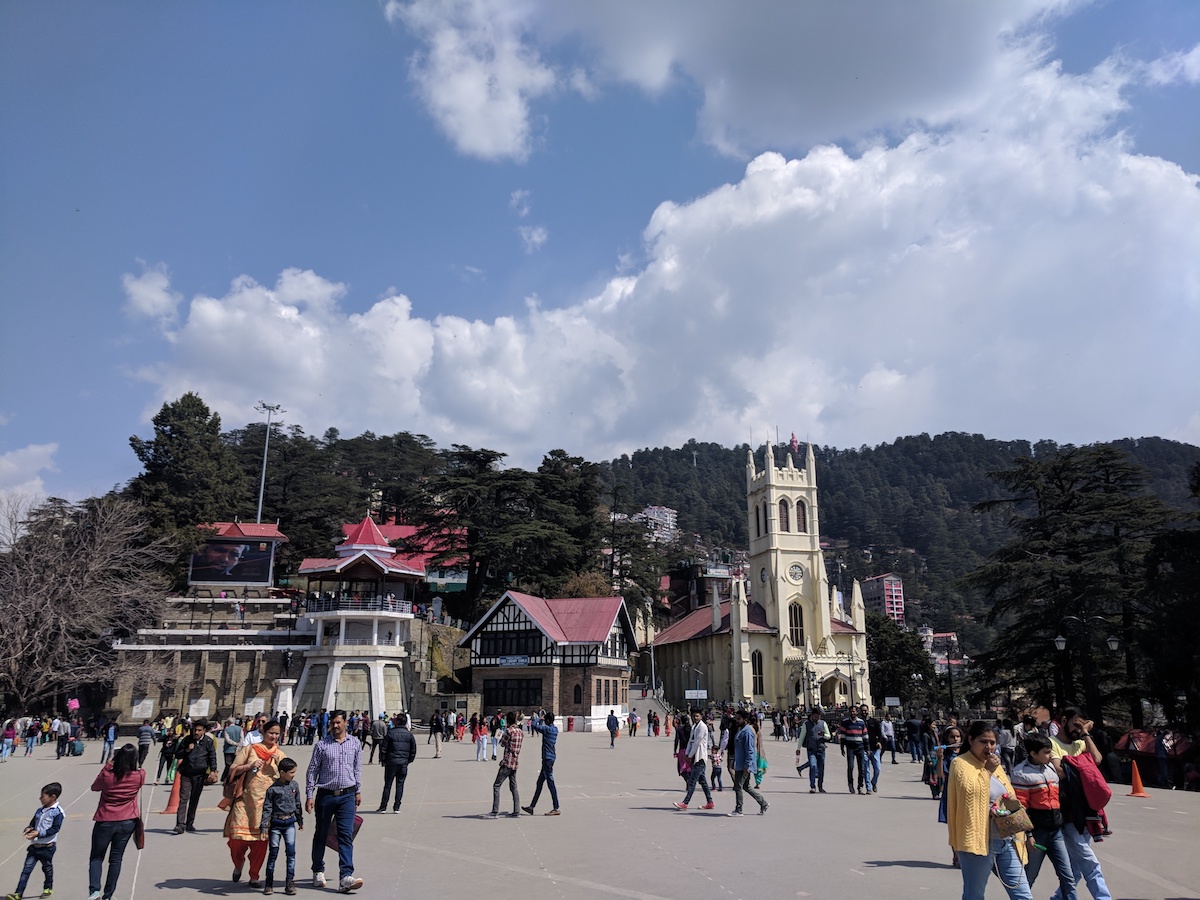 The Mall in Shimla.

We made our way back to town after enjoying the gardens at the IIAS to visit Honey Hut a themed restaurant that uses honey in all of its dishes. The restaurant was very cute but the decor outdid the actual food which was fairly mediocre. I was able to get a piece of apple pie, birthday pie is a tradition of mine. It wasn’t nearly as good as my usual homemade chocolate pecan pie but it made it feel more like my birthday.

After our six mile roundtrip walk we were getting tired and headed back to our homestay for a relaxing afternoon drinking tea, reading on the terrace, and then enjoying the sunset. 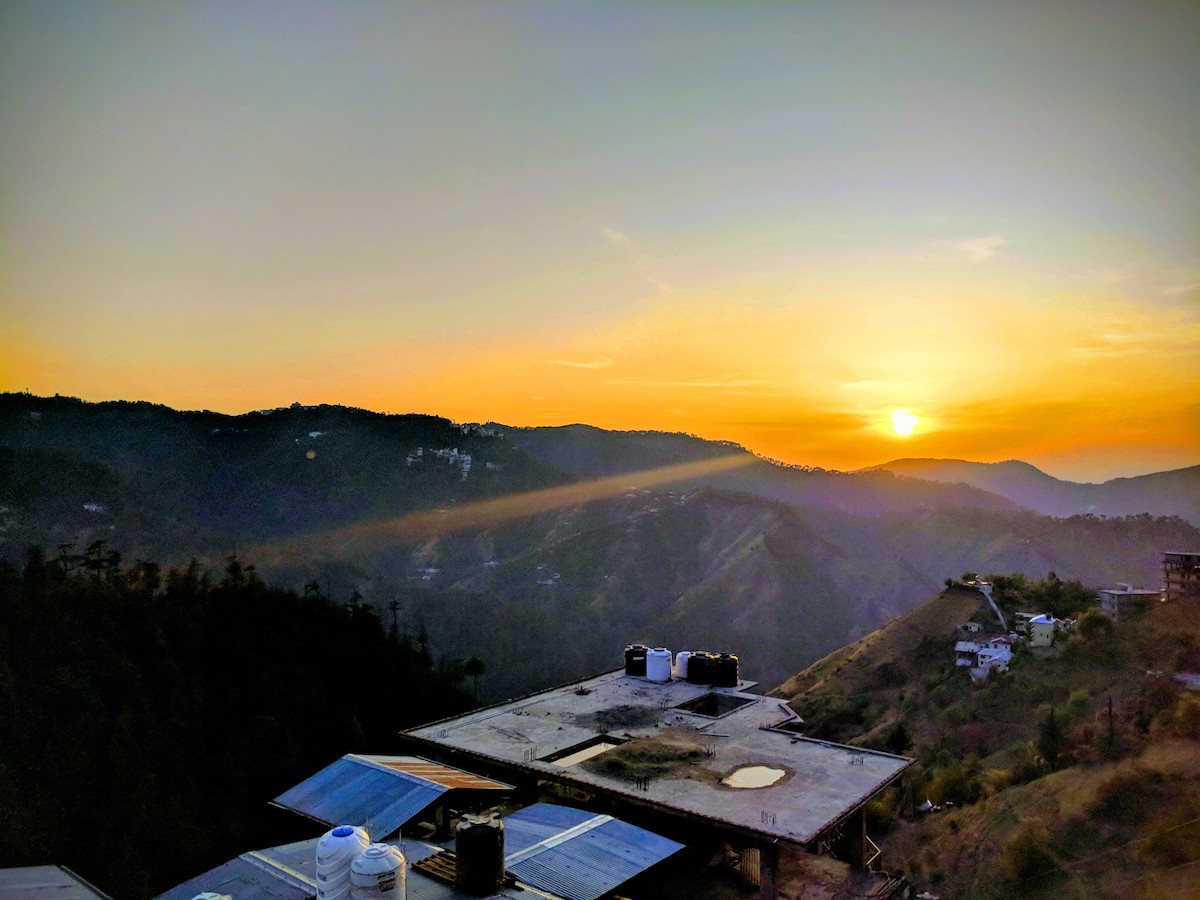 Day 3: We started our day just as we had the day before but once we got to Mall Road we headed the opposite direction toward Shimla’s Jakhoo or Hanuman Temple. Like the Monkey Temple we visited in Jaipur, this temple also required quite a hike though it was on the highest peak of Shimla instead of in the valley below. There is a cable car that you can take to the top but we wanted a little exercise. The Hanuman statue at Jakhoo is 108 feet tall and at altitude of over 8100 feet. For context, Christ the Redeemer in Rio de Janiero is 98 feet tall. Though I wouldn’t have believed it if I hadn’t fact-checked this myself based on our experience seeing the omnipresent Cristo as we walked around Rio. 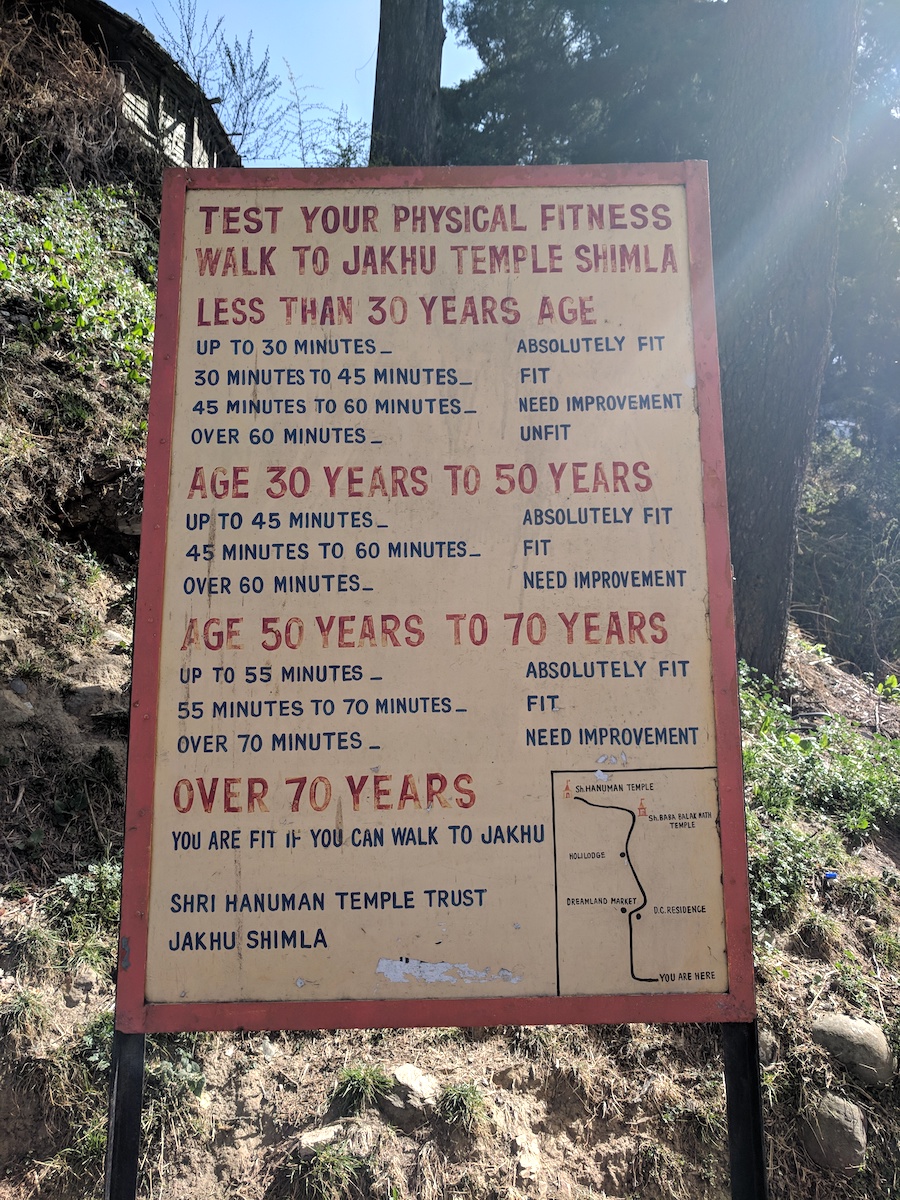 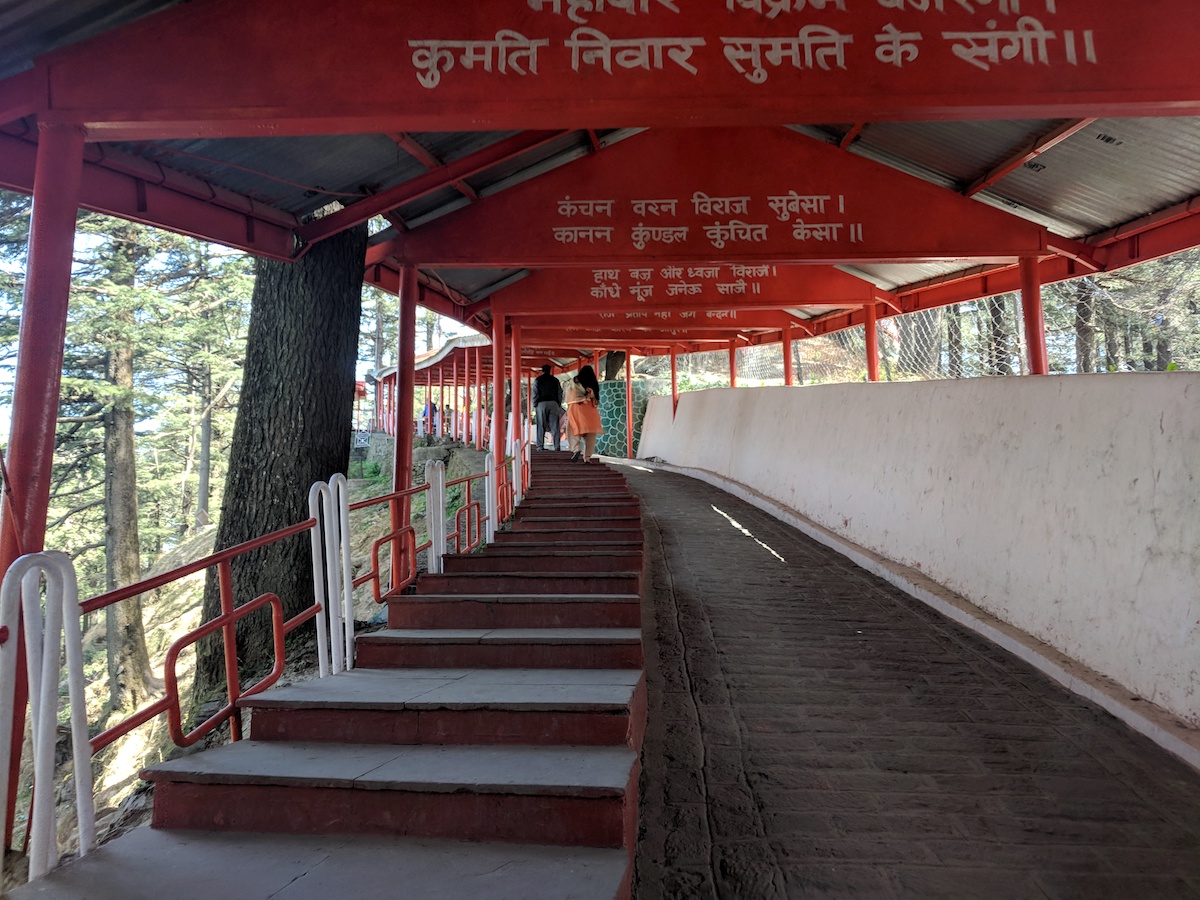 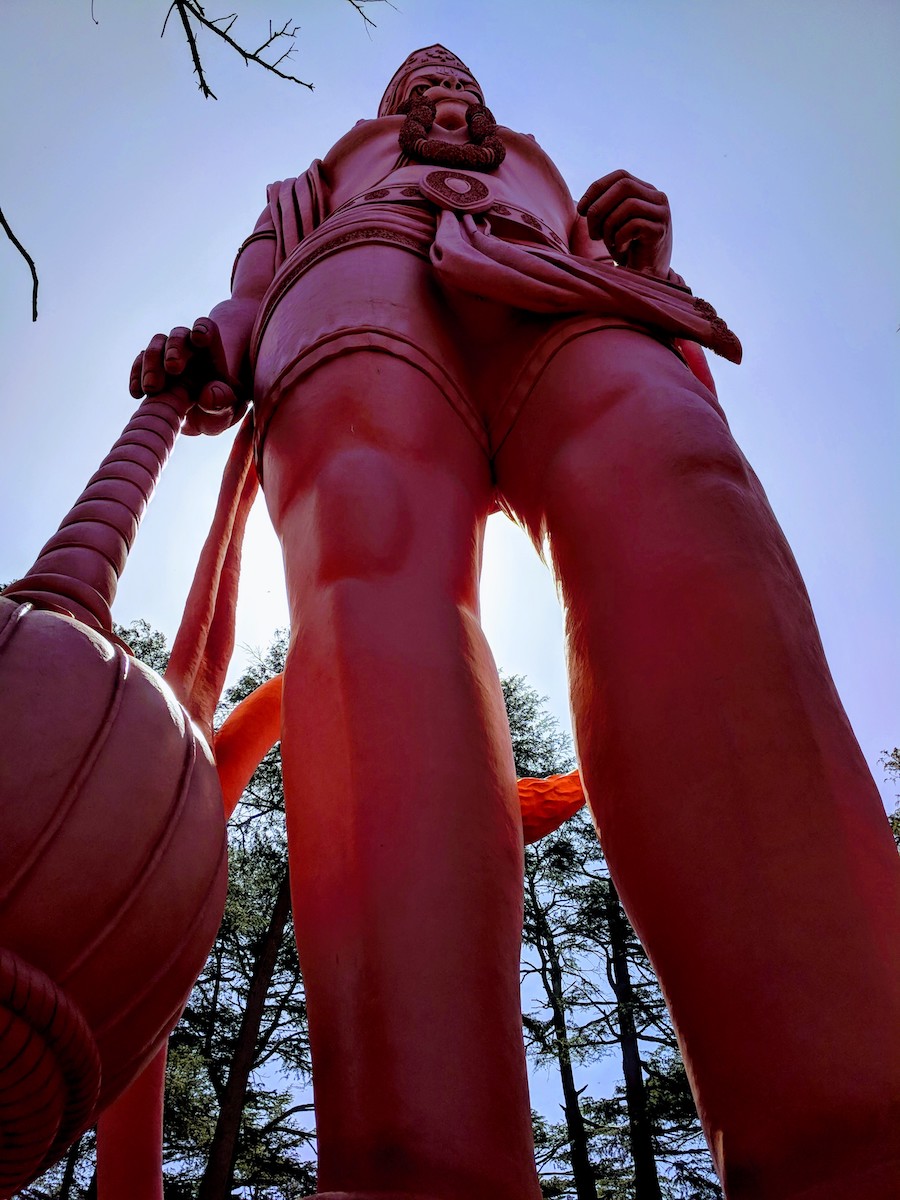 Once you make the climb, there is not much at the top of the mountain beyond the large Hanuman statue and a small temple. We didn’t venture into the temple but took in some of the views down into the valleys below before we headed back down into town. As should be true of any monkey temple, there were plenty of monkeys to be found around Jakhoo but lucky for us we had no issues despite the many warnings their mischief and lack of fear of people (some tour groups even had sticks that were supposed to be used to deter monkeys).

We stopped for lunch at the Indian Coffee House at Sharda’s recommendation and we were not disappointed. It is clearly a local favorite as we were the only people who required a menu to be able to order. The food was inexpensive and delicious. We had two dosas, a soup Nate ordered after seeing the table next to us enjoying it, two banana smoothies, and a coffee for a little over 5 USD total. 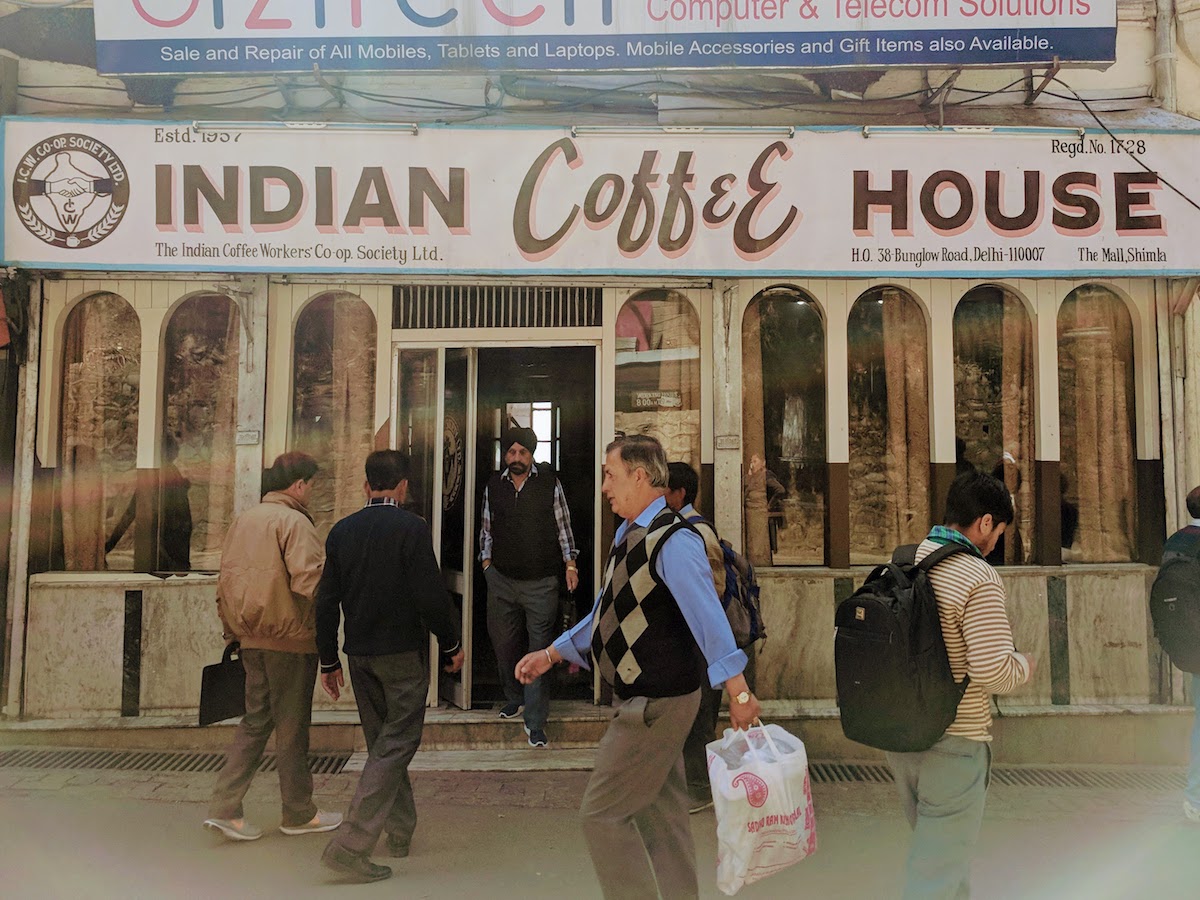 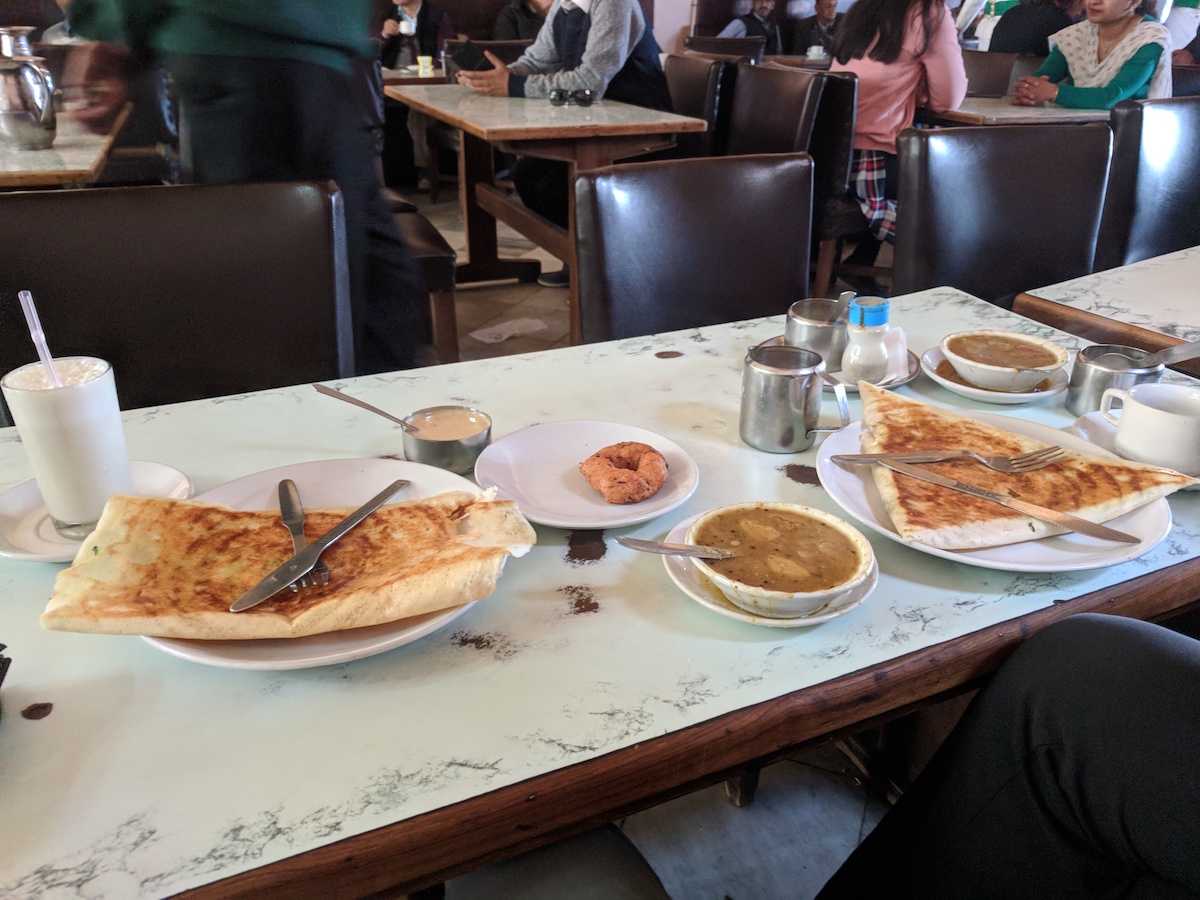 Like the day before, after lunch we headed back to wile away the afternoon reading and working on projects or just enjoying tea on terrace.

Unlike the day before, Sharda and his son had us join them on an evening walk along the road beyond their home before dinner. We spent a pleasant 30 minutes or so walking along the road as the sun set talking about trains in India, construction in the area, and civil service jobs in each country before heading back to enjoy our last homemade dinner.

Day 4: This was our last day in Shimla, though our train was not until 5:50pm. So after breakfast at our homestay, we got another taxi to Mall Road and made our way to the Himachal State Museum. We mostly just wanted something to do and somewhere to walk so we didn’t mind that it wasn’t the most interesting museum. There were exhibits on the army, stone work, and clothing of the area over time but my favorite was an exhibit of miniature paintings.

From there, it was back to Indian Coffee House for another delicious lunch of dosa and coffee. We decided to spoil ourselves a little after lunch though and stopped at the sweets shop called Baljees that Sharda recommended for a last serving of gulab jamun, our favorite indian style doughnut ball soaked in rose water syrup. We also tried rasgulla, a ball-shaped dumpling cooked in light sugar syrup, on Sharda’s recommendation but it didn’t hold a candle to gulab jamun.

With several hours before our train we decided that instead of taking the taxi back, we would just spend an hour walking. The road was pretty narrow but traffic was light after we got away from town. 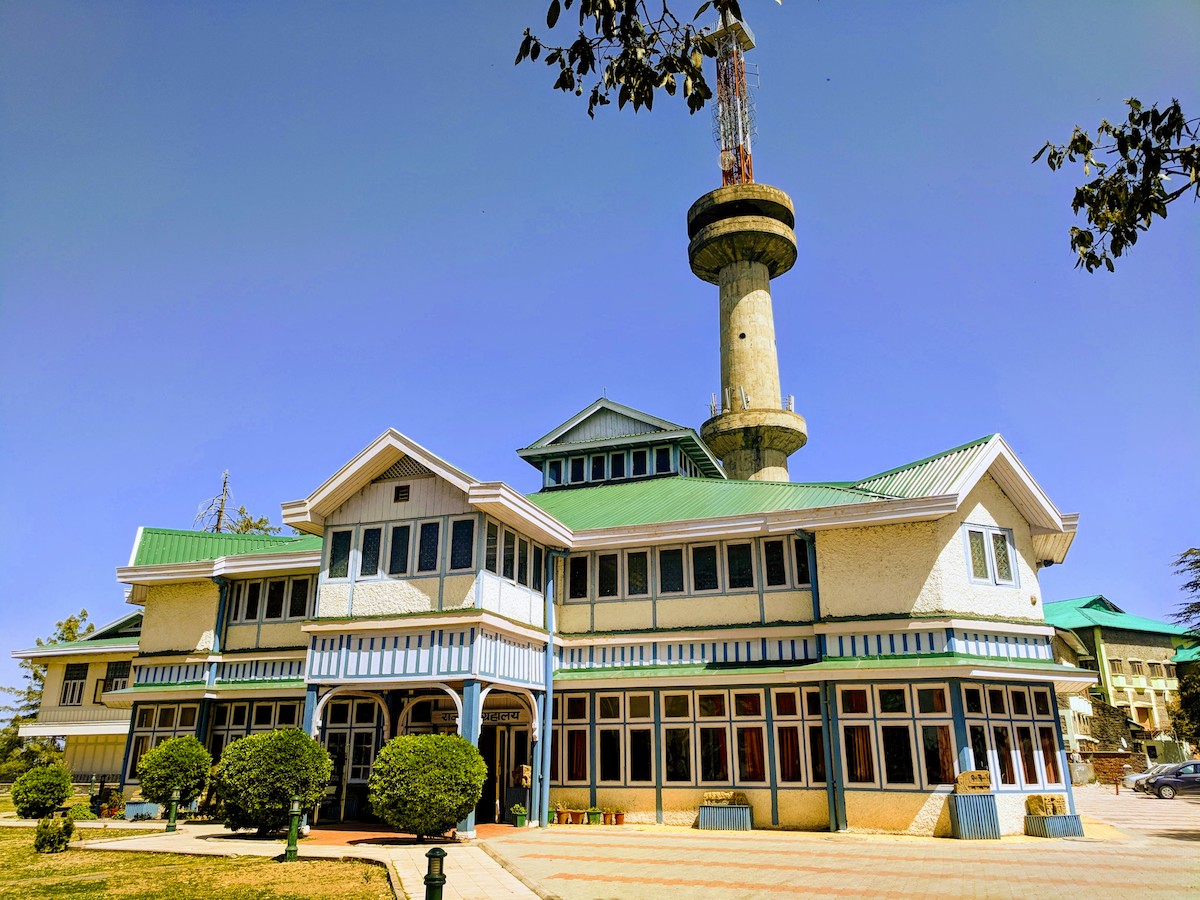 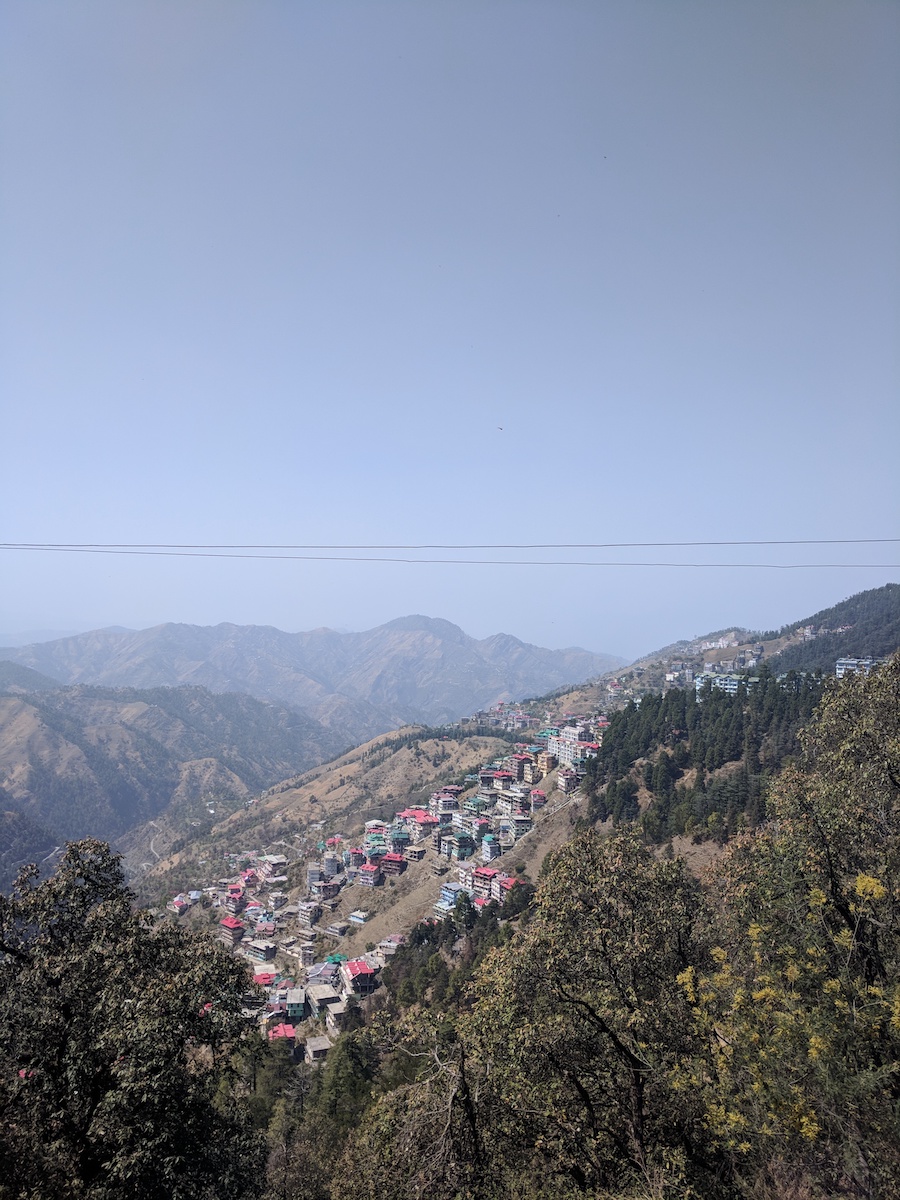 Left: The Himachal State Museum. Right: One of the many beautiful views along our walk back to our homestay.

With just enough time for a cup of tea, a little reading, and saying our goodbyes; we got a ride from Asheesh (they really went above and beyond to take care of us) to the train station and made our way back to Delhi and our onward flight to Tokyo.

Shimla ended up being our favorite destination in India. While it wouldn’t fit the image most people have of India, it was lovely and we were very glad to have ventured away from Delhi and the Golden Triangle to a quieter side of India.

For our time in Shimla, we had budgeted as much as 45 USD a night for accommodations. We ended up spending 73 USD per night to stay at the really-lovely Vatsalyam Homestay. It turns out that since Shimla is such a vacation destination for rich Indians, there are not many cheap accommodations available. Luckily, we had budget leftover from elsewhere in India to make this work. We had also budgeted 10 USD per day per person for food and 10 USD per day per person for entertainment. Out of that planned 40 USD total, we ended up spending only 29 USD per day on average, with our biggest expense being the nightly dinner at the homestay, which was 7 USD per person (a bit pricey for India, but well worth it to have delicious food appear on demand!). 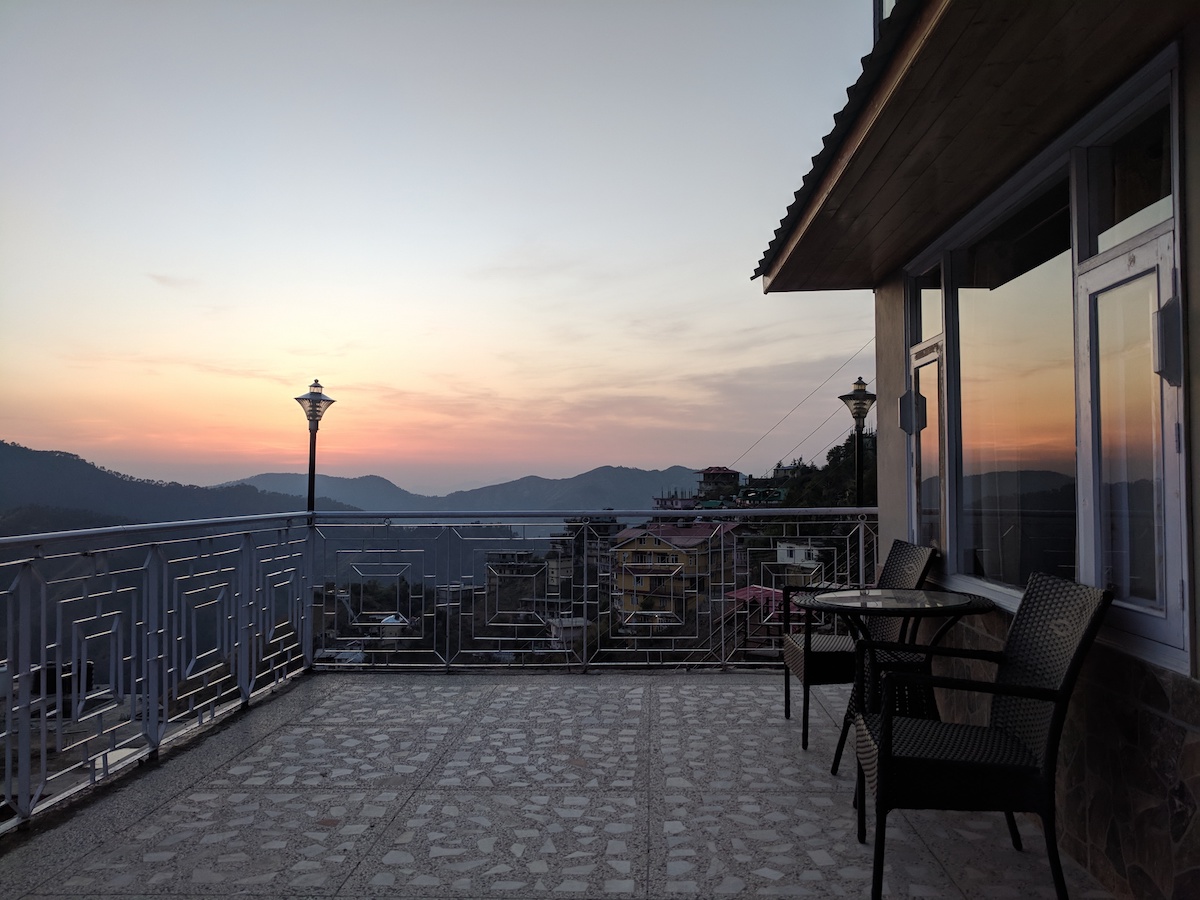 « New Delhi: Smog in the City
Northern India by 9 Trains »