London: All of the Parks

On the Millenium Bridge, looking toward London Bridge and Tower Bridge.

Despite flying through London Heathrow to and from North Carolina last month, I had never actually been to London, or anywhere else in the U.K. Amy had been plenty of times, and I’ve been feeling pretty touristed-out, so we skipped most of the big things (no Changing of the Guard for us!) and enjoyed one of the last weeks of our trip as much as we could.

We stayed at an Airbnb in the Kensal Rise area, which was as close to city center as we could really afford, despite being a ~30-minute Tube ride from the Thames. We lucked out with the weather, spent almost all our time outdoors, and lucked into seeing Hamilton(!!!) with face-value tickets. Success!

What We Did in London

We picked up Oyster transit cards at the airport when we landed in London and used a weeklong pass to get around as much as we pleased. Ultimately we ended up taking just two trips most days, into the city and then back out, while just walking around in between. We probably could have saved a few dollars by paying as we went instead of doing the pass, since we didn’t end up crisscrossing the city by Tube throughout every day, but it was really nice to have the flexibility to do whatever we wanted without having to think about the incremental cost.

We’ll also be able to use the Oyster card when we’re briefly back in London between Paris and our flight down to Mauritius in a couple of weeks, which will save us some money.

Amy remembered that London is one of the cities where Hamilton now has a show running–we had been wanting to see it basically ever since it came out but could never justify $500+ for tickets and a trip to NYC to see it–and found out that they’ve made resale impossible so if you can’t go, your tickets are returned and sold at face value by the venue. This means that with a bit of luck, and a bit of persistence, we were able to snag two tickets with less than a week’s notice, for under £100 each! We have built up a nice budget surplus so this seemed like a great splurge. 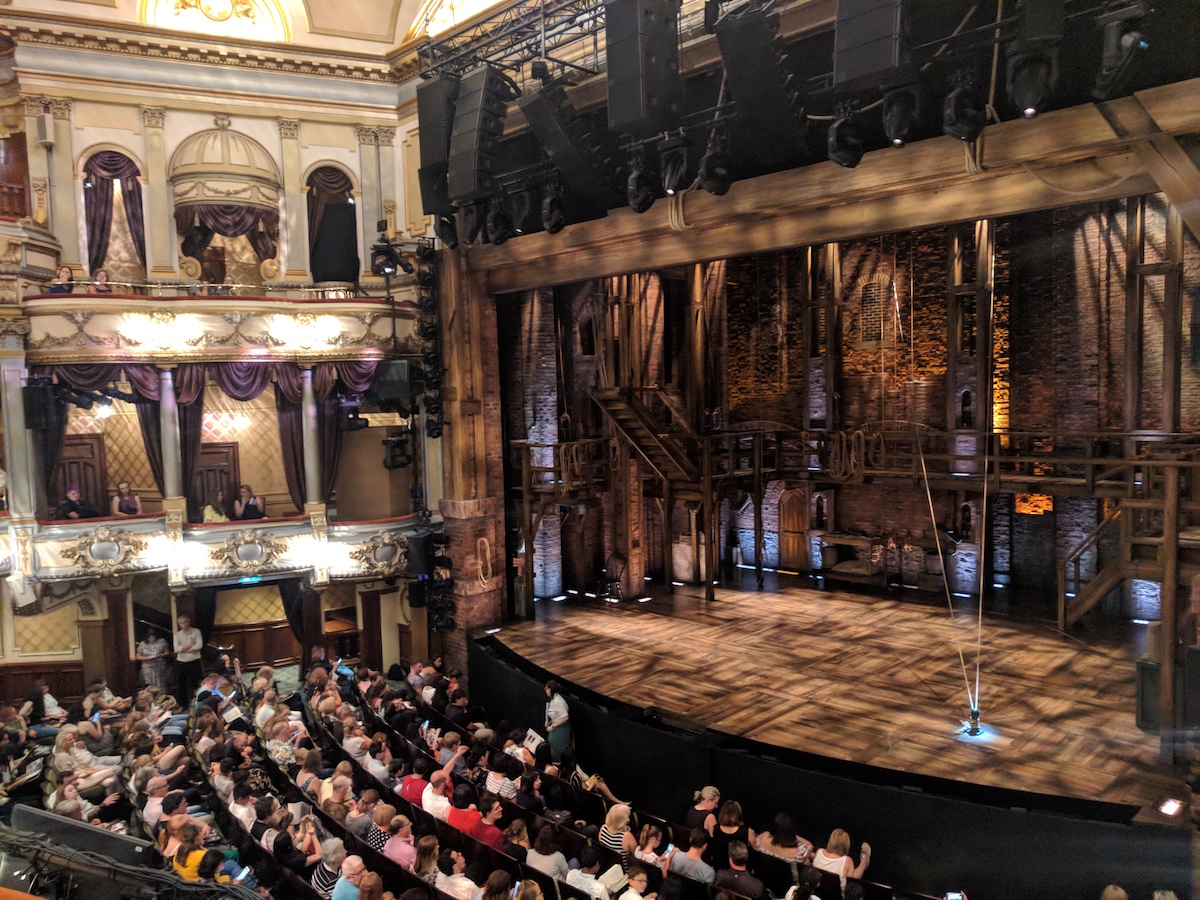 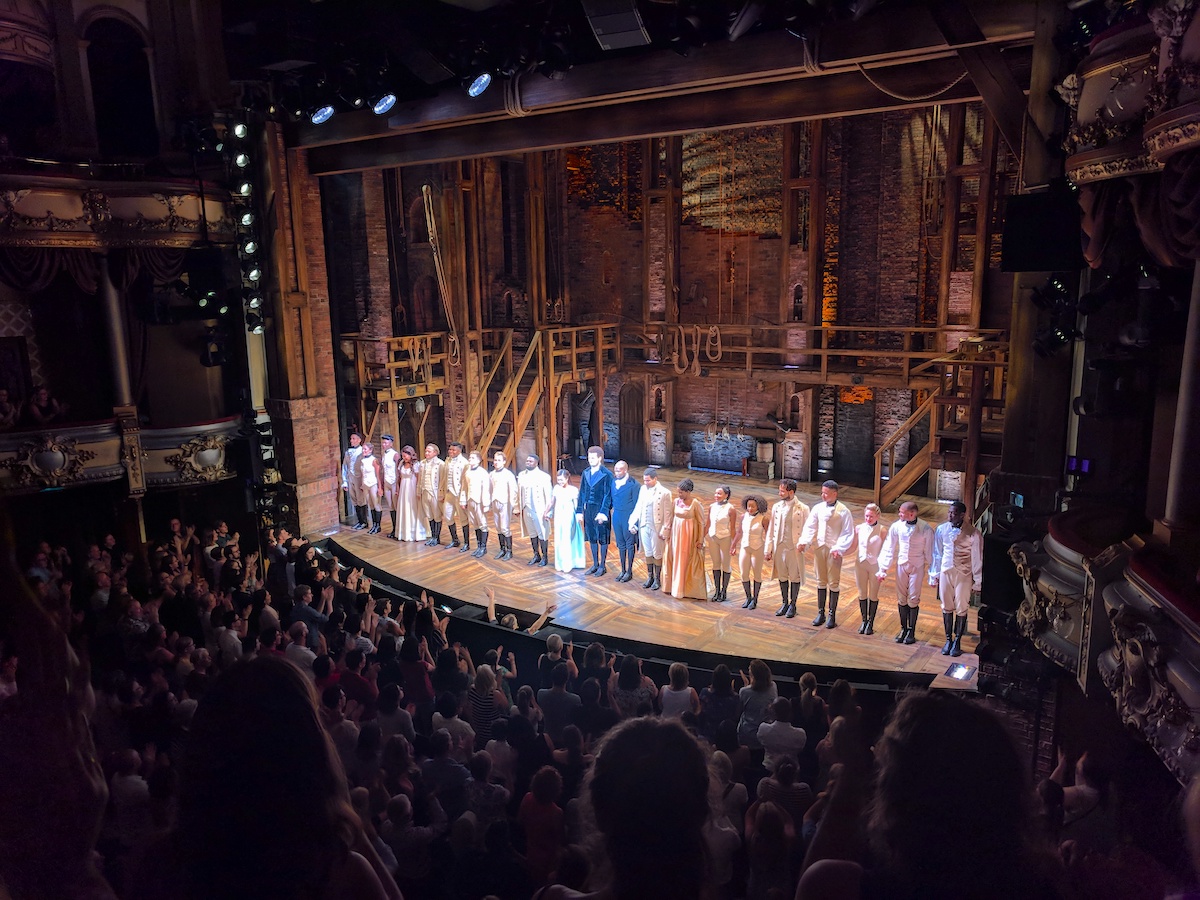 We ended up going for a Thursday matinee and sitting in the third row of the first balcony tier, all the way over on the right side. When I saw the seat numbers (after buying the tickets) I was a bit worried we’d be too far off to the side to really enjoy it, but our seats ended up being fantastic. We could see everything easily and felt like we were right on top of the stage the whole time.

Of course, the show was amazing. We obviously can’t compare it to what the original Broadway cast was like, but everyone in our performance did a great job. One thing I hadn’t understood is just how little dialogue there is–almost every single word in the musical is part of a song, with almost no downtime between them. Especially in the first act it can be hard to catch your breath as they move so quickly from song to song and through history. Really glad we decided to splurge on this!

For the most part, we got extremely lucky with the weather while we were in London. After a big, slow thunderstorm our first evening, we enjoyed upper-70s/low-80s and sunshine for the rest of our stay. This was really lovely, as we spent most of our time outdoors exploring London’s many parks and meandering through its different neighborhoods. 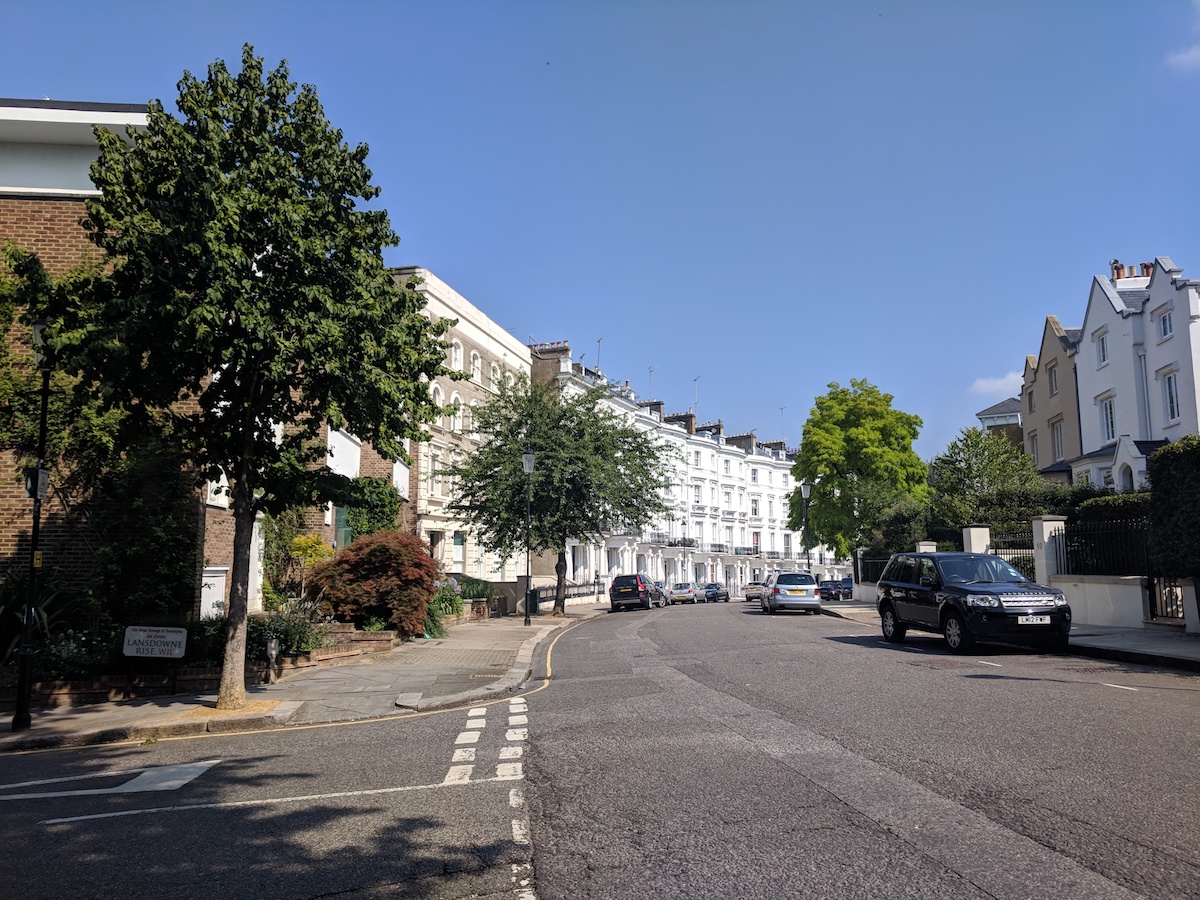 Our first morning, we walked down from our Airbnb to Portobello Market, a weekly flea market and street fair, and then into the famous Notting Hill neighborhood. While the houses are definitely nice, the strict uniformity of every property is a little crazy to me. We finished up our walk by spending some time in Holland Park, which was bigger than we expected and included some peacocks randomly roaming the grounds. Our favorite park of the park was its Kyoto Garden, a small area groomed to look like a Japanese garden that effectively transported us back to our time in Japan, which was one of our favorite countries on the trip. 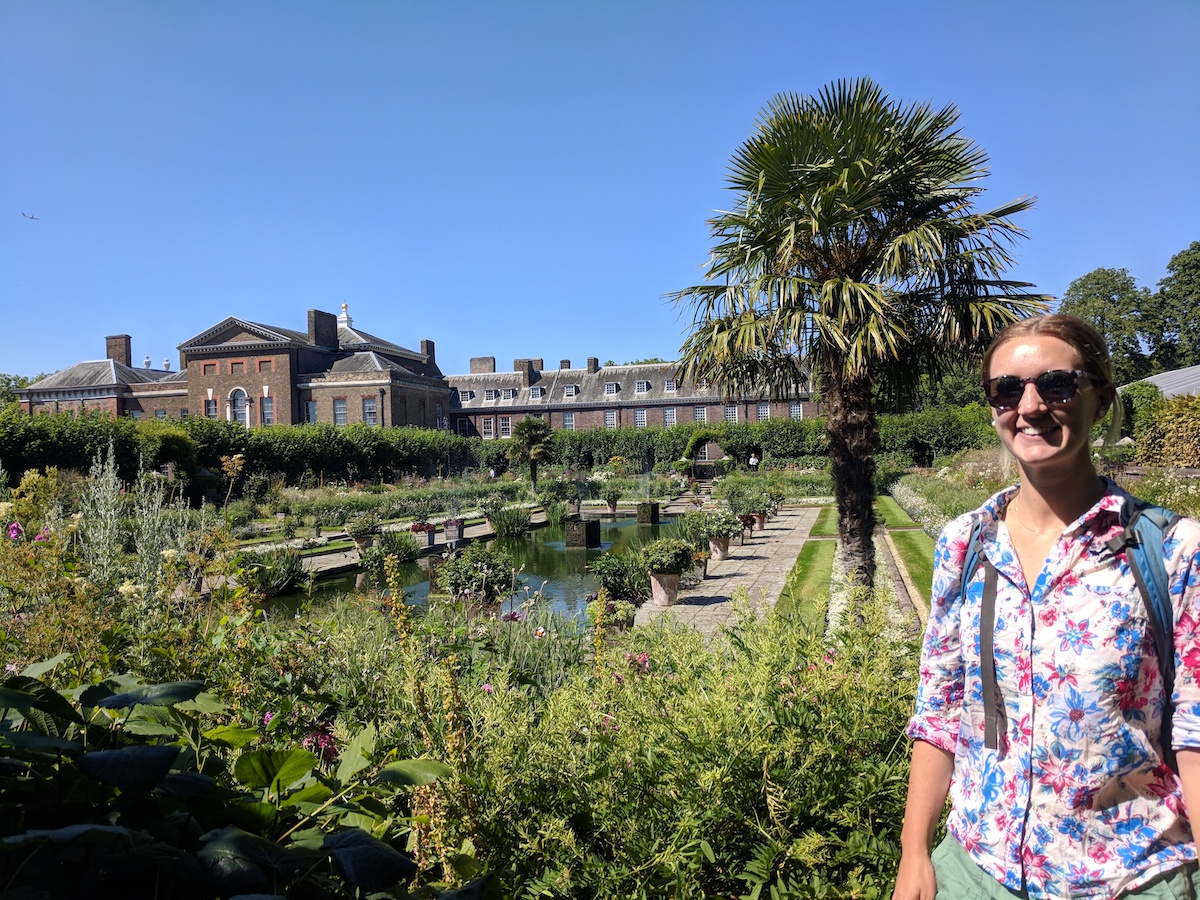 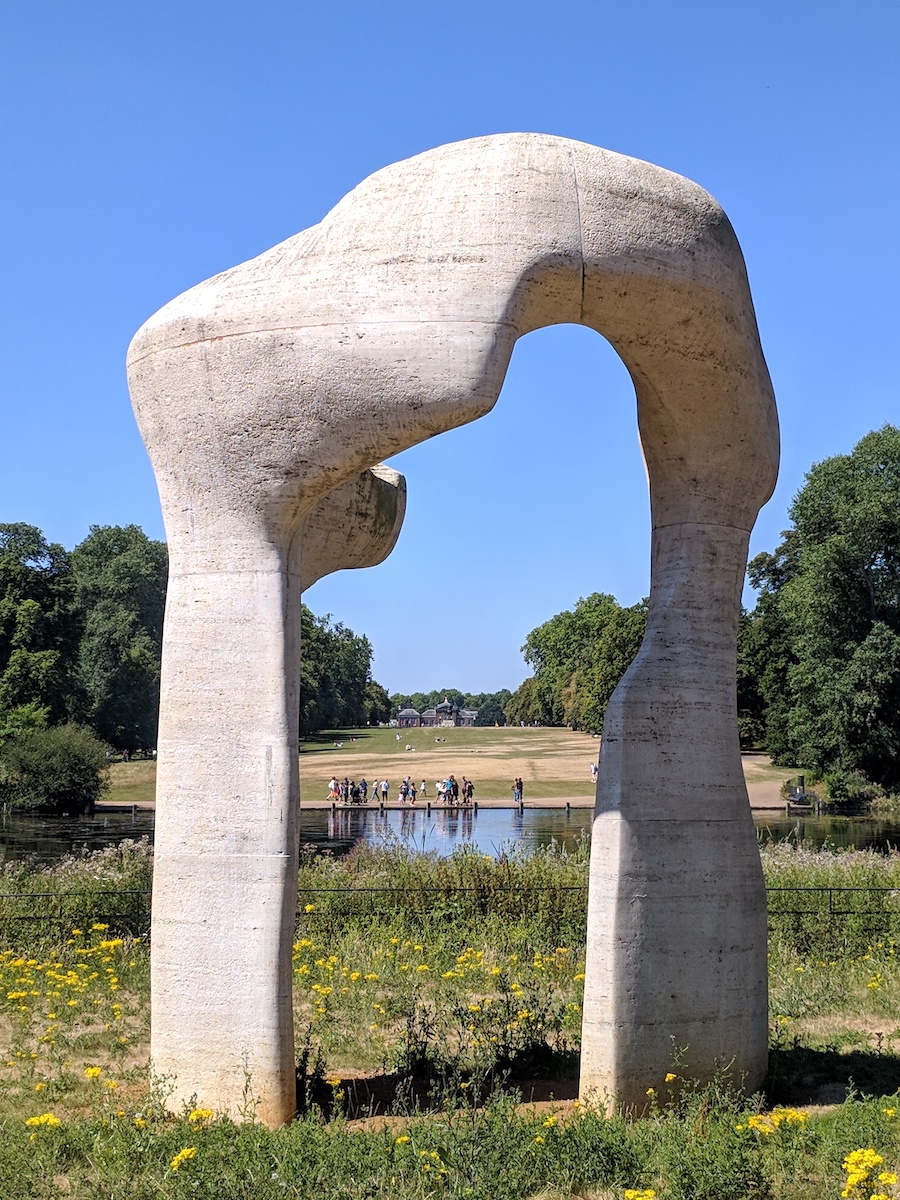 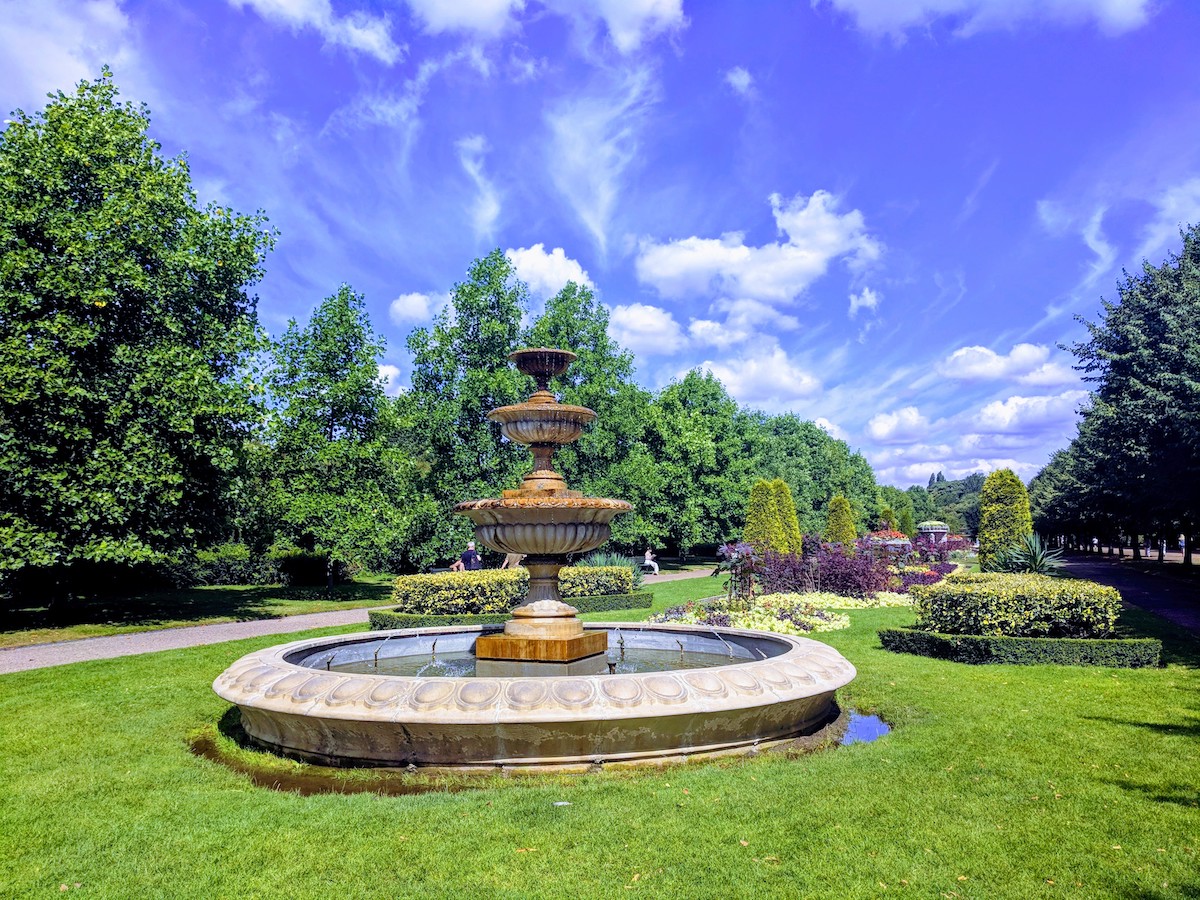 Closer to downtown, we also spent time in Kensington Gardens, Hyde Park, St. James Park, and The Regent’s Park. All are nice, big green spaces that really feel like an escape from the encircling urban areas. I really wish DC had more green space like this interspersed throughout the city, rather than just concentrated in a couple huge areas. My favorite of these was probably Regent’s, as it was a bit further from downtown, quieter, and with more variety. 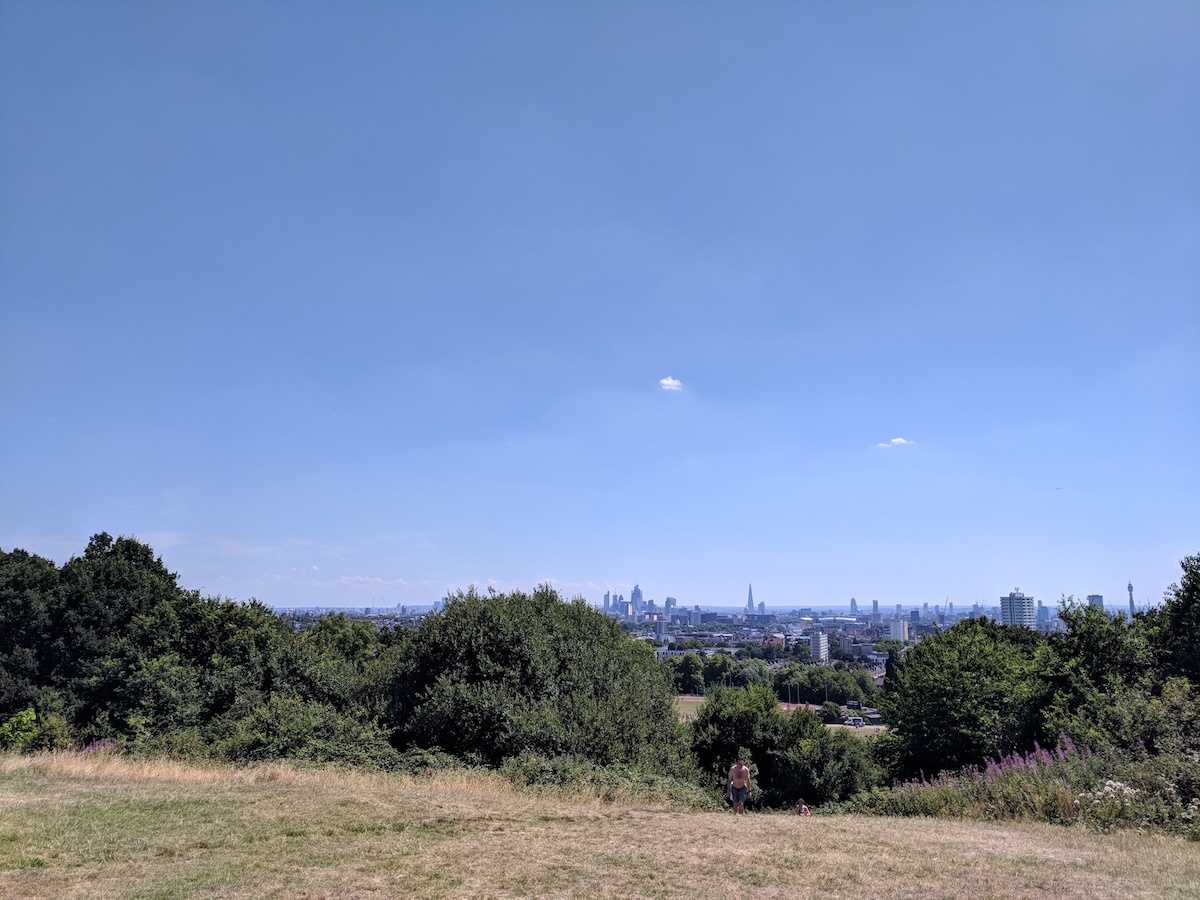 We also took a local bus up to Hampstead Heath, a large park on the north end of the downtown area. We didn’t do our research properly before going and ended up being some of the only people there not in swimsuits to take advantage of the maintained swimming holes. Oh well! We did make it up to the Parliament Hill viewpoint which looks down across the entire city and had the best views we saw all week. 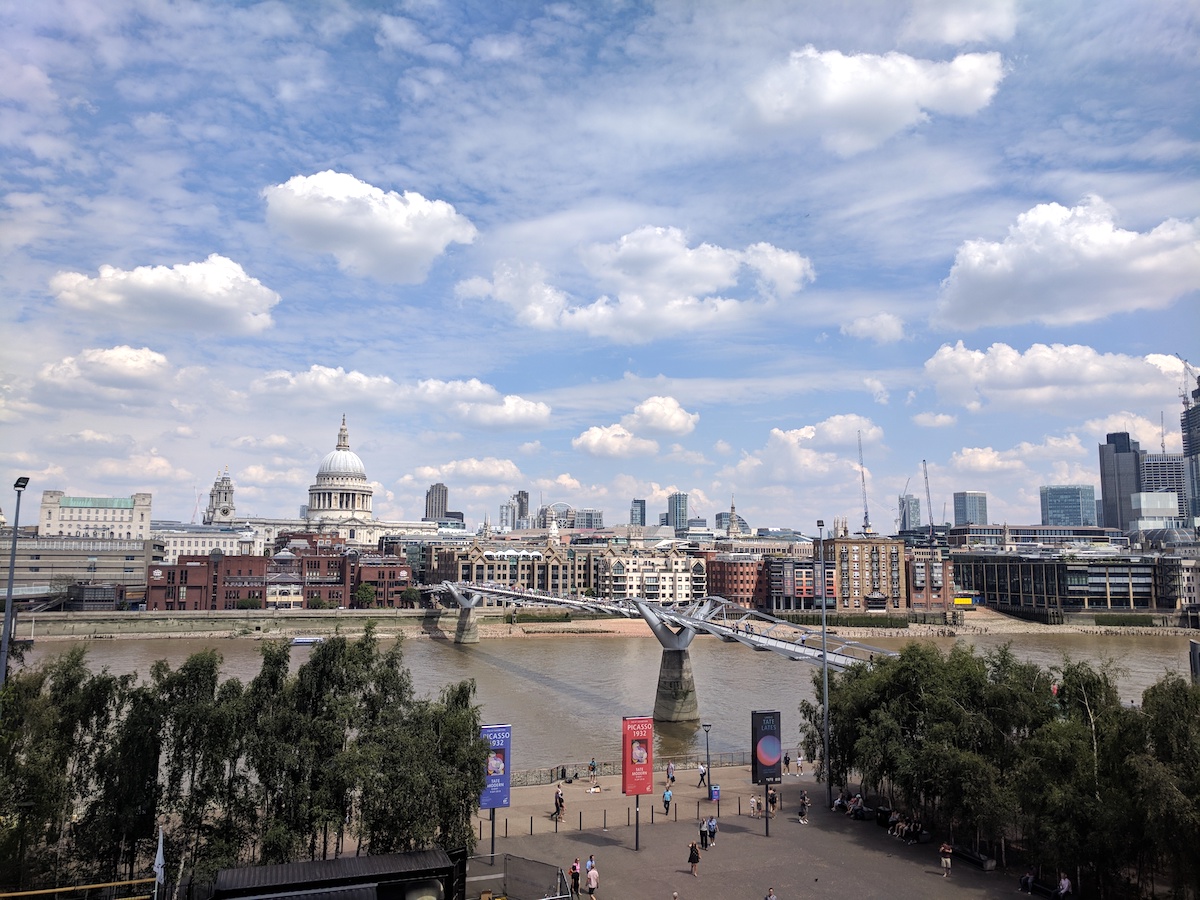 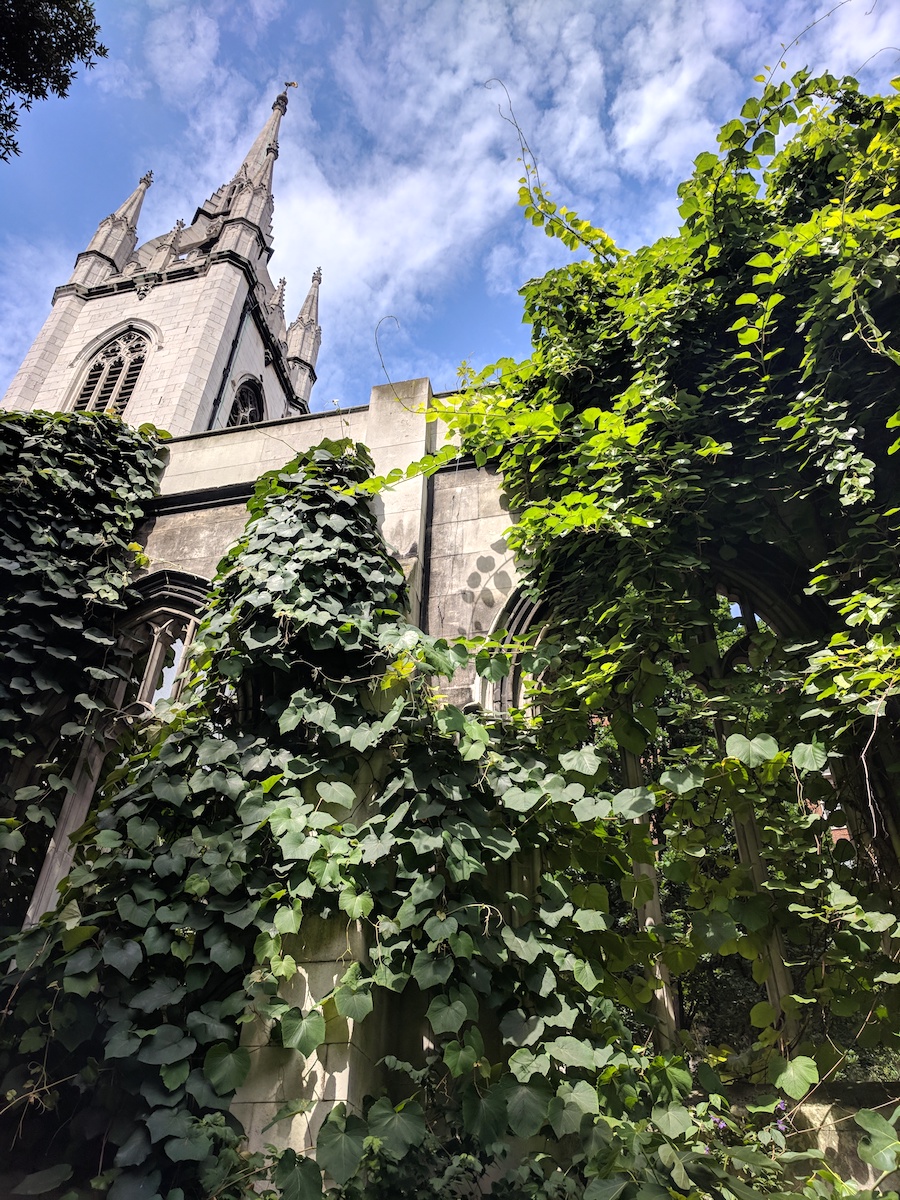 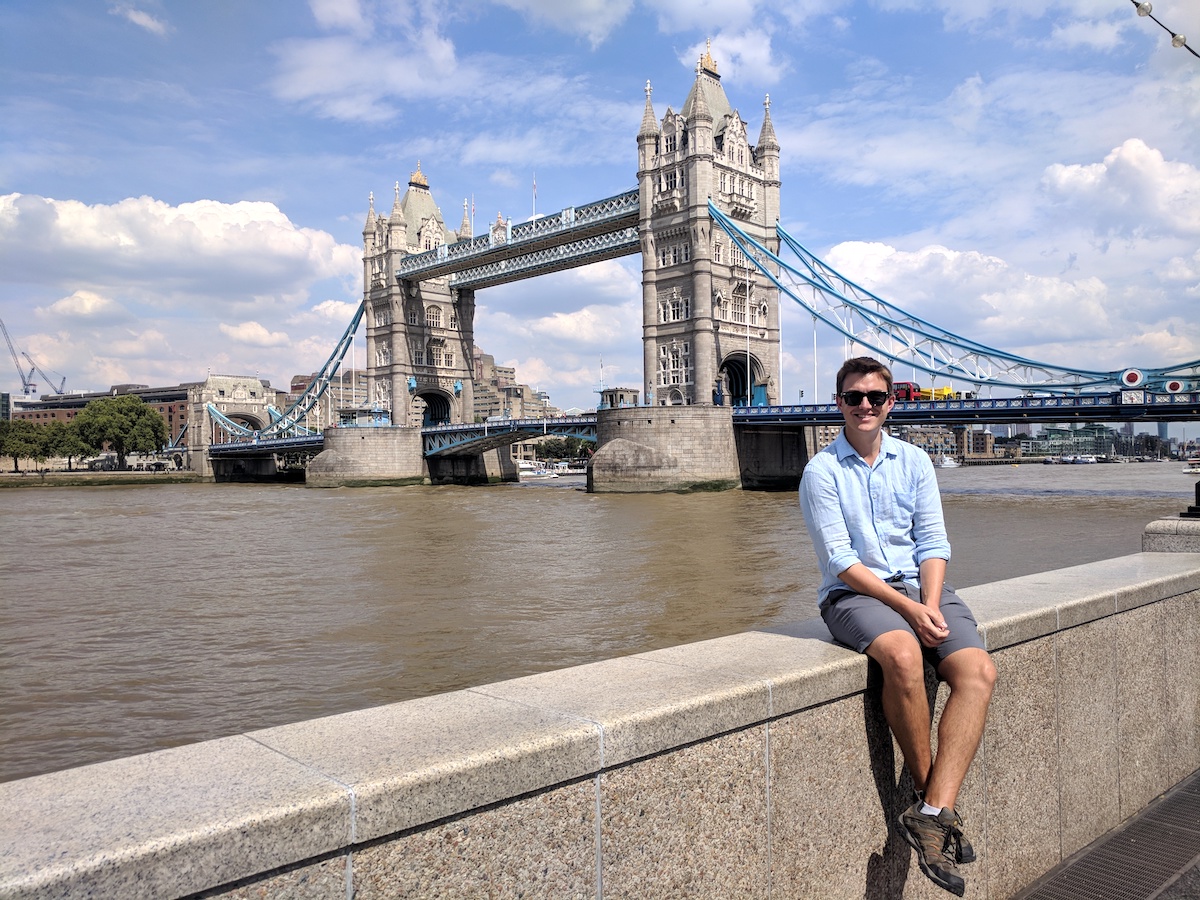 Another of our mostly-outdoor days we spent walking along the Thames through downtown, from Big Ben (currently under renovation) all the way to Tower Bridge. There is a good path most of the way, though it does require crossing the Thames a couple times to stay off busy streets. Partway through we stopped at the Tate Modern museum whose free entrance grabbed our attention. It turns out you have to pay to enter many of the individual exhibits, but we still got to see a few exhibits, got some air conditioning and a bathroom break out of it! My favorite stop on this walk was St Dunstan-in-the-East Church Garden, which has the partial remains of a church largely destroyed in WWII encircled by a small public garden. It really feels like the vines are taking back the building, so its a fun pitstop along the way. We didn’t end up going up in Tower Bridge, as we were hungry by that point, and the line didn’t look too fun… 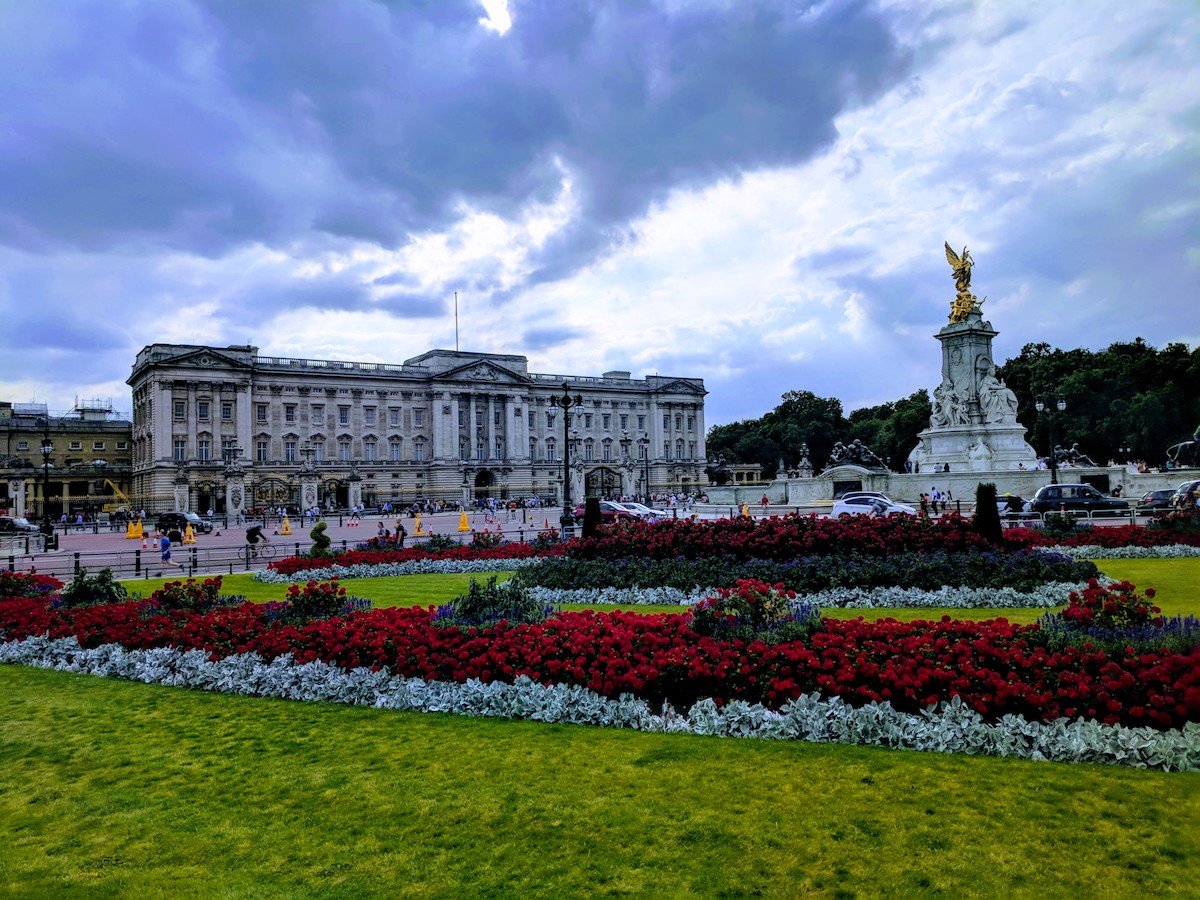 We also popped into the National Gallery for a brief visit, since it also has free entry and Amy wanted to see Van Gogh’s sunflowers. After realizing they had one of Leonardo da Vinci’s more famous paintings we spent a few minutes re-reading the section on it from Leonardo da Vinci by Walter Isaacson, which has been a great resource, only to then find out the room it was in is temporarily closed. Bummer! 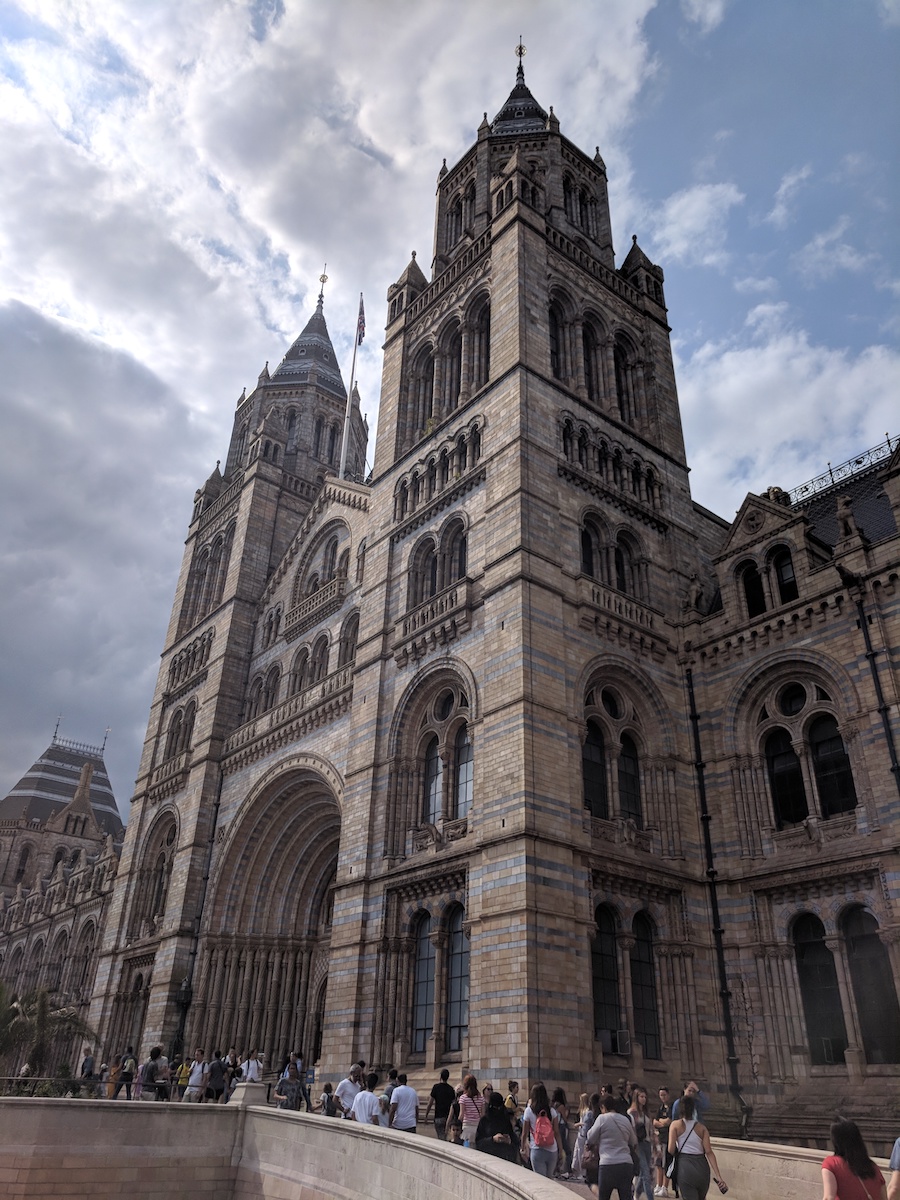 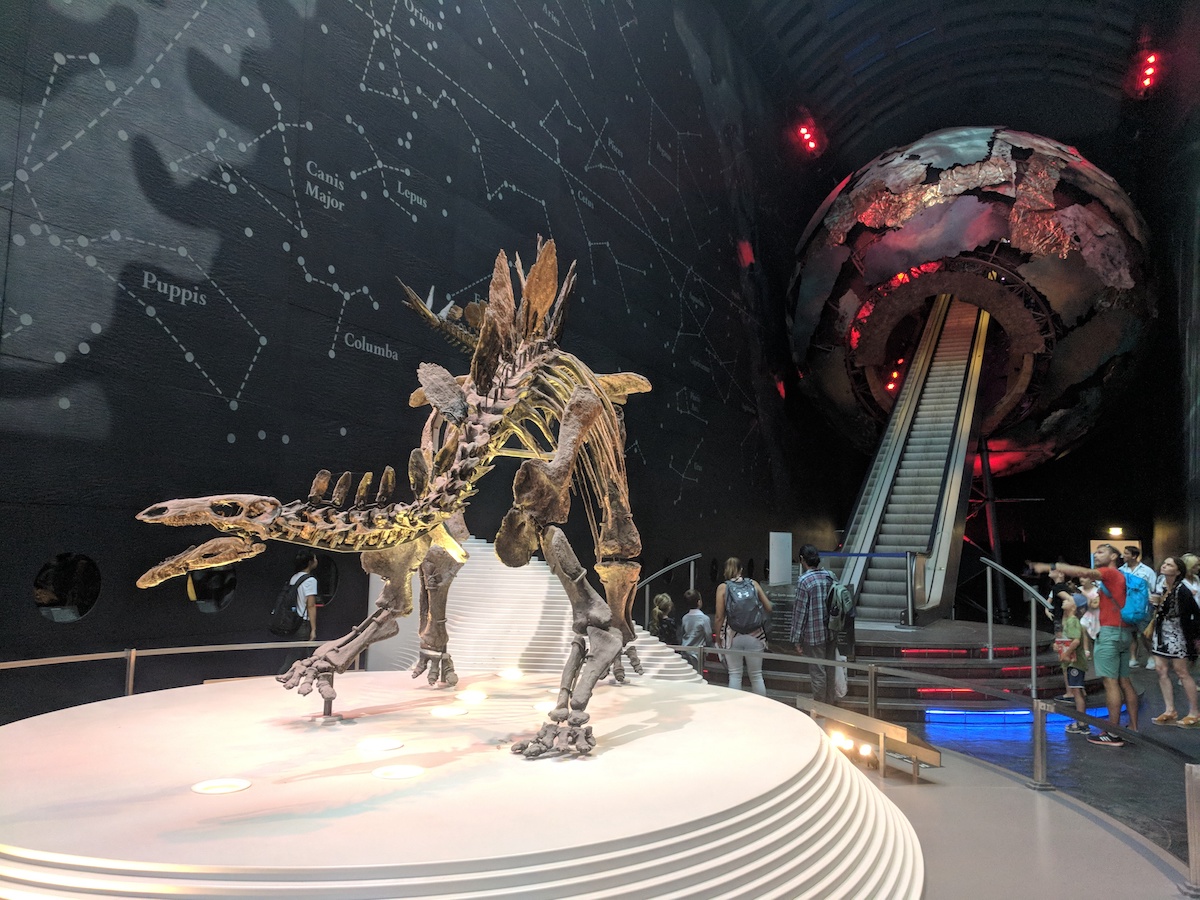 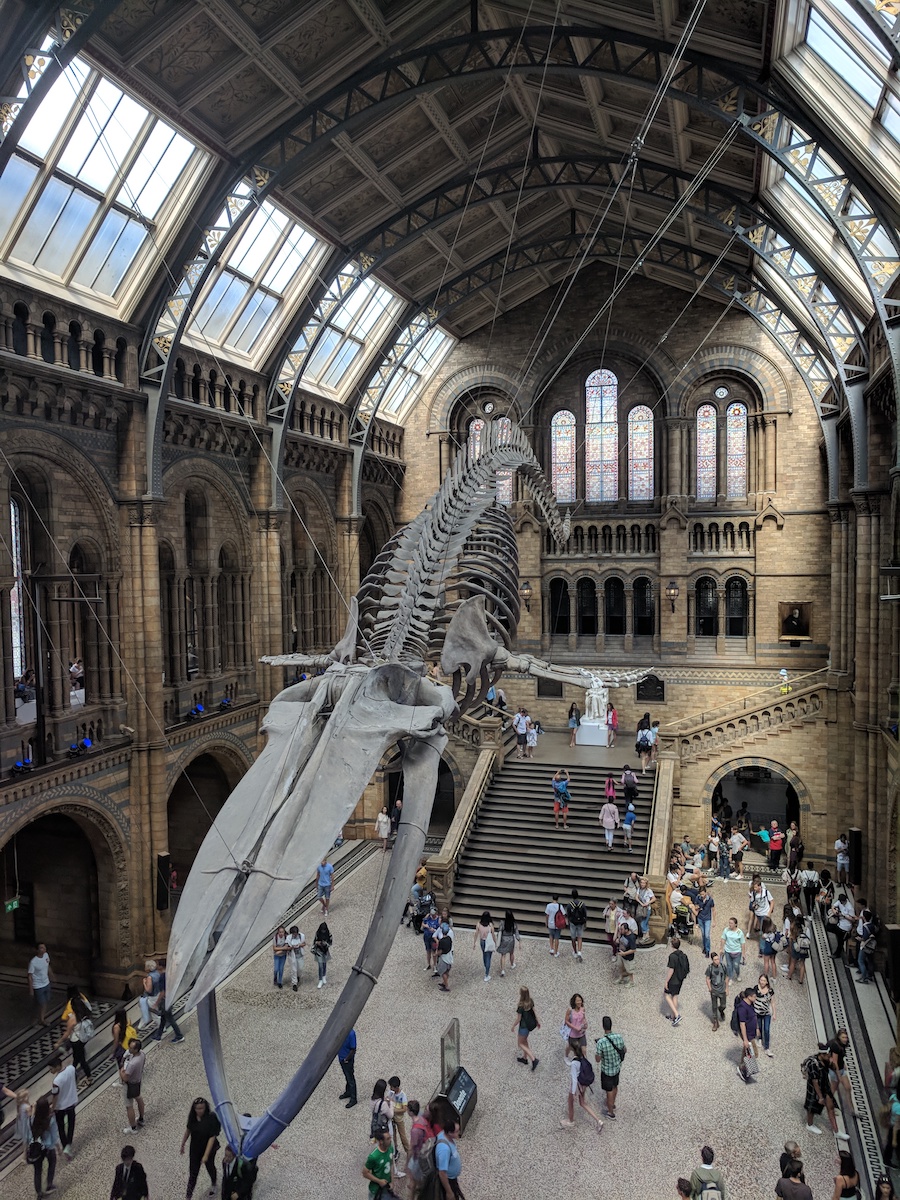 Perhaps the most surprising stop we made was at London’s Natural History Museum. A huge building, originally completed in 1880, I honestly think it beats out the Smithsonian’s Natural History Museum for the top spot in my personal rankings: it has a lot of variety, it’s really well laid out, and there was plenty interesting for us–not just children. We were planning to spend part of the morning there, and ended up spending almost the entire day there, just leaving to grab lunch. Given that the museum was created by the same paleontologist who came up with the word Dinosauria to describe never-before-seen fossils, they have a pretty amazing collection of Dinosaur bones and casts. They also have great exhibits on the Earth, from gems to volcanoes, the human body, and every type of animal out there. 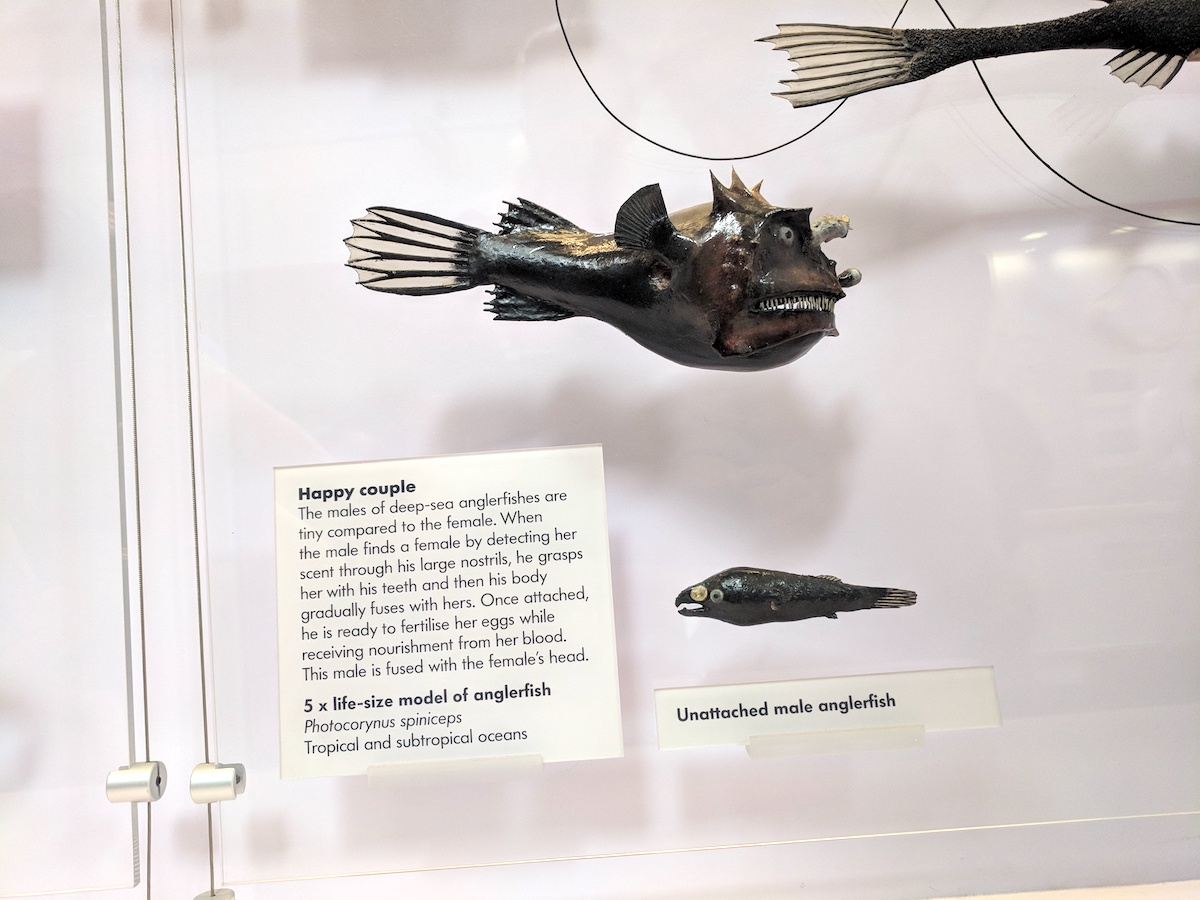 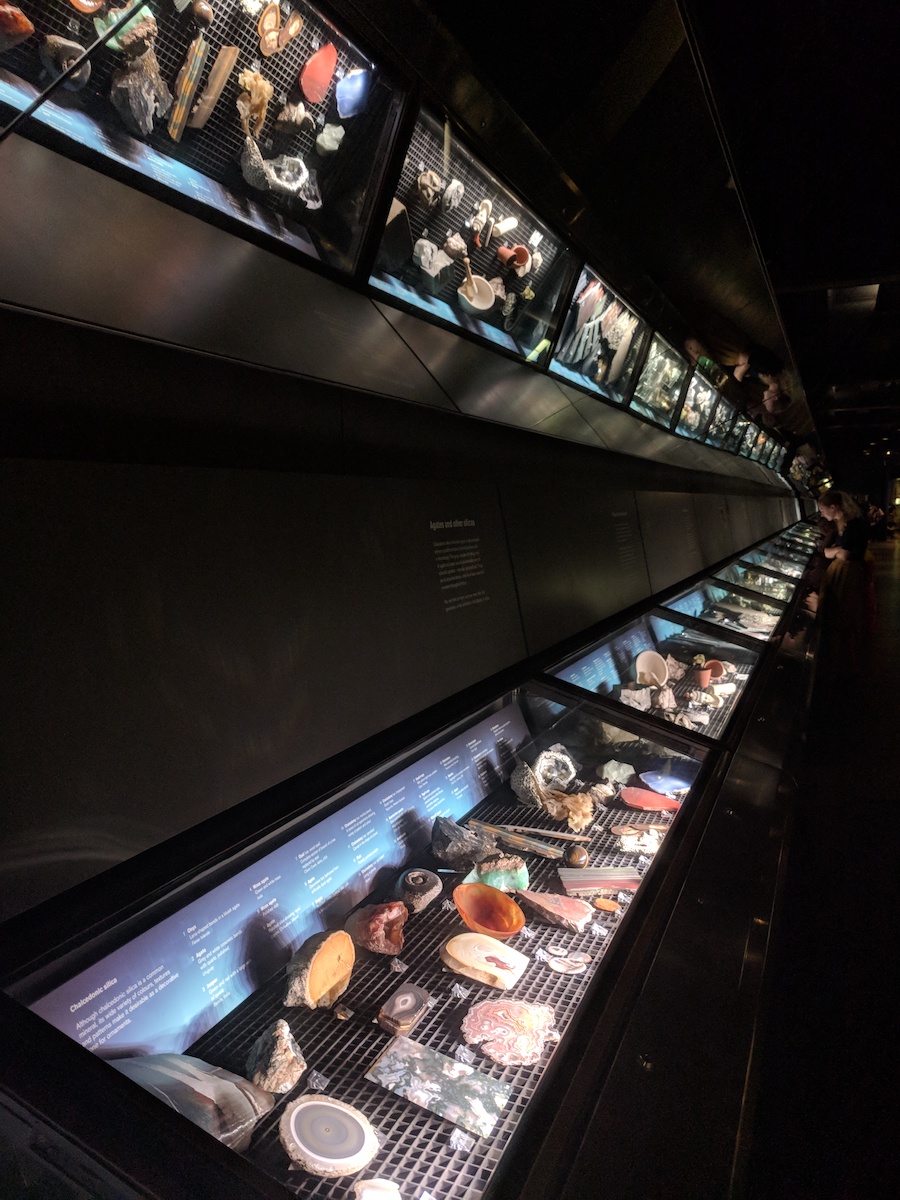 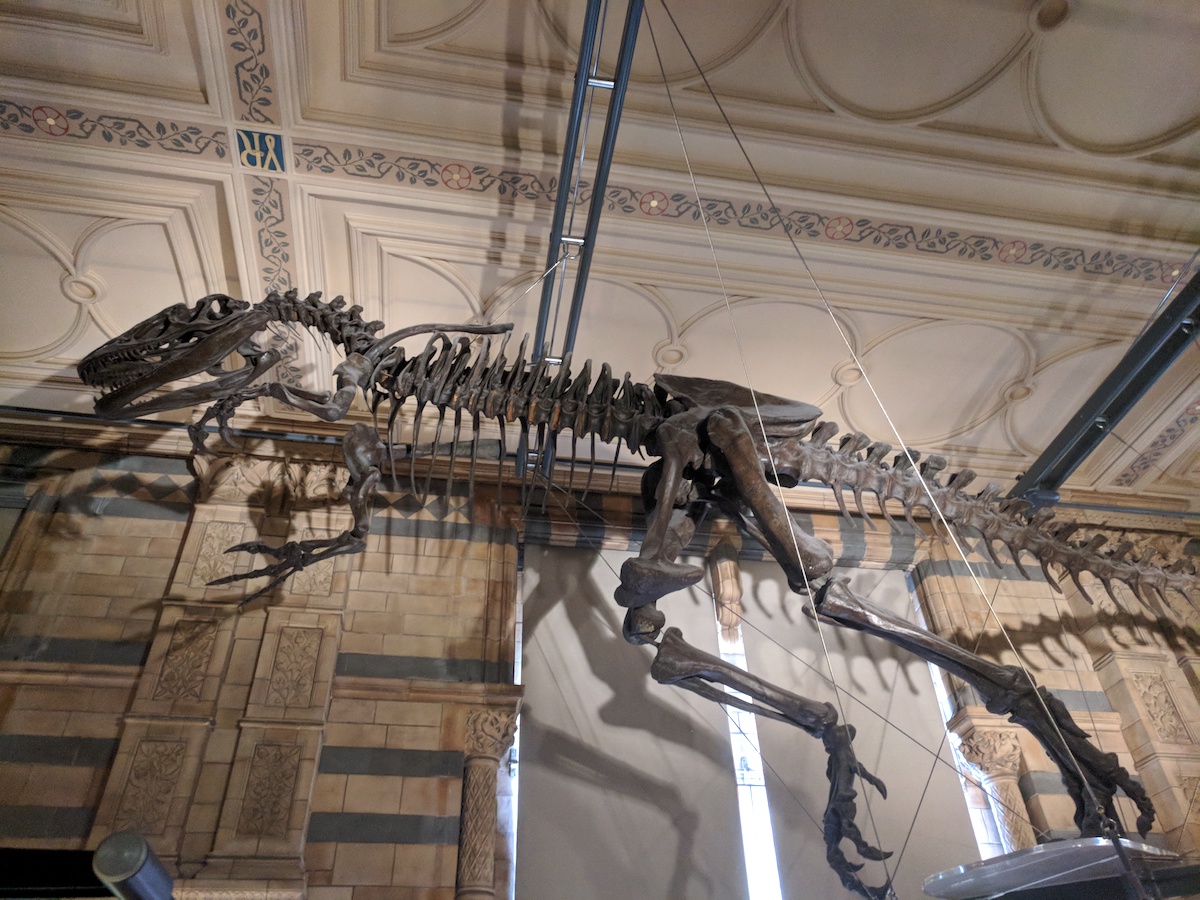 Click to enlarge the Anglerfish photo and read the infocard for some good learning!

Eating Our Way Around

While this was my first-ever visit to the U.K., I didn’t have much enthusiasm for trying all of the traditional British food some tourists go for. I did want to have a good fish and chips, which I got at The Queens Arms, a lovely pub a short walk from the Natural History Museum. 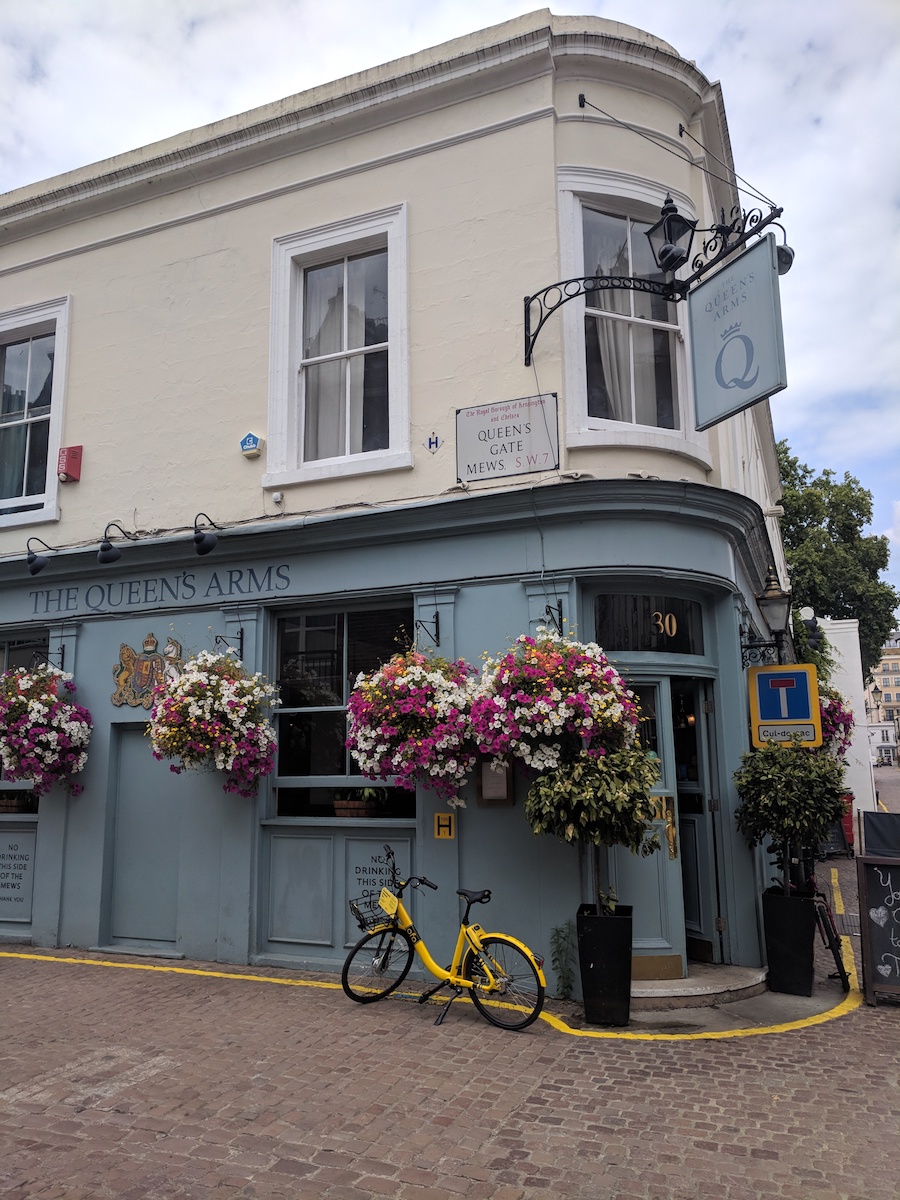 Our first night, we didn’t feel like cooking and wanted to stay in our neighborhood, so we took a recommendation from our Airbnb host and went to Sacro Cuore Pizza, which ended up being quite good. We also lucked out by sitting inside, as halfway through our meal the skys opened up and it started absolutely pouring. We ended up staying almost two hours to try to wait out the rain, which finally petered out and let everyone in the restaurant escape back home. 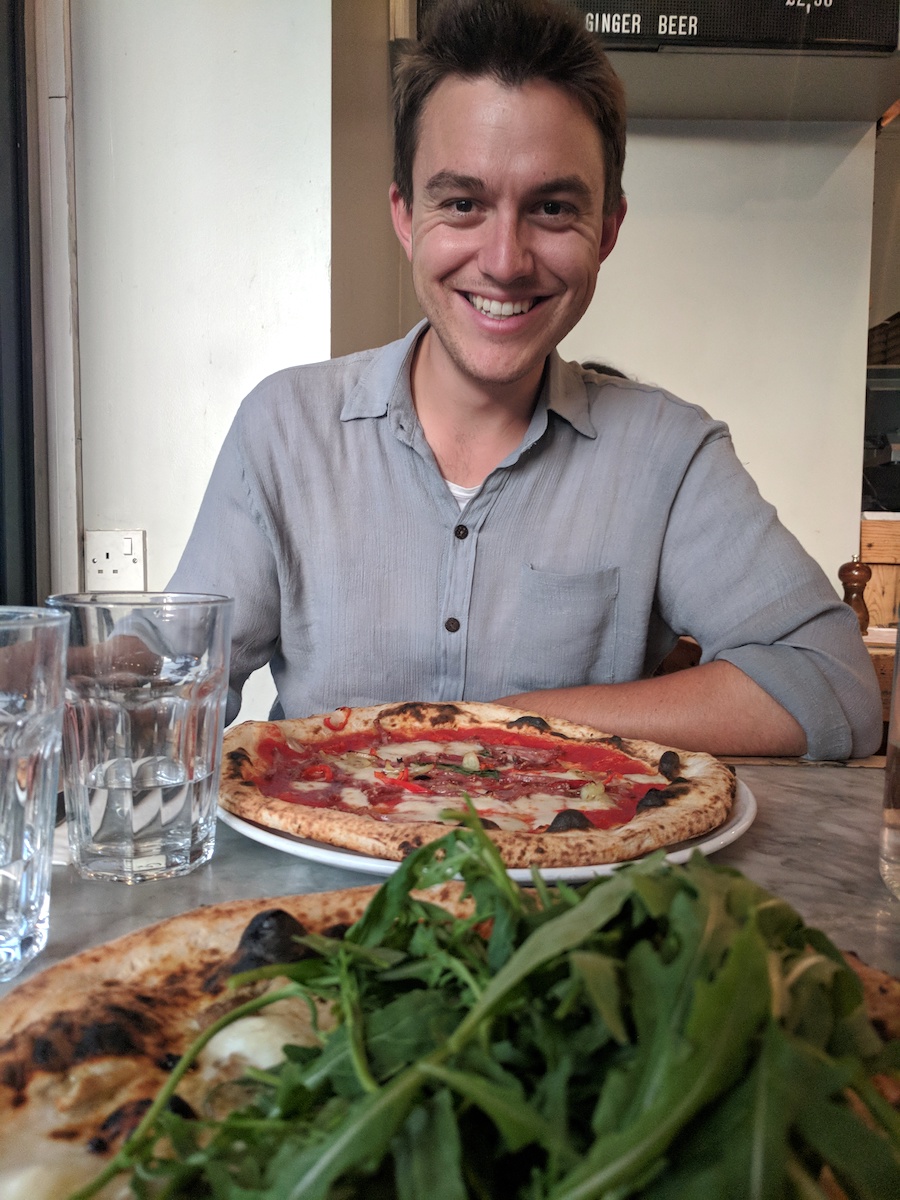 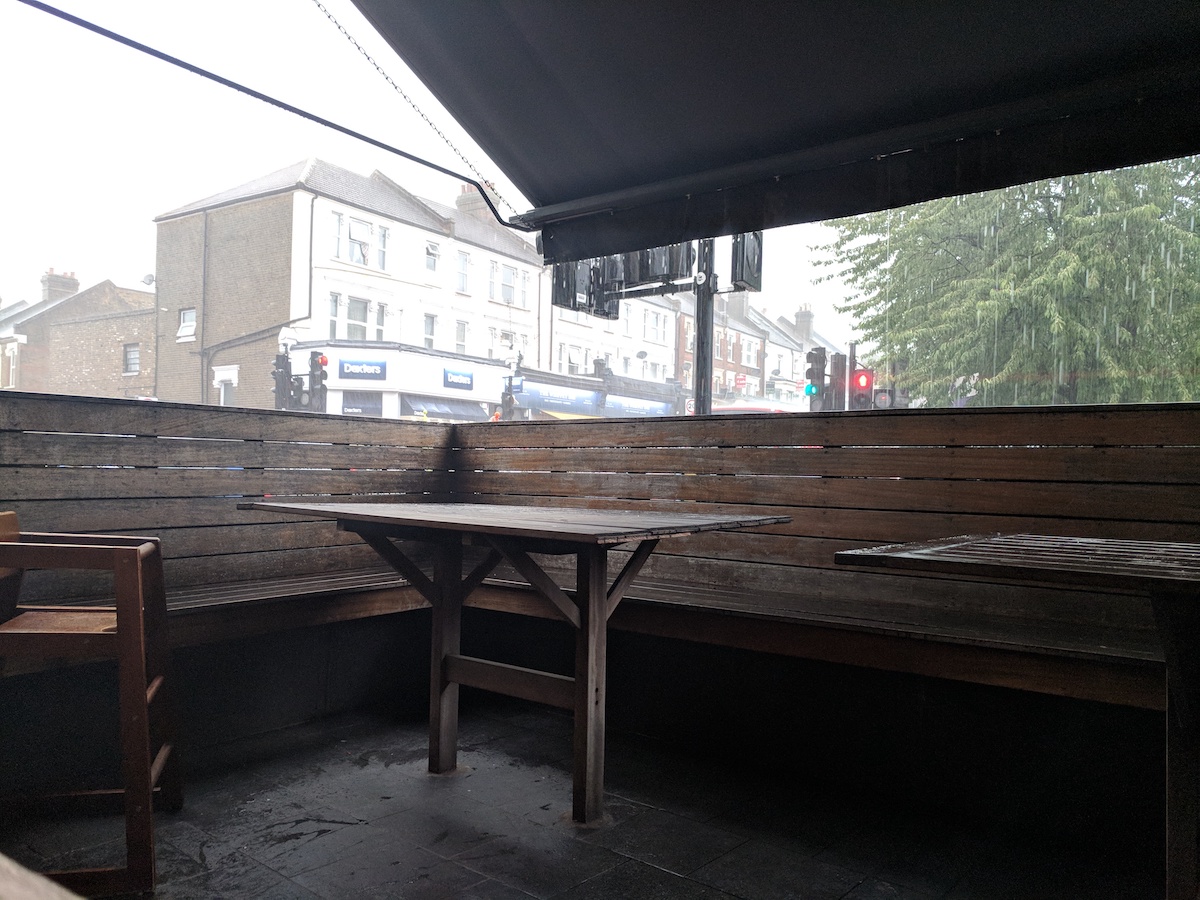 Sacro Cuore Pizza... and the rain.

Our favorite food experiences were again at markets full of different food stalls. At Borough Market, we had some empanadas to remind ourselves of Argentina and some great pastries. At Camden Market, we got falafel and halloumi wraps that were quite good. 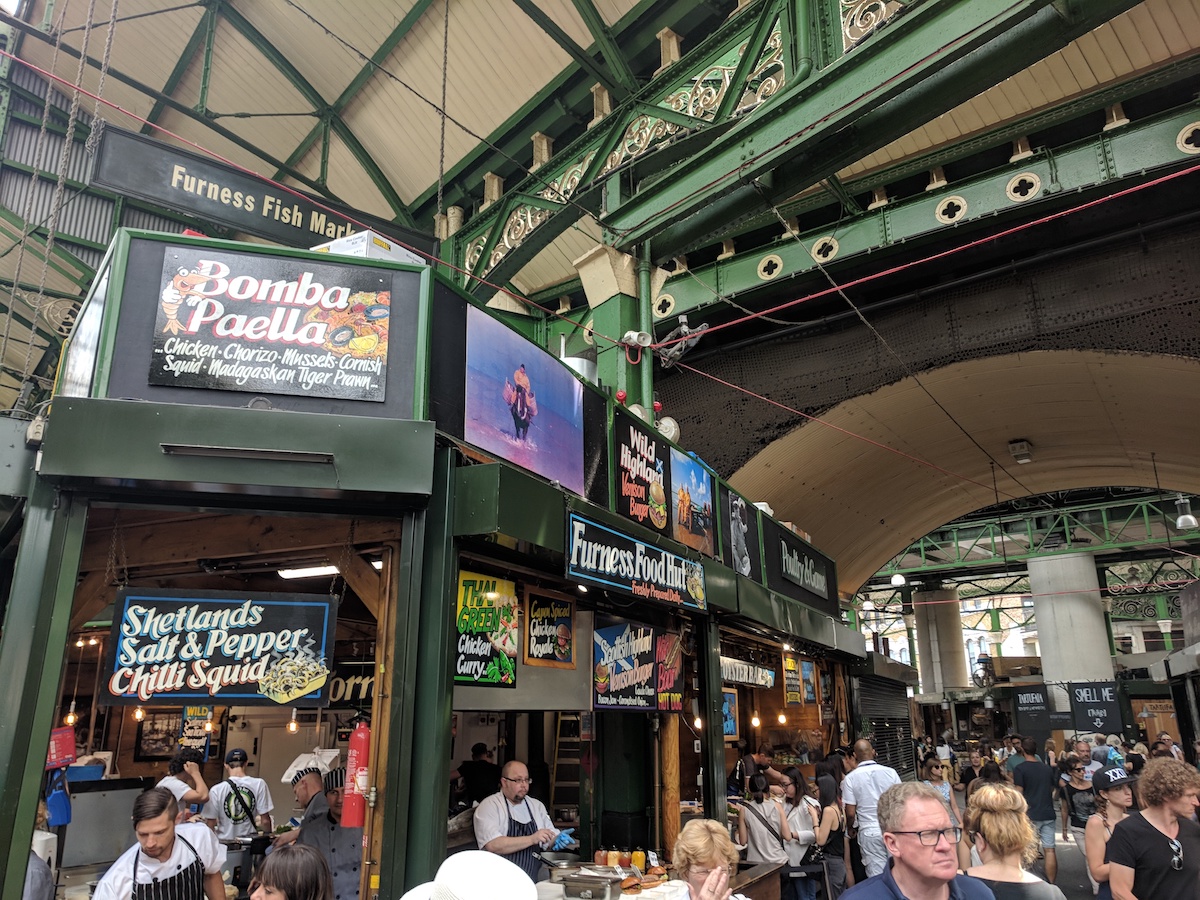 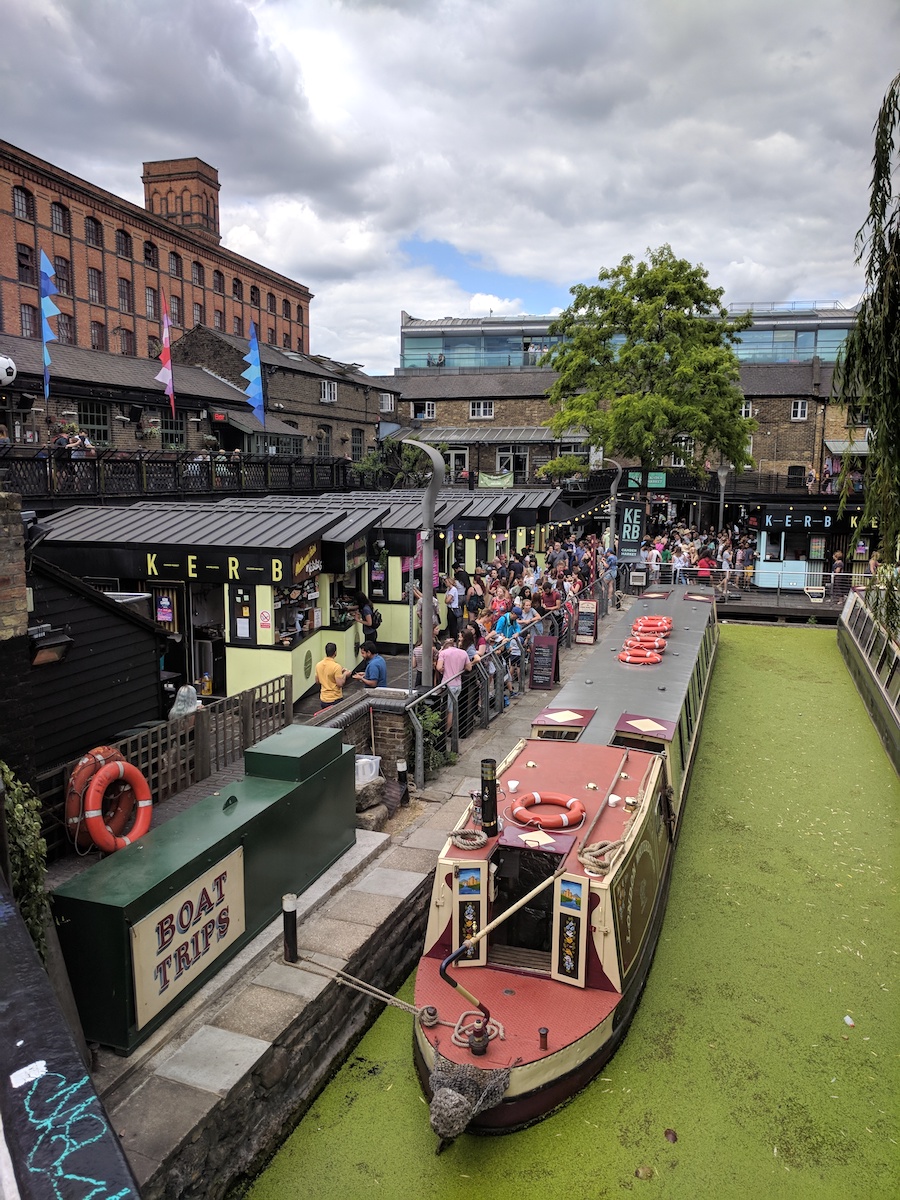 Left: Borough Market. Right: Camden Market. Both are much larger than we thought upon arriving–make sure to fully explore before picking a food stall!

After Dublin, we didn’t need to spend much time in pubs, so being outdoors all the time was quite nice! On our final night, after seeing Hamilton, I felt like I was starting to come down with a cold so we visited Viet Pho and had the best phở since we left Vietnam. Unfortunately it didn’t keep me from getting sick, but it was a nice last meal out in London. 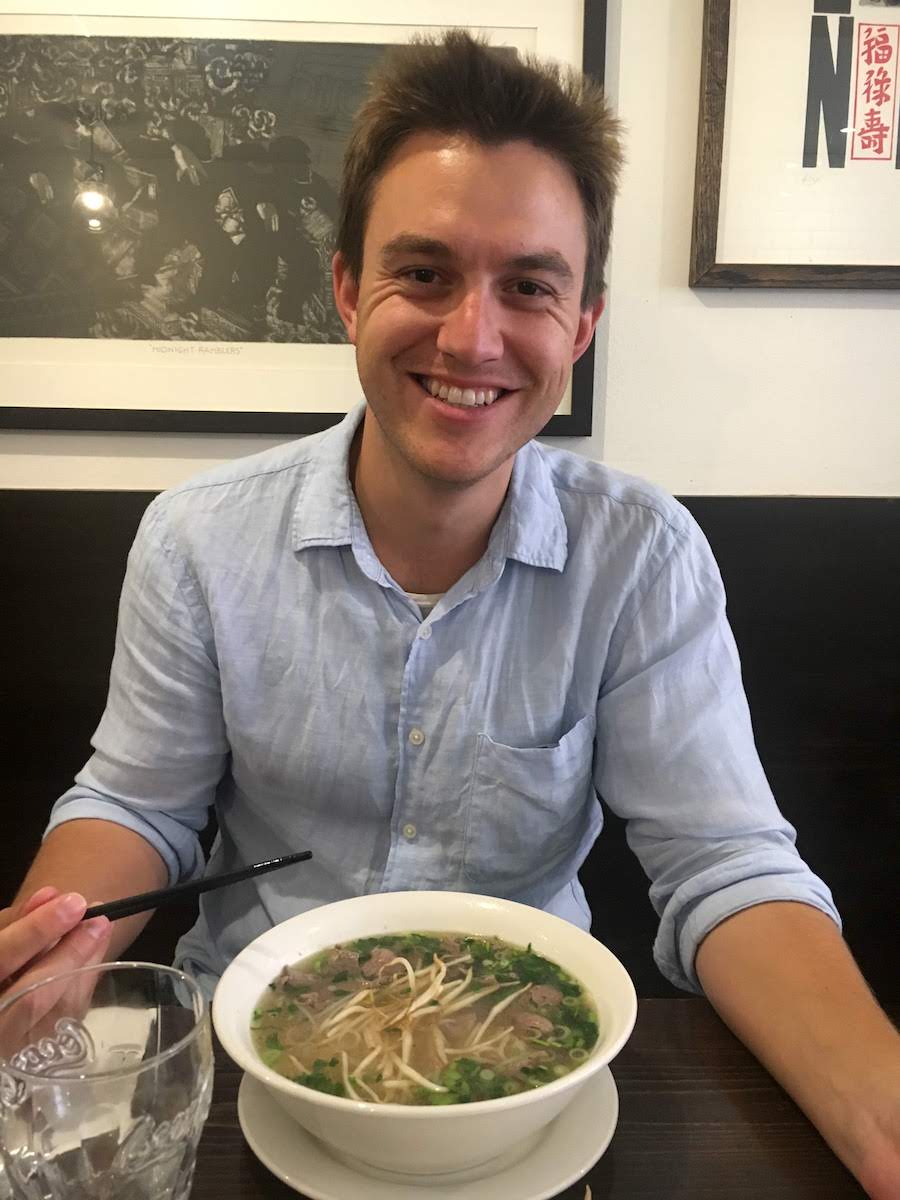 How We Did with Our Budget in London

For our time in London, we had budgeted 85 USD a night for accommodations. We had quite a bit of trouble finding anywhere suitable within that budget, but finally ended up spending 81 USD per night for our Airbnb in Kensal Rise, which was a bit of a journey to downtown London but not a bad home base. 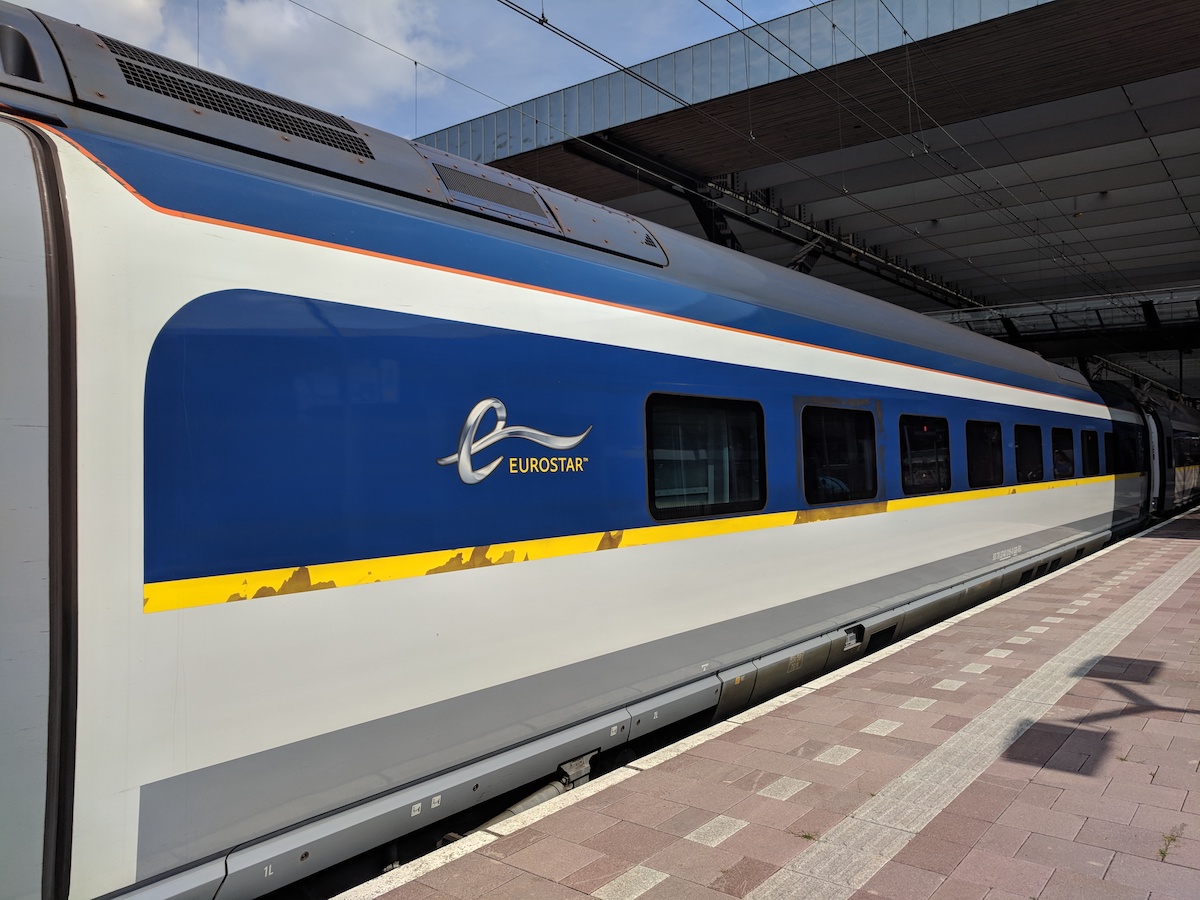 Off to Rotterdam, on Eurostar's new direct service.