Getting Home in Style

The outdoor terrace at the business class lounge in Zurich's E Terminal.

We spent four days getting home from Mauritius in style, flying in lay-flat business class seats for the first time ever and thoroughly enjoying our journey through Johannesburg, Zurich, and Chicago on the way to the Reno area for my brother’s wedding.

In contrast to our trip from Maui to Cape Town in economy, and all of our budget travel over the past year, this was the height of luxury and a really special treat for us.

Our overall longhaul flight strategy was to buy an RTW ticket taking us westward around the world from South Africa and then back to Mauritius (off the east coast of southern Africa) at the end of our trip. This was a lot cheaper than booking tickets from the United States directly, but meant we had to get ourselves to and from Africa. Luckily we had planned ahead, picked up a few credit card point bonuses, and saved up our miles to get both of us from Maui to Cape Town at the start of our trip and from Mauritius back to the US at the end of the trip.

I had researched award availability (using United miles) in the years leading up to our trip and consistently found good availability to fly one-stop from Mauritius to San Francisco on Turkish Airlines, especially when booking 10-12 months ahead of time. Unfortunately when that window came around for us, Turkish Airlines took away all of their award seat inventory for the route and we had to figure out a different plan. After checking daily for availability for flights from Mauritius to any major US city for our dates throughout September and October 2017, shortly before Halloween my search finally turned up a result: to fly in business class from Mauritius to Chicago, though Johannesburg and Zurich, for only 80,000 miles each. After a bit of debate about whether it was worth it, since that was double the miles we had planned to use on economy flights, we went ahead and booked it since we weren’t sure we’d ever have another miles option.

Looking back on that decision 10 months later, it was absolutely the correct one: I continued checking regularly and didn’t find another option to use miles on until two weeks before our departure date when last-minute options started to open up, though all would have cost even more points and had worse routing.

We actually lucked out on our timing as well, since shortly after booking the tickets South African Airways changed the timing of their flight from Mauritius to Johannesburg, requiring a 24 hour and 25-minute layover in Johannesburg before continuing and removing it as an option for other travelers to book, since airlines only count it as a single “trip” if the layover is less than 24 hours (since we already had the ticket, we got to keep it and just stay overnight in Johannesburg).

One of the perks of our business class tickets, even though we obtained them using airlines miles, was access to airport lounges in Mauritius, Johannesburg, and Zurich before each of our flights. This was especially handy as due to our schedule we ended up spending around 3 hours in each of them–3 hours that would have been a real drag to spend in the terminal’s general area but was actually a delight to spend eating and drinking free refreshments in a relaxing lounge area. 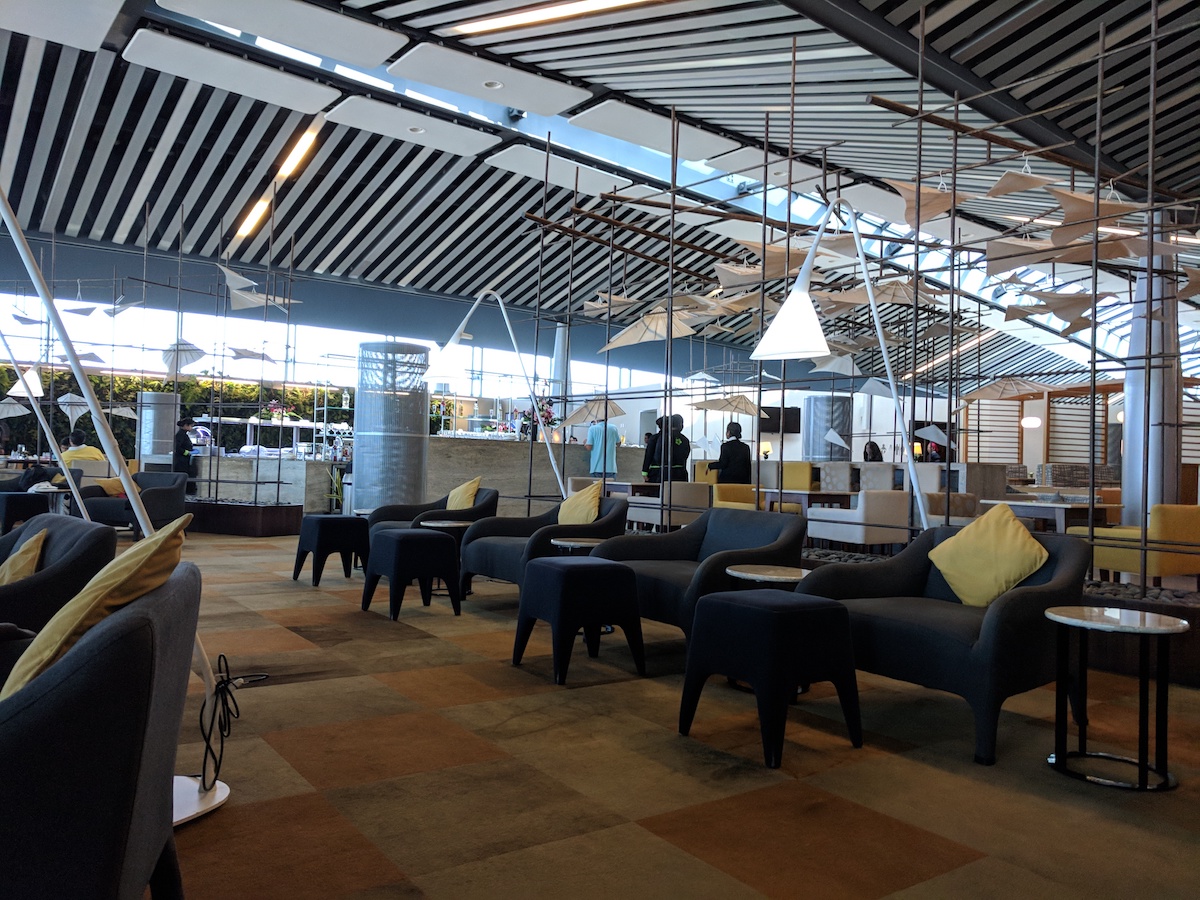 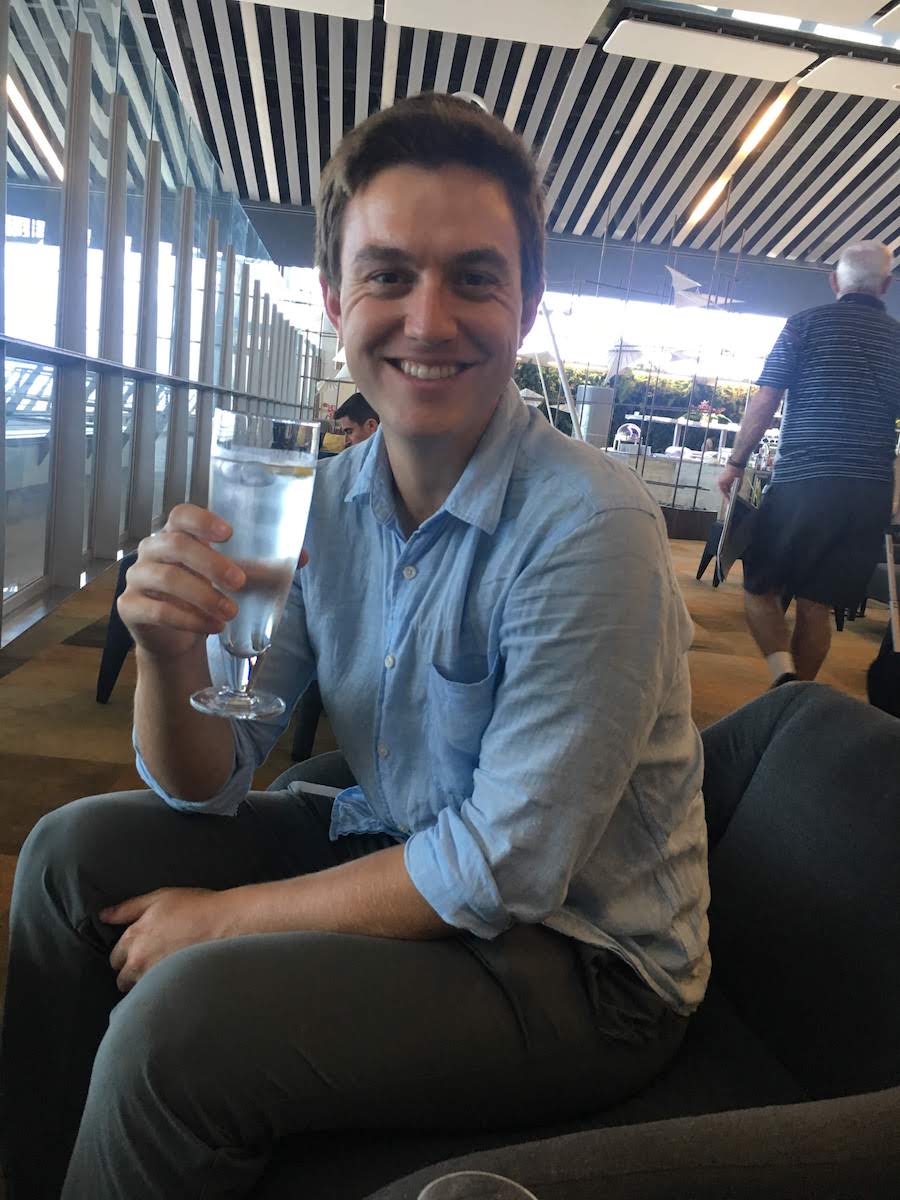 In Mauritius we had access to the Amédée Maingard Lounge run by Air Mauritius, which takes up two floors at one end of the terminal, with the top floor overlooking some departure gates and part of the tarmac. Since we had to return our rental car a full 3.5 hours before our flight was scheduled to depart we spent a solid 3 hours in the lounge and had a great time. Their food was mainly Indian curries and small snacks that were great, if a bit surprising for the island, and their full bar let us properly start celebrating making it to the end of our trip in one piece.

In Johannesburg, we had a surprise and were given access to the Aspire Lounge by the agent at the SWISS check-in desk, even though their website lists a different (worse) lounge as the one they use at the airport. We were happy with our luck and again enjoyed some nice curries and a drink during a long wait before our evening departure. When we arrived around 3:30pm we were one of the only couples in the place but by the time we headed to our gate at around 6:30pm it was very full. 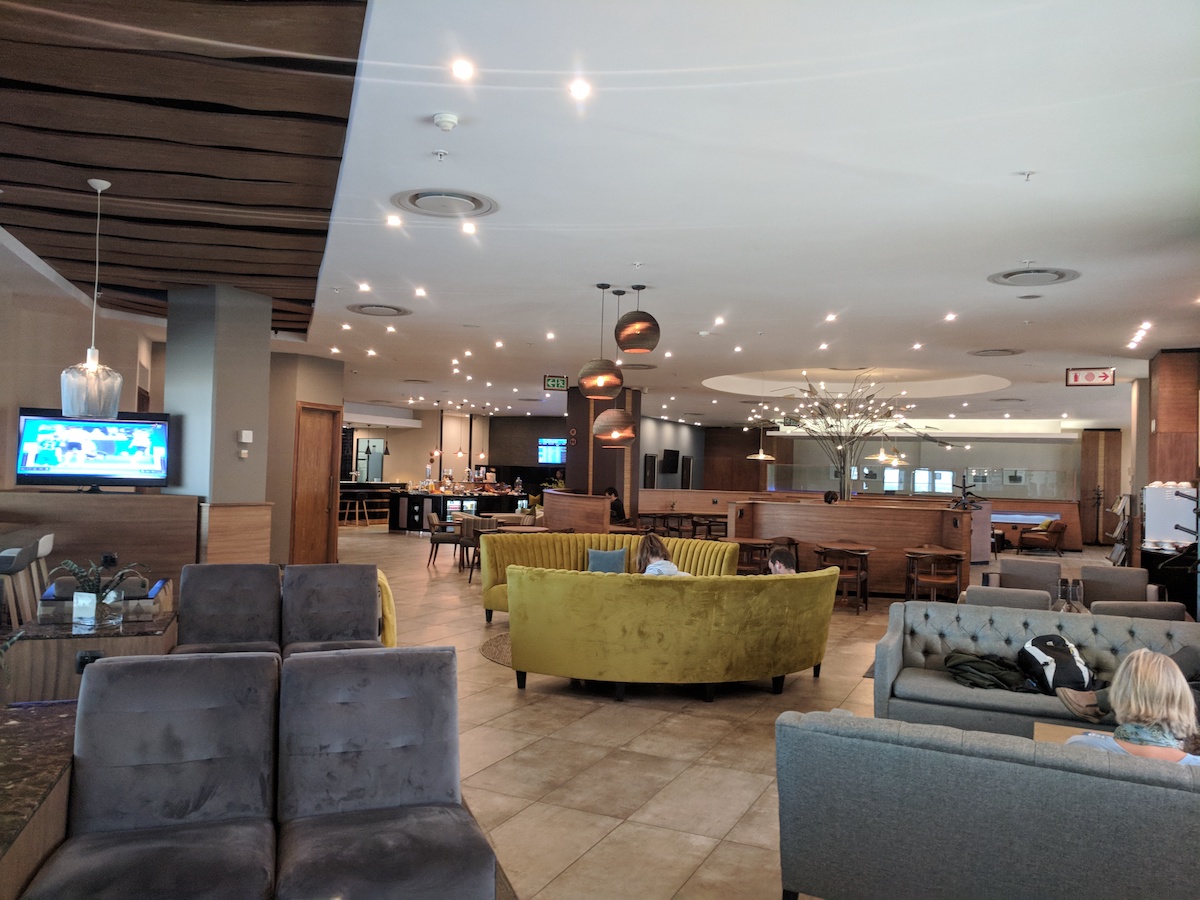 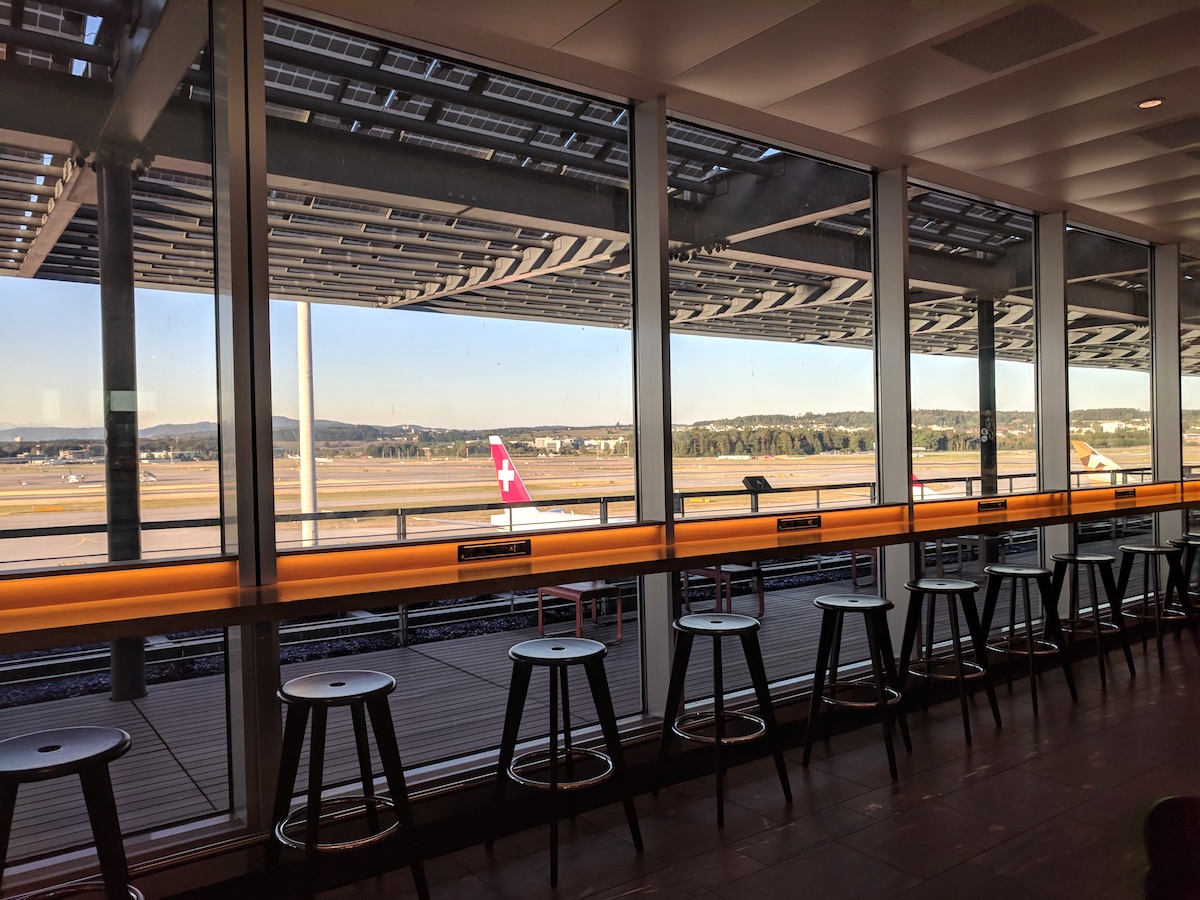 In Zurich, we had access to the Swiss E Terminal Business Lounge which only opened recently and is a very nice, large space with an outdoor terrace overlooking the busy runways. The biggest perk, though, was their showers which were free for us to use. We took advantage as soon as we got there and immediately felt very refreshed, which is a huge help when getting through back-to-back 10-hour flights. I had read a couple of blog posts about this lounge before arriving and was a bit disappointed in their food spread as they seem to have reduced their offerings, but compared to not having lounge access it was still really wonderful for our 3.5 hour layover.

Ultimately the lounges may have been the most valuable part of the experience for me, as it saved us a bunch of money on airport snacks, let us truly relax before each of our flights, and made the whole experience feel top-notch.

Our first flight, from Mauritius to Johannesburg, was on a South African Airways A330-300, the newest plane in their fleet. We really lucked out when they swapped this aircraft onto our route, as when we booked they had a much-smaller A320 scheduled for the flight. This change meant that instead of comfortable lounge chairs 2-2 across a single aisle we had expansive lay-flat seats arranged 1-2-1 across two aisles. We ended up having to sit apart, both at window seats, but it was by far the nicest seat I’ve ever sat on in a plane. At only 4 hours of flying time we wished we could have taken this one further! 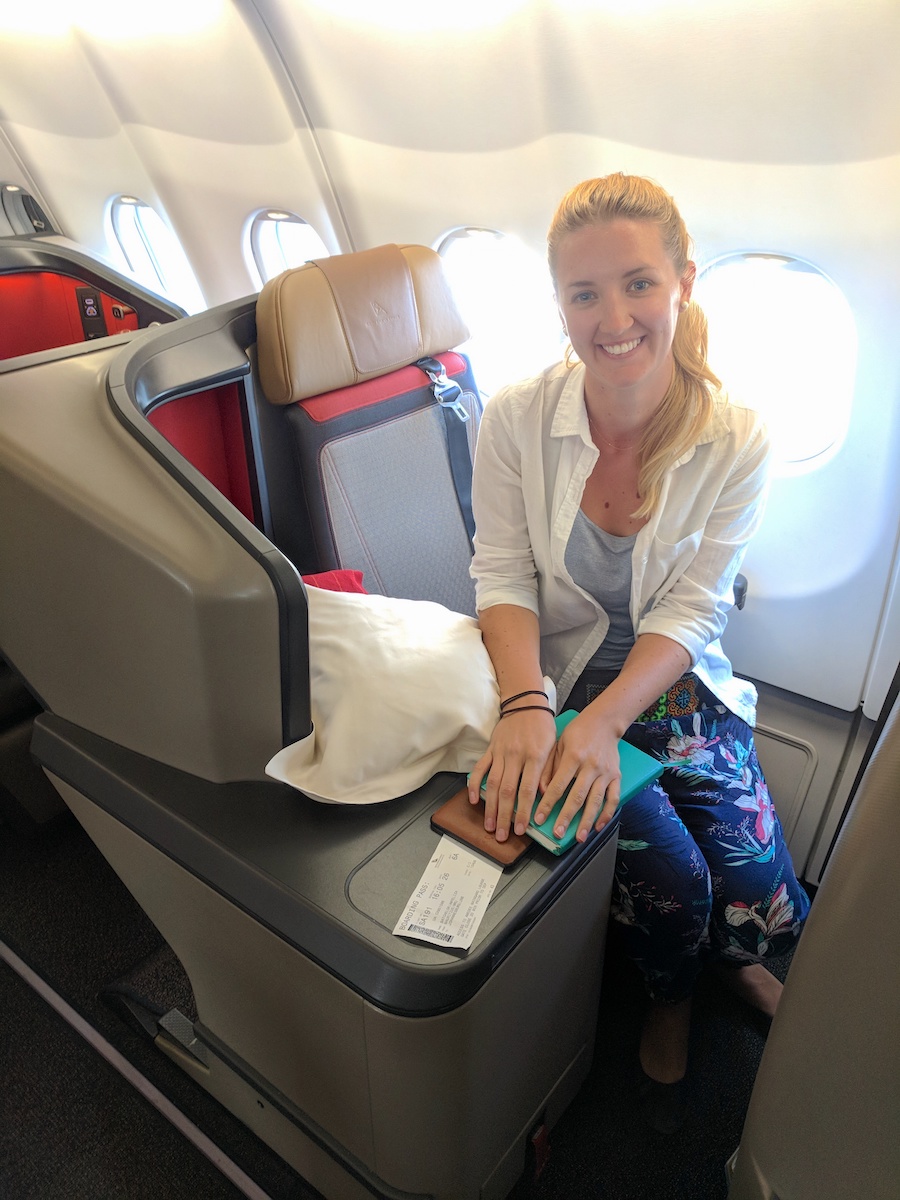 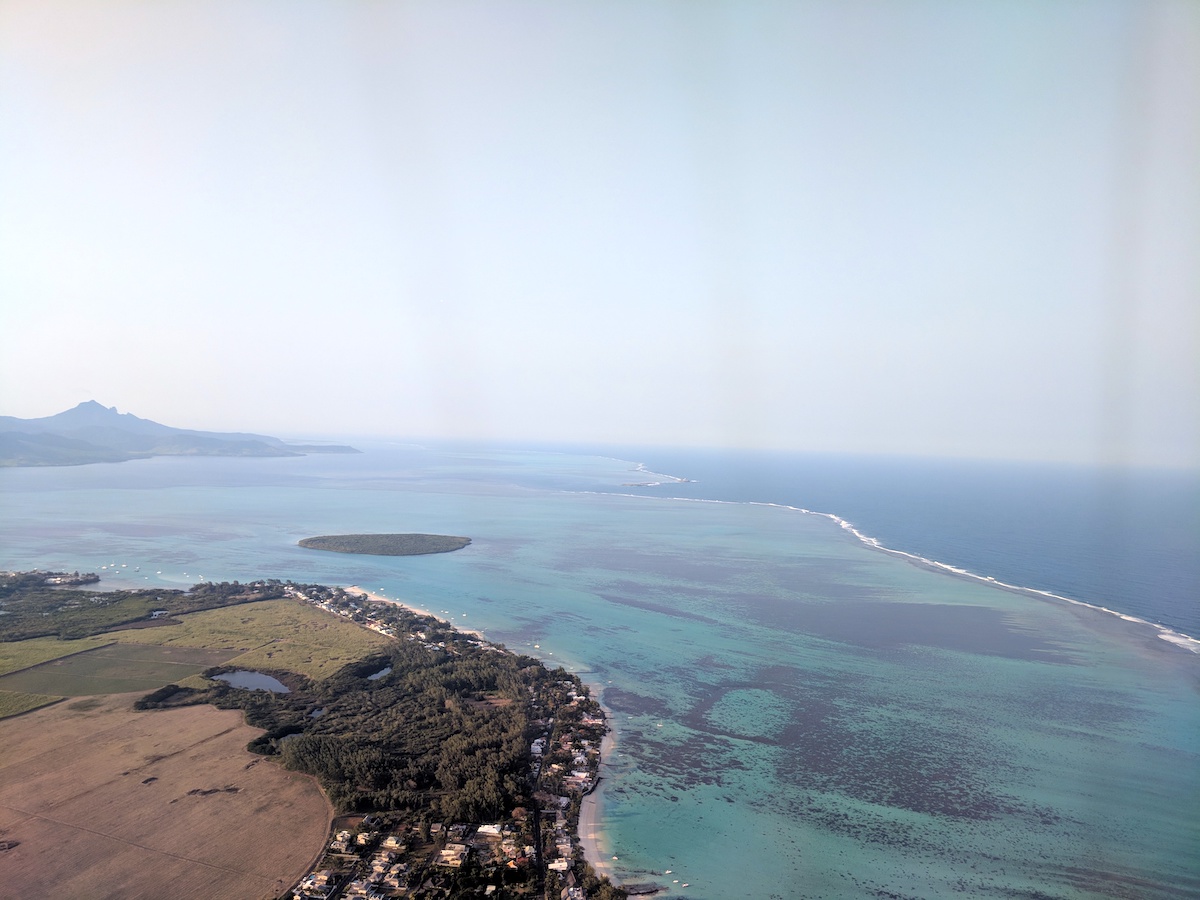 We traveled aboard SWISS for our flights from Johannesburg to Zurich and then onward to Chicago, each of which was 9-10 hours long. We flew first on an A340-300 and then on another A330-300, though SWISS has configured their insides to be almost identical (and inferior to the SAA arrangement we experienced). We sat in the same seats on both flights, 5A and 5B, which is the only pair of seats adjacent to a window in the small 2-row business class “mini-cabin” right behind first class, which we preferred over the bigger, louder main business class cabin. Compared to economy travel the seats were amazing, and sleeping horizontally while flying is really a game changer compared to trying to sleep while only leaning back slightly. Unfortunately we didn’t have a perfect experience, as my seat was slightly broken on our first flight, not quite getting to 100% horizontal, and Amy’s tray table malfunctioned on our second flight. I guess even in the fancy seats planes can still feel old! 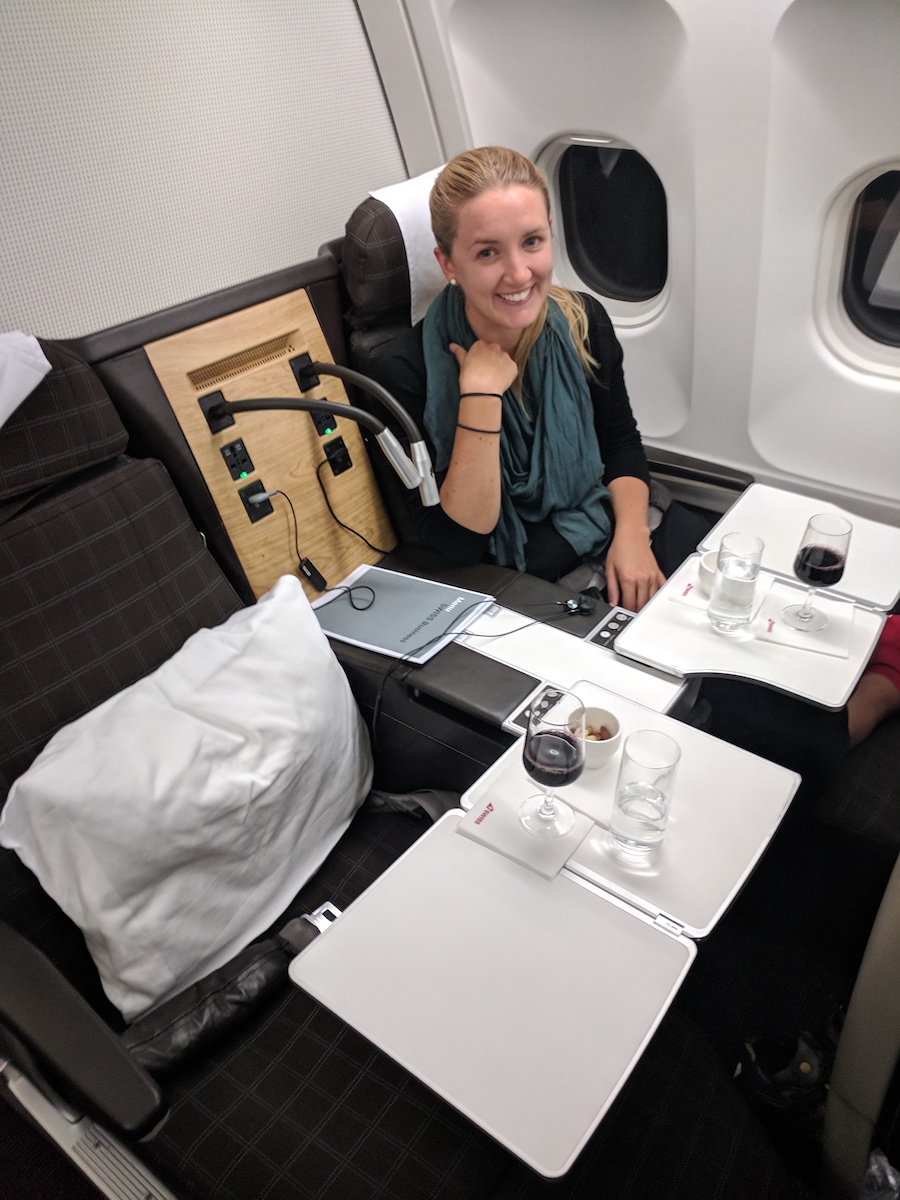 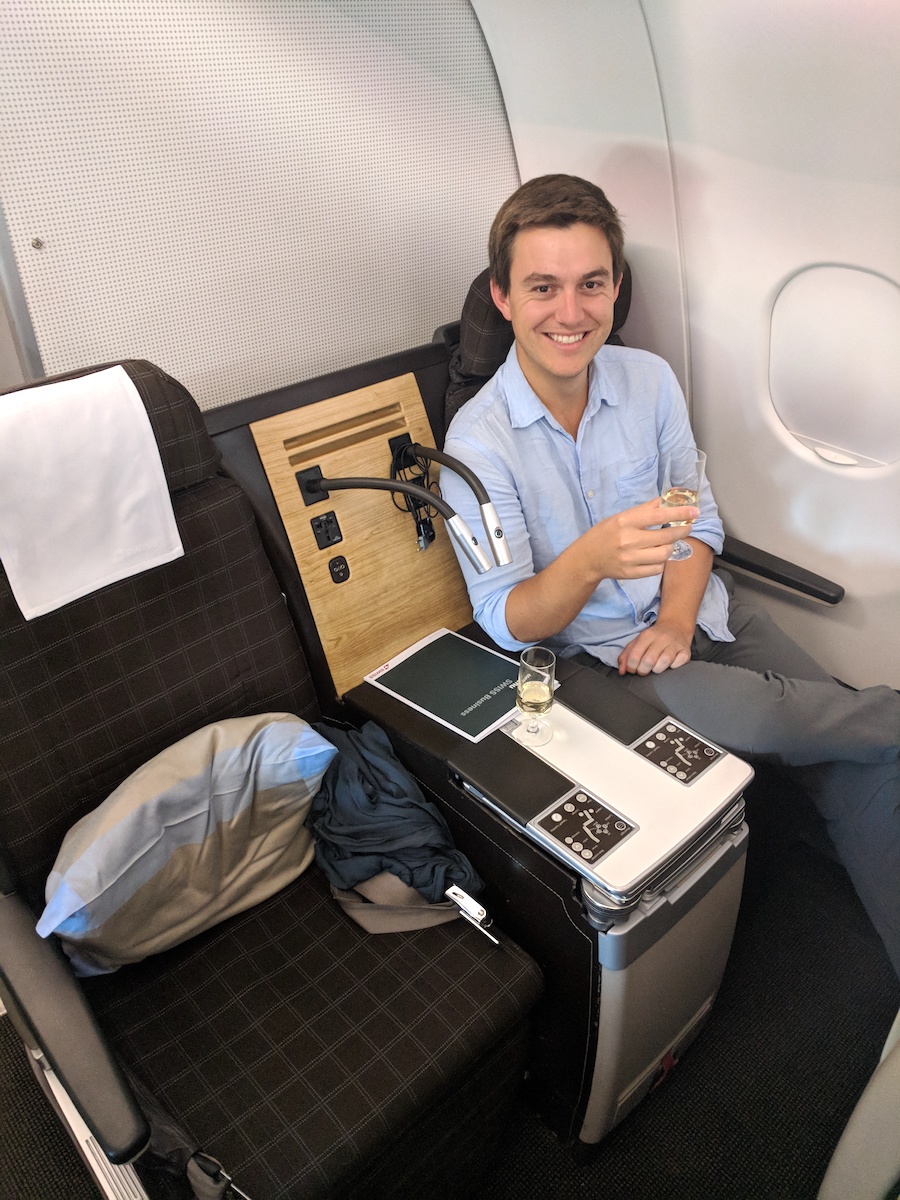 On board our two SWISS flights home from Johannesburg.

When we landed in Chicago we were the first two people off the plane, since we disembarked through the door right behind our seats, used our Global Entry status to breeze through immigration almost without stopping, and were on the Blue Line toward downtown Chicago less than 30 minutes after touching down–made us feel pretty fancy!

The food on our trip home was what stood out to me the most: the sheer quantity of it was stunning, and most of it was pretty good.

Each lounge had a full spread of food we could help ourselves to, along with desserts and drinks if we so desired. While we normally snacked a bit in each lounge we didn’t want to fill up too much since we’d soon be boarding the flying cafeteria that is a business class flight.

One of the regular perks of flying business class is that immediately upon boarding, while the rest of the plane is filling up, you are served some champagne to enjoy as you settle in. I found it a bit silly, but it was a nice way to officially toast the end of our trip!

On the 4-hour flight to Johannesburg we enjoyed:

Along with all the drinks we wanted. 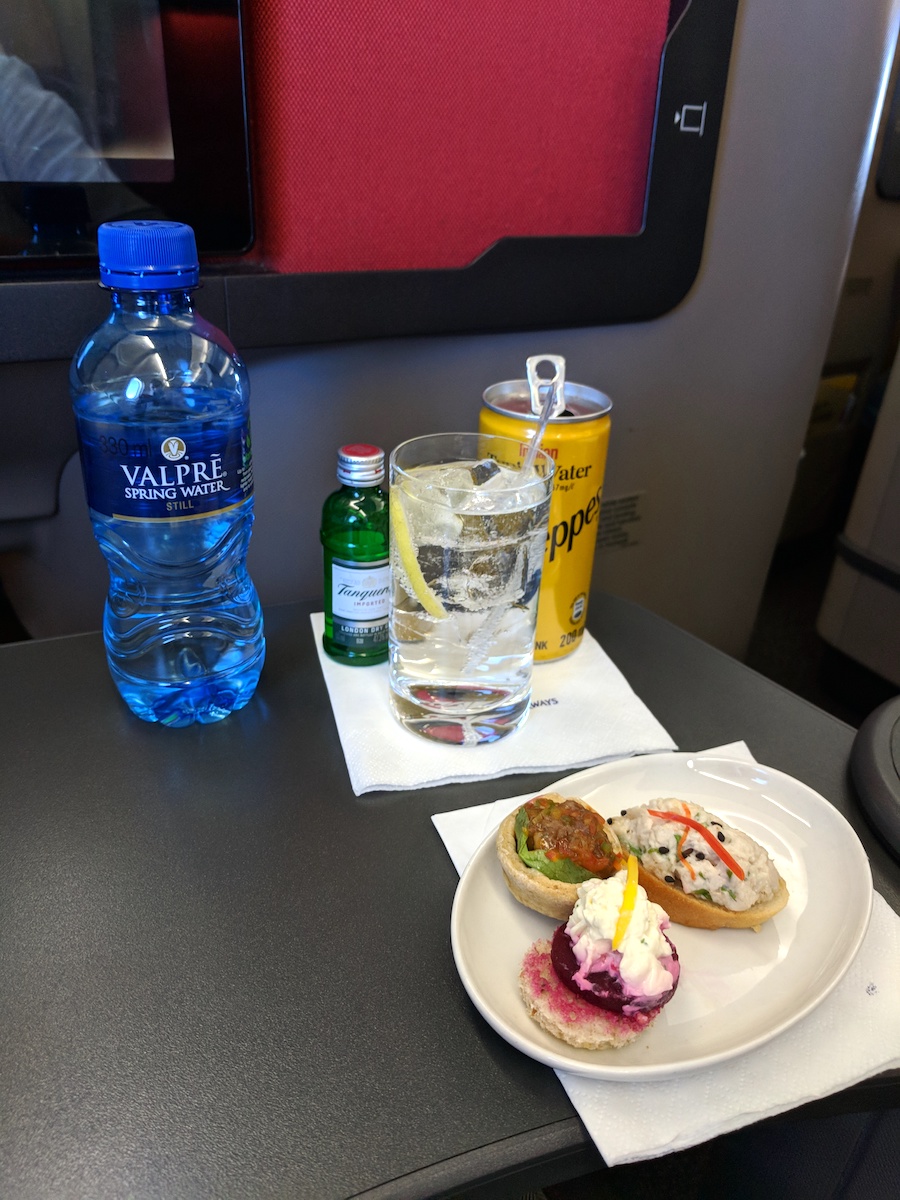 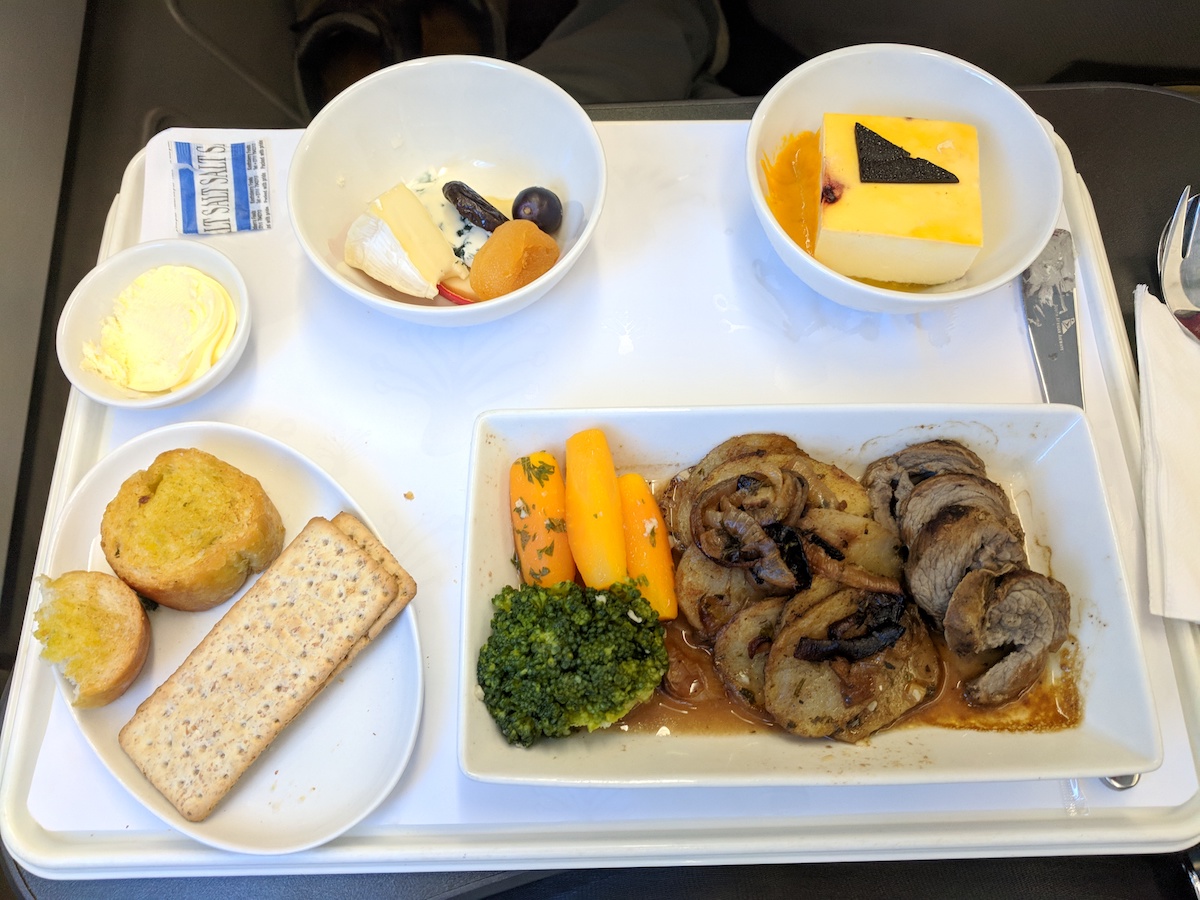 On board our flight from Mauritius to Johannesburg.

On the 10-hour flight to Zurich we enjoyed: 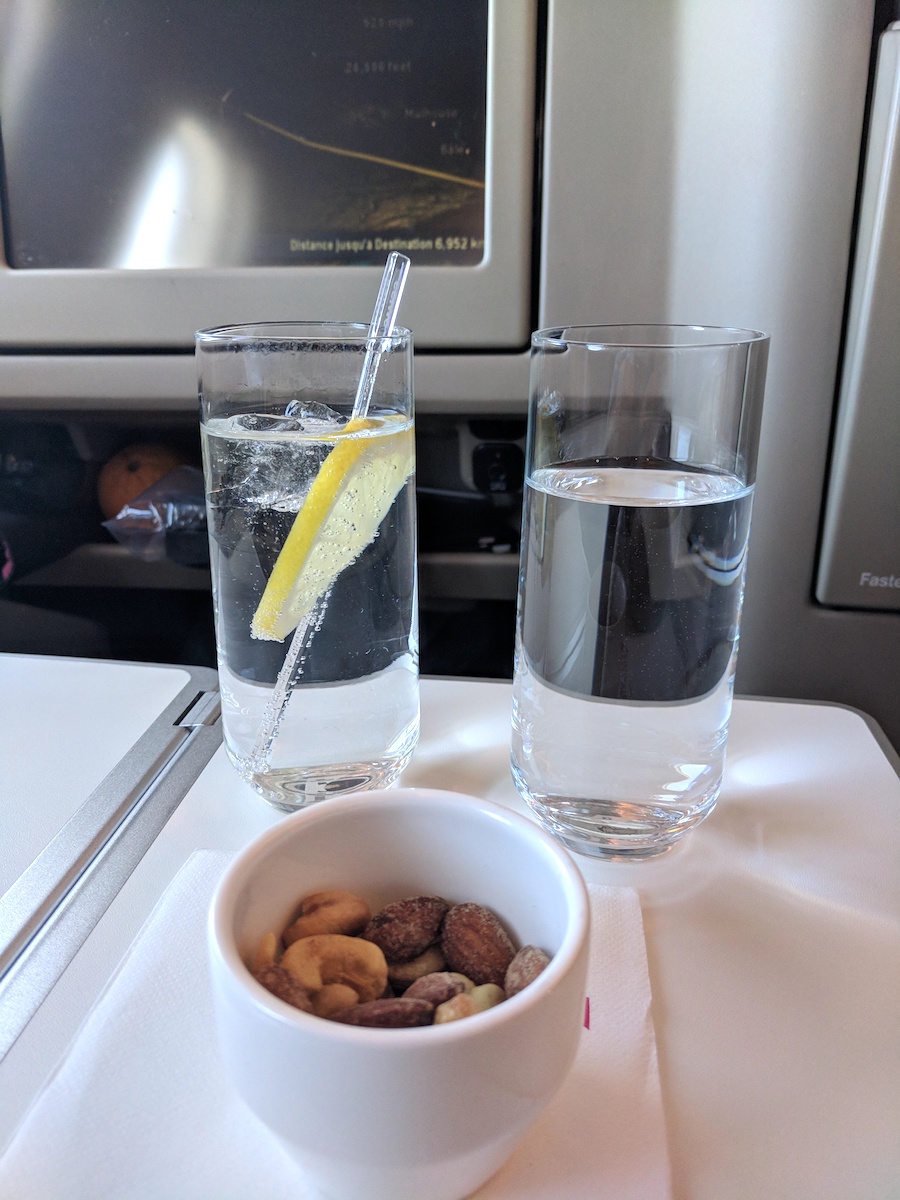 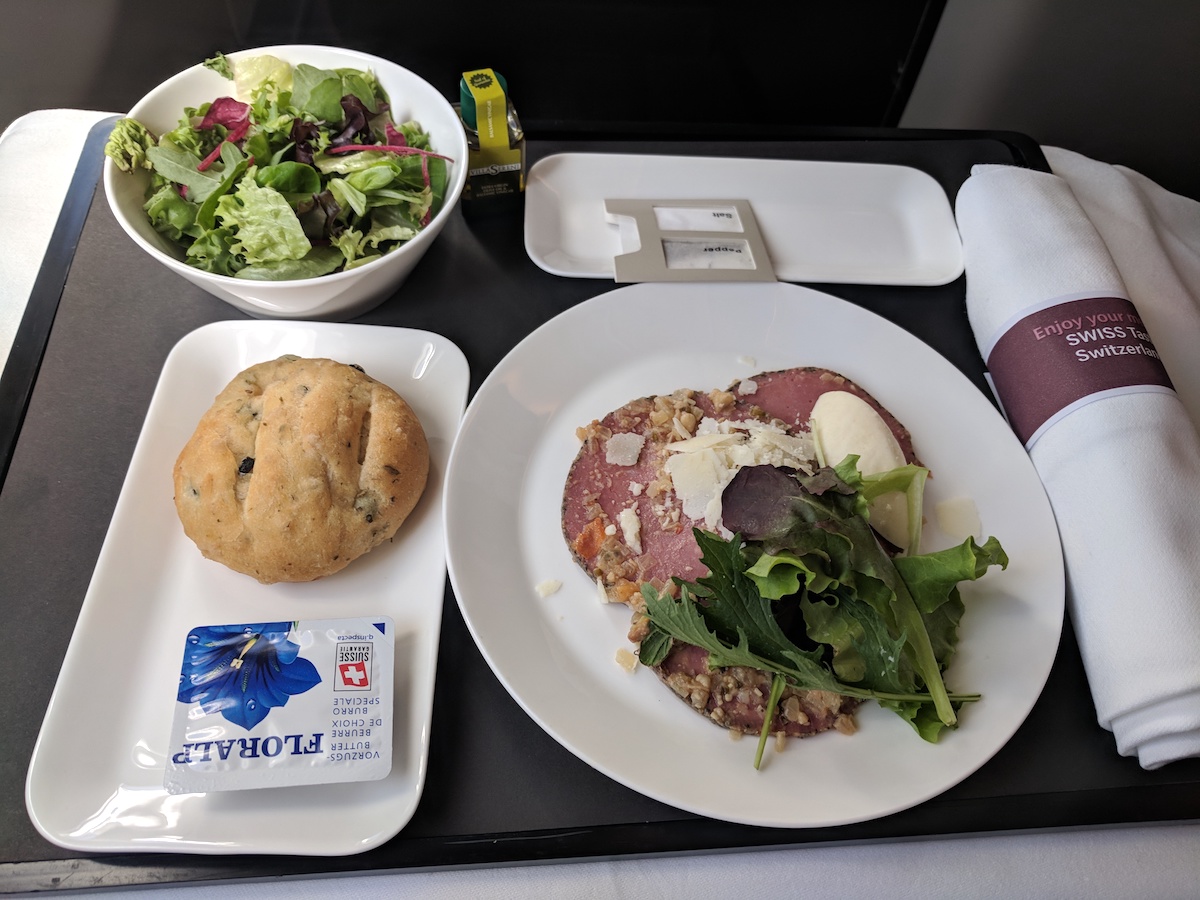 Some of our SWISS fare.

On the 9-hour flight to Chicago we enjoyed:

Suffice it to say we were absolutely stuffed for most of our trip, though I couldn’t quite bring myself to turn down any of the courses when it was such a special occasion.

Stopovers Along the Way

Our trip home took three overnights: one at a hotel near the airport in Johannesburg, one on the flight from Johannesburg to Zurich, and one in downtown Chicago. 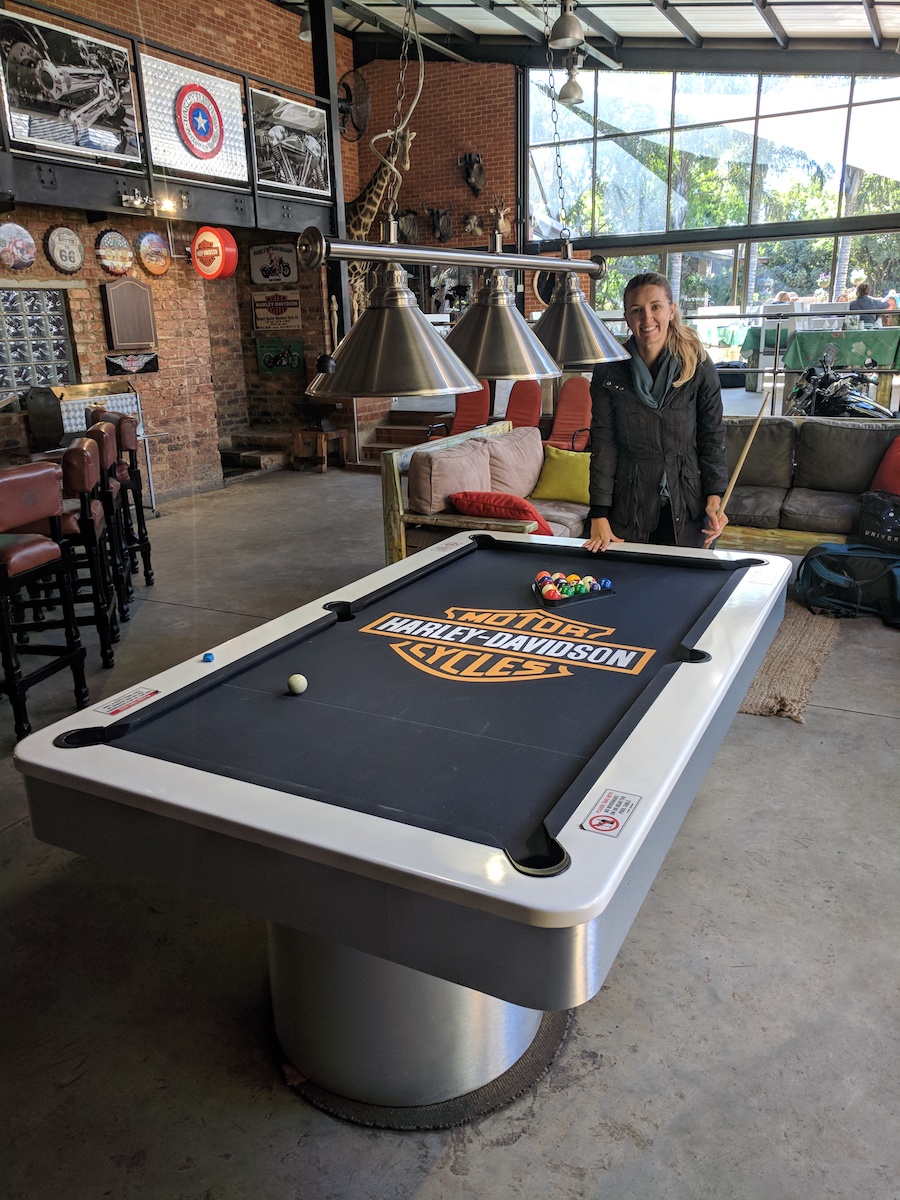 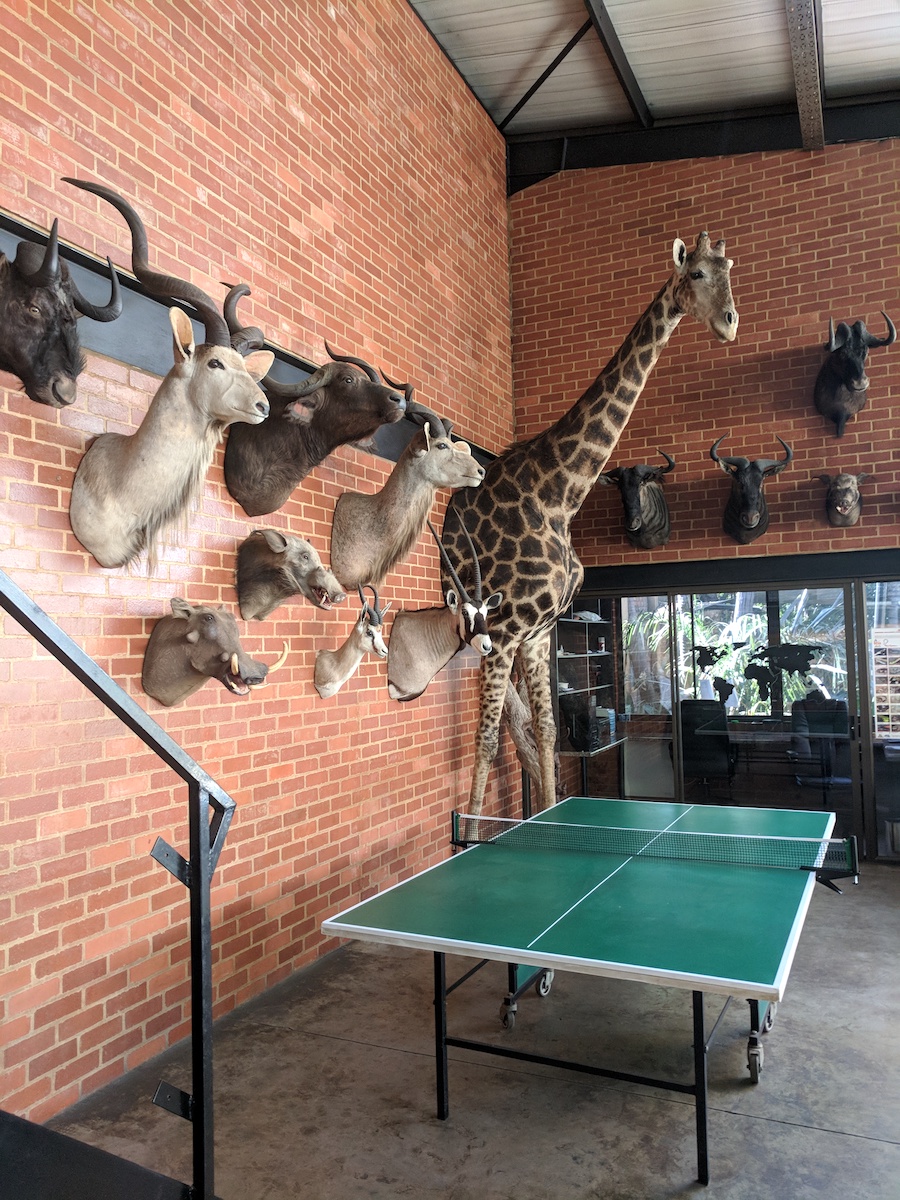 In Johannesburg, we stayed at the Sunrock Guesthouse, which is out near the airport and offers free airport pick-up/drop-off and free breakfast and had great reviews. We ended up a bit unlucky as one of the draws of their property is their outdoor pool, but our winter day there was an unseasonably cool 45 degrees, which made us freeze both inside and outside our room. We had a nice sleep, ate some breakfast, and then needed to kill 6-7 hours before heading to the airport since our onward flight didn’t leave until the evening. We got a late checkout, played some pool in their common room, and I got my 7th and final massage of the trip at a great price before we got back in their van to head to our flight. 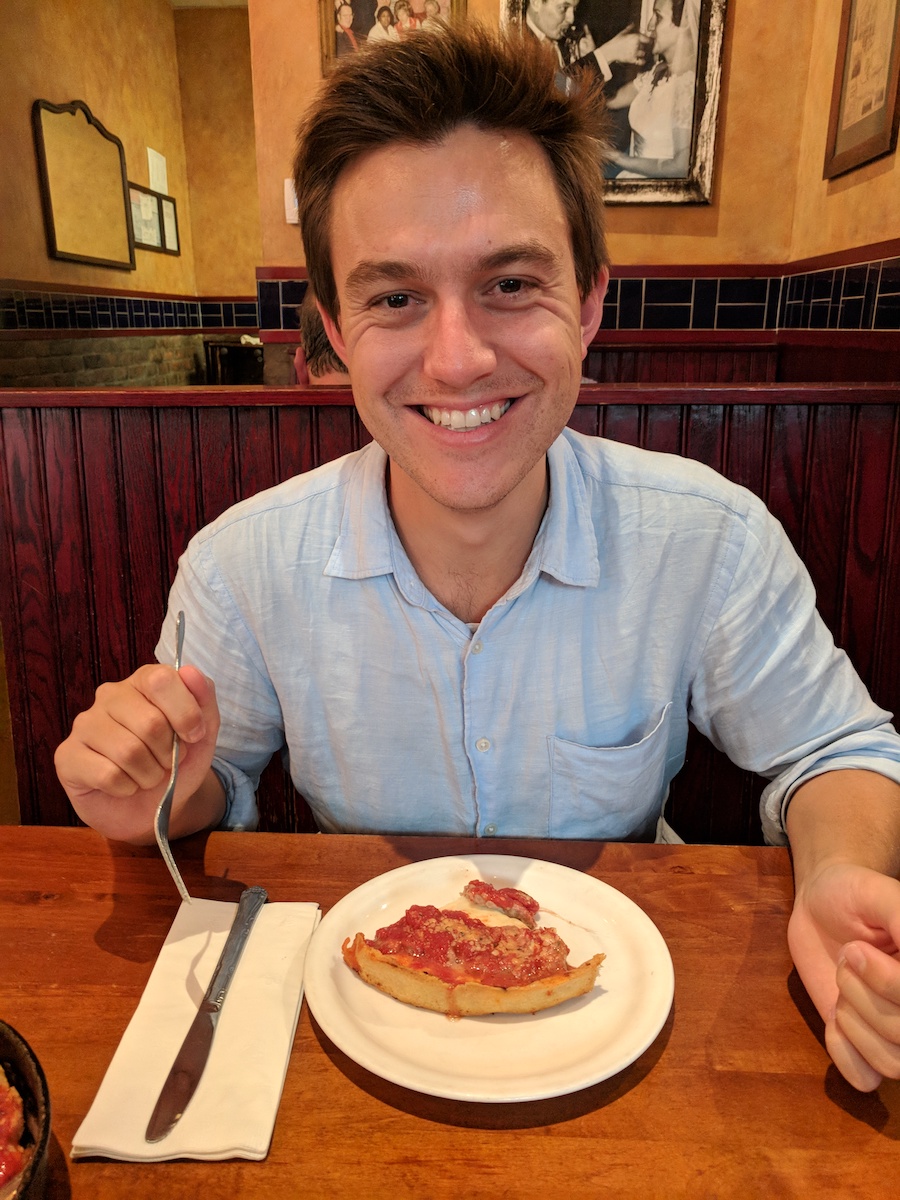 In Chicago, we used the last of my Hotels.com rewards points from my previous job to stay at the Wyndham Grand Chicago Riverfront, a luxe property by our standards in a great location right by the river. We were pretty underwhelmed by their service and got the sense we would have been treated much better if we’d been wearing suits, but oh well. I had never spent any time in Chicago so I made Amy let us get some deep dish pizza and take a couple long walks around the riverfront.

I’m really glad we took it slow instead of flying straight through all the way from Mauritius to Reno, even if it meant missing out on a day or two of beach time we could have savored before leaving. We arrived tired but not completely out of it and were pretty ready to go for the wedding festivities the next day! 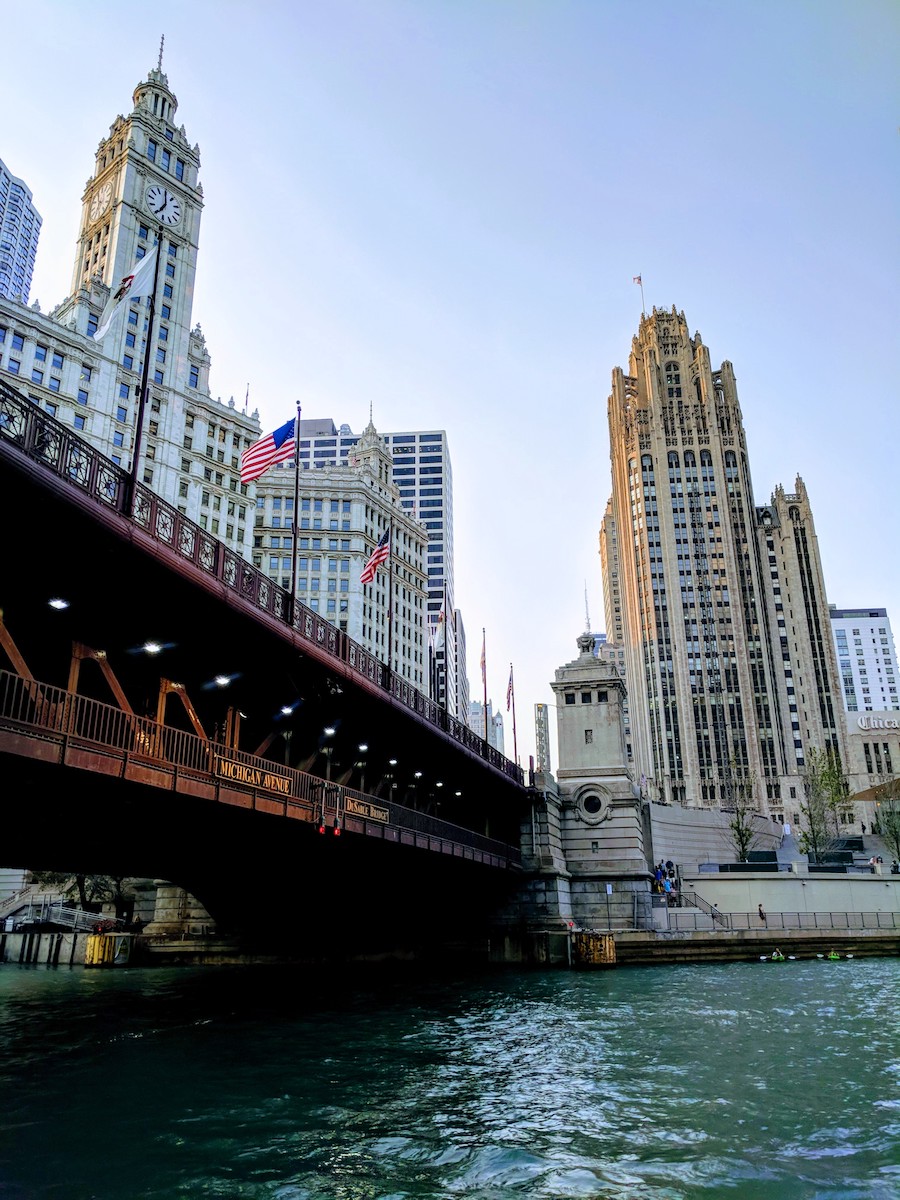 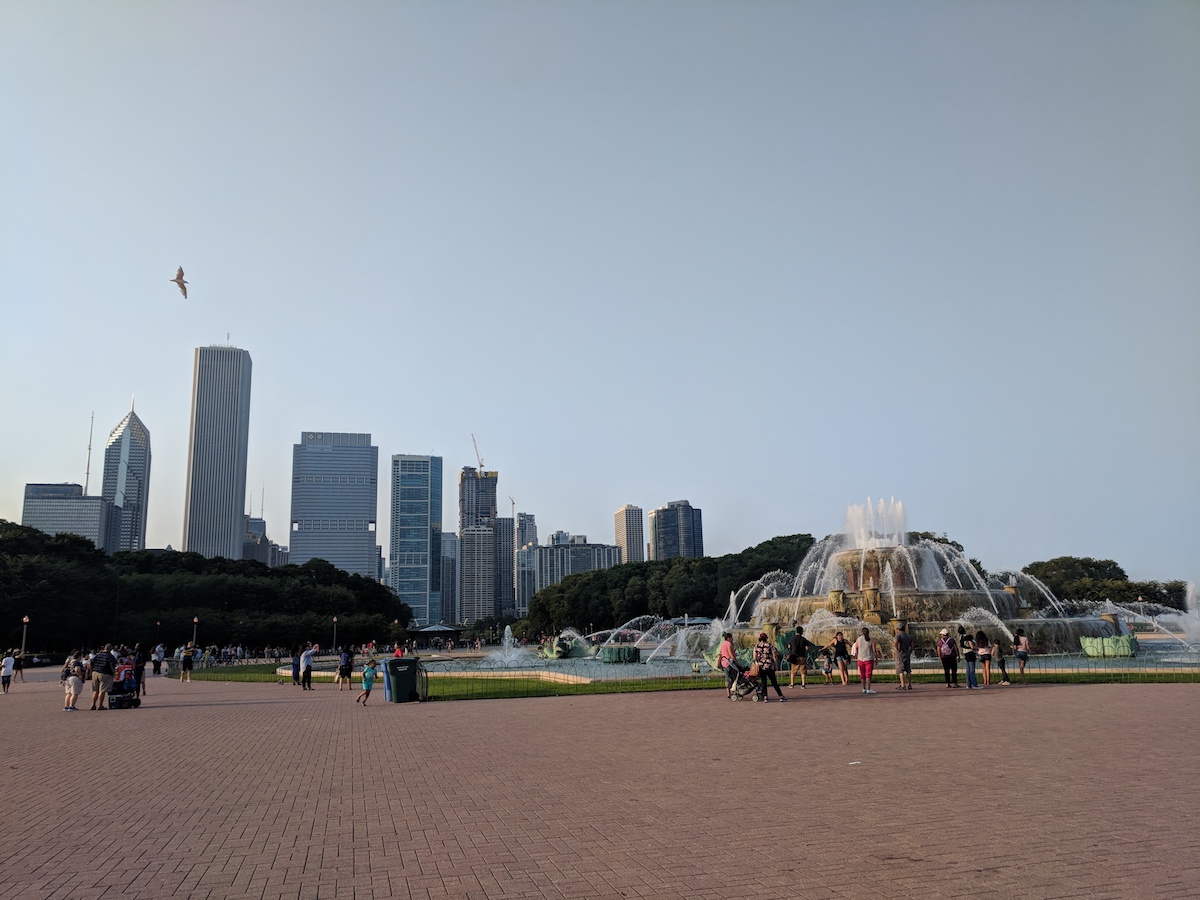 « Nerd Time: Final Stats
Amy's Thoughts: How A Year Away Changed Me »