Santiago: Space to Relax and Recharge 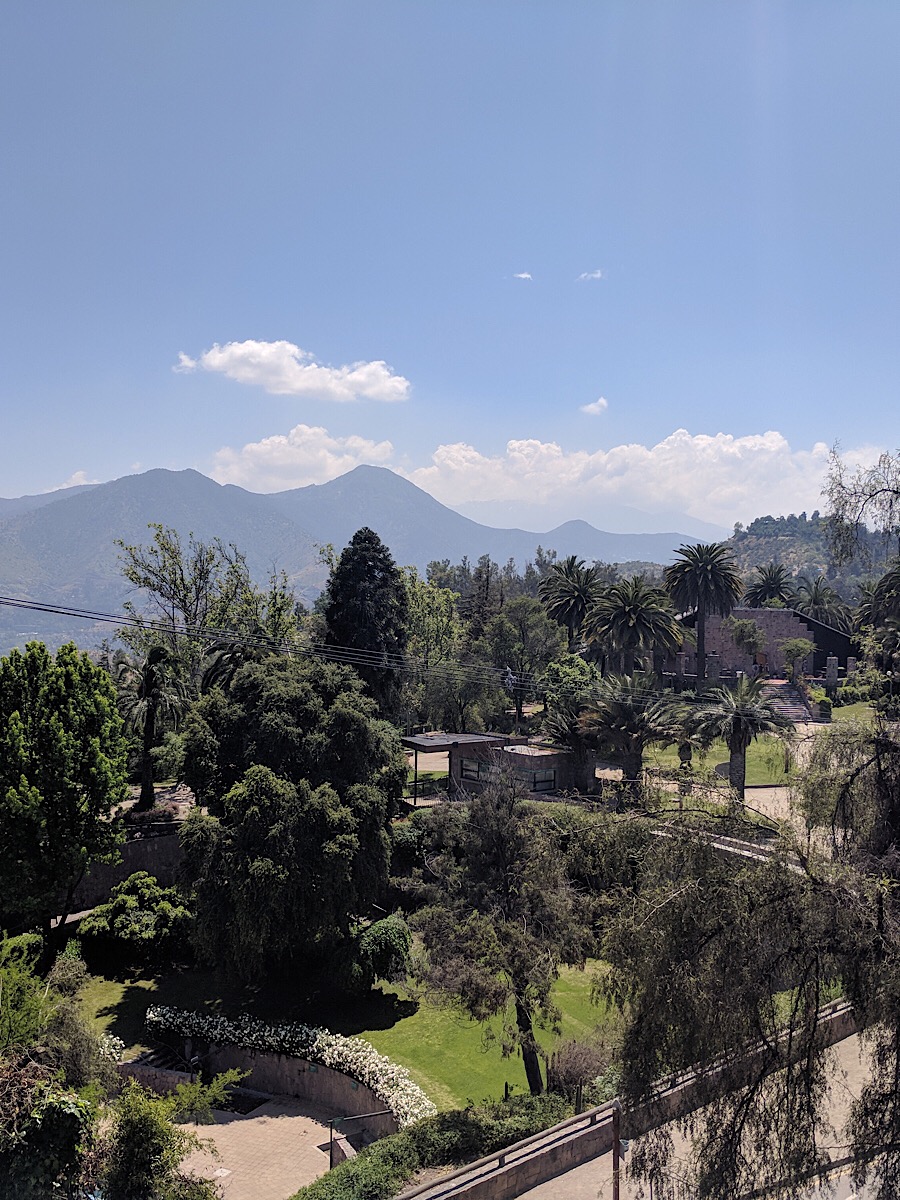 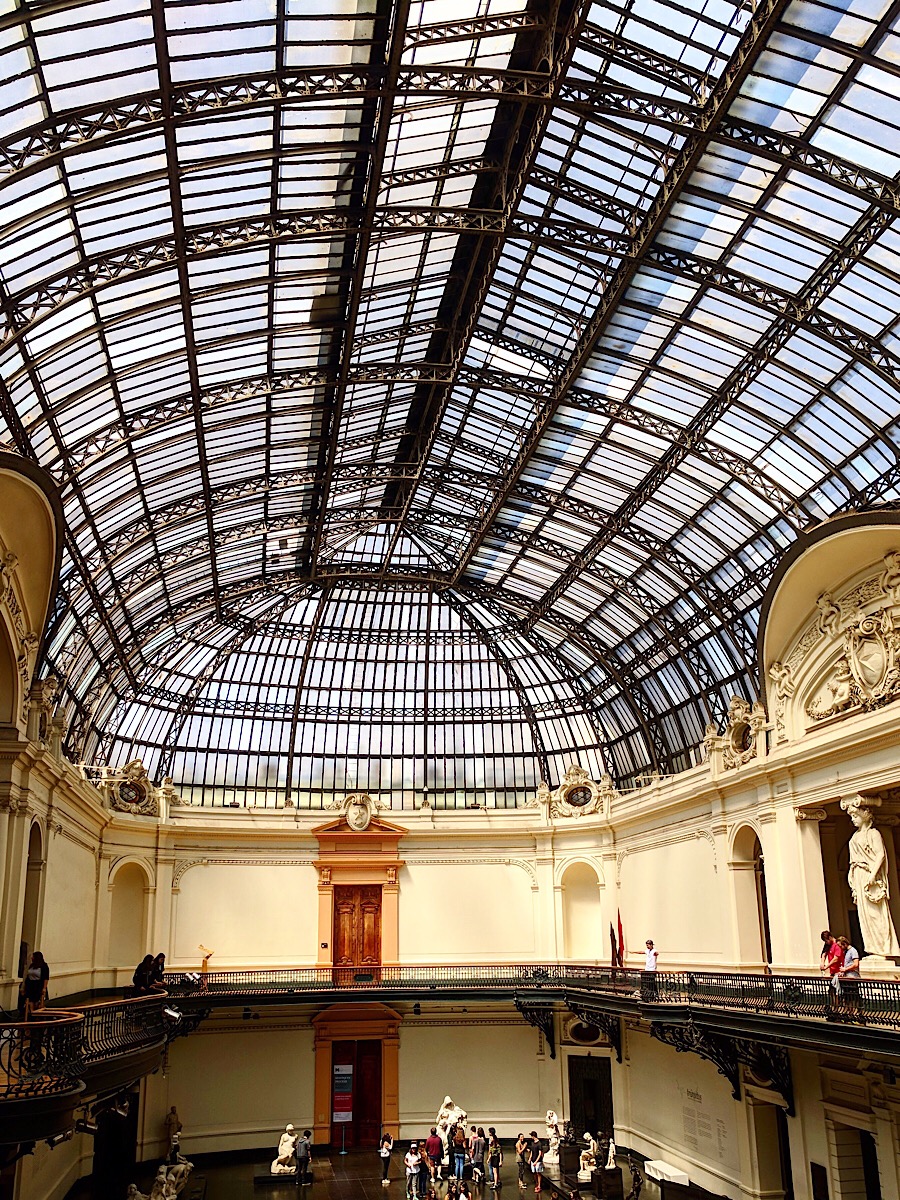 Getting to Santiago came at a great time in our travels. We started in Chile with almost a week on Easter Island, then we had another week or so in Santiago, a quick trip to Valparaíso, and finally a couple more days in Santiago before we flew to Bolivia.

Our time in Santiago provided a great way to recharge. Plus, we got to stay in two very different neighborhoods. 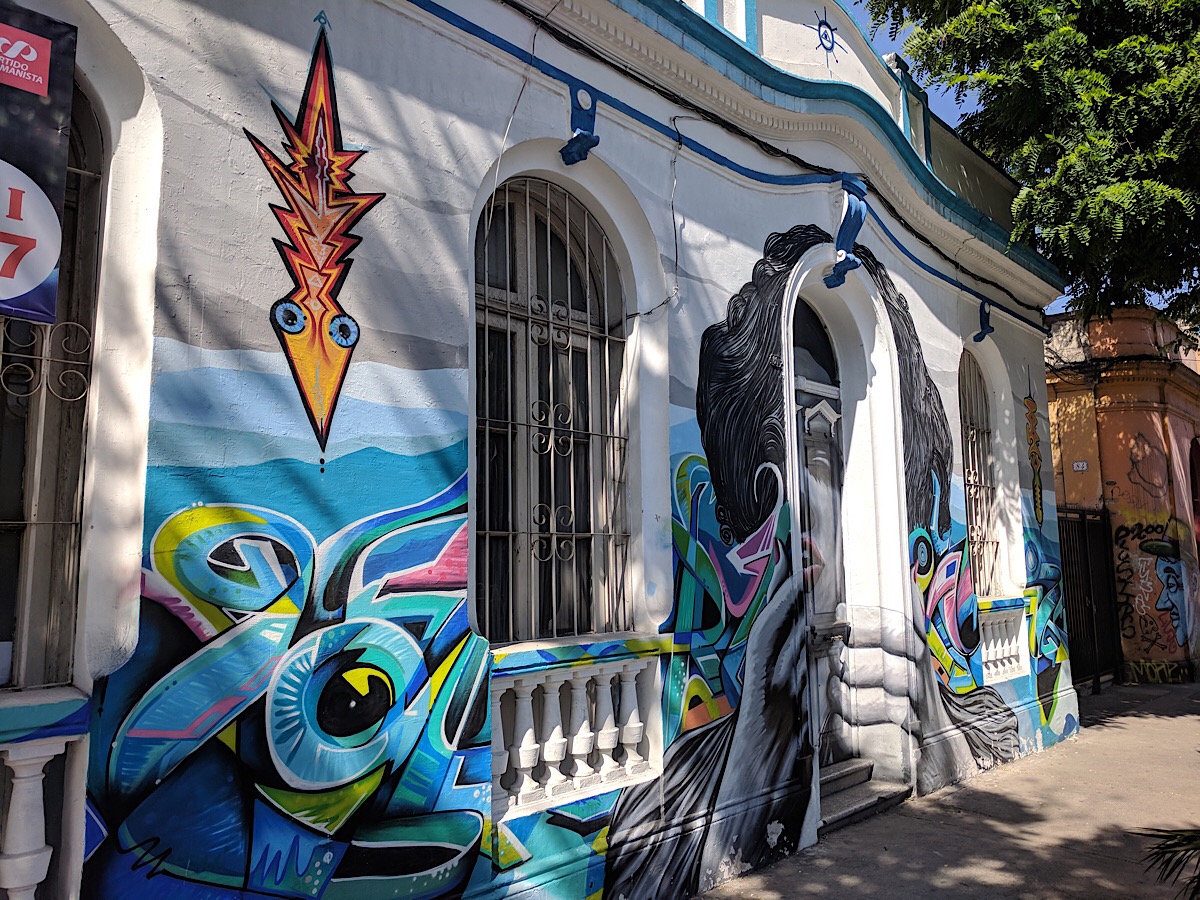 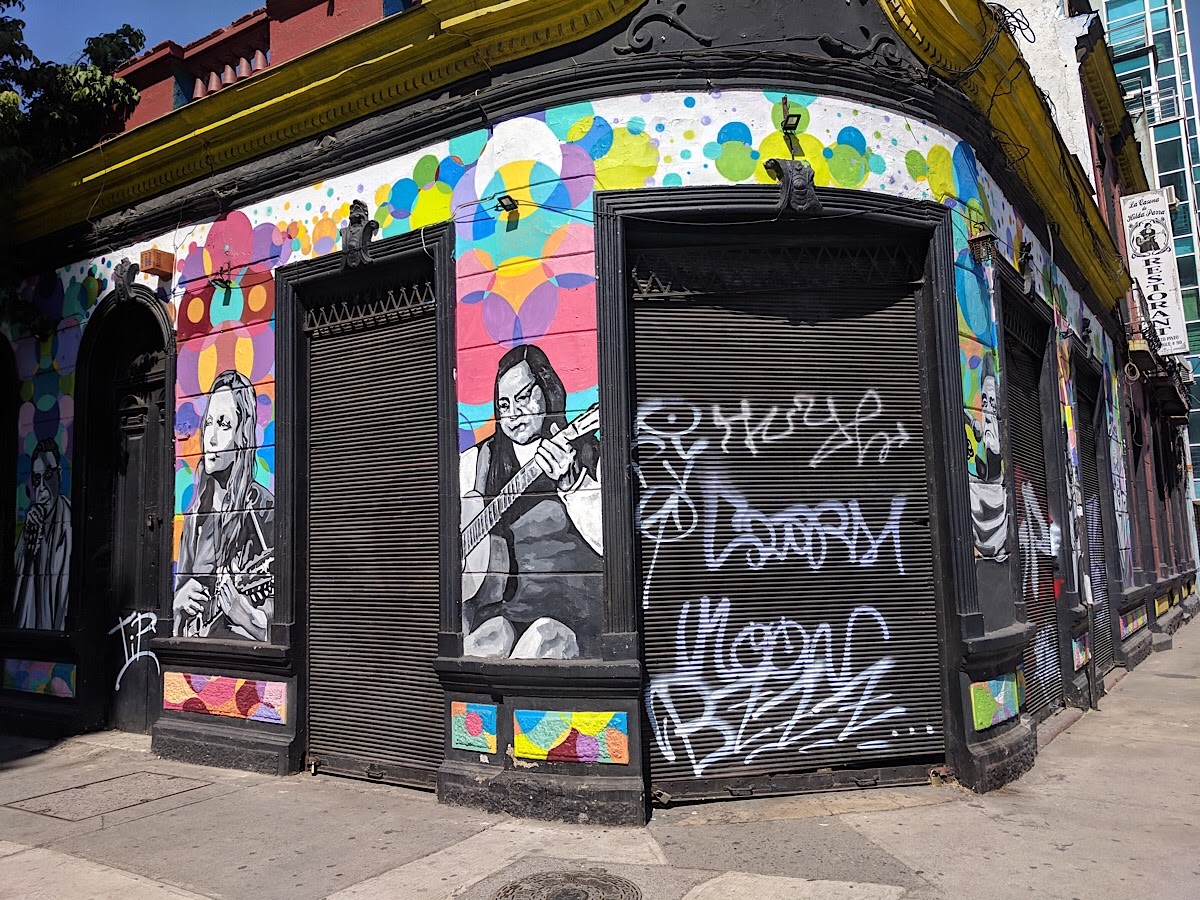 Bellavista is right near the downtown, has easy access to several main attractions in Santiago and is close to a subway stop. This neighborhood is young, hip, and full of life. There are plenty of backbackers and university students that keep the many bars, clubs, and restaurants busy until 5:00am, even on weeknights.

Honestly, we felt too old or at least not cool enough anymore for Bellavista. Unlike the revellers outside our window following drum bands or dancing, we had no desire to be out at 2:00 in the morning, or really midnight for that matter. There were times in my life where this would have been exactly what I wanted. After days of adventuring, I was not prepared to relive my “glory days” though. If you’re looking for a quiet neighborhood, this is not it. There are tons of restaurants though and it is easy to walk to so many places that if the noise doesn’t bother you or you want to be one of the revellers, then Bellavista is the place for you.

Our second time around in Santiago, we gave Lastarria a try and it was much more our speed. It is on the other side of Park Forrestal but still walking distance to the downtown, Central Market, Museo Bellas Artes and much more. It is also very easy to access the subway and we found it more convenient to buy groceries as well. Most of all it was much quieter and and both Nate and I had some sort of stomach bug and needed to do some resting/recuperating, it was nice to be able to sleep soundly through the night.

My favorite part of Lastarria is the proximity to Cerro Santa Lucia. The park is beautiful with a castle of sorts on top, fountains, plenty of pathways, and grassy areas to laze around and read. It was probably my favorite part of the city.

Lastarria is also home to the very popular Bocanariz wine bar. We had unfortunately saved it for our second stint in Santiago and red wine did not mix well with stomach pains so we missed out. Every single person we talked to about recommendations, mentioned this place though. So, it must be worth a try. 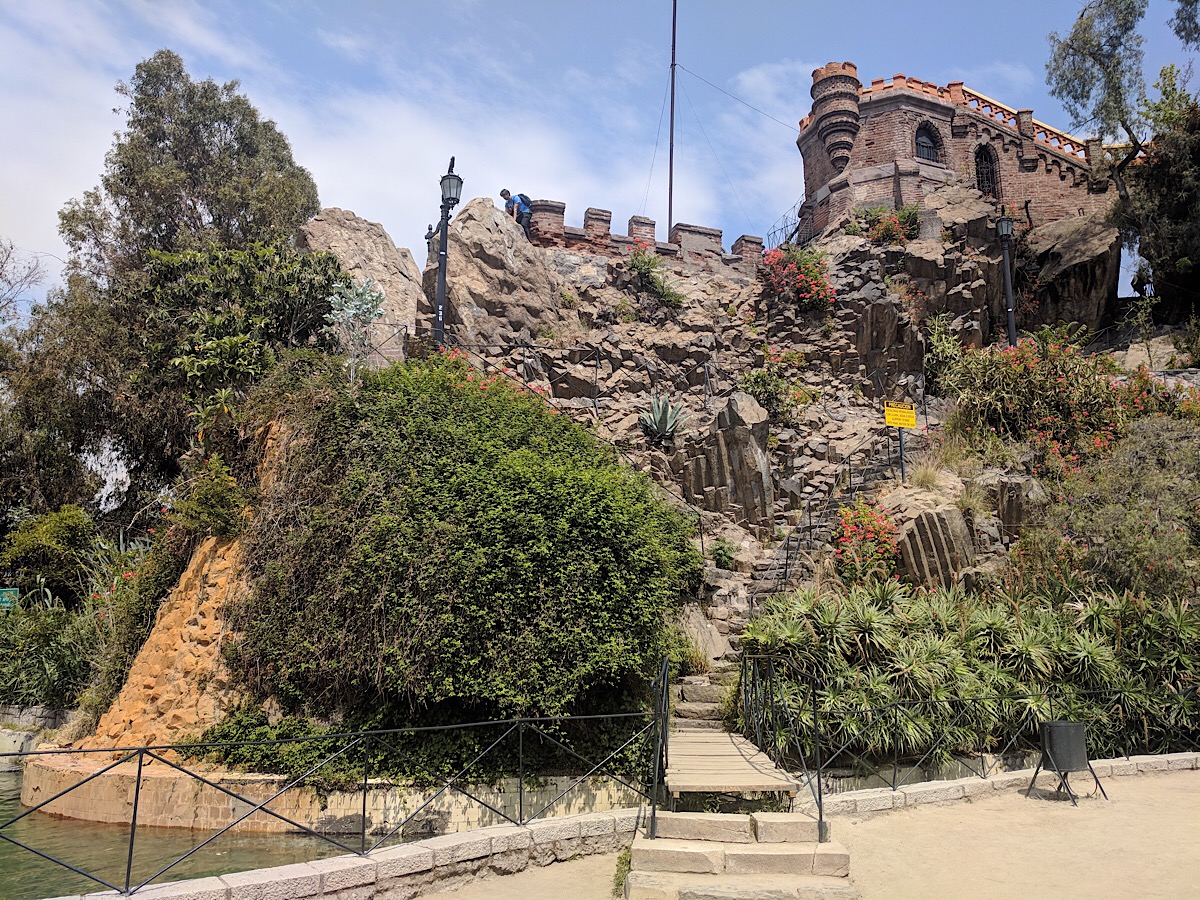 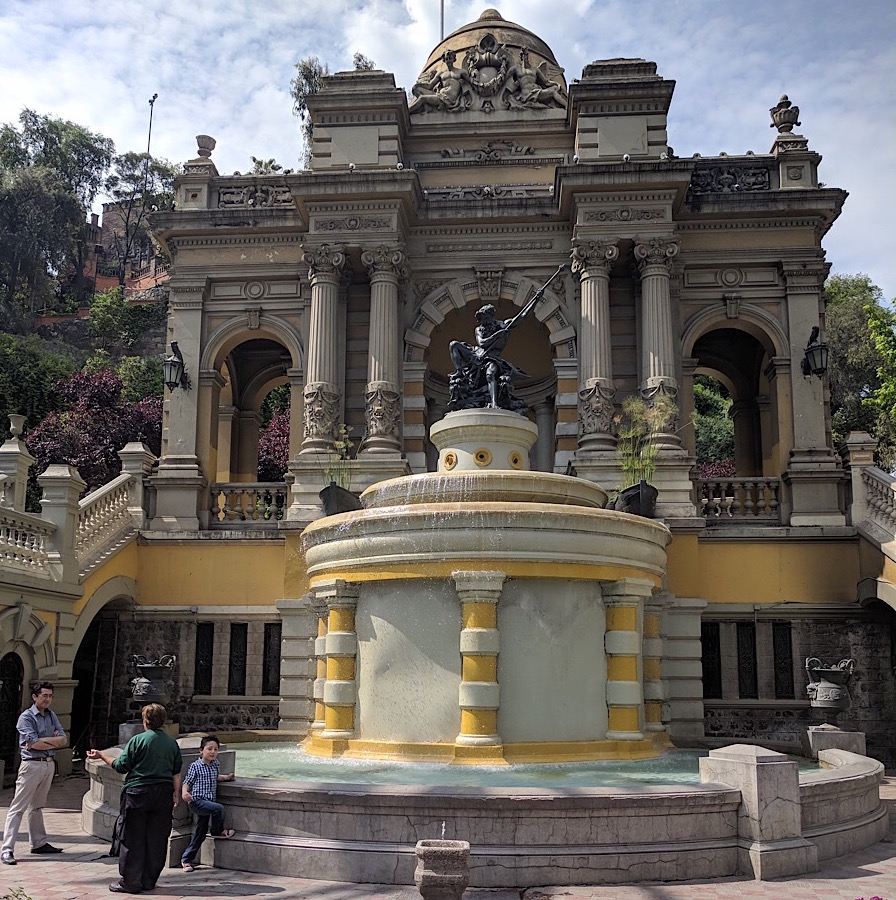 For Chile, with the desert in the north, Patagonia to the south, and vineyards filling out the central area; the attractions of Santiago are not what first jump to mind when you think of this long, thin country. We already plan to make a separate trip sometime in the future to enjoy the wonders of Patagonia but in the meantime, Santiago does have some attractions to entertain.

The downtown has plenty of history with La Moneda (the presidential palace), the “Wall Street” of Santiago, and the Museo Bellas Artes, but we actually prefered wandering through the markets. We took a guided walking tour specifically focusing on the local markets, which made getting to know the markets more accessible. We even got to stop for sopapaillas, which were delicious and so cheap that they made us stop again for more when we were in need of a little snack. 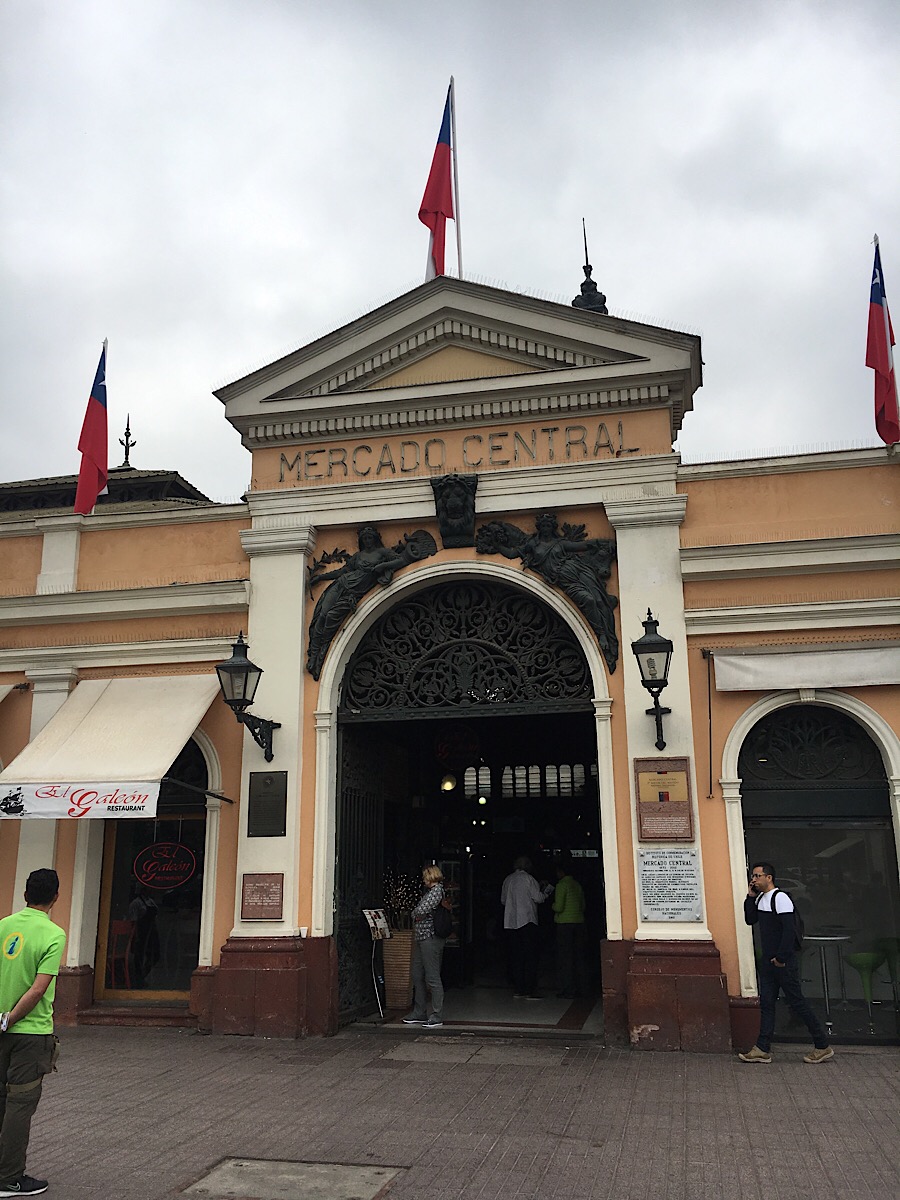 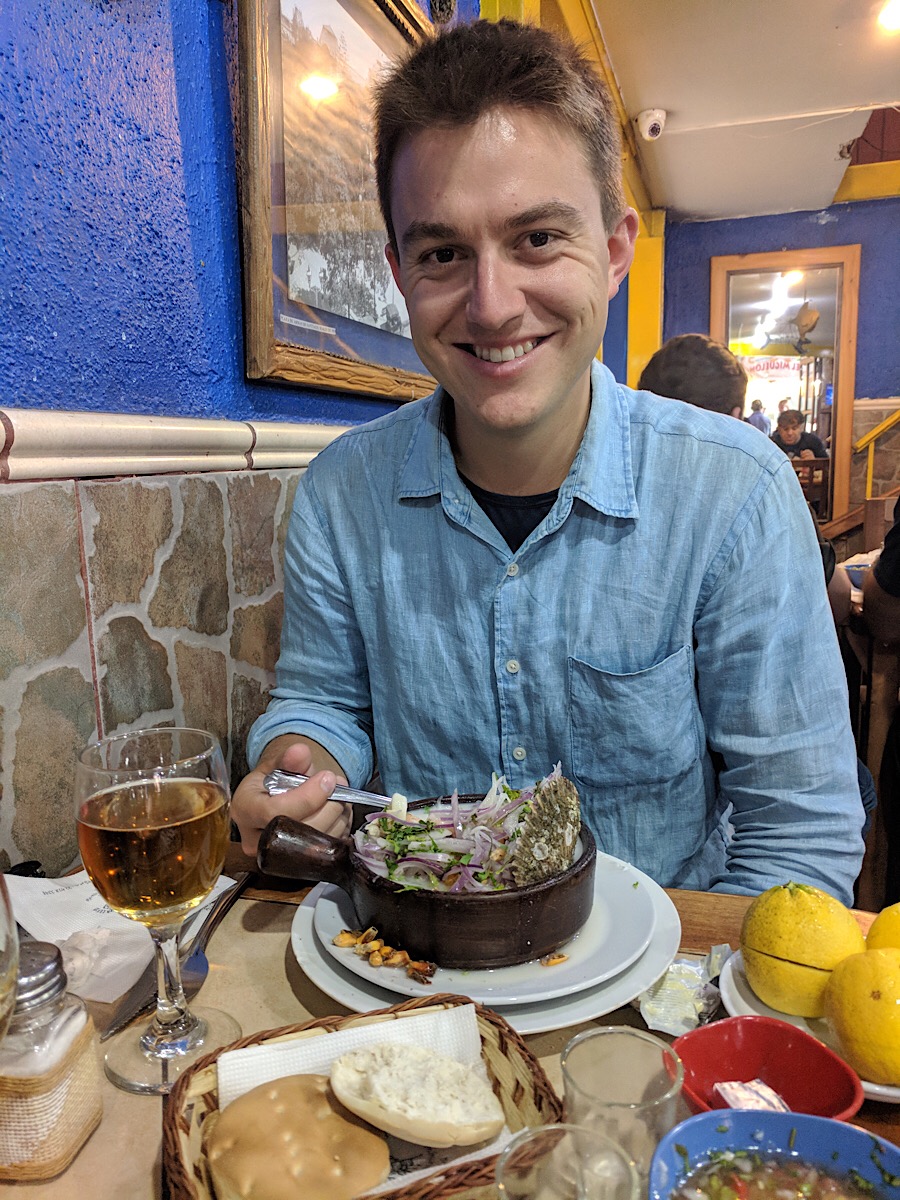 The fish market is a must visit but please ignore the large restaurants in the middle of the market. They are impressively huge with very pushy staff trying to get you to stop to eat there. Stick with the restaurants on the perimeter though. We went to “Tío Willy” for ceviche and pastel de jaiba (crab pie). We were welcomed by a jolly man that called us cousins, the place was a 50/50 split of tourists and locals, and the waiter seemed to know all the locals well enough for hugs and kisses to be exchanged when they came or went. They also started us off with a complimentary pisco sour shot and gave us a sweet aperitif to end the meal. Then when they check took too long to arrive, we were given an extra aperitif to ease the wait (only as a “professional” traveler can you have 3..wait we also had beer…4 drinks with lunch. It’s not cheap, though much cheaper than the larger restaurants, but it was so good and the service was definitely entertaining. 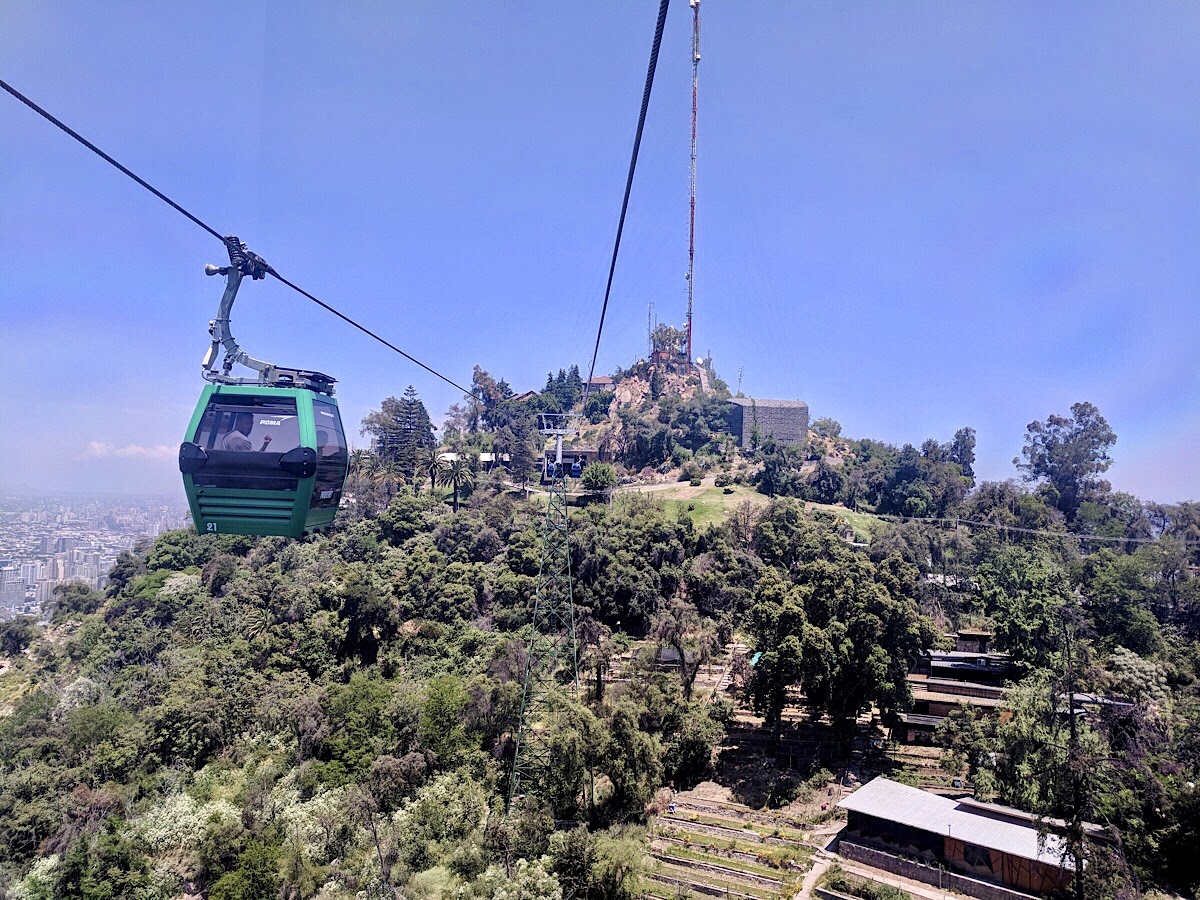 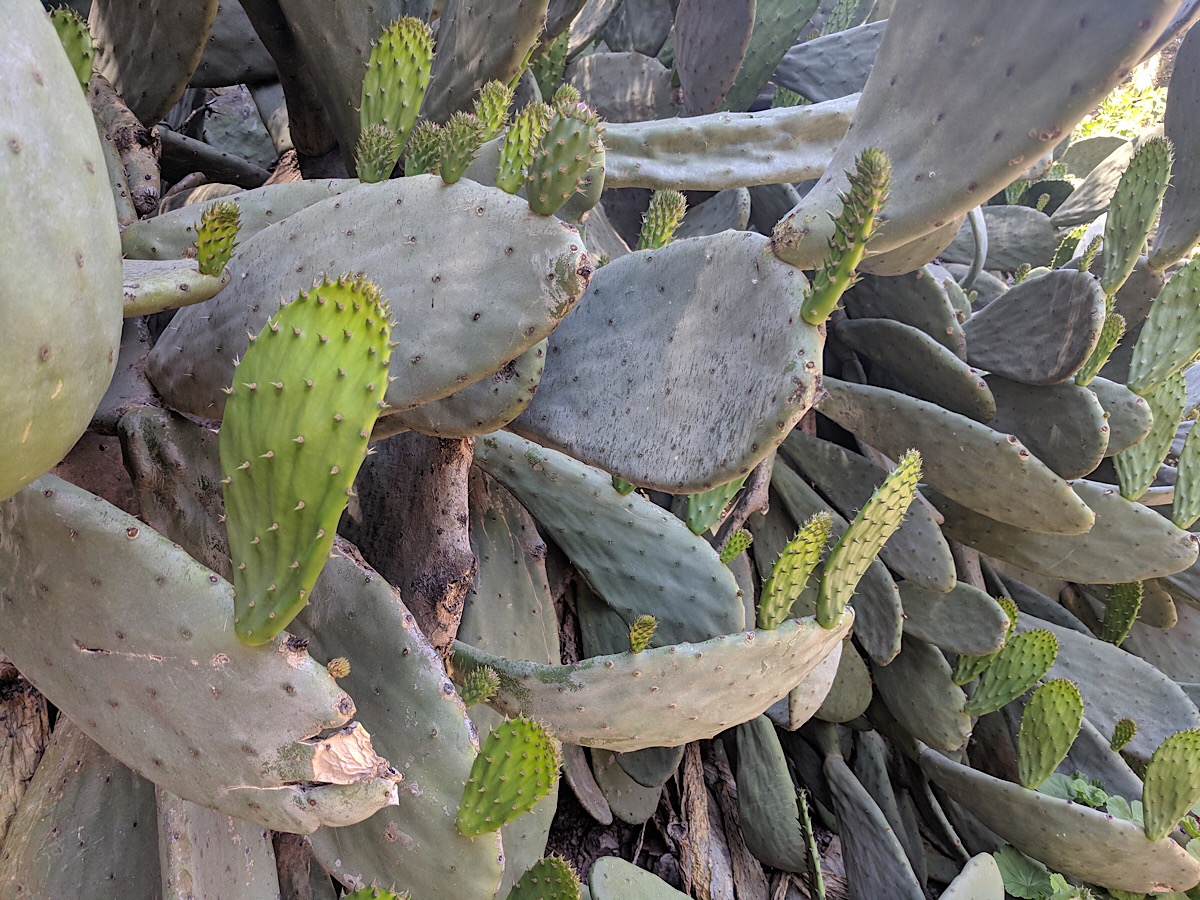 At the top of San Cristóbal, you can visit the shrine to the Virgin Mary, have a snack at a cafe, or if you’re brave enough, bike back down the mountain. Some brave souls we saw were even biking up. I was not up for either and taking the funicular back down was fine by me.

The whole area is covered in parks so there is plenty of hiking and a beautiful swimming pool right off the middle cable car station that was unfortunately closed while were were there. Nothing like taking a swim with panoramic views? 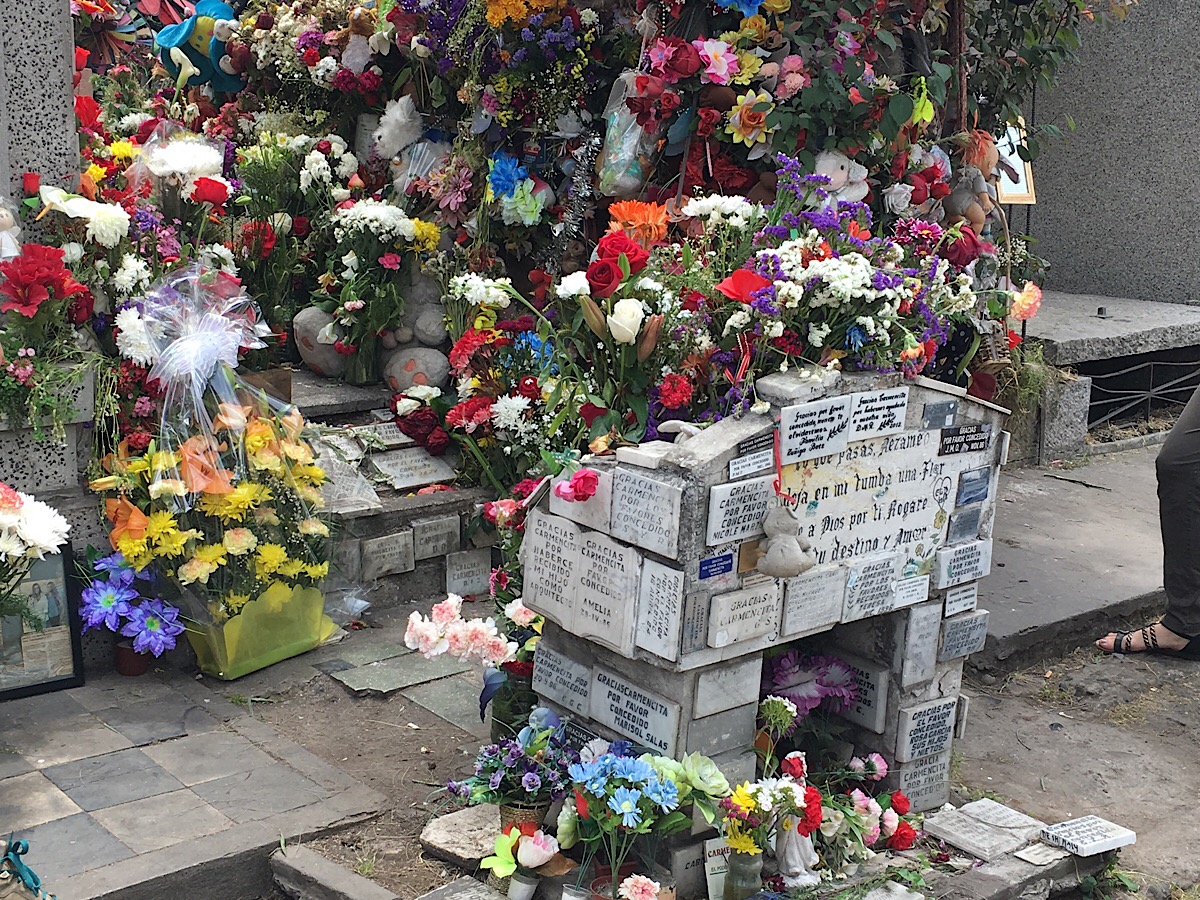 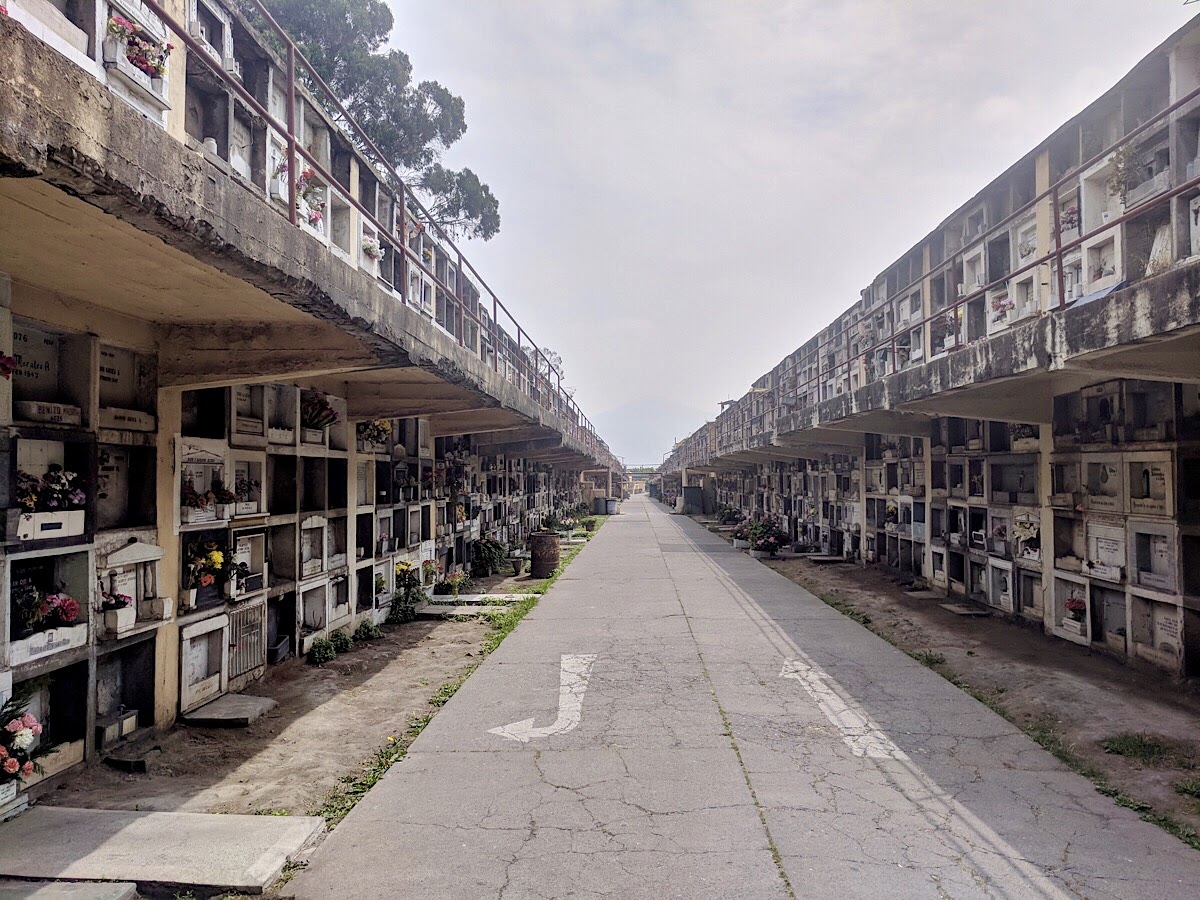 The same tour that took us through the markets, ended at the Central Cemetery. Apparently visiting the cemetery as a tourist attraction isn’t as strange as I thought. Here it is treated much like a park, with people listening to music, relaxing, and according to our guide, it is even a popular first date spot.

The cemetery is huge, so there is plenty to see. There are the walls of graves, mausoleums, and shrines to innocents, often young children, who suffered terrible deaths. These are thought to be given a place closer to God when they die and are therefore better positioned to whisper request. Many people make requests and bring gifts of thanks when these wishes are answered. The photo below is from the grave of Carmen, who was a young girl who was brutally murdered. She sees many visitors who hope she will pass along wishes and hopes. 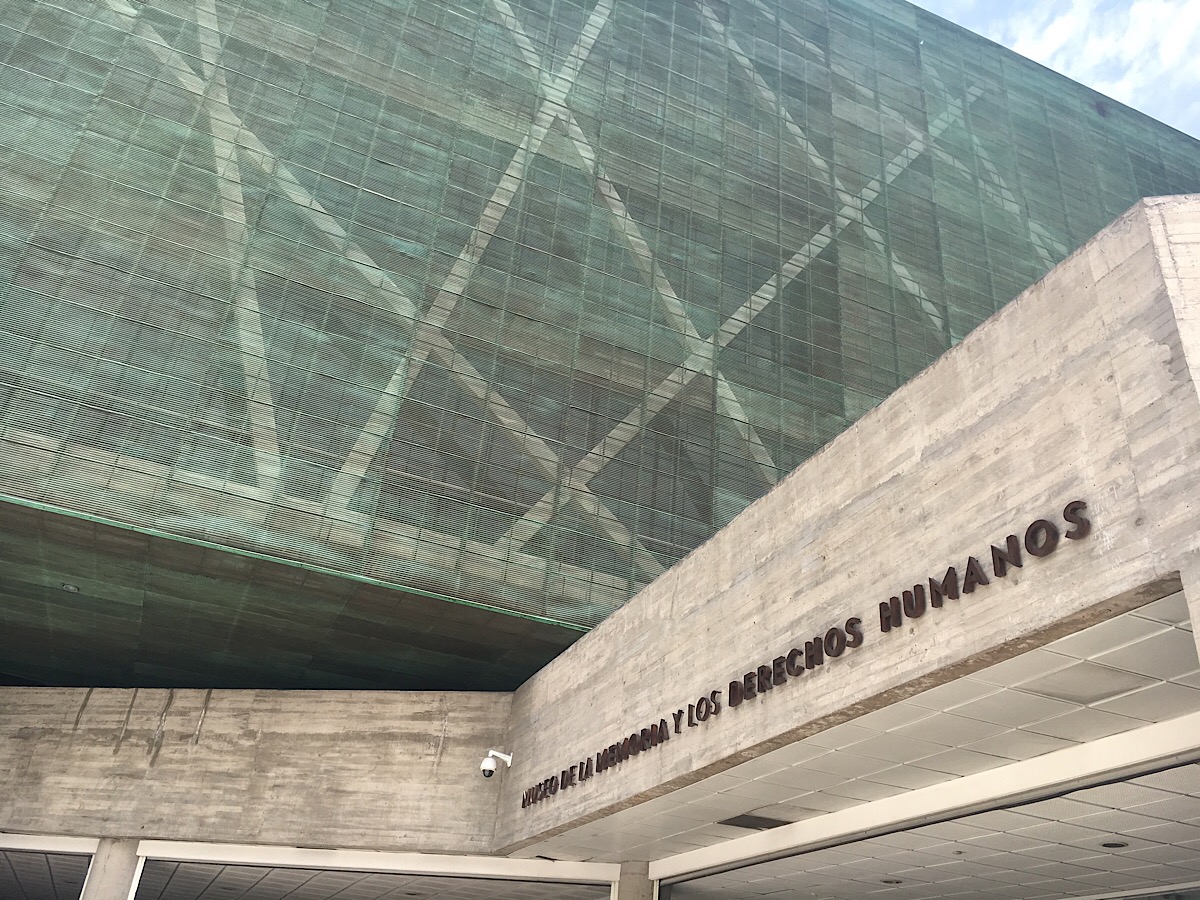 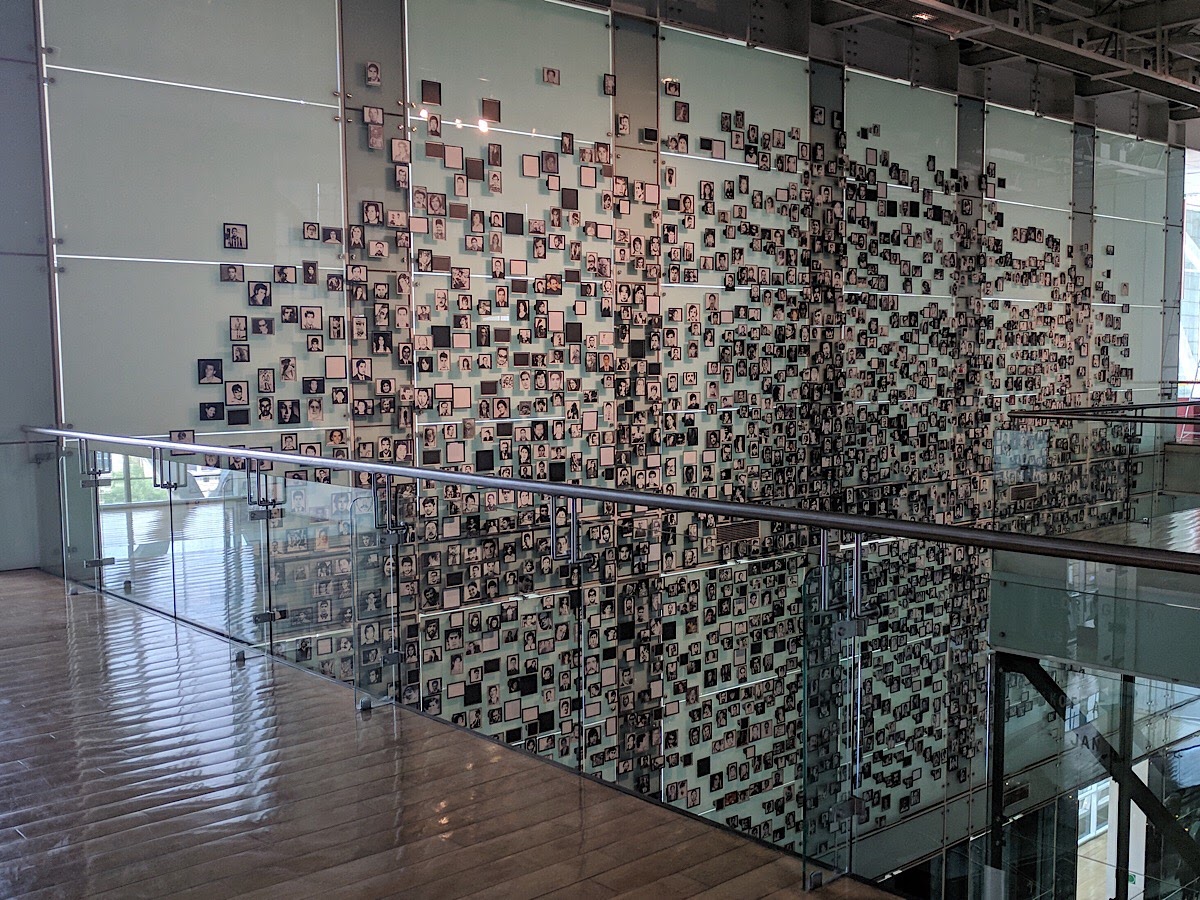 Another stop that is on everyone’s’ list for Santiago is the Museum of Memory and Human Rights. It is right next to Parque Quinta Normal, which is well worth a visit in its own right. If you don’t speak Spanish well, the audio-guide is a must buy. It’s only ~$4 and will completely change your experience of the museum. There is a lot of content but if you can’t read the primary sources or understand the videos, there is not much signage to help you out.

The museum is modern and quite striking and the content is well-curated, thorough, and as sad as you would expect. The museum covers the years leading up to, during, and after the coup that brought a military junta to power and Pinochet to prominence. It has a moving wall of memory with photos of those who were killed by the regime at the time, with blank squares to mark the places of those that have not been identified but were “disappeared” nonetheless. If you don’t know much about Chilean history and politics; you will walk out with a better understanding. It is a state-run museum though, so just keep in mind the perspective while consuming the content.

Parks are an attraction all their own here. I’ve mentioned a couple (Parque Qunita Normal, Forrestal, Santa Lucia, and San Cristóbal) but parks are all over and they are more used here than anywhere I’ve ever seen. By mid-afternoon, they are crawling with people. Some are coupled up on benches or blankets on dates, some are eating lunch, some are walking dogs, some are selling ice cream, and some are fast asleep. It’s the first place where I felt that laying in the park reading constituted experiencing the culture. There is so much activity, so many opportunities for people watching, and more than a little PDA (public displays of affection). Apparently the conservative home life of many young people make parks a place of privacy in many ways. Regardless of which park you pick, pick a park and enjoy, preferably with some helado (ice cream). 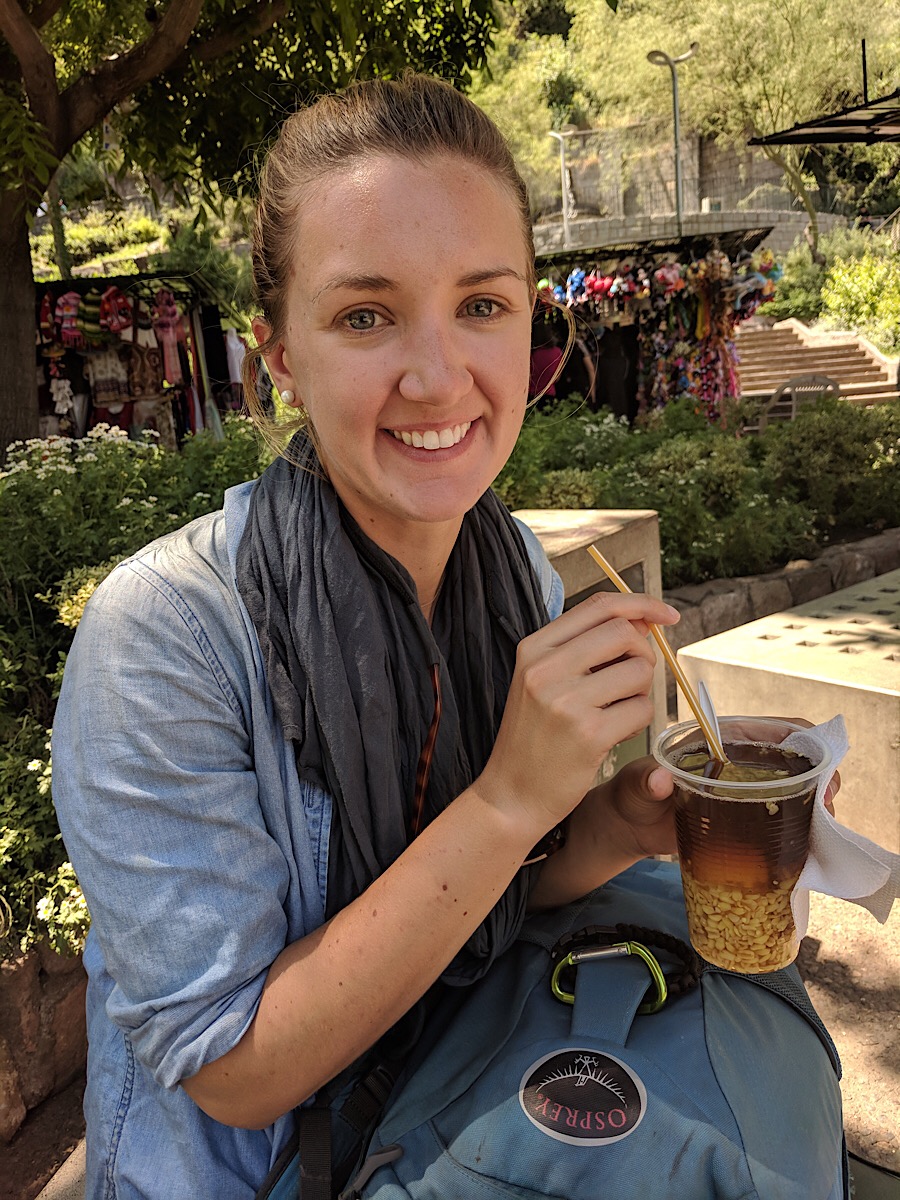 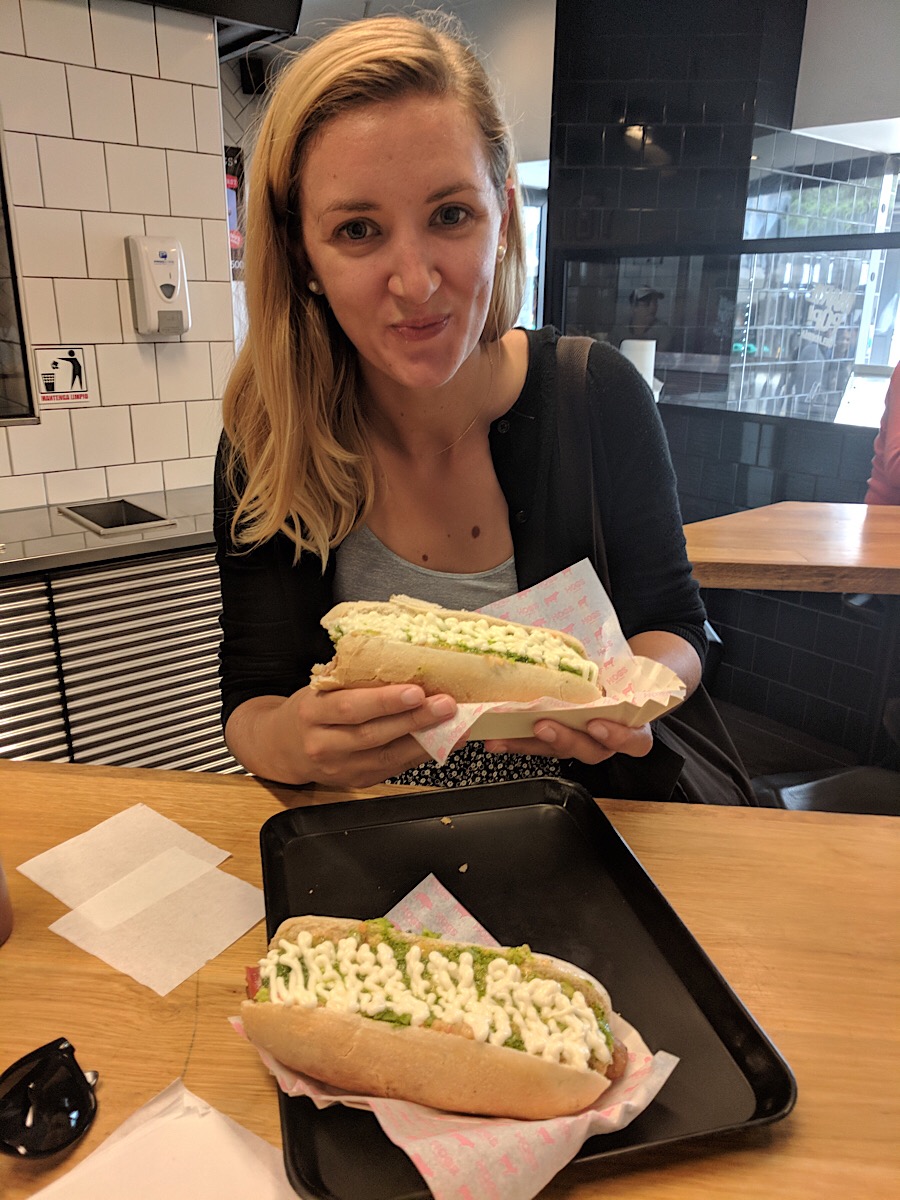 We learned to cook some more traditional Chilean dishes while we spent a few days in Valparaíso but we tried a few other dishes while in Santiago. We had the pastel de choclo (corn pie), ceviche, mote con huesillos, pisco sours, and completos.

My favorite was the Mote con huesillos. It’s a cold drink with cooked wheat in the bottom, a whole dehydrated peach, and caramelized peach juice. It is sweet, cold, and refreshing. Vendors around the city sell it for about 1.30 USD. Just like the Caldo de Cana (freshly squeezed sugarcane juice) in Rio, this sweet treat brought me right back to my southern sweet-tea-drinking roots. It also made me remember that it is a good thing that I almost exclusively drink water these days because I like these sweet drinks more than is good for me.

Another staple that is not so traditional is the completo, not to be confused with a hot dog (though it is basically a hot dog). It is a sandwich with something that looks a lot like a hot dog but it is covered in diced tomato, avocado, mayonnaise, and onions. Sometimes they have sauerkraut and hot sauce too. This is apparently a go-to lunch food, snack, and hangover cure. They are very cheap and sold all over.

Santiago is a lovely city. People I know who have studied here or lived here long term have loved it. It seemed to me like a place where living is better than visiting but there was plenty to keep us occupied and it was a welcome break from our more strenous traveling pace before we pick up again heading through Bolivia and Peru.

« The Street Art of Valparaíso: Is it more than just graffiti?
Bolivia: La Paz, Lake Titicaca, and off-roading in the Bolivian Countryside »