We weren’t quite sure when we made our plans whether we would want to spend 5-6 days on Ilha Grande. In hindsight, we absolutely should have.

Instead, we made our way to Paraty. Before we left, I had read blog posts from other people who had visited about how charming the city was, how the architecture was influenced by the Portuguese colonization, that the streets were cobblestone with only horses and carriages making their way through the historic downtown, and that it was a great place to relax and recharge. Some called it “enchanting” or a “hidden gem.” So, I had high hopes that I would be swept off my feet. Nate was highly skeptical already, especially after how much we enjoyed Ilha Grande but was ready to be surprised.

Unfortunately, at least for us, Paraty was less than enchanting. Yes, the cobblestone streets and brightly colored doors are pretty but it is slightly more difficult to enjoy them when there are 18 people trying to pose for photos or selfies every few steps. I’m getting ahead of myself though.

Day 1: We took the same transfer service from Ilha Grande to Paraty that had brought us to Ilha Grande from Rio. So we re-boarded the boat and piled into another van at the other side. The trip was largely uneventful until we got to Paraty and the shuttle driver could not find our Airbnb. We were staying a bit outside the primary tourist area and had to try out best broken-Spanish/fake-Portuguese to get him to the right address.

Once we arrived, we got to the best part of our time in Paraty. The room we rented had an absolutely amazing view of the jungle and ocean beyond, complete with balcony and hammock. 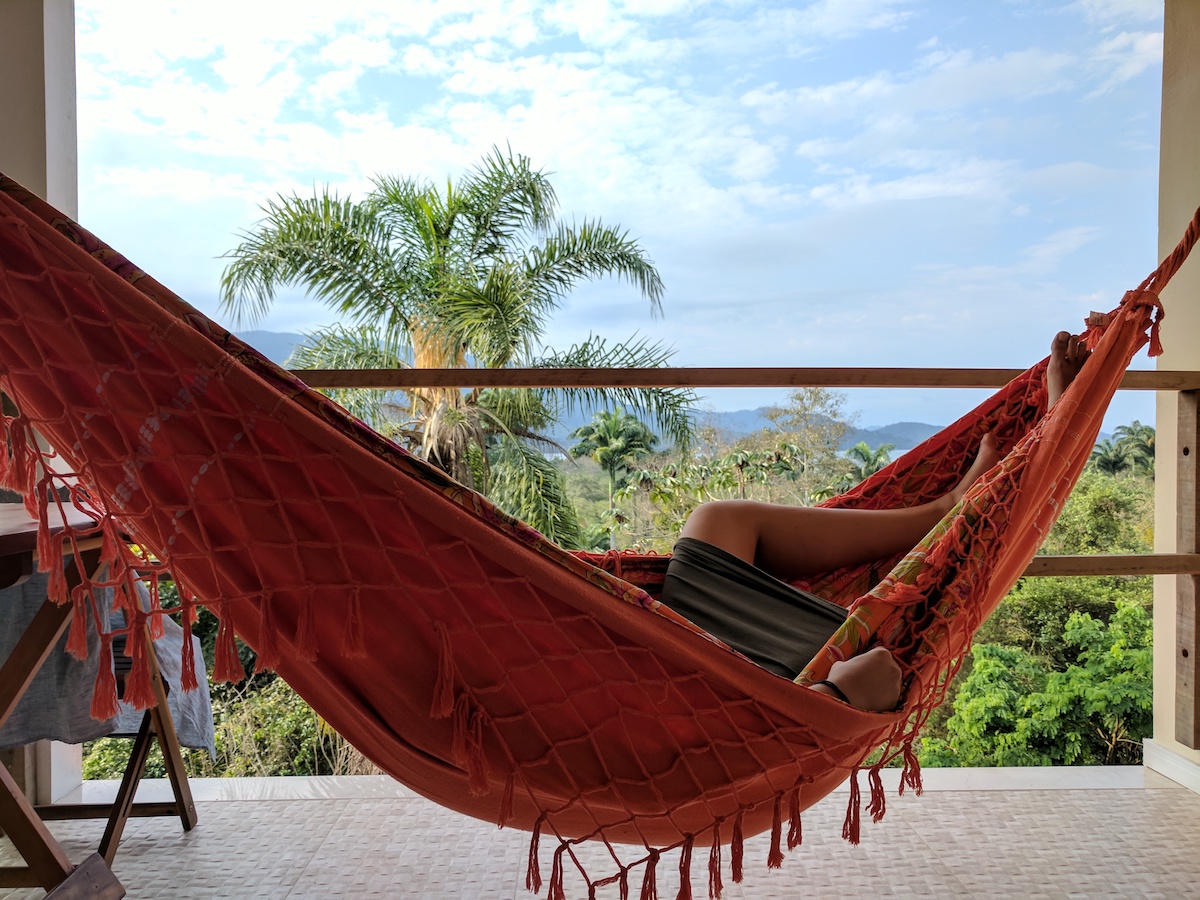 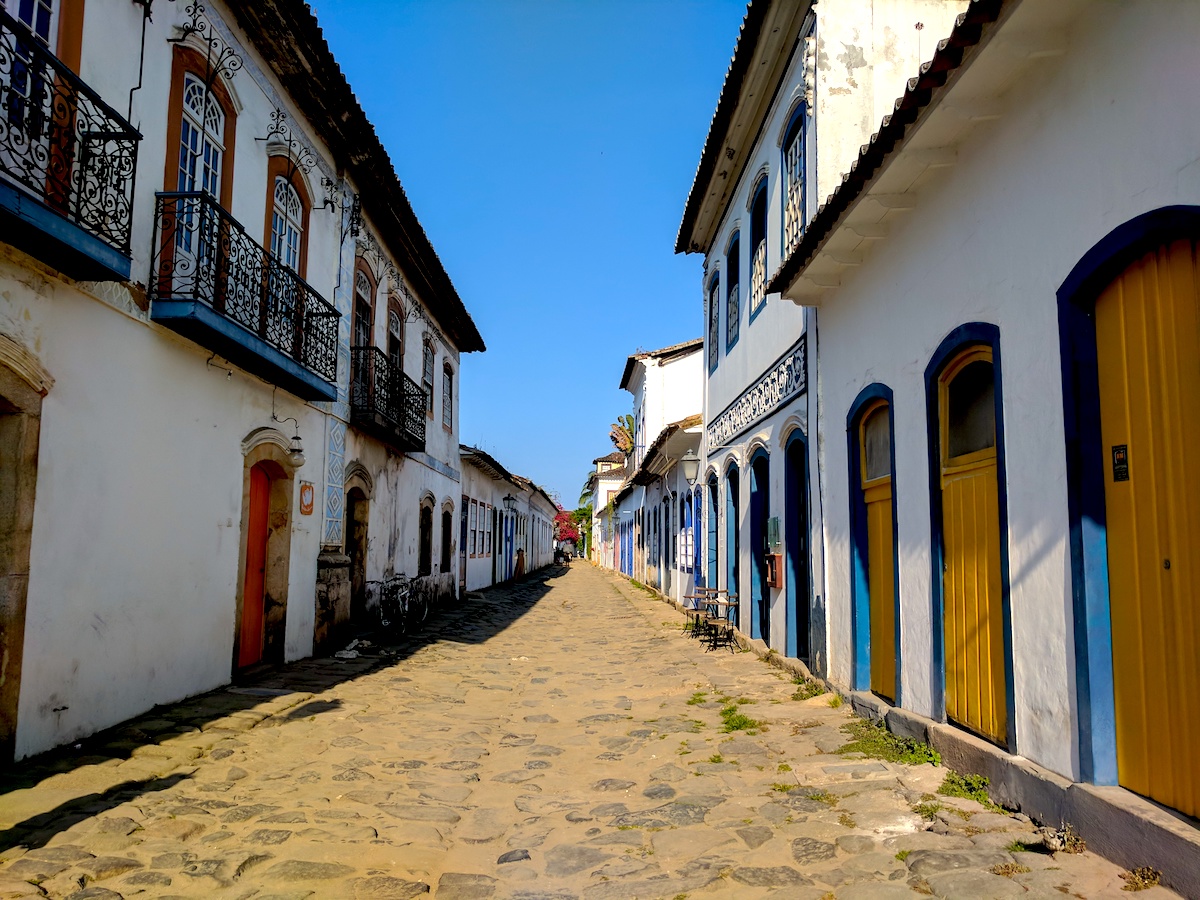 After settling in, we decided to get a look at the promised adorable streets and hopefully find some dinner. We made our way to the downtown and it was true, the cobblestones feel authentic. You have to watch where you’re stepping and I was grateful for the extra room I have in my Chacos to absorb the impact my toes would have made on many many cobblestones. After only a few minutes of walking through the downtown, we started the feel a little funny about it. There were people everywhere, but just tourists posing while pointing at the brightly colored doorways or holding their boyfriends hands while looking away from the camera in the ultimate Instagram-able pose. We should have known as soon as we saw that the street signs were sponsored by MasterCard that something was terribly wrong. 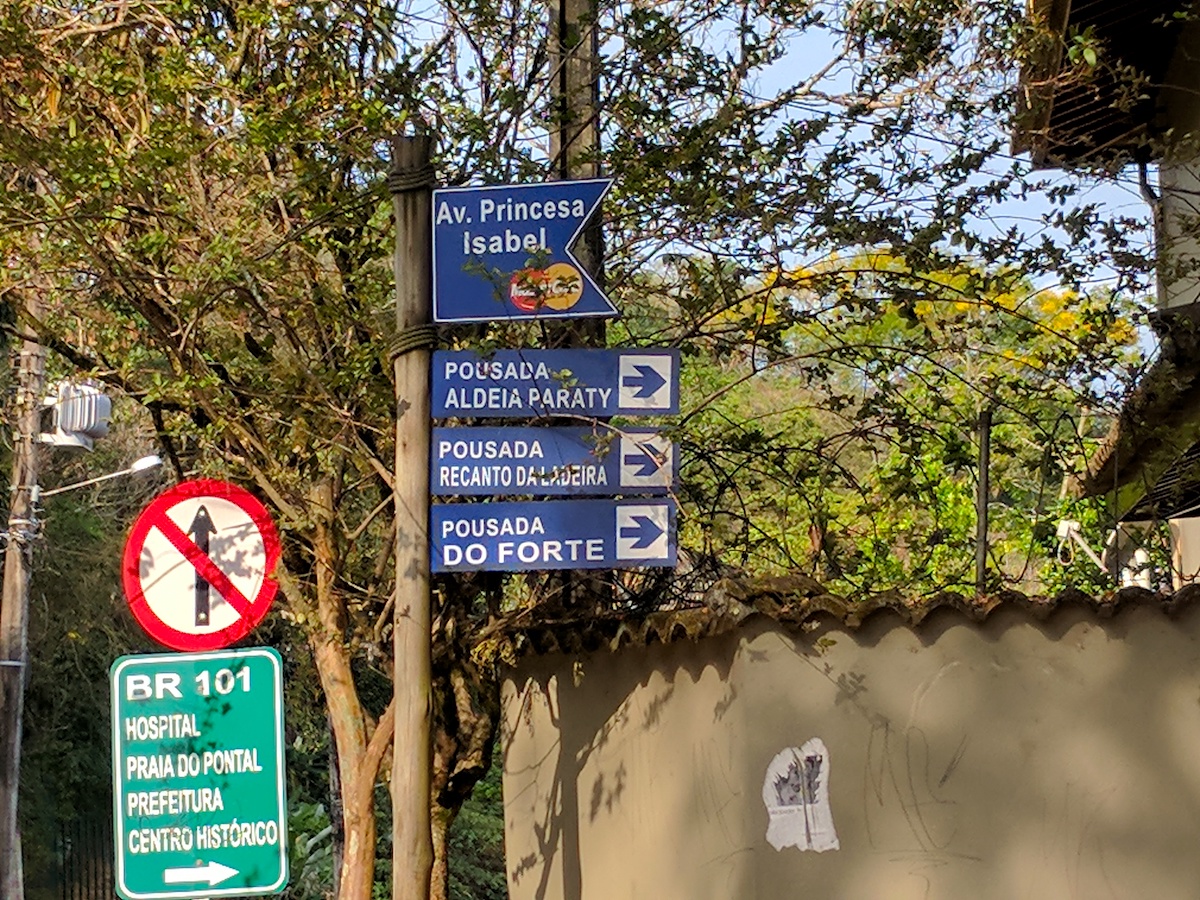 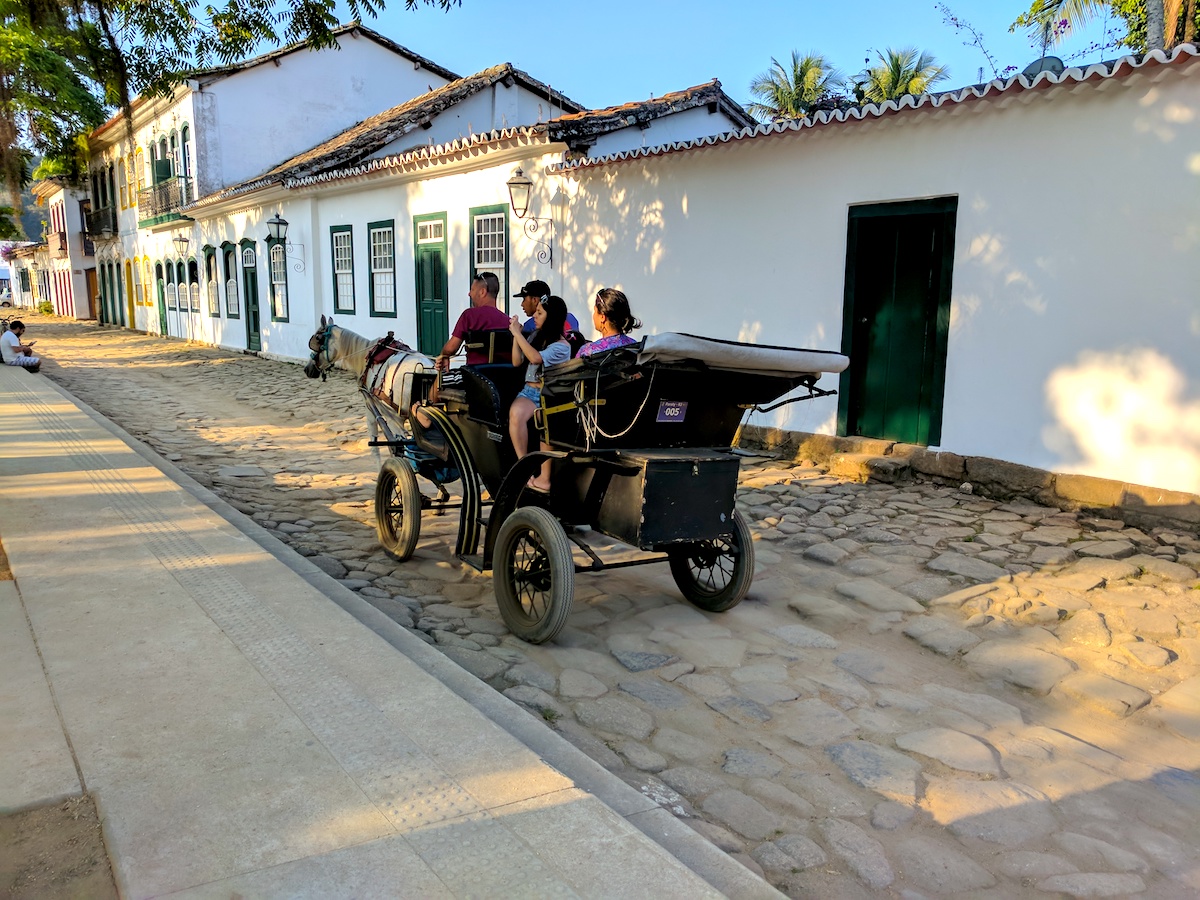 The other downside to Paraty, especially after we were surprised at how affordable food ended up being on Ilha Grande, was that food was expensive. We couldn’t find dinner options were a plate was less that $15 (USD). I had read plenty of posts about amazing food in Paraty. Unfortunately, it was not in our budget to spend $70+ on dinner. Feeling a little deflated, we opted to make dinner at the apartment and enjoy the view.

Day 2: Determined to make the most of our time in Paraty, we decided to change our approach and head to Jabaquara Beach on the morning of our second day. Unlike Ilha Grande, the beaches in Paraty are more developed, right off a road with restaurants dotting the area between the street and the beach. There wasn’t much shade and we felt lucky to find a spot under a lone tree, right near the water. 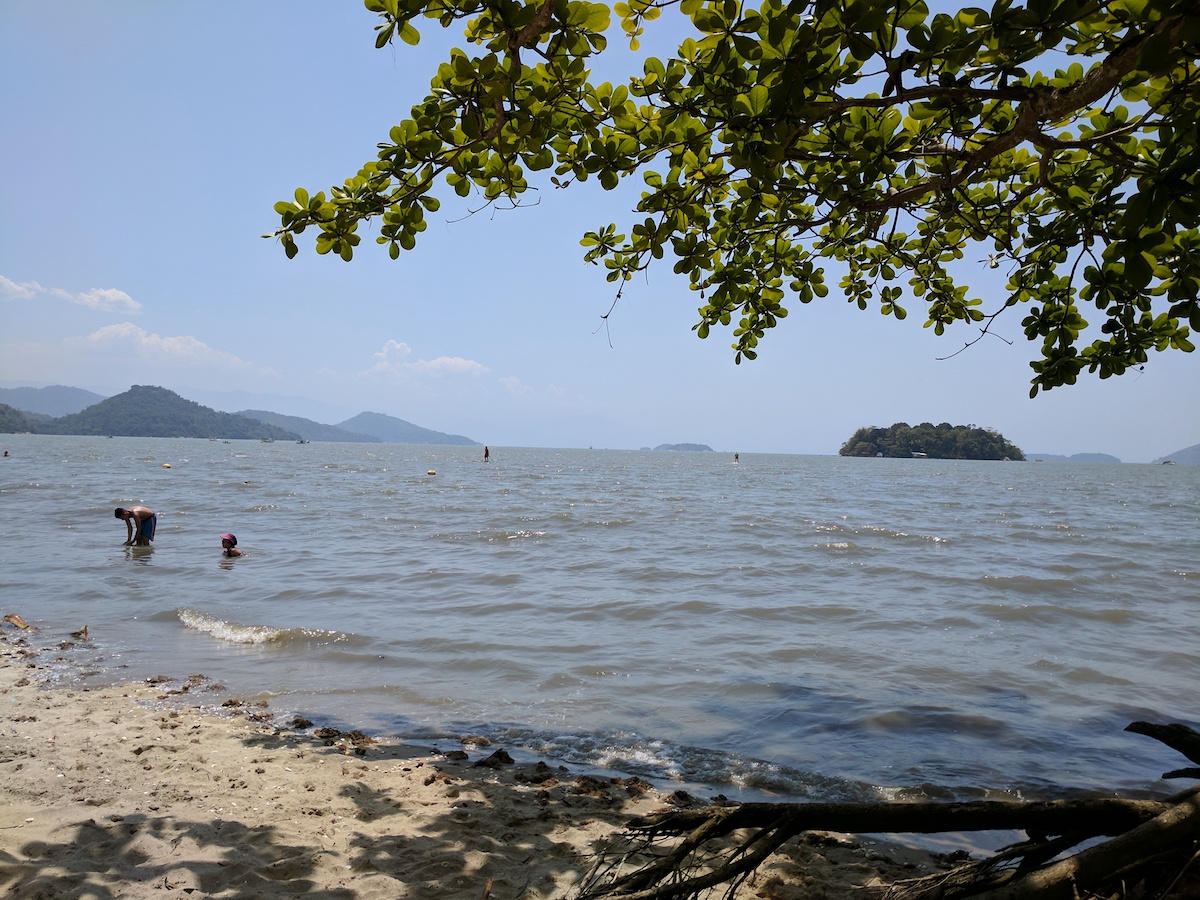 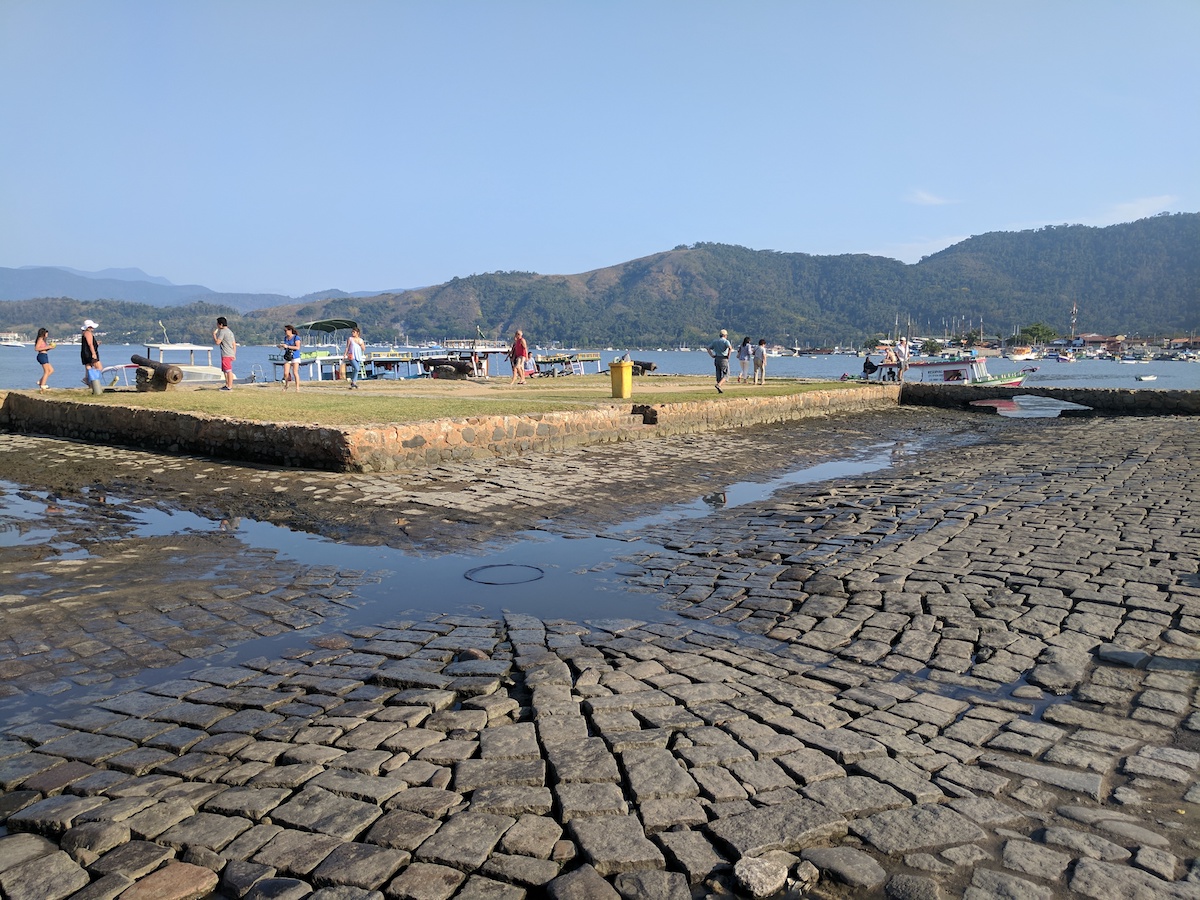 When we decided to wade in and try the water, I had prepared for the brief shock of cool water that I’d felt in Ilha Grande. It did not come. The murky brown water was nearly as warm as bath water. With small waves, I could walk straight about 30 feet with the water only reaching mid-thigh. There was no adjustment period because that water was that warm. The downside to this luxurious lack of cold was the seaweed.

After a couple of hours, we decided to go back shower off, and give the town a second try when we were a little more fresh. We made another loop through, found the same mix of tourists and high-prices, and picked up food to make another dinner on our balcony.

Day 3: We needed to get back to Sao Paulo for our flight to Buenos Aires the next day, and had booked seats on a 10am bus. After having breakfast and enjoying the last bit of time on our great balcony, we suited up with our backpacks and walked 20 minutes to the bus station. We got lucky and the weather had turned a little cooler, otherwise walking with 25 lbs of luggage for 20 minutes would have left us quite hot and sweaty for our nice long bus ride.

We were really pleasantly surprised at the bus stop. Getting tickets was straightforward, there was a clear system for identifying the bags we stored under the bus, the seats were spacious and could recline, and the bus pulled out exactly on time. After my many Megabus trips over the years that did not meet all these criteria, I was feeling good.

That feeling did not last long. Soon it started raining. Then we hit traffic. It was the kind of traffic that leaves you sitting in the same place in Ubatuba for 30 minutes at a time. By the time we reached our first bathroom/food break at a gas station, we were already two hours behind schedule. Luckily we were supposed to arrive in the early afternoon and still had hope to arrive for dinner.

We were wrong again. The traffic continued.

We had packed snacks and got some junk food in lieu of dinner at our second gas station stop but by the time we finally pulled into the bus station in Sao Paulo just after 11:00pm. We were supposed to arrive at 4:00pm. We left Paraty at 10:00am. It was a 13 hour bus ride instead of a six hour one. Luckily we had booked a hotel with a free airport shuttle, so we got a bit of sleep before our 5:00am departure to catch our 7:25am flight. 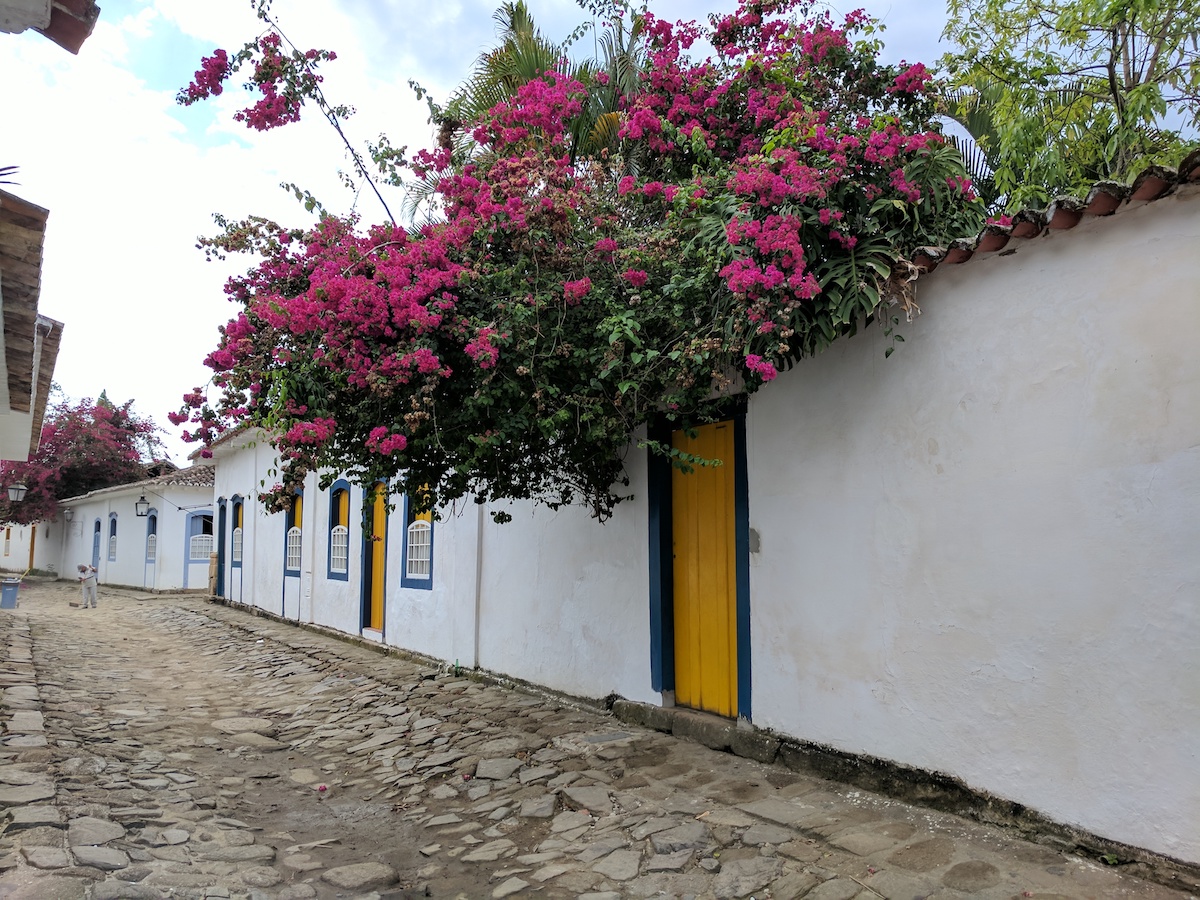 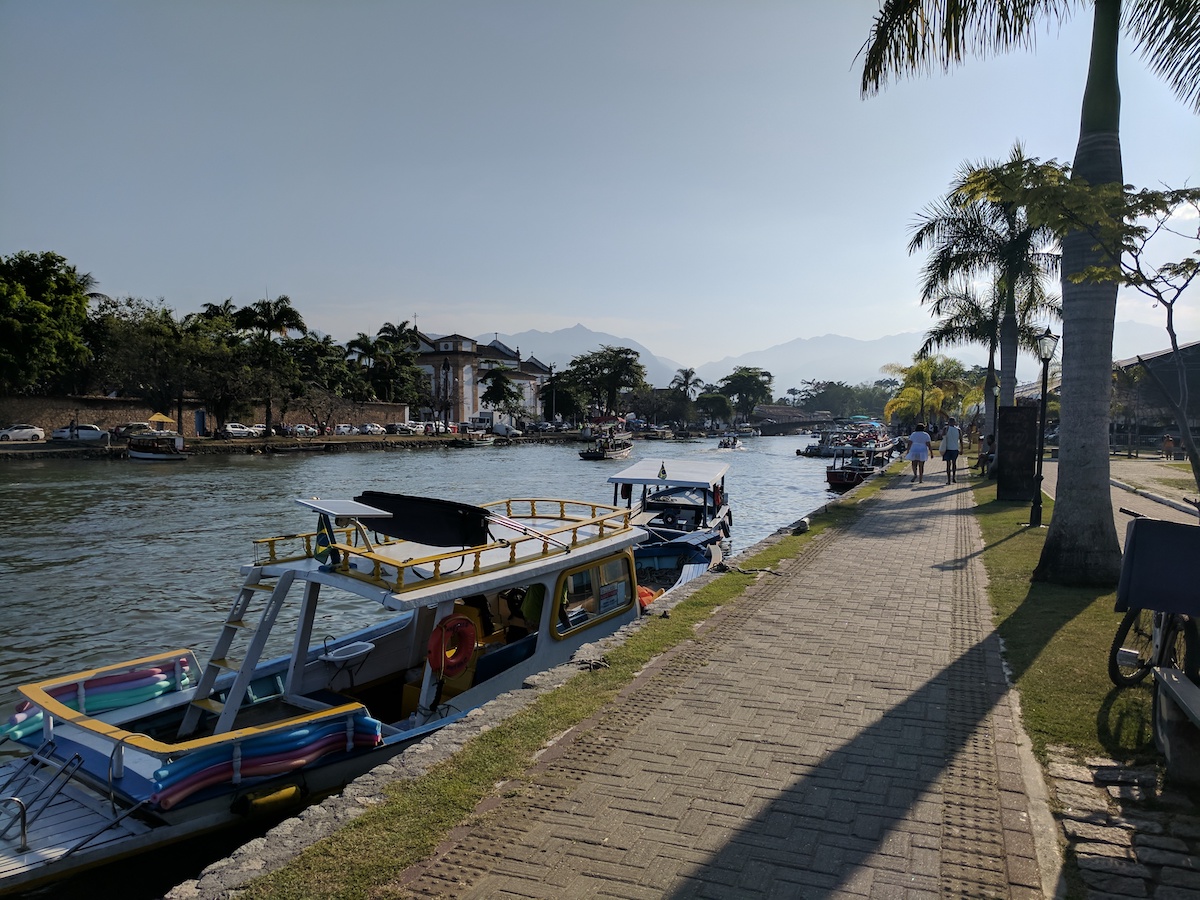 To Sum It Up

Knowing what we know now, we would have stayed in Ilha Grande and then gone back to Rio for a couple more days before flying back to Sao Paulo. Paraty does offer some nice photo opportunities but if you want to enjoy a boat ride, spend time at the beach, or enjoy some peace and quiet; go Ilha Grande instead. It’s true that Ilha Grande can also be a tourist trap of the local variety, especially on weekends, but there is just so much more space you can cover to find a little piece of paradise for yourself.