Moving through the pass between Gouda and Tulbagh, South Africa.

Early on in our trip planning, I became an avid reader of Seat61 - the best resource online about train travel all over the world - and started making a long list of train trips that sounded like they would be fun additions to our trip. At the very top of that list was taking the Premier Classe train from Cape Town to Johannesburg - a 26+ hour journey across the Great Karoo.

The Premier Classe is the perfect middle-ground in terms of options for trains across South Africa - much more luxurious and relaxed than the Shosholoza Meyl tourist class train would have been and less stuffy (and less outrageously expensive) than the Blue Train.

We had a wonderful time aboard. There was great scenery, a relaxed atmosphere, and only a couple of minor hiccups in the service.

We arrived at Cape Town Station a little after 8:00am and joined a half-full lounge of fellow travelers enjoying some tea and coffee before boarding the train. The lounge itself was convenient, well-staffed, and has a private entrance directly from Old Marine Drive, where they had laid out a welcoming red carpet.

After receiving our cabin assignments we were led out to the train itself, snapped some quick photos, and filed aboard. Most folks had their luggage taken to their rooms by the staff, but we kept a close hold on our backpacks and no one minded.

The train pulled out right on time at 9:05am and we all filed into the lounge car to meet the staff and get a short briefing on our schedule for the next day. Our trip had only 24 guests aboard a train that can travel 60, so we never felt squeezed for space and met every other passenger on our train. We also lucked out, in that they started running a brand new train since we booked our tickets, so everything felt very fresh and clean onboard. 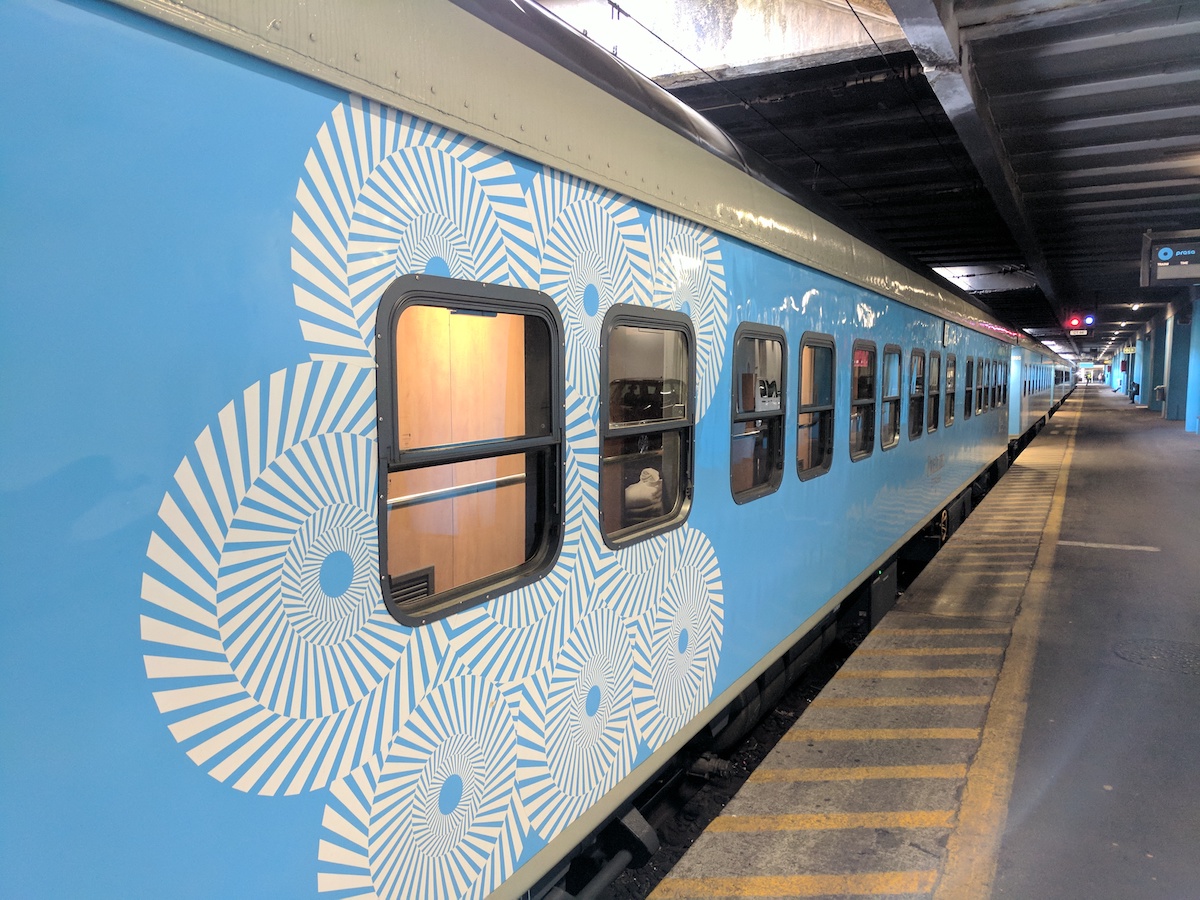 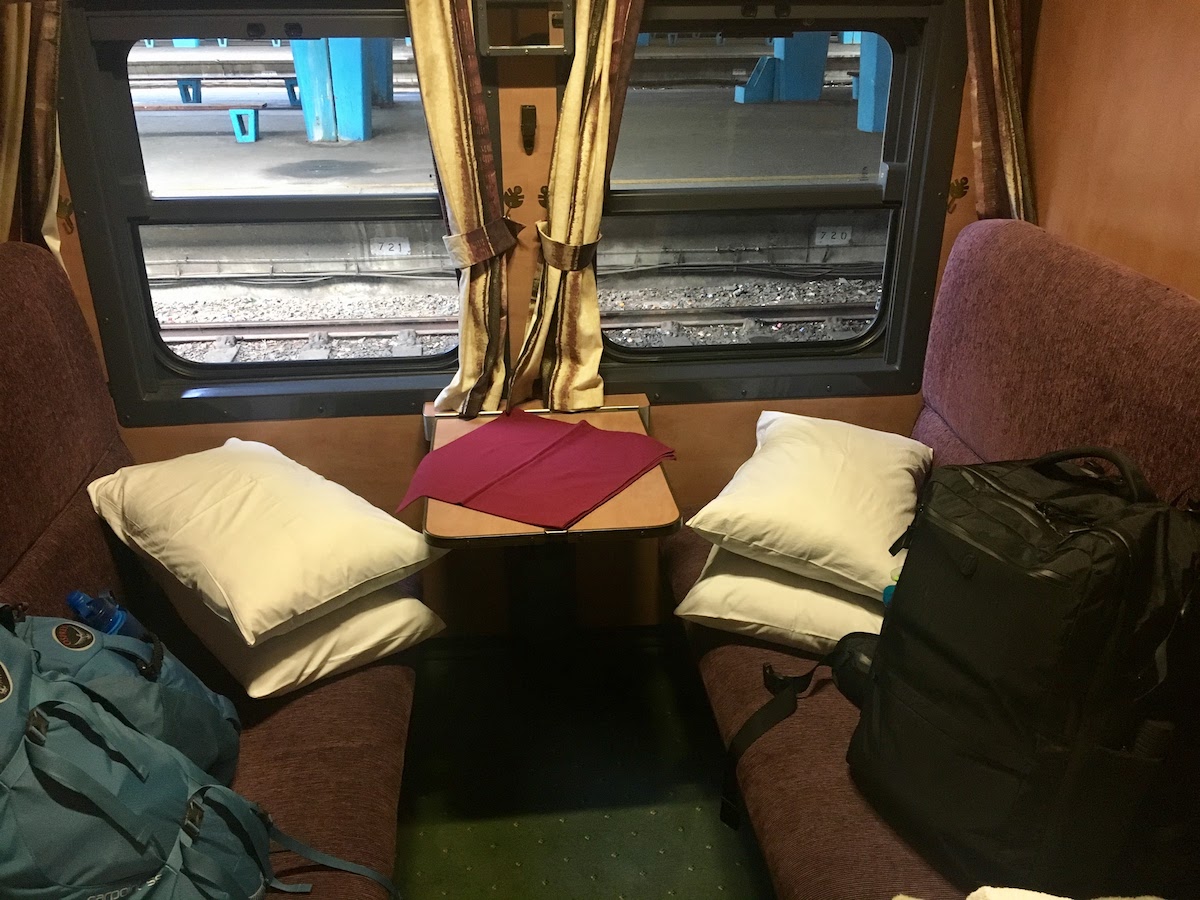 Our first day aboard was fantastic, and easily one of the best days of our trip so far. We had great views, were pretty much constantly being fed, and all-around felt very taken care of.

We kicked off the morning with a free champagne toast as we pulled out of Cape Town Station, along with some small bites of biltong (South African jerky), potato chips, and nuts. We were then served morning tea and sandwich quarters to make sure we were well held over until lunch. 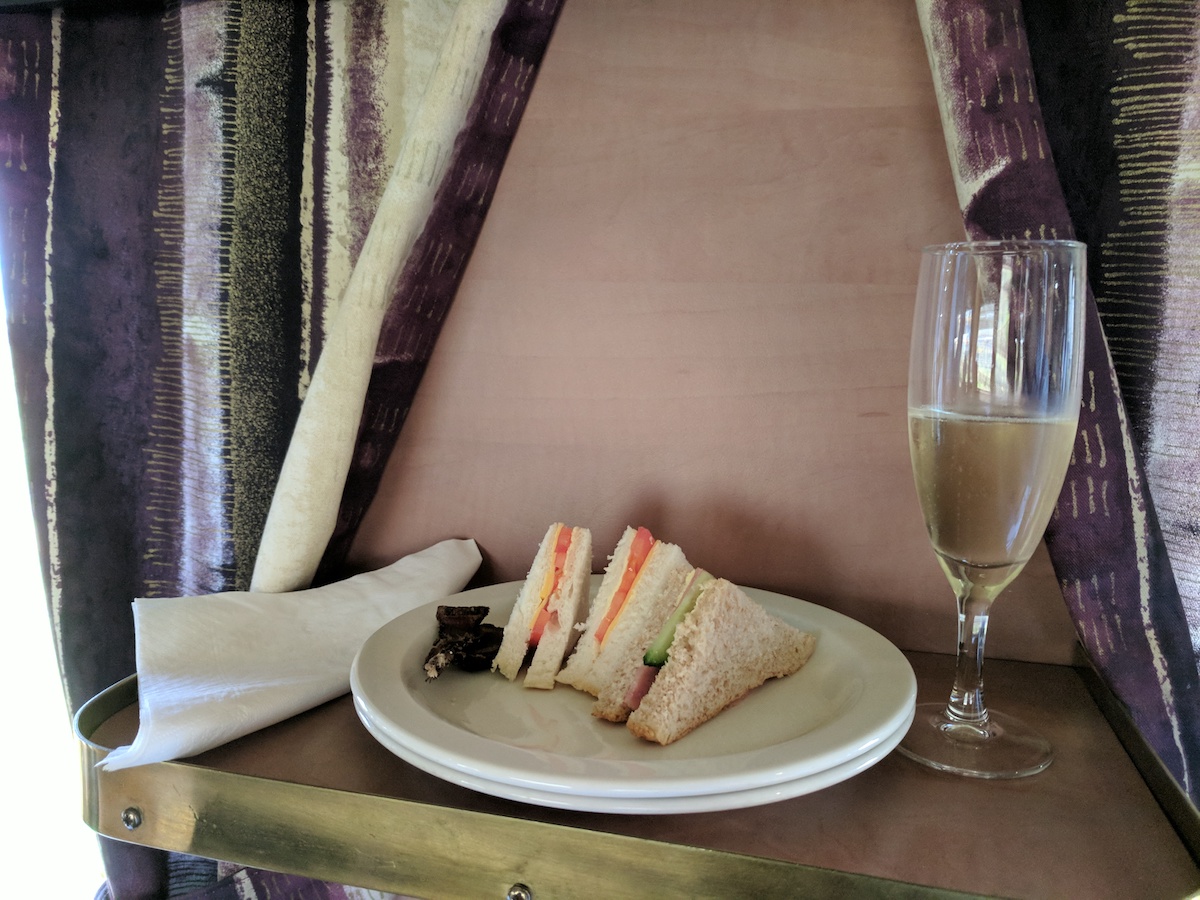 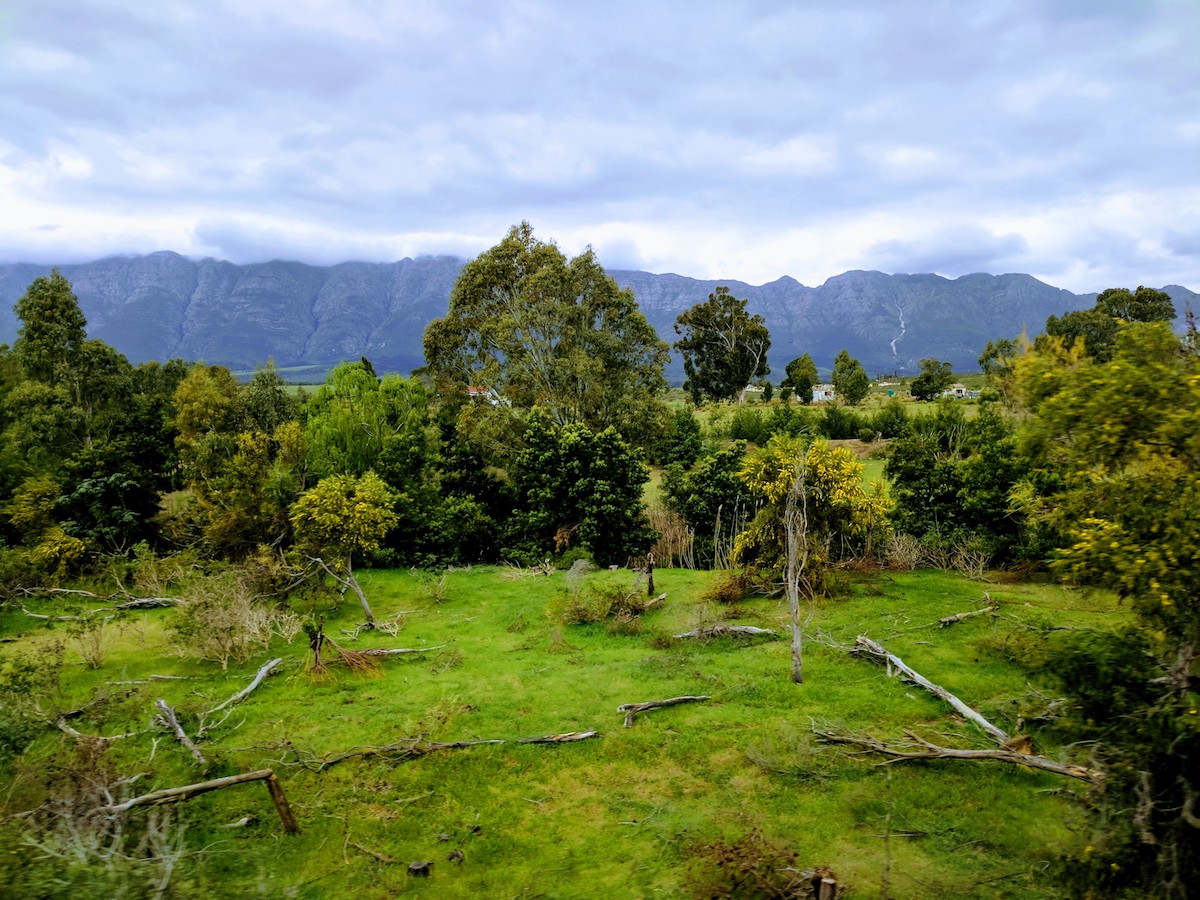 We almost immediately started running behind schedule due to congestion on the lines as we made our way out of Cape Town, but weren’t at all worried about our exact arrival time and barely noticed the many short stops.

As we wound through the mountains east of Cape Town, we moved to the dining car for the first time, sitting at our assigned table (they sometimes pair couples together on 4-tops, but didn’t on our journey since they had such a light crowd), and enjoyed a 3-course lunch of salmon, chicken and vegetables, and cheesecake. As with everything we ate on the train, it was reasonably good but nothing special.

In the late afternoon, we settled again in the lounge car to enjoy more tea, this time with choice of carrot or chocolate cake, and to get to know the other passengers some more. The group overall was a nice mix of South Africans and international tourists, including one woman who is a regular on the train since she has family in both cities and doesn’t like to fly. 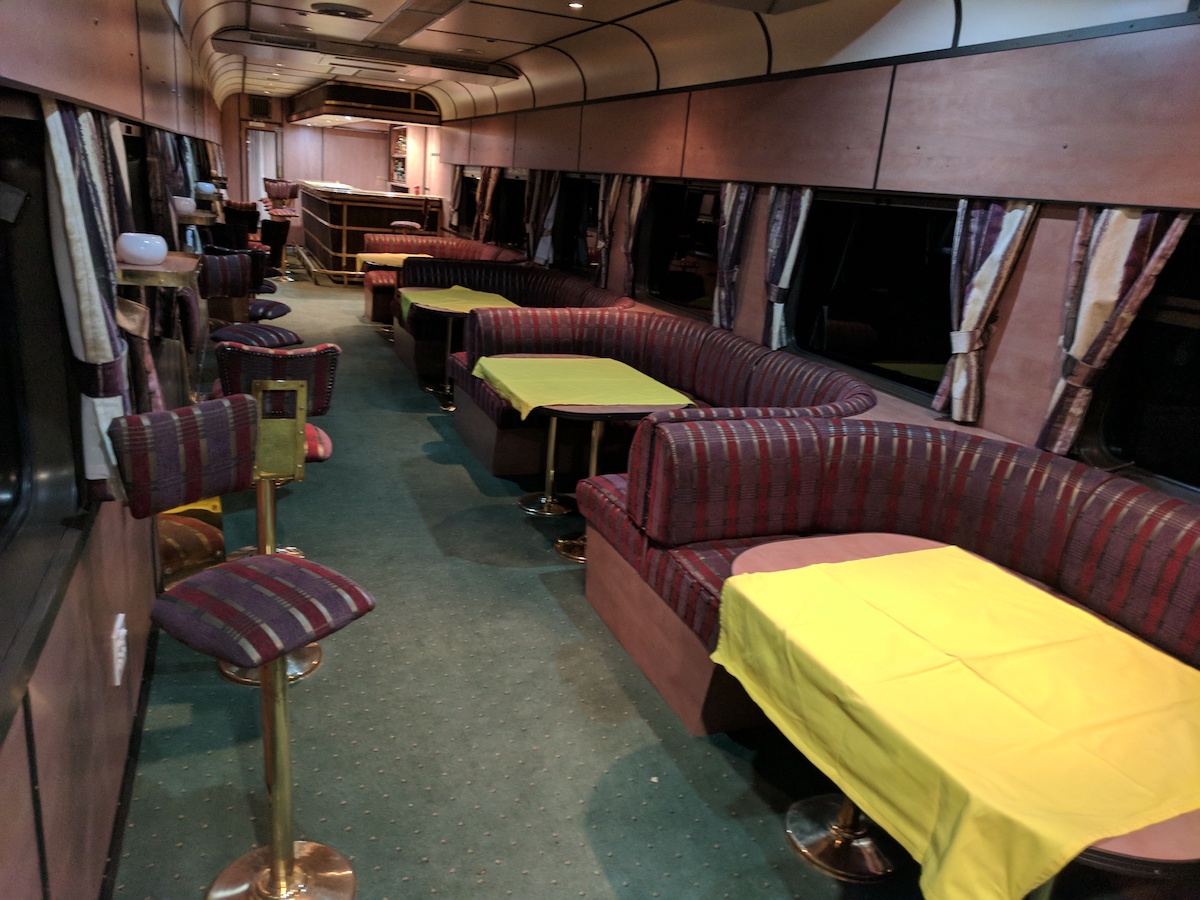 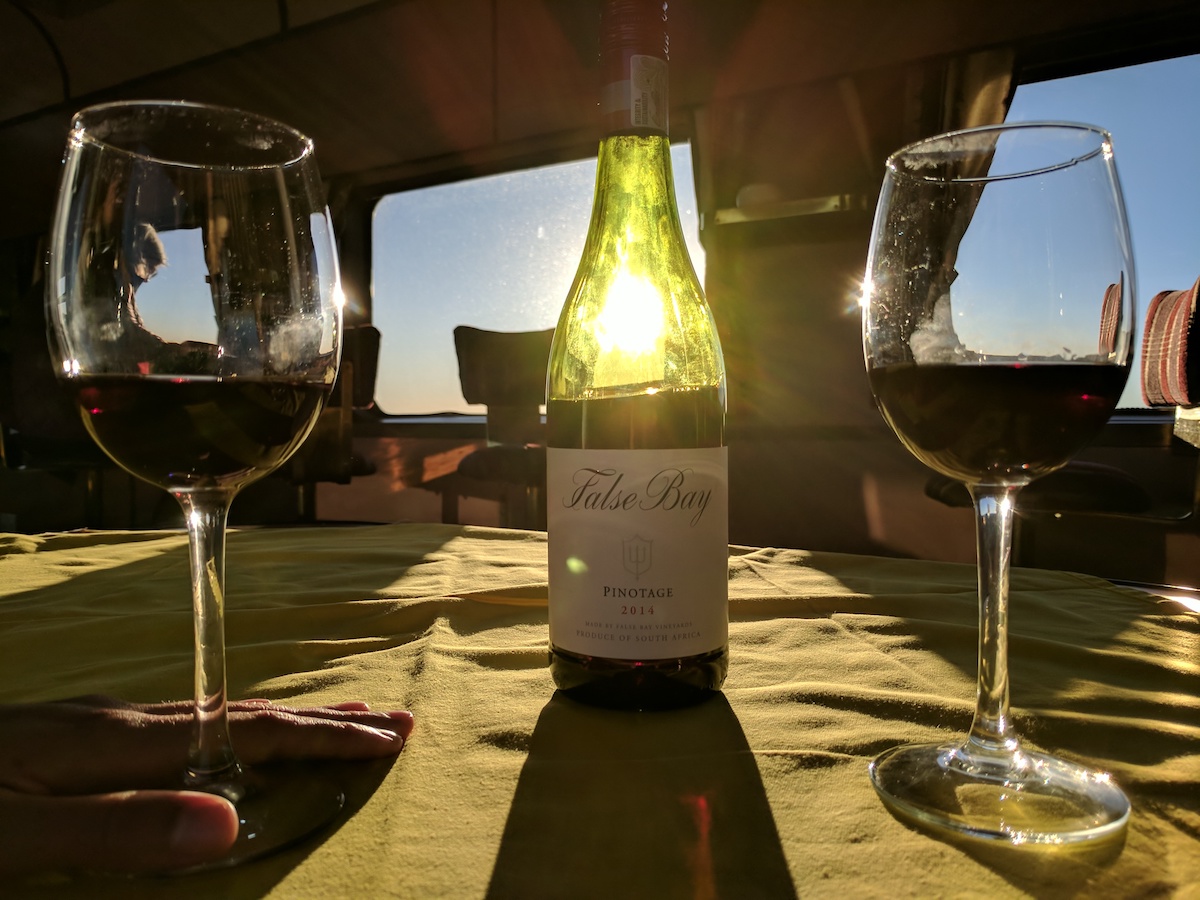 We treated ourselves to a nice bottle of red wine from the Stellenbosch region we had just travelled through (at 6 USD this wasn’t much of a splurge) and watched the desert scroll by until we reached Beaufort West Station for a quick stop to change the engines on our train. After stretching our legs in the surprisingly-cool air, we took the rest of our wine down to the dining car for our big dinner.

Similar to lunch, dinner was a 5-course meal of cream-of-vegetable soup, hake, lamb with pumpkin and cheesy cauliflower, chocolate soufflé, and a cheese plate. The hake and pumpkin were the standouts of the meal, but it was filling and nothing to complain about. I can’t think of too many meals as relaxing as finishing a bottle of wine while watching the world slowly rumble by, and knowing that there’s nothing to do but head back to your cabin and sleep until morning light.

While we were in the dining car, our cabin had been made up by our car’s attendant and was ready for us to have a cozy and comfortable night. After taking two redeye economy flights in a row on our way from Maui to Cape Town, this was truly a luxurious way to sleep while traveling!

While the first day was full of warmth, food, relaxation, and great scenery; the second day was pretty much the opposite. It was an unfortunate end to the great journey that left us confused at the goals of the service.

We woke up in a freezing compartment, which ended up being true of the whole train. While the cabins do have air conditioning capability, they apparently don’t have heating. The early morning coffee/tea in your cabin that was promised in the schedule we received onboard would have been a great way to warm up, but unfortunately was never offered to us.

We joined other passengers - blankets to bundle up in and all - in the lounge car and tried to keep the doors closed as much as possible to keep at least a little bit of heat in. Unfortunately breakfast was only available in the very-cold dining car, so we quickly ate our way through our yogurt & granola, eggs, bacon, sausage, and toast before scampering back to our cabin to warm up under more blankets.

Even more confusing was that after breakfast, the staff seemed to all just disappear. We joined the other passengers back in the lounge car later in the morning for the promised tea, which never materialized. After an hour of waiting some other passengers finally tracked down one staff member to bring some coffee around, and we were told there were no more snacks to be had.

With about 30 minutes to go until our scheduled arrival we were finally given an update on our status - and told that we would arrive about 40 minutes late. While they sometimes provide a Day Two Lunch when delays are longer, this apparently didn’t merit it and we went back to our cabin to pack up. Unfortunately that estimate turned out to be very optimistic, and we pulled into Park Station in Johannesburg almost exactly 2 hours late - and very hungry!

Unfortunately, the Premier Classe train was a very inconsistent experience. The first day was amazing and while going to sleep the first night I was wishing it was a 3-day trip instead of the 2-day trip. The carelessness of the staff on the second day was a big disappointment after that, most of all because of how easy it would be to have made us happier by just sticking to the schedule of services they promised (and turning on some heat!).

We’re happy that we did it, but probably wouldn’t do it a second time if we’re in South Africa anytime soon. There’s probably no better way to see the countryside, especially if you don’t have anything time sensitive on the other side and are able to set your expectation low about the service onboard. 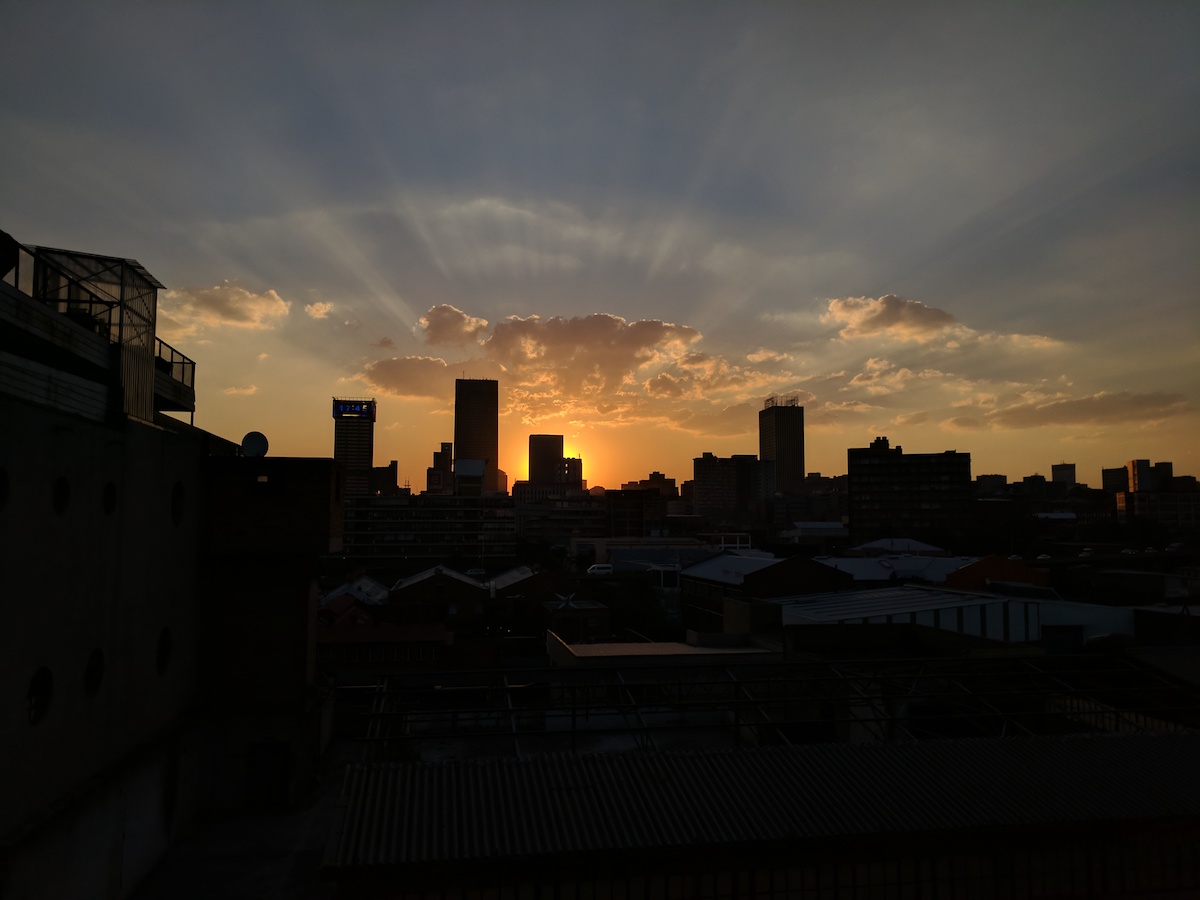 The sunset our first evening in Johannesburg.