The view of the port from the hills.

Valparaíso is a port city that at one point was a wealthy and sophisticated hub in Chile and South America. With the development of the Panama Canal, the fate of this port spiraled and left it seemingly forgotten until UNESCO named it a world heritage site.

The remnants of it’s once great position are still visible on Plaza Sotomayor and the original stock exchange of Chile but now those artifacts of the past are largely outdone by the maze of houses, shops, and restaurants that are cluttered together on the hillsides. They are brightly colored and many are covered in murals. You can see more about all the many varieties of street art in Valparaíso in this post. This is the character that jumps out at visitors and drives tourism to this unique coastal city.

While the street art is often beautiful and the views of this jumbled pile of color can be pretty spectacular on a sunny day, the city is also pretty gritty. Part of the fall from prominence and the lack of urban planning means that garbage disposal seems to be irregular or completely fails to reach some of the more twisty-turny streets. While we weren’t warned in advance, apparently everyone who visits is told about the crime in Valpo. We didn’t go out much late at night and so, as with most places, you should be careful with valuables and be cautious in areas you’re unfamiliar but during the day we didn’t have any issues. 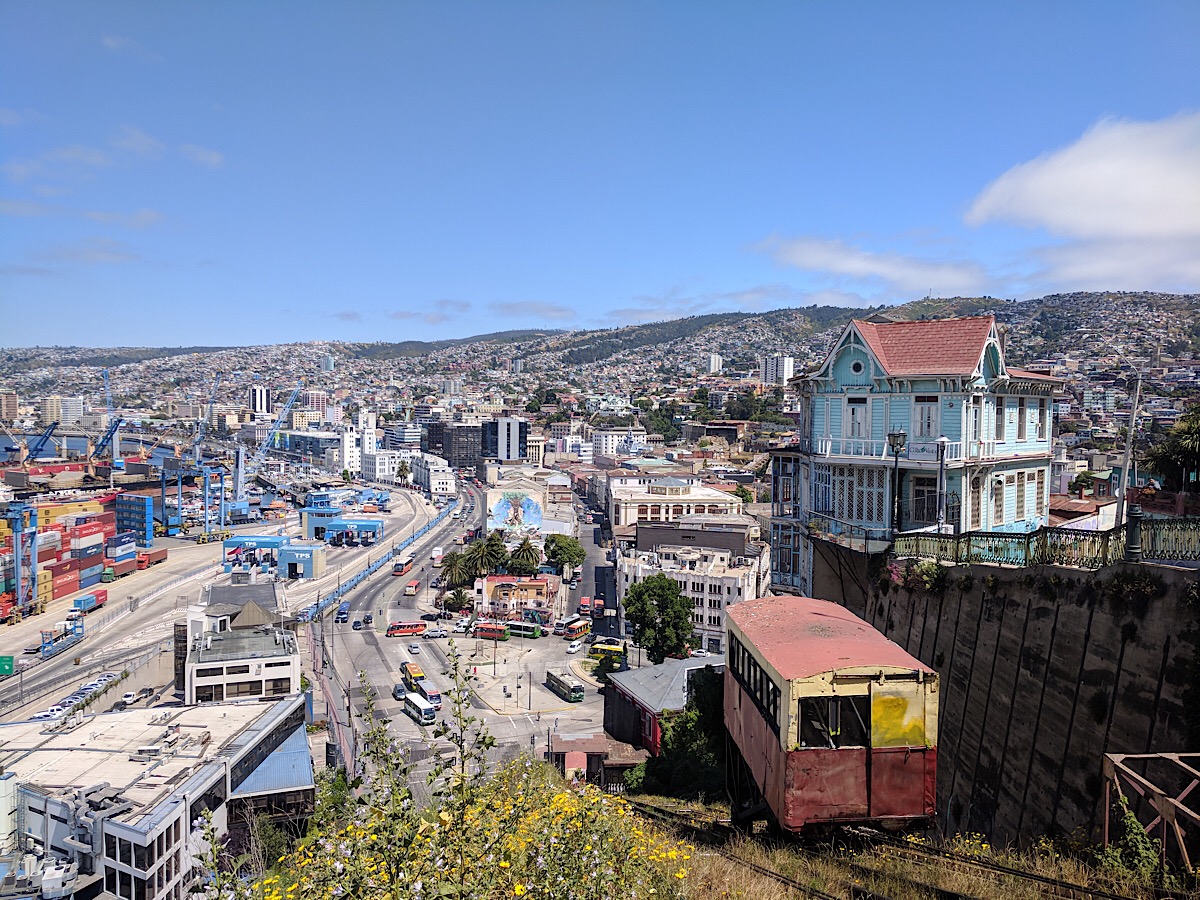 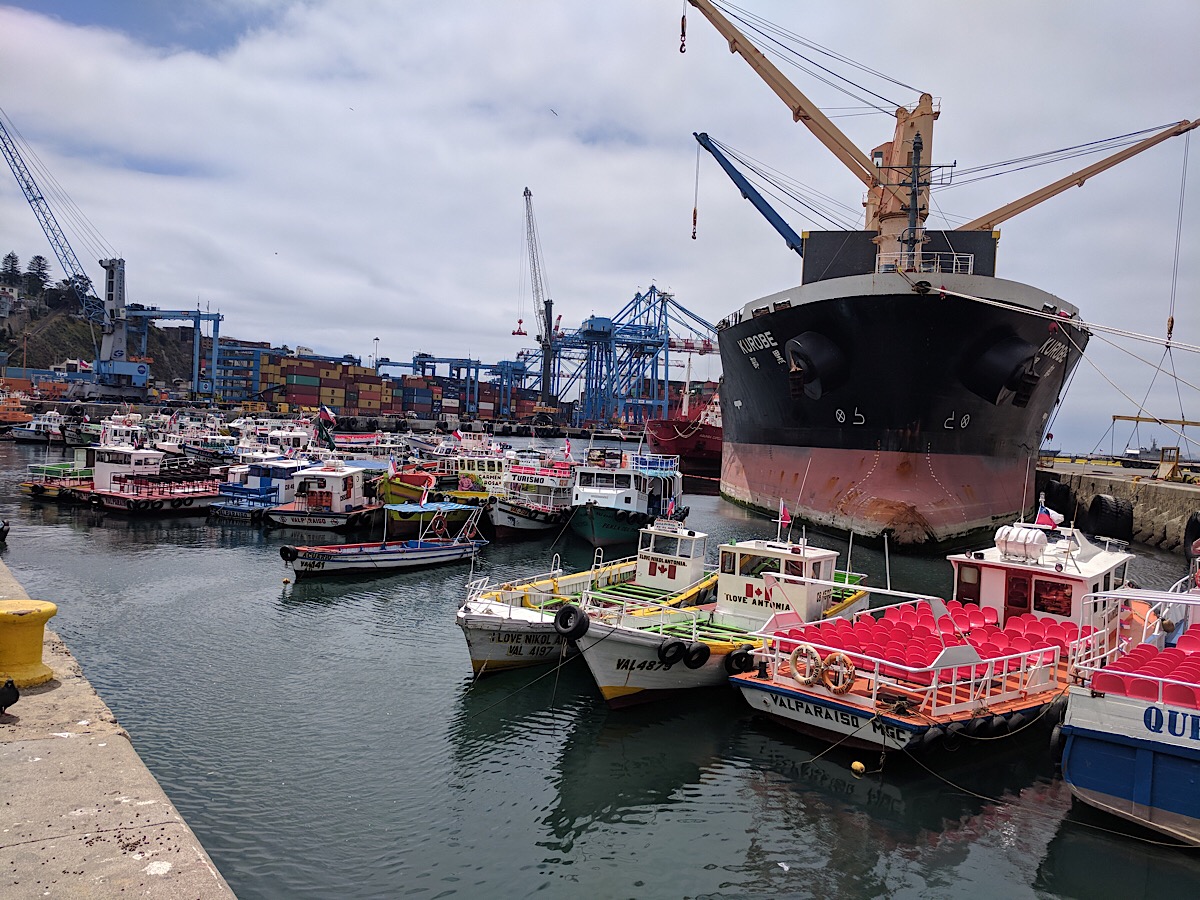 Many tourists visiting Santiago, or at least stopping in Santiago on their way to the Atacama desert or to Patagonia, make a day trip to Valparaíso. It’s pretty easy. Buses run regularly and the drive only takes a couple of hours. We decided to spend 4 days here though, and I think fewer than 3 does not do justice to someone wanting to experience the city.

Even with four days, we only saw 5-6 cerros (hills or mounts) of the 42+ that make-up the city. Most people who visit for just one day only get to see the two that have largely been taken over by the tourism industry her: Cerro Alegre and Cerro Concepción. These hills are lovely but are covered in hostels, shops, restaurants, and street vendors that cater more to tourists than locals. As these businesses moved in, many locals could no longer afford to stay and moved further from the port.

Other than exploring the streets, taking in the street art, dodging the many stray dogs and cats, and attempting to overlook the less than desirable smells that fill the air through most of the city; we took on 3 big activites. First was a 5-hour walking tour, then a day of horseback riding, and finally a Chilean Cuisine cooking class.

Walking Tour: We’ve become complete converts to the “tours for tips” walking tours that have been available in almost all of the cities we’ve visited so far. (I comfort myself with the fact that it’s not the double decker red tour bus, I still have a line I’m not willing to cross.) The tour guide in Valpo (Danny) was probably the most thorough of any guide we’ve been with so far. The tour advertised for 3 hours actually took almost 5 hours and that was less than his average since we were a small group. Luckily, we weren’t trying to get back to catch a bus back to Santiago and didn’t have other plans for the afternoon beyond wandering around. 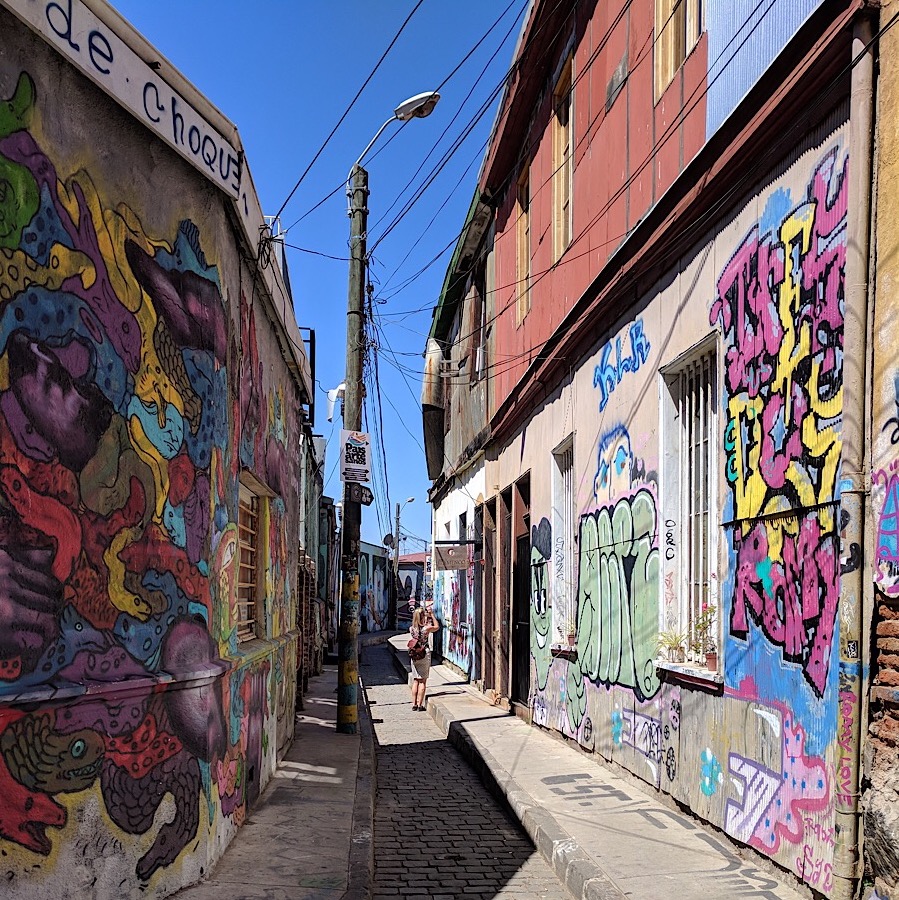 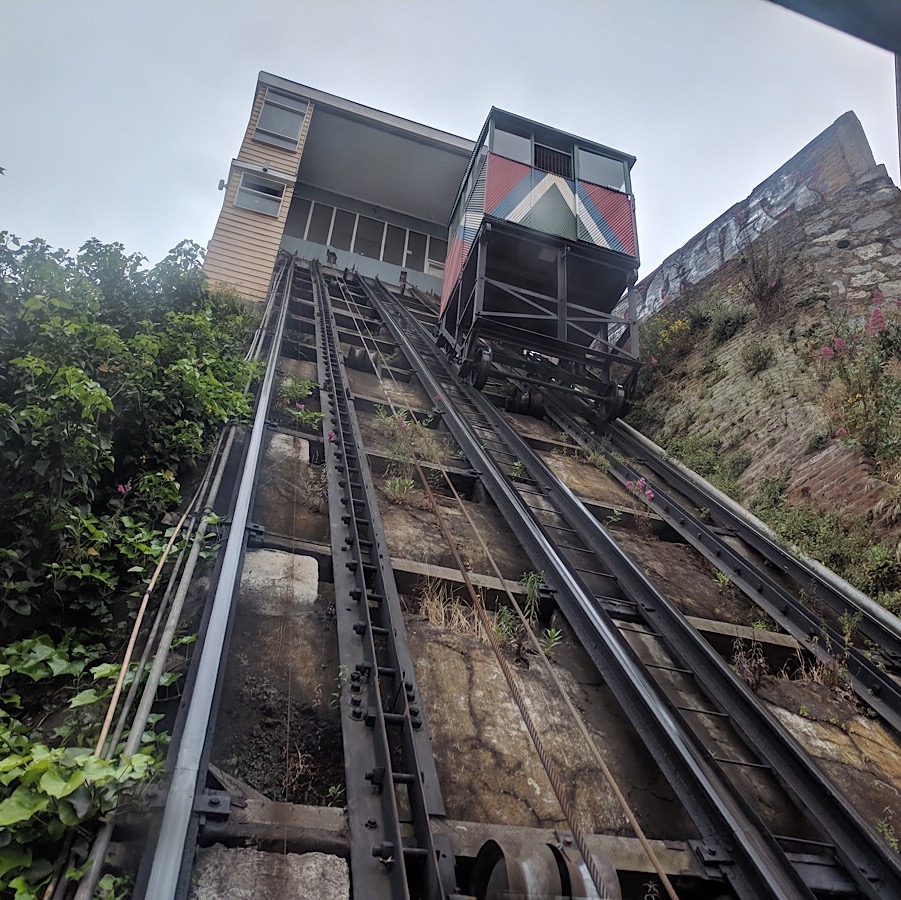 The tour only covered two of the 42 hills (Alegre and Concepción), which is where most people visit, and the port. Still, getting to hear more about what it is like to live in Valpo from someone born and raised here, about the politics, history, and some of the social challenges they are facing made the tour a good way to spend the time. We even stopped for what must have been at least our 300th empanada in South America.

Horseback Riding: This was actually outside of Valpo but was well worth the trip on the metro. We went with a German expat that left his stressful job in Germany to run his own farm/hostel/tour company in Chile. Unfortunately, he may be heading back to Germany after this summer so future visitors may miss out. 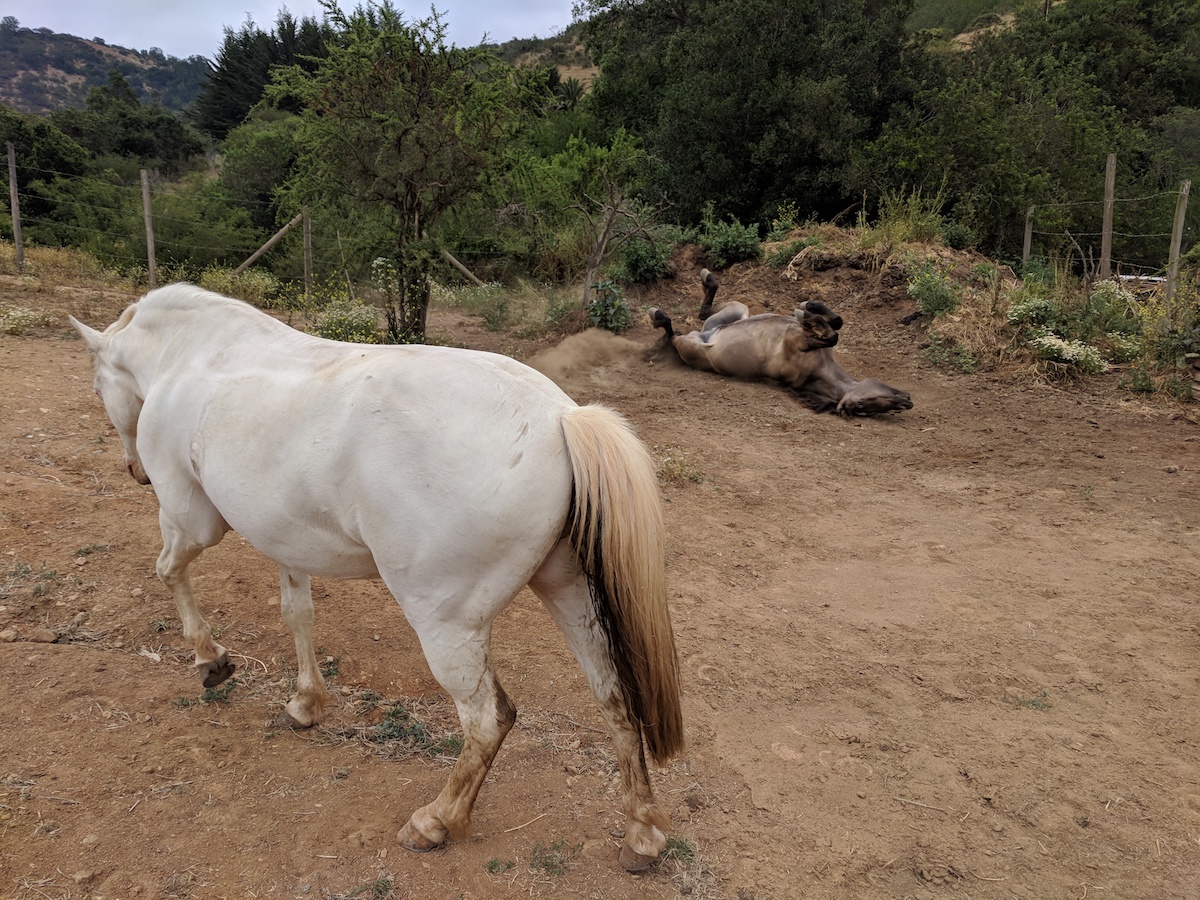 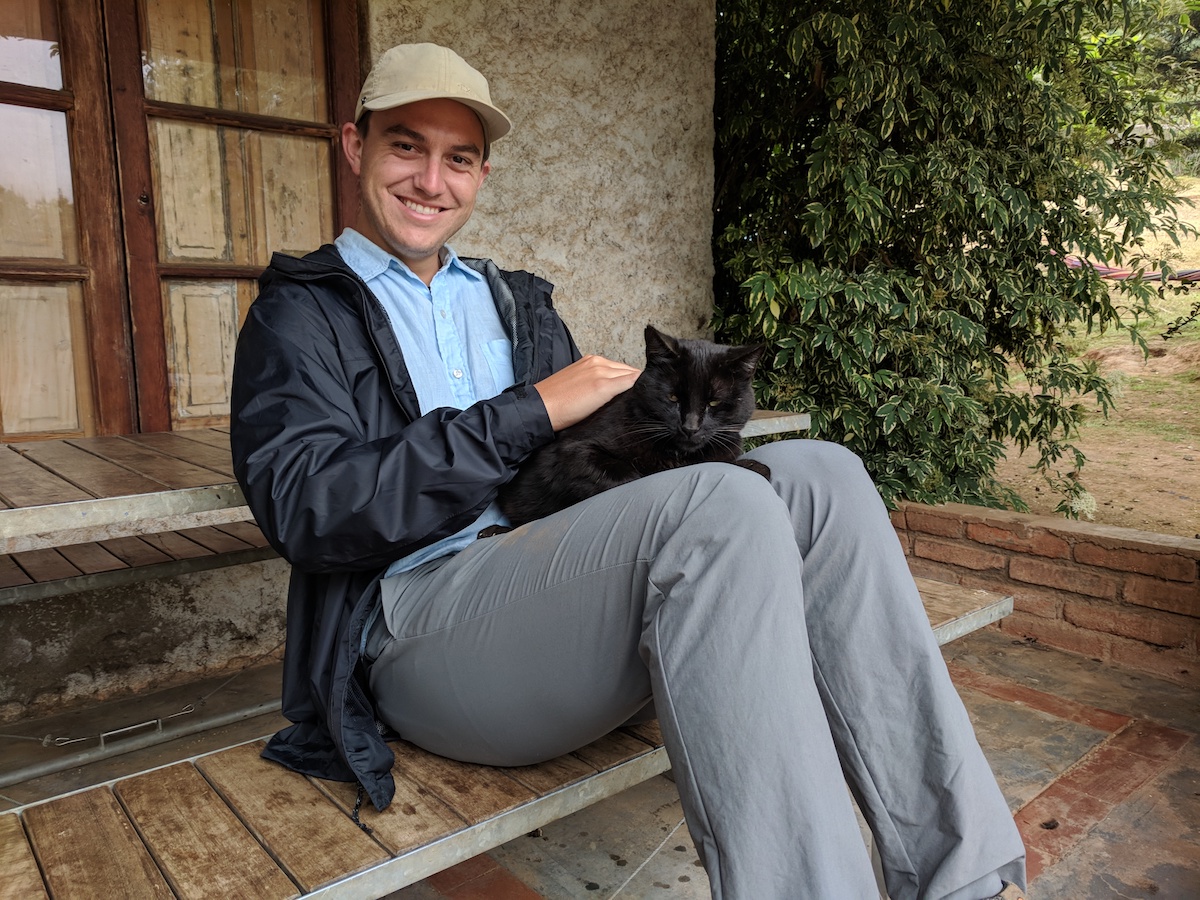 When we arrived, Kai, the owner of the farm, was confused about why the horses weren’t ready for us. He runs the farm with the help of two volunteers from Germany who work for a few months in exchange for room and board. They normally have them ready to go when he arrives with guests. Apparently the horses were being a little cheeky and hiding very successfully in the dense hillside fog. We enjoyed some coffee and played with the dog and cat that came to befriend us while everyone else went in search of our horses. In the end they were successful, though one horse almost managed to evade capture by circling a large tree just out of sight as Kai circled after it trying to follow the sound of it’s hooves. Like I said, cheeky horses.

I have never really been horseback riding. I rode a camel in Kenya a few years ago but strangely that experience doesn’t really translate to horses. Luckily the horses we took out for the 2.5-3 hours trail ride were so well trained that my lack of skill wasn’t a problem.

By the end, Nate felt confident enough to gallop a little with his horse. My horse did a little galloping too, though I wouldn’t say I was very comfortable with it.

We rode through hills that were covered in vegetation, even some cactuses that had flowered. There were a few steep portions of the trail but overall it was easy riding. I had only agreed to do the shortest of the outings for fear I would either hate it or would be uncomfortable but afterwards I think I could have managed one of the half-day tours… maybe next time.

To protect our cameras, Kai asked that we let him take the photos of our day. Once we get his photos, we’ll have more to share here.

Cooking Class: Our final activity in Valpo was a Chilean cooking class. We got very lucky and the 4 other people who were supposed to take the class with us were no-shows and so we ended up with a private class. Granted, that meant fewer people to chat with but it also meant more hands-on cooking time. We started the class by picking what dishes we wanted to make out of a selection that were offered. We chose a ceviche to start, charquican as the main dish, and alfaores for dessert. We also made empanadas, pebre, and pisco sours. 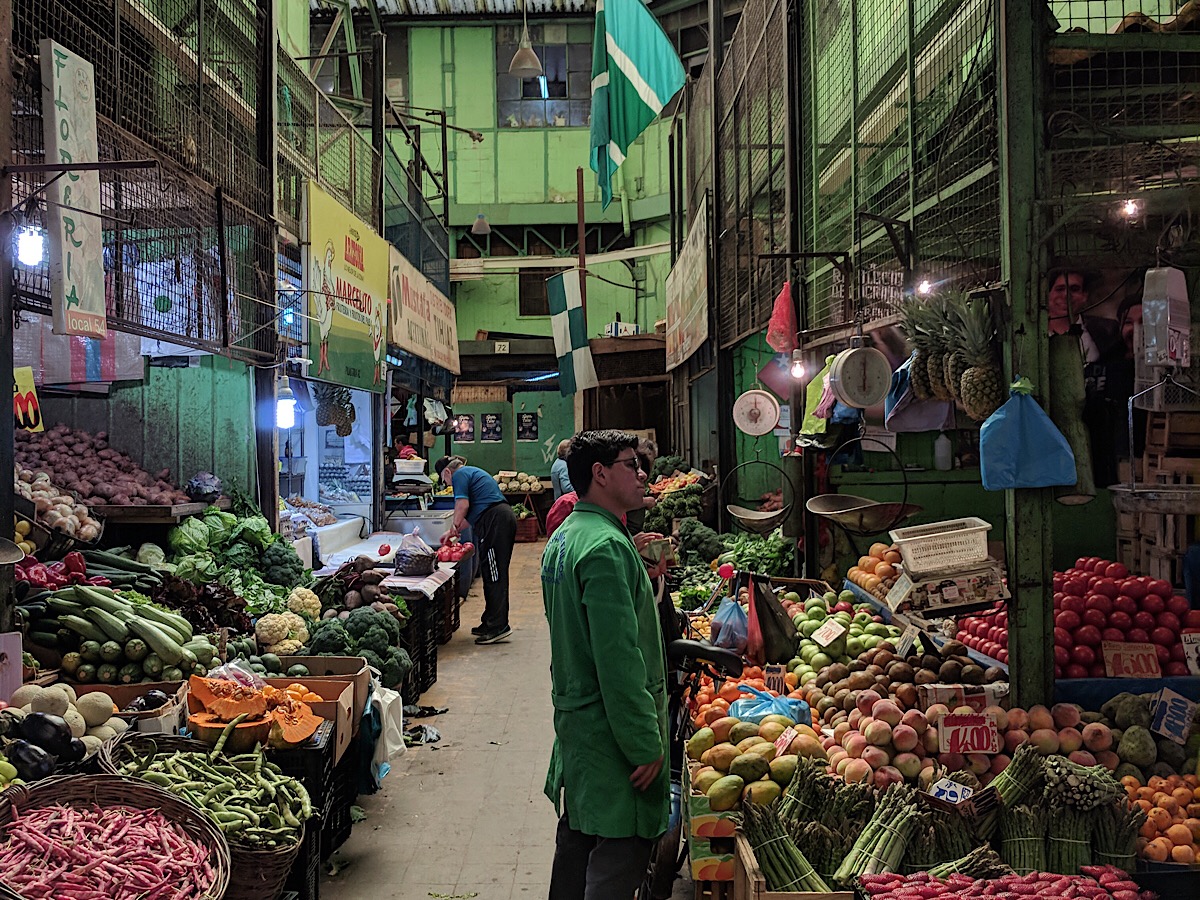 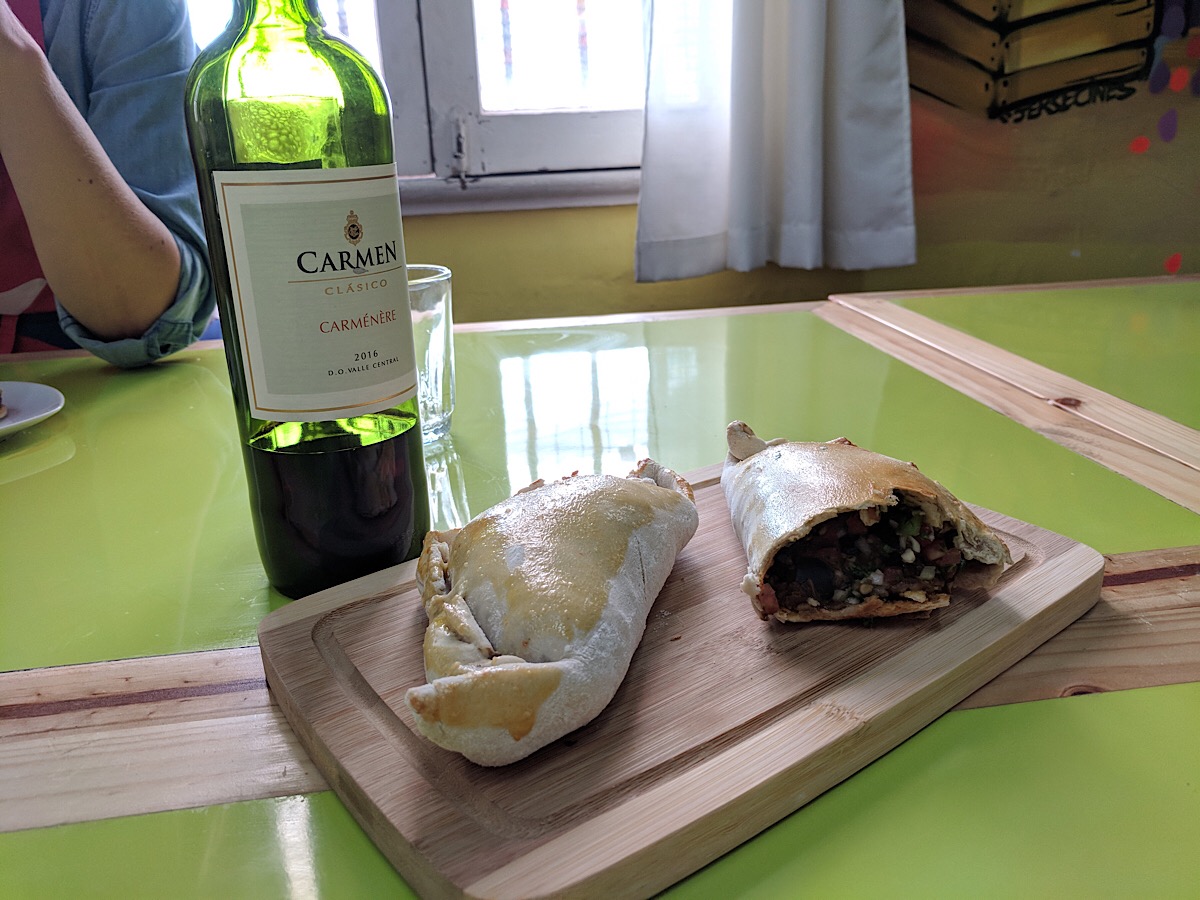 To start the class, we had to collect all of the ingredients from local markets. These were very similar, though much smaller, to the ones we visited in Santiago. Like in Santiago, we stood out. Apparently not only my blond hair but even Nate’s brown hair is unique enough to cause a stir. We did at least figure out that it’s likely his brown hair and not something about the way he speaks Spanish that have made so many people in Chile think Nate is from Brazil. We also were serenaded with renditions of “Despacito”. I consider all of this just to be preparation for our time in Asia. If we stand out here, how much more so there?

After stops at the fish market, the vegetable market, the butcher, and a bakery we were ready to head back to the kitchen/classroom. Our transportation for the day was public buses, which we had been interested in since we arrived. There are TONS of buses in Valpo. What we hadn’t realized is that they are not actually public buses but are generally family-owned. So, there are actually many buses competing on the same routes. This also means that the buses will often sit waiting to fill up before moving on so that they can ensure they make enough money. It also apparently means, though we didn’t see it, that they can customize their bus however they want. This includes the late-night buses shifting into party bus mode with lights, decorations, and techno music. Our bus rides were very uneventful though. 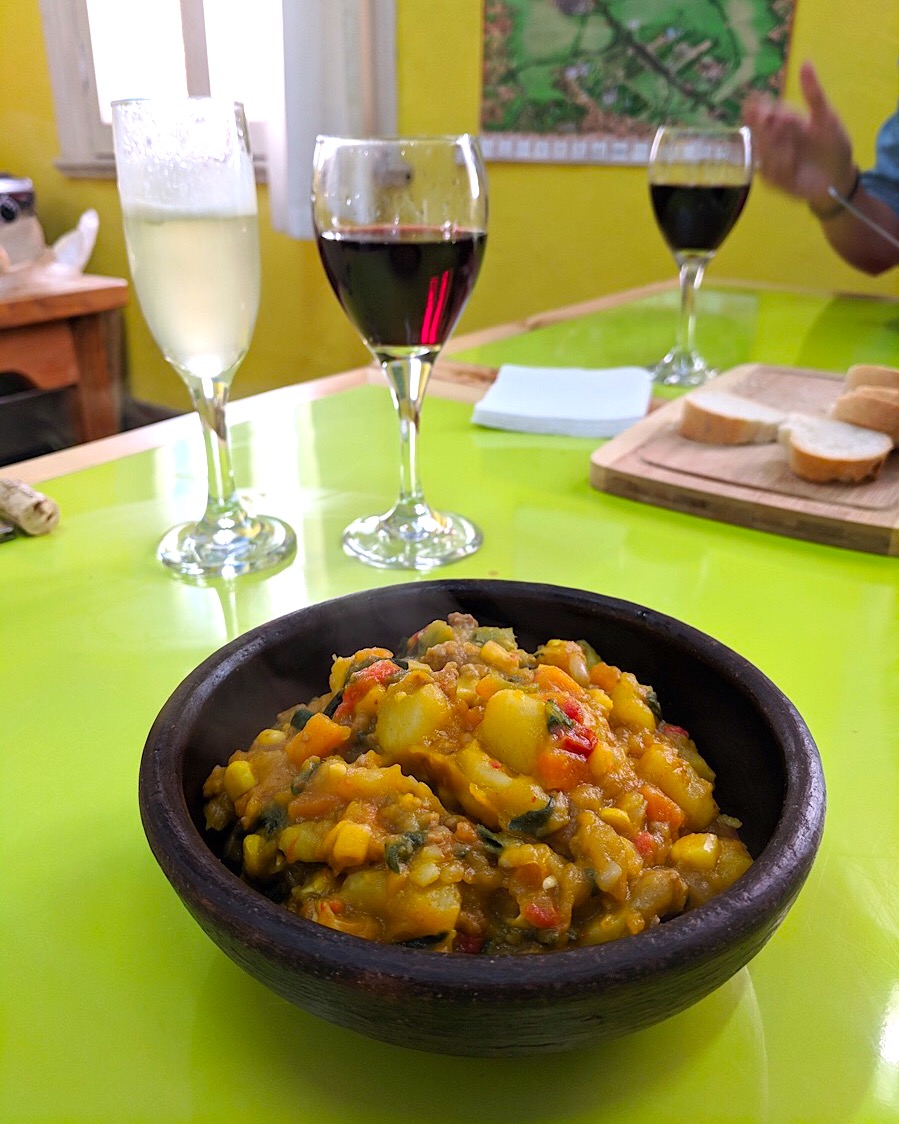 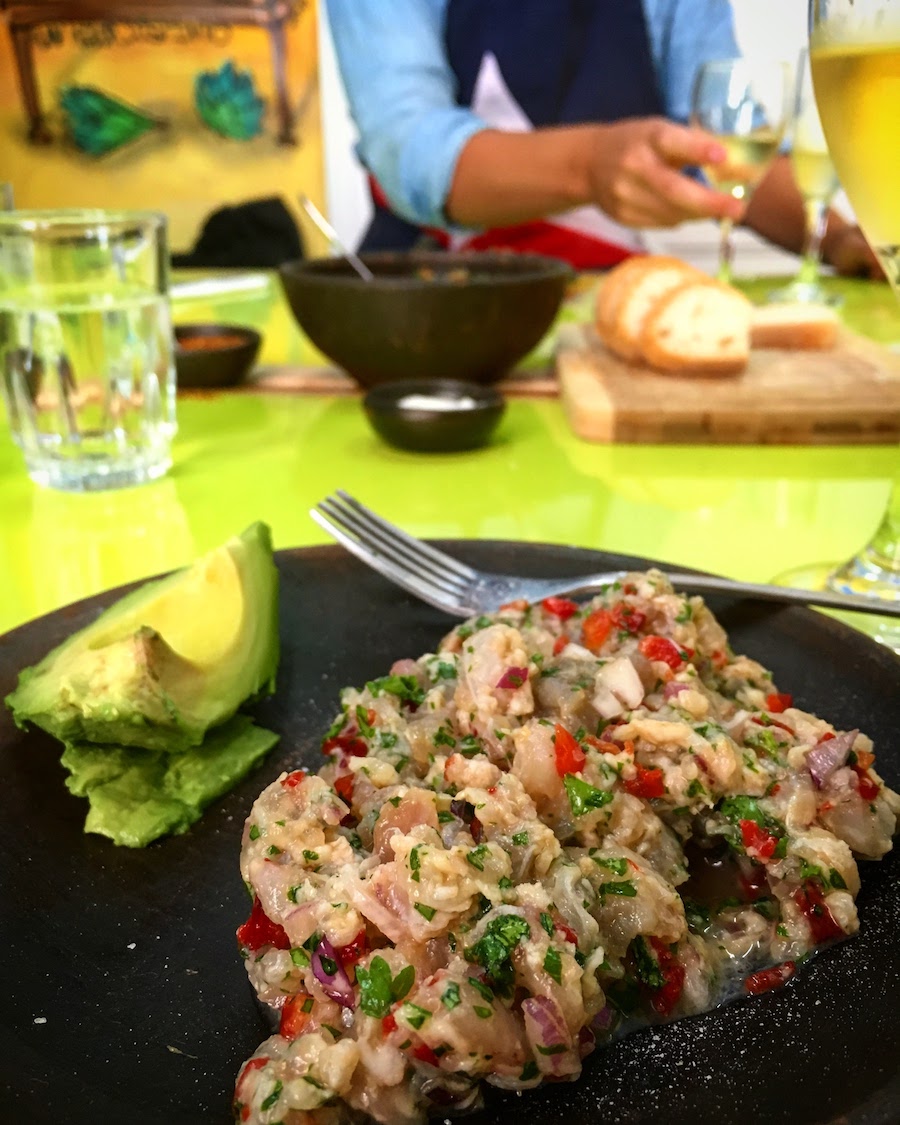 Back in class, we chopped, cooked, stirred, and shook our way to a delicious meal. The instructor was great and sent us a collection of all the Chilean recipes we made plus several more that we could try on our own. So, friends and family, a Chilean dinner party is coming to a place near you soon after this adventure is over.

Though Valparaíso is much smaller than Santiago and quieter in many ways, we actually felt like there was more to do.

« Easter Island: 6 Days of Ahu Moai
The Street Art of Valparaíso: Is it more than just graffiti? »