We deliberated a lot about whether or not we wanted to go to Ha Long Bay. We had heard that it was crowded and pretty dirty these days as tourism had boomed to irresponsible levels but that it was also gorgeous and completely worth going. Torn, we eventually decided to see one of the less famous bays nearby and opted for a trip to Cat Ba, one of 4 inhabited islands out of over 1,000 in the bays off the Haiphong coast. From there, we would be able to see Lan Ha Bay, which borders Ha Long Bay to the south. We would still get to see the limestone islands and beautiful green water but at a fraction of the cost and hopefully with fewer of our fellow tourists.

Getting to Cat Ba

There are many services to take tourists back and forth from Hanoi to Cat Ba. To get there, we decided to take the public train to Haiphong and then a hydrofoil boat straight to Cat Ba Town, where we would be staying. Many of the other services take you to the port on the far side of the island and then you have to take a crowded and undependable public bus or pay for a taxi across the island. 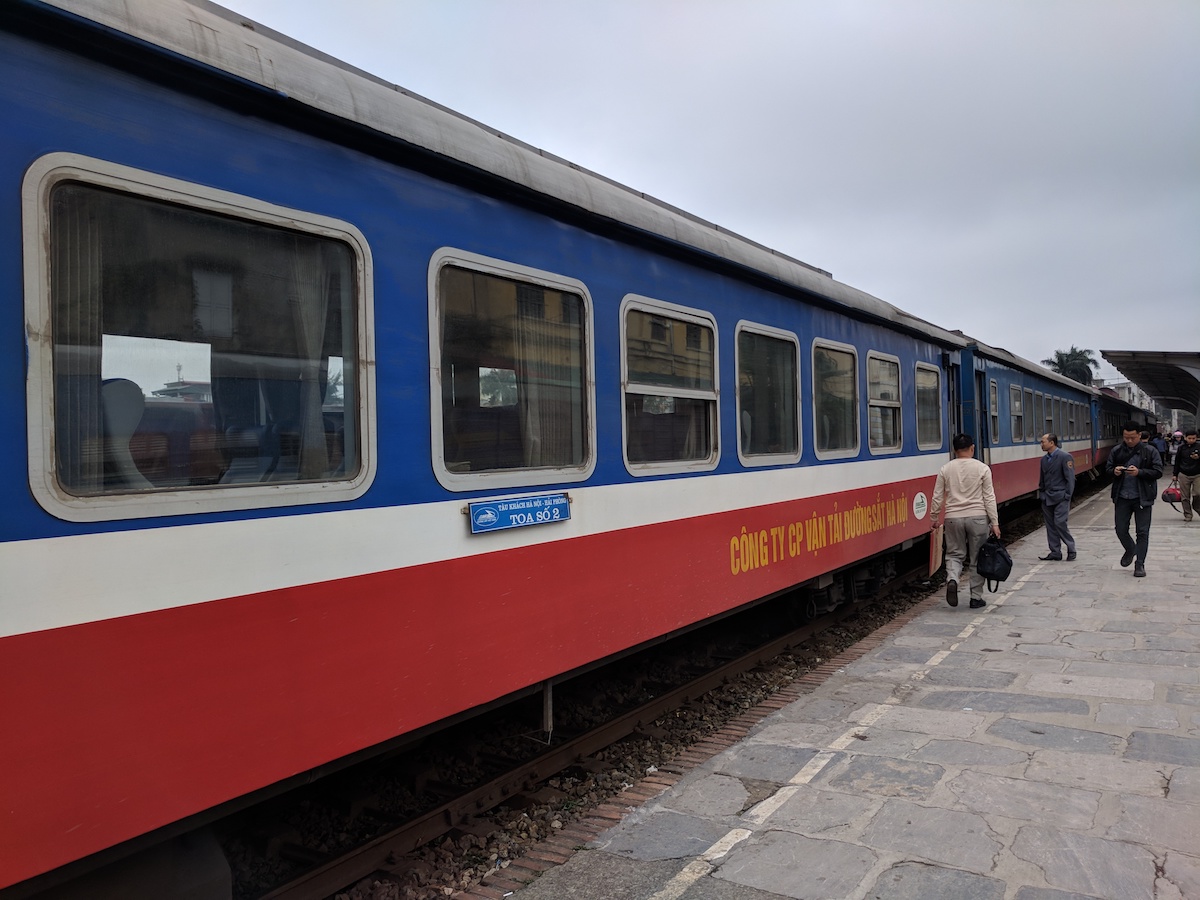 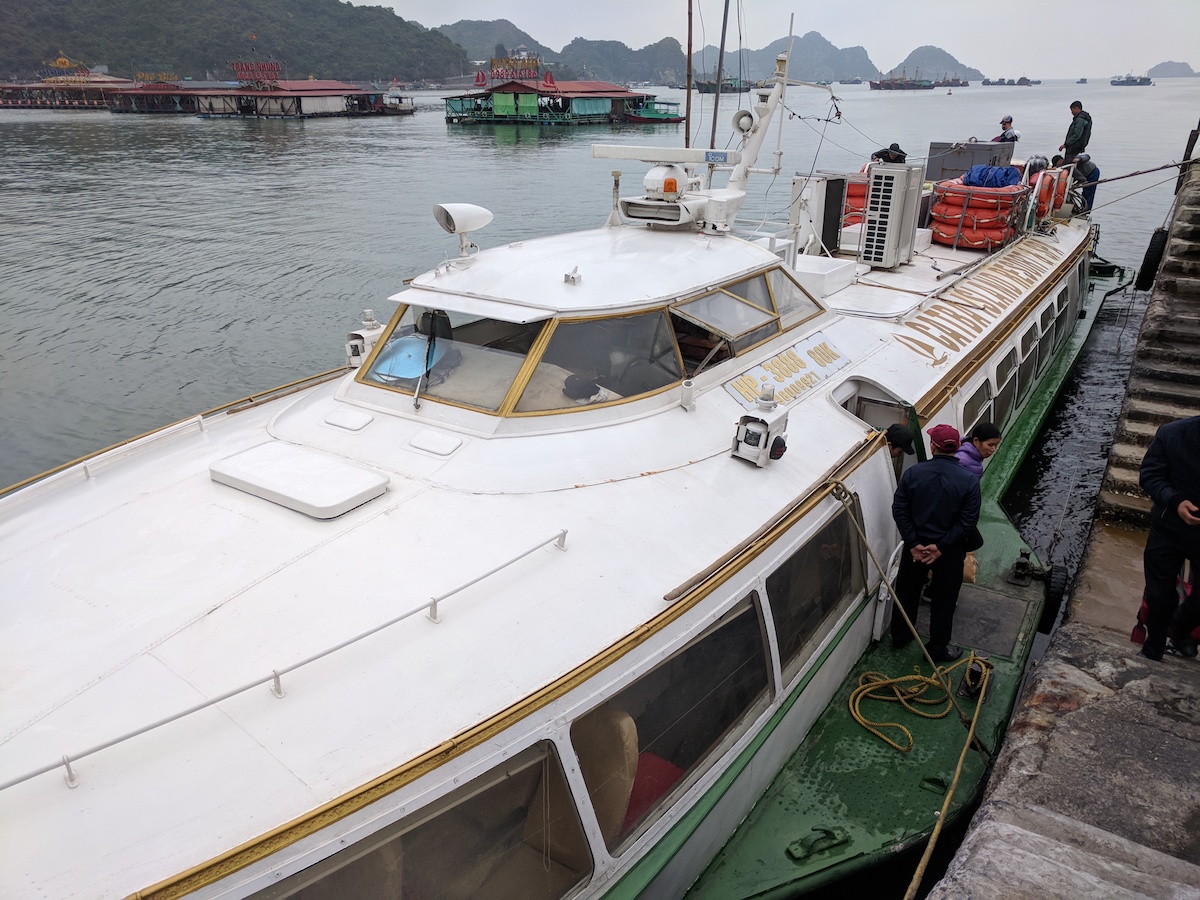 Left: Our train from Hanoi to Haiphong. Right: Our hydrofoil boat from Haiphong to Cat Ba Island.

The train trip was lovely, the train was nicer than Amtrak and left right on time. Other than one other backpacking couple the train seemed to be full of locals. The best part was that the tickets only cost 6 USD for the two of us.

Once we got to Haiphong, we had an hour before the hydrofoil we wanted to be on was scheduled to depart and enjoyed our milelong walk to the pier area. We could have taken a taxi but the walk really wasn’t bad.

We had read warnings in advance that there would likely be touts selling tickets for boats as we approached for less than the advertised price but to watch out because these were usually for boats leaving from a different pier and once you realized they would then charge a premium for a bus to the pier where your boat actually was. Just as predicted, there were two women standing in front of mini-buses selling boat tickets but we passed them by.

Then we arrived to the pier to find that all the ticket counters where we should have been able to buy tickets were empty. There were bags and coats that meant there were clearly people at work that day but they were nowhere to be found. At that point we still had plenty of time so we decided to grab some noodles for lunch and wait for them to get back. Five minutes before the boat was scheduled to leave there was still no sign of employees. There was a man selling tickets just in front of the counter though. Wary, Nate quizzed him about where the boat went, how long it was supposed to take, that the ticket was for the boat sitting right there, and that the price was the same listed. Without much other choice, we bought the tickets. Luckily Nate caught that the man had tried a common tourist scam, attempting to give a 10,000 Dong note as change when it should have been 100,000 Dong. We then walked toward the boat to find a small group of people (we assume the missing employees) sitting ready to take our tickets. Seems they hadn’t disappeared after all but were just out of sight enough for this other man to sell tickets (and try to make a profit with improper change?). Still, we got on the right boat going to the right place and we were able to walk to our hotel from there. Not too bad in the end. 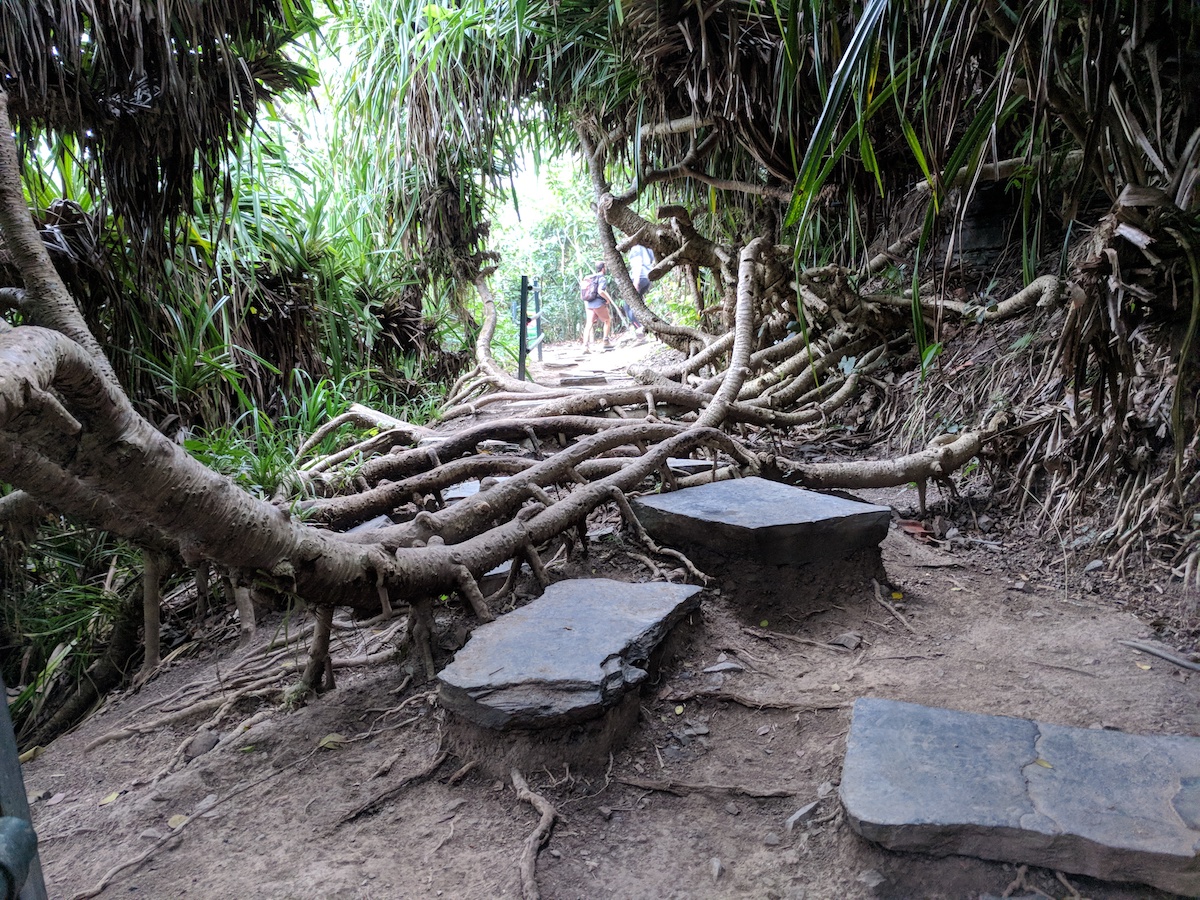 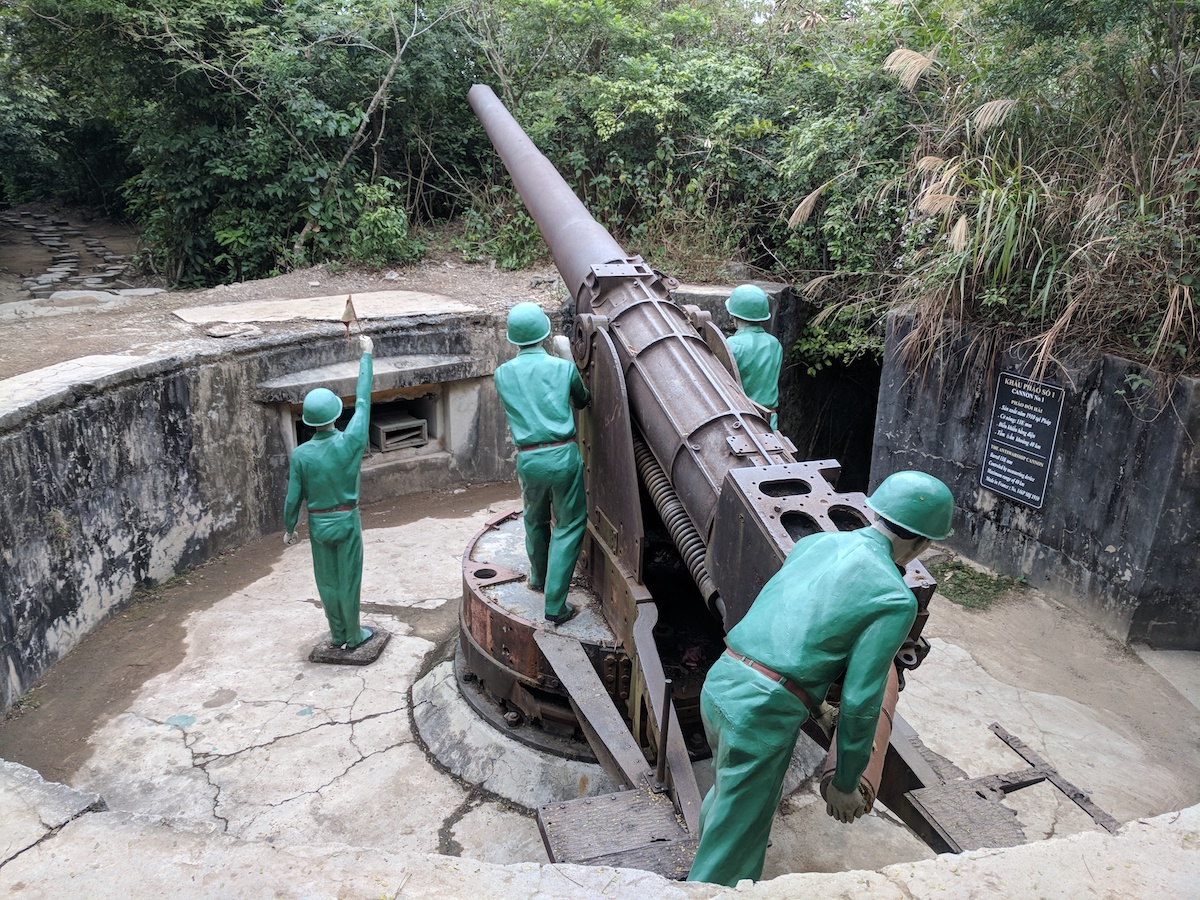 Arriving in the early afternoon gave us enough time to check-out the Cannon Fort in Cat Ba. We opted to walk up the hill (about 1.5 miles) rather than getting a taxi or renting a motorbike. The attraction value of Cannon Fort is pretty low. There are a couple of anti-aircraft guns with manequins acting out firing them, a museum of historical items like a telephone, canteens, and uniforms, and a tunnel you can walk through where they could take shelter from American bombers during the Vietnam War. But, from the restaurant you have a great view of the bay and surrounding islands. On a sunny day it would have been spectacular but even on our very overcast visit it was still a great view.

When we planned our time on Cat Ba, I knew we wouldn’t have very long but I wanted to get full value from our time. Admittedly, the picture I had in my head while I was planning our adventures was one of sunshine sparkling on bright green waters, swimming to cool off, and lounging on beaches. We also knew that we did not want to join a party boat. We saw several of them and did not regret our decision. Instead, I booked us a full day of kayaking with Blue Swimmer Saling in Lan Ha Bay. When I say full day, I’m not kidding either. We started with an 8am pick-up and we were tucked snuggly into our double kayak with skirts to keep us a little more dry by 9am. We didn’t get back until after 4pm. Granted we stopped for lunch and for a couple of breaks but mostly we kayaked.

The views of the limestone islands from the kayak were amazing, even without the sunshine. The water was a bright green color in most places and we were able to peak into caves and pop into peaceful lagoons along the way. While there was definitely trash in the water (so many plastic bottles) there were only a couple of areas I noticed oiliness at the surface of the water and it was far better than what I had expected based on reports from Ha Long Bay. 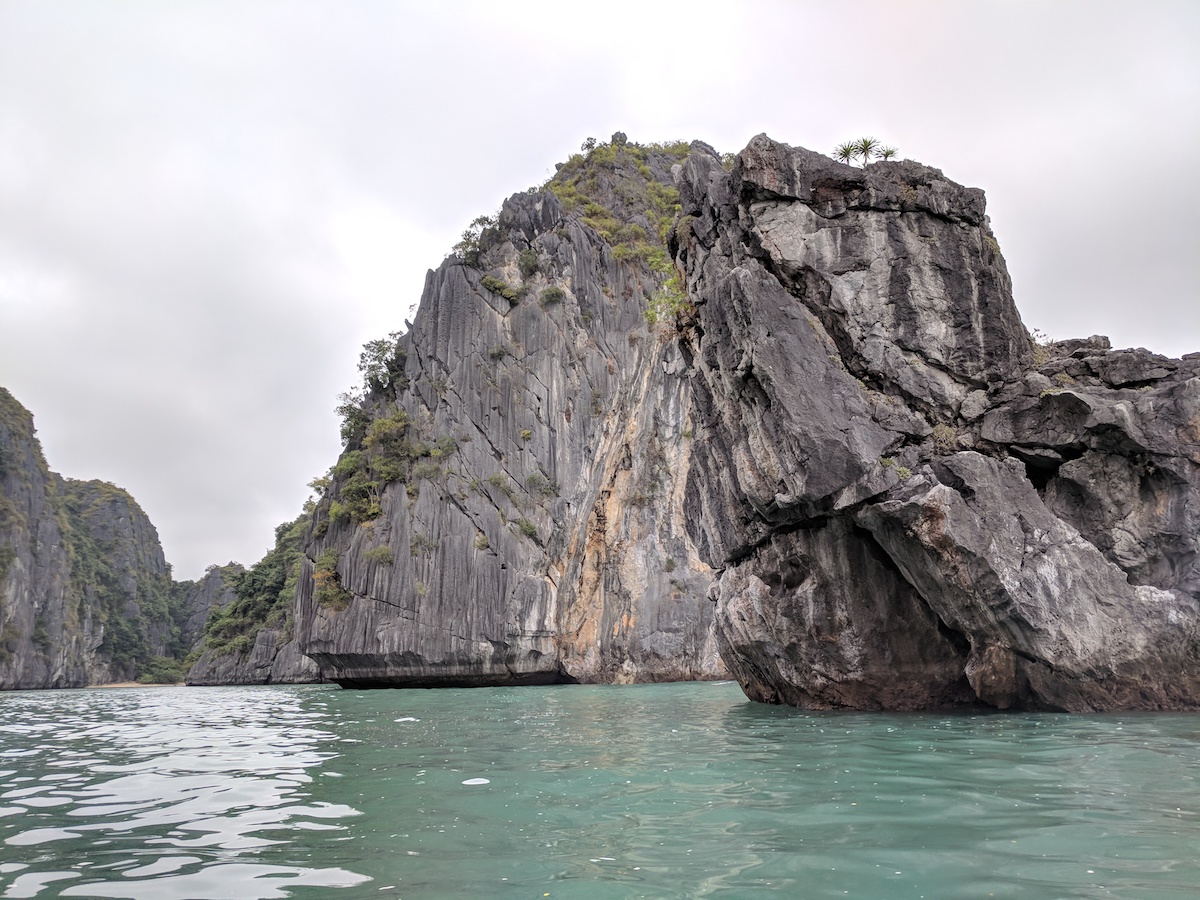 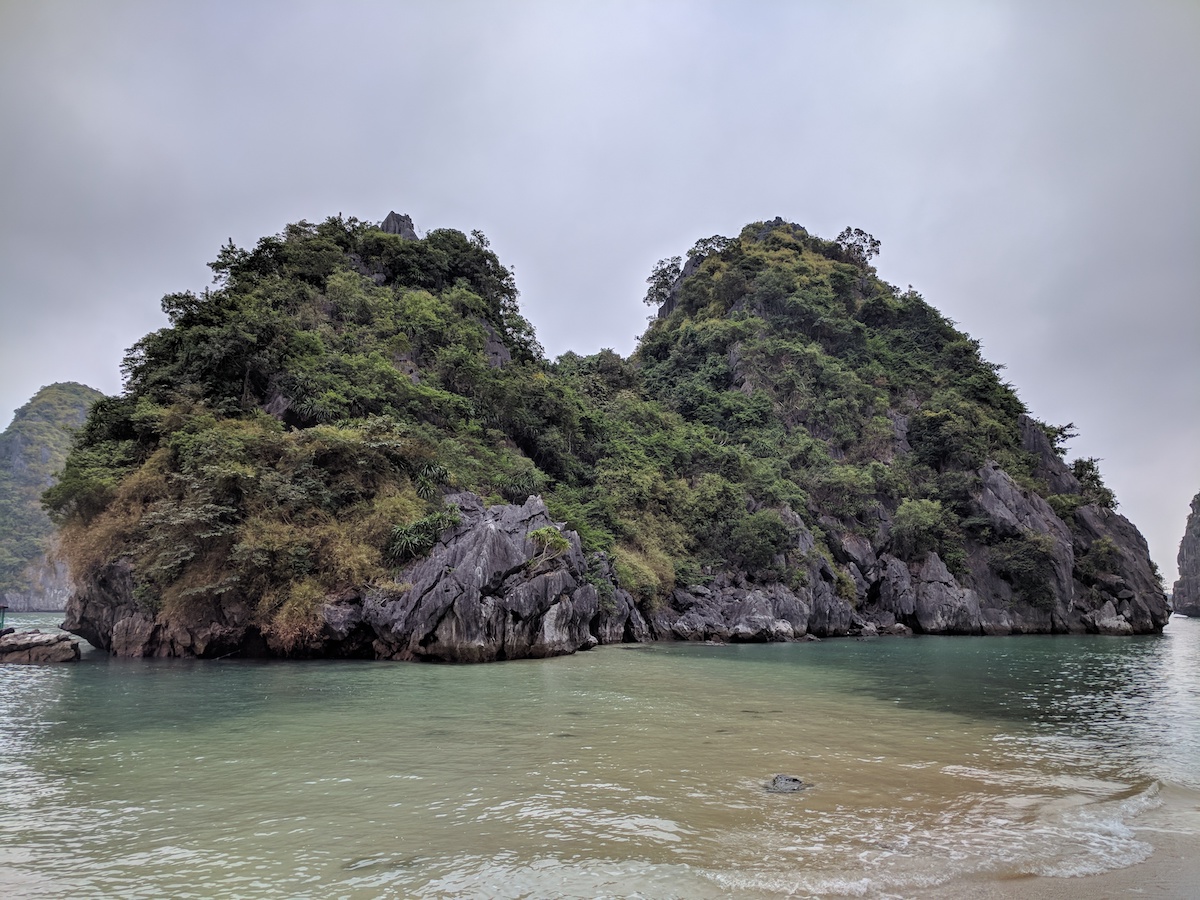 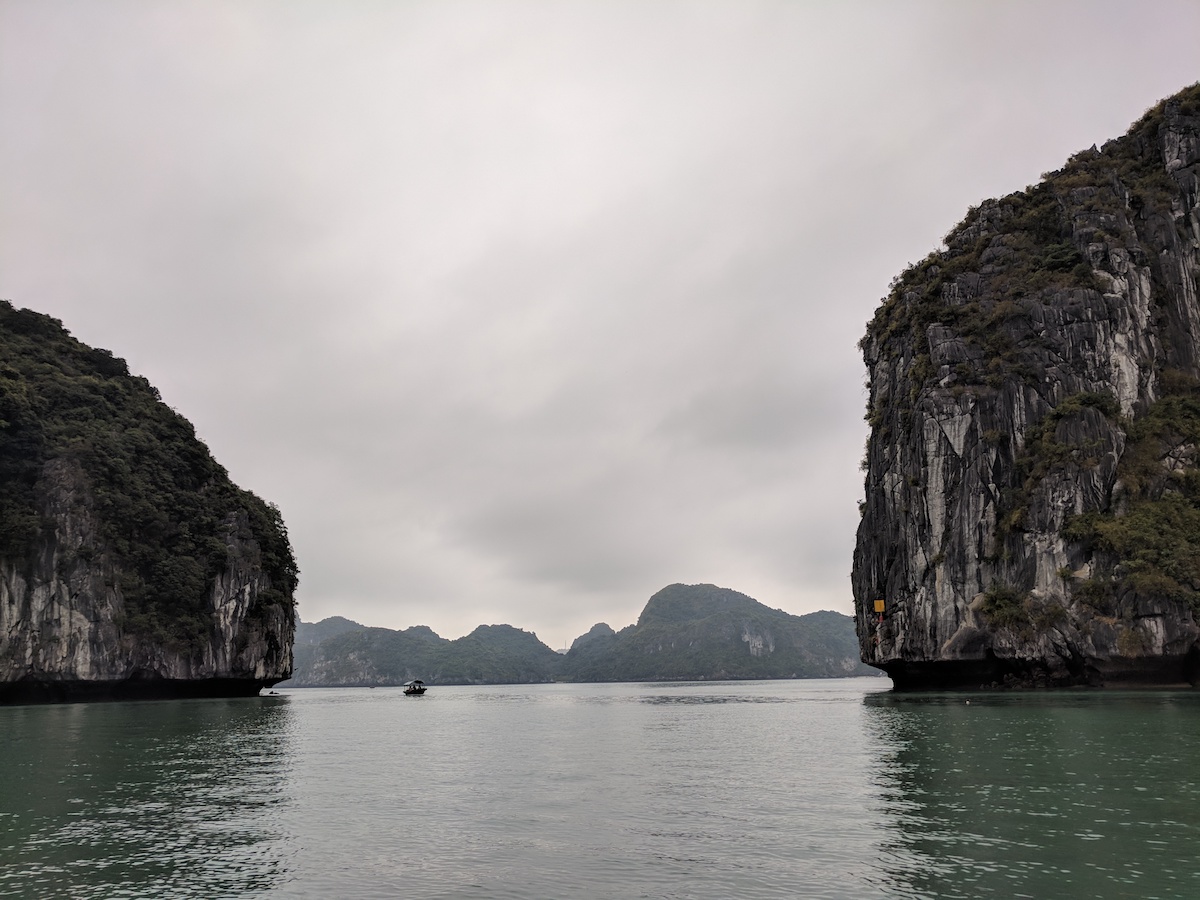 Scenes from our kayaking around Lan Ha Bay.

We also got to paddle by some fish farms, watch some fishermen collect and wash clams to be taken to market, and visit a little resort with a beach for some lunch and relaxing.

I’m glad we didn’t just hire a day-trip on one of the many boats. Being close to the water and having more flexibility to linger was great. I do wish I had picked the half day boat cruise with half day kayaking though. After our 8 hour adventure, my arms were so sore I could barely use by chopsticks to eat Pho for dinner. I wish I could say I was exaggerating when I say my arms have never been so sore. It was definitely too much kayaking for us. 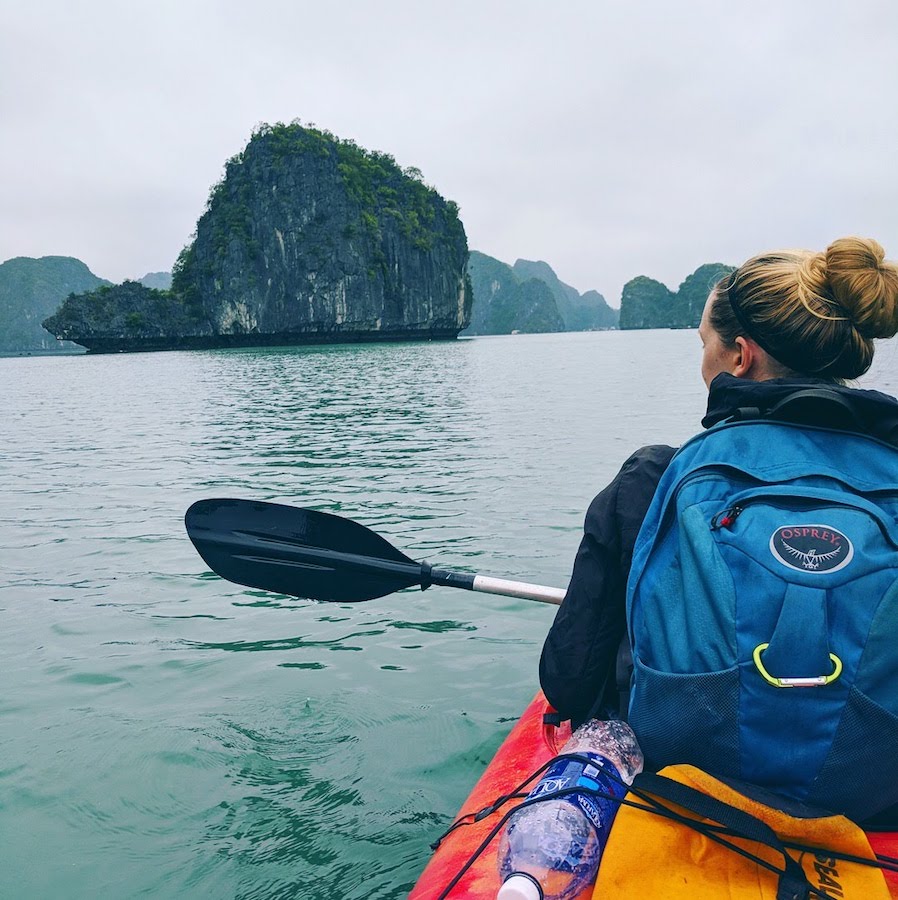 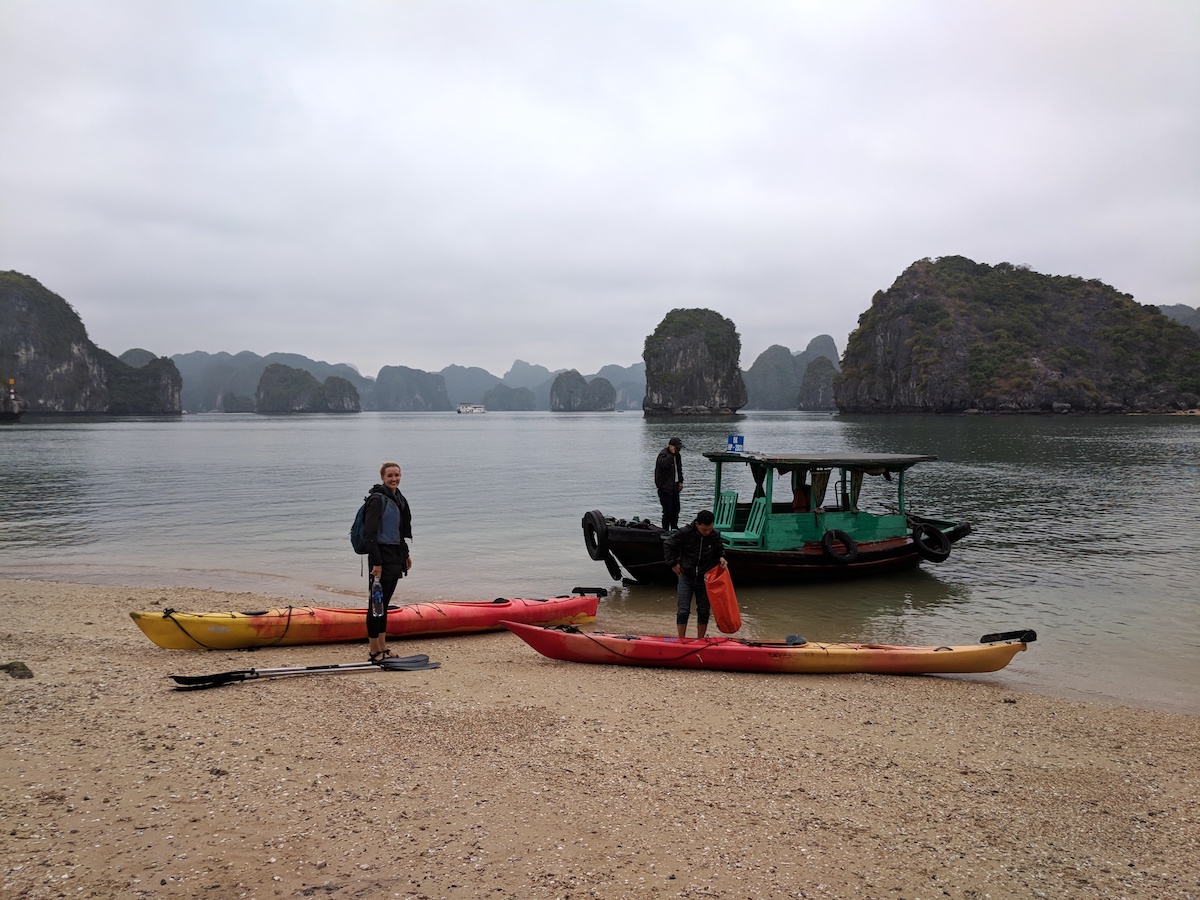 Even though we enjoyed our trip to Cat Ba on the public train, we had to take a transfer service back to Hanoi. The hydro-foil timing and the train timing were such that we would either have to make the switch in Haiphong in under 30 minutes or spend at least 3 hours there waiting for our train. Since we were leaving again the same night on an overnight train to Hoi An, missing the train to Hanoi was not a good option. So, we the Good Morning Cat Ba transfer service for 16 USD per person and got back with plenty of time to get some more tasty food, try an egg coffee (highly recommend, even though I usually prefer unsweetened coffee), and still make our train.

« Hanoi: Welcome to Vietnam
Hoi An: A Relaxing Break »